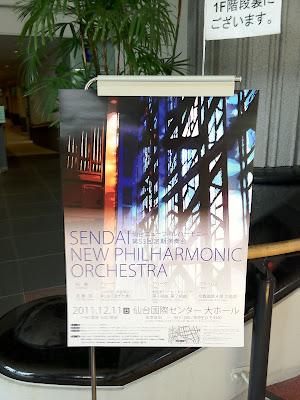 This weekend, I went to Sendai by car. It was a long drive after a long time and it was a very exciting trip.

So, I’m going to write my diary in several parts. I tried to write it in chronological order, but it was difficult, so I’ll just write it as I think of it without worrying too much.

I think it’s easier to write about this topic at first.

One of the members (a double bass player) who lives in Sendai is a member of this orchestra, which we started up through twitter last year and this year.

Well, to be honest, it’s far away from Sendai, but I thought it would be interesting to go there just for the sake of it, and it was just a small motive at first.

But of course, that’s not the only reason.

This orchestra was supposed to have a concert in April this year, but they couldn’t perform for a while because of the earthquake on March 11.

However, despite this, they resumed practicing early in May, and the concert was held on December 11.

I hadn’t been able to get in touch with them for about a week after the earthquake, and I wondered if everyone who was here at the time had already lost their lives…

It’s been only eight months since then, but he’s still playing his instrument in the orchestra, and he’s asking me to have a drink with him after the GP (the day before).

I have a stronger desire to go there.

Well, my overall impression of the concert was that it was just an ordinary amateur orchestra concert.

It may not be good for me to say this, as I am not the person involved, but they are really giving a “normal” concert. I’m sure there must have been people like the double bass player who had a very hard time.

And yet, everyone is enjoying the concert as usual.

Then again, the show started at 3pm….

It was December 11th, the ninth month since the earthquake.

Usually the concert starts at 14:00. So people usually think that you’re going to do something when the time comes, right?

There was nothing special about it.

The concert was normally held at 3pm.

So, although the performance was very nice, it was not overly exciting, and I was able to listen to the performance in a very comfortable way, just as I usually do when I listen to my friends’ concerts in Tokyo.

After the show, I walked up to the stage and greeted the performer, who said, “As you can see, Sendai is back to normal, so please come and see us again.

Even so, it was only about a month or two ago that he was able to get paid freely…

Since the big concert was over in the summer, this autumn is rather an off-season for the group I belong to. That's why ...

I’ve taken the liberty of guessing the size of the amaoke market.

I suddenly became curious about it, so I made my own assumptions and did some calculations.Here's what I've concluded.「T...

I'm in Vienna. That's to listen to the New Year's Concert by the Vienna Philharmonic Orchestra, which I won in March thi...

Orchestra Valse – Mainly the music from “Castle in the Sky

The date and time of the concert have been decided.子供の頃から慣れ親しんできたジブリ音楽をオーケストラで演奏したいと思ったことはありませんか？ ジブリ音楽は市販されているオーケストラ譜が少...
You can finally see traffic conditions on Google Maps!
Off Sendai Part 2: Dinner
Home
05. Music
Copied title and URL