The “Impressionist Festival” and its other main objective.

To Sainte-Mère-Eglise, the site of the first full-scale operation in the Normandy landings

On our second day in France, our first stop was Sainte Mère Église.

World War II is a very familiar war for Japanese people, but even so, the European front is surprisingly little known. However, there are probably many people who have heard of the “Normandy Landings” at least by name.

This operation was a large-scale operation conducted by Allied forces in June 1944 at the end of World War II to take France, which was occupied by Germany at the time. In Japan, it is generally known as “Normandy Landing Operation”, but overseas, especially in the United States, it is usually referred to as “D Day” or “Operation D Day”.

Le Havre, where I was staying the day before, was the same, but this area has been destroyed by many wars, so there must be few places where the beautiful townscape from the Middle Ages still remains.

Well, this is where Sainte Mère Église is located. It’s a small town on the Cotentin Peninsula, jutting out into the English Channel (Manche Channel).

This area was the first landing site of the Normandy campaign, and Sainte-Mere-Eglise was geographically close to the center of the city, which was also the base of the German army.

We came from Le Havre, where we stayed the night before, at once almost non-stop. It was an expressway (speed limit 130km/h) and a motorway (speed limit 110km/h), but from the middle of the way it was a public road.

It is a parking lot, but it is not possible to park near the central square with the church for a small town. I had no choice but to park on the street near the exit of the village. Even though it is July, it is still a little chilly around 9 am. I wore a T-shirt and polo shirt underneath, but I still needed a jacket at this time.

The church where one of the parachutists got stuck.

The city is famous for being the site of the first major battle of D-Day, but what makes it even more famous around the world is the city’s church. 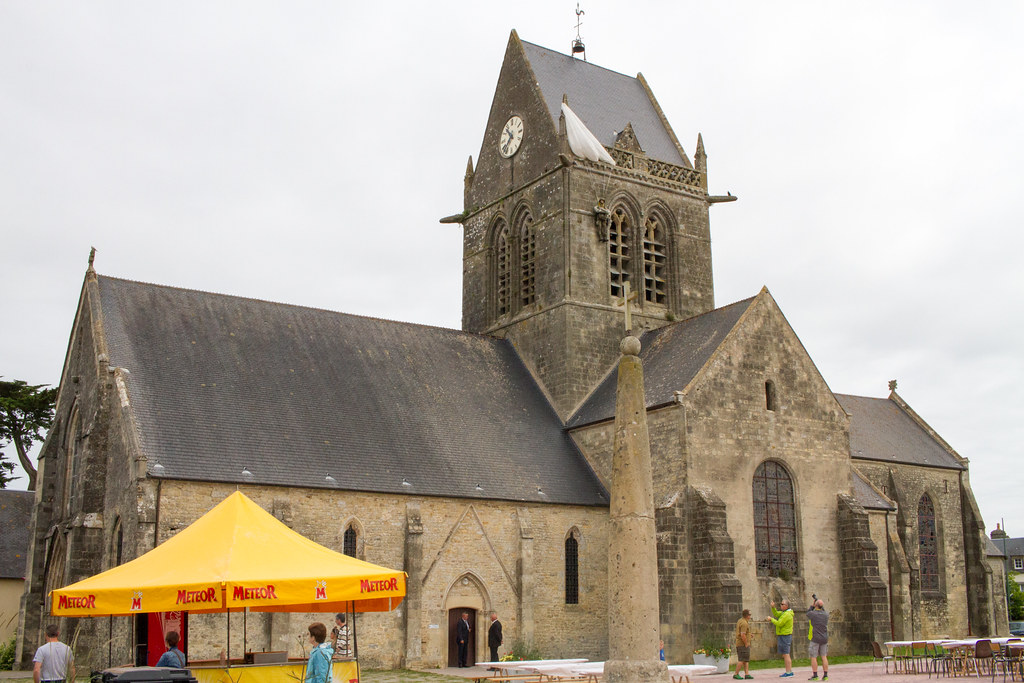 At first glance, this church looks like any other church in the French countryside, but if you look closely at the top of its steeple, you’ll see something. 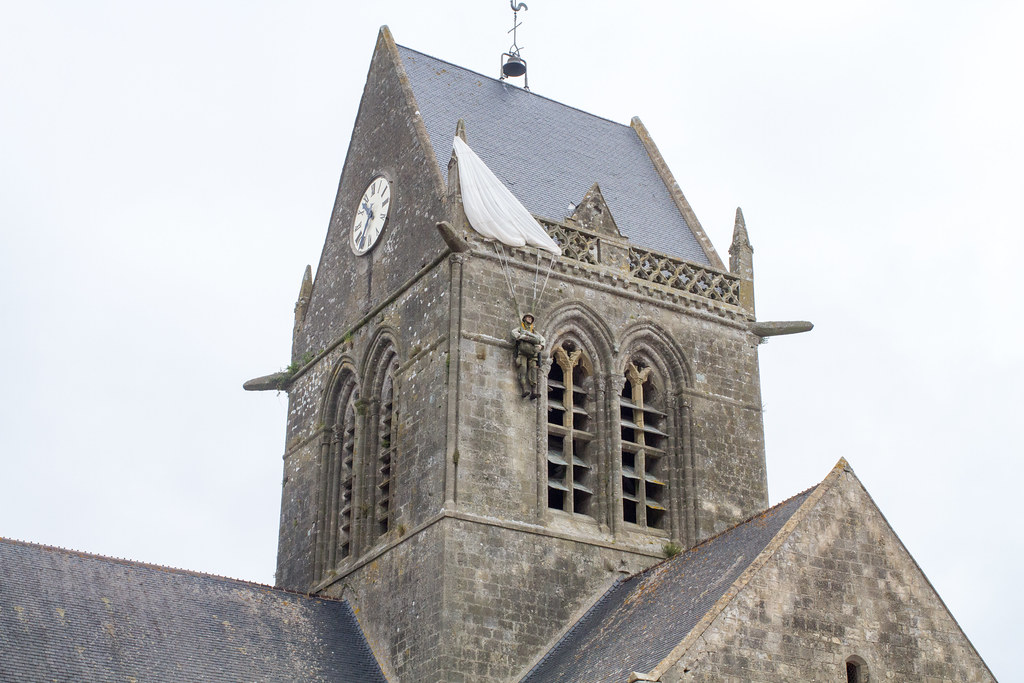 The landing operation was carried out in the early hours of the night, and in the pitch darkness, a member of the team in a plane that took off from the other side of the English Channel landed here, and got caught in the steeple of this church. In the end, he could not get down from here by himself, so he pretended to be dead and stayed there for a long time while he was stuck on this church.

In the end, the parachute decayed and finally fell, and the German army found him at that time. When I think of the fact that many other parachute troop members could not even become prisoners of war and were killed, I can only say that they were very lucky.

That’s why this mannequin was made to commemorate him. The mannequin was made in 2006, so it seems to be relatively recent. Seeing the mannequins is the purpose of coming to this village, but tourists from all over the world come here to see them, just like me. I think it might be a successful example of village revitalization.

In addition, there was an explanation near the church, but when I read it carefully, I found that it was not about the parachutist who got caught, but only about the outline of the operation of this parachute unit and its leader.

Their mission was to land in the outskirts of Sainte-Mère-Eglise in what was known as the O Zone. They were to take and hold the Fiery Bridge west of the village, and this man was wounded by a gunshot but returned to the field immediately after being hospitalized for 50 days.

The Airborne Museum is well worth a visit.

By the way, I initially came to this place only for the parachute stage mannequins of Sainte-Mère-Eglise, but suddenly I found a museum related to the Normandy landings called Airborne Musium in front of this church. 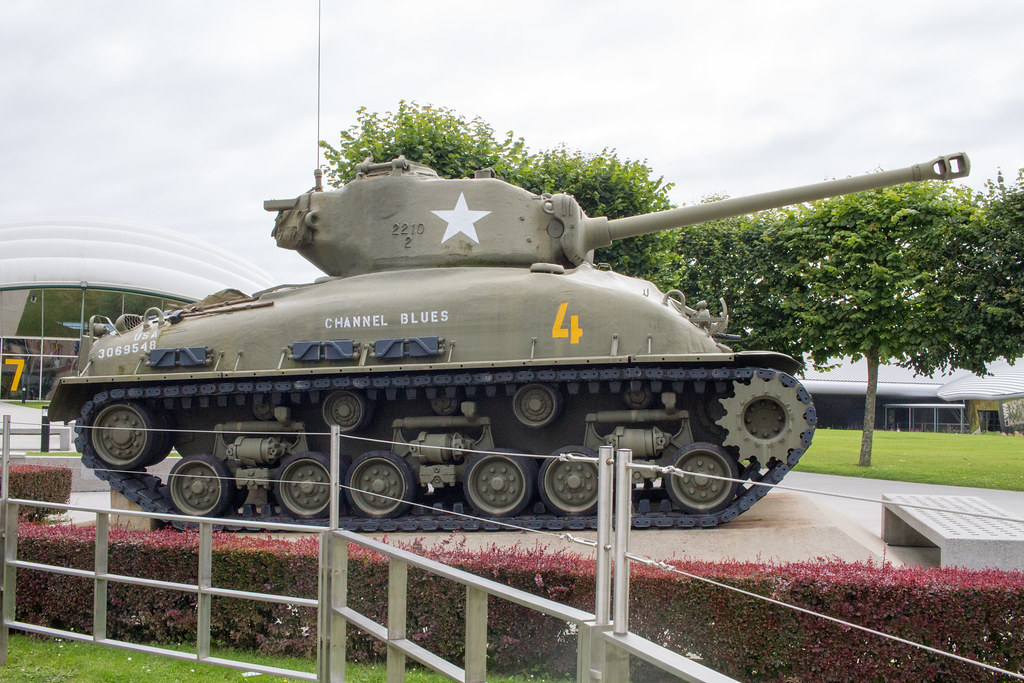 There are some panels here and there in the town that describe D-Day, and they seem to be supervised by this museum.

It seems to have a high reputation when I briefly examined what it is on TripAdvisor. I decided to visit because I was so excited.

When I went inside, I was surprised at the rich exhibition. It begins with the exhibition of the personal belongings of the soldier of that time. 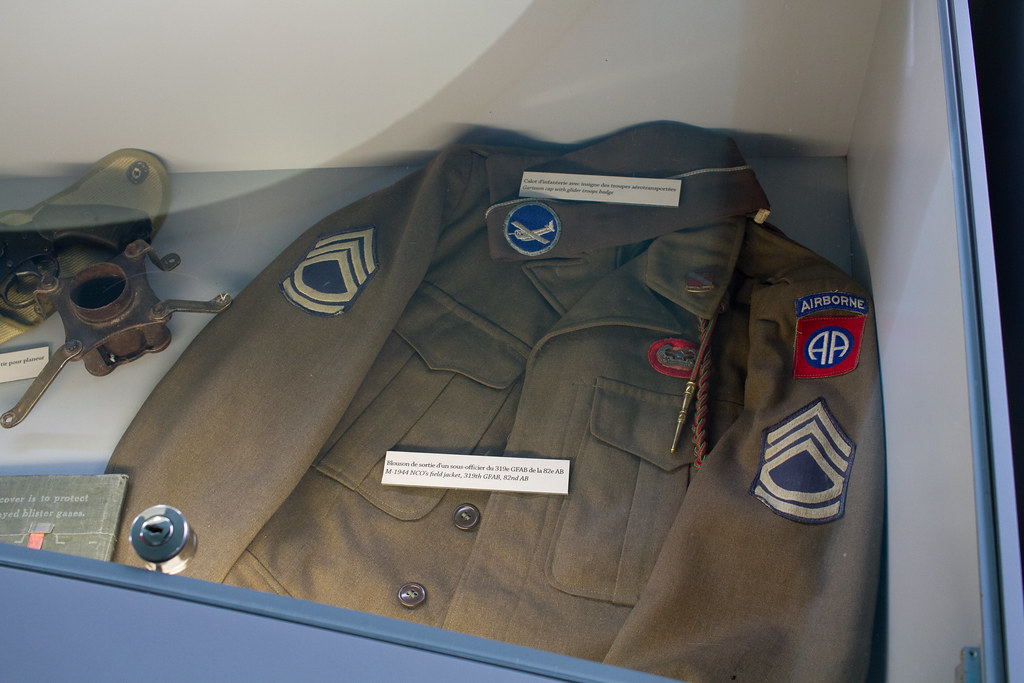 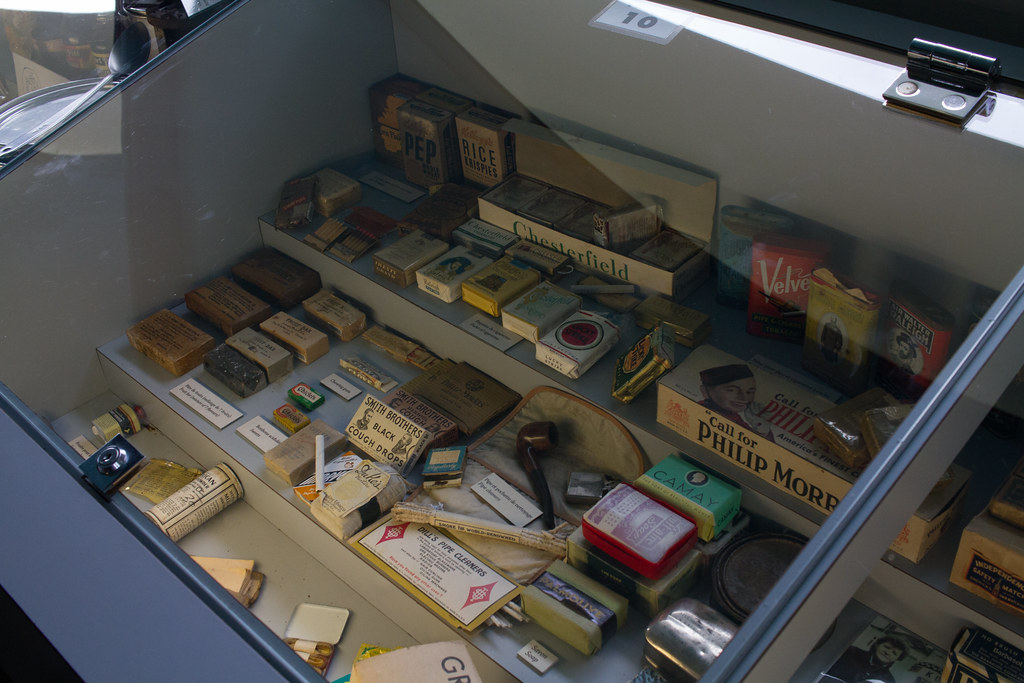 Incidentally, the luggage that each soldier carried at that time weighed about 40kg. That’s a lot of work.

There are panels describing the specific circumstances of its creation, and commentary in French and English.

Western museums keep such records well, don’t they? However, this museum was built by the victorious side. I wonder if this is not the case in Germany. I am curious about it.

Replicas of airplanes used in operations at the time are also on display. Is this the plane of the parachute troop? 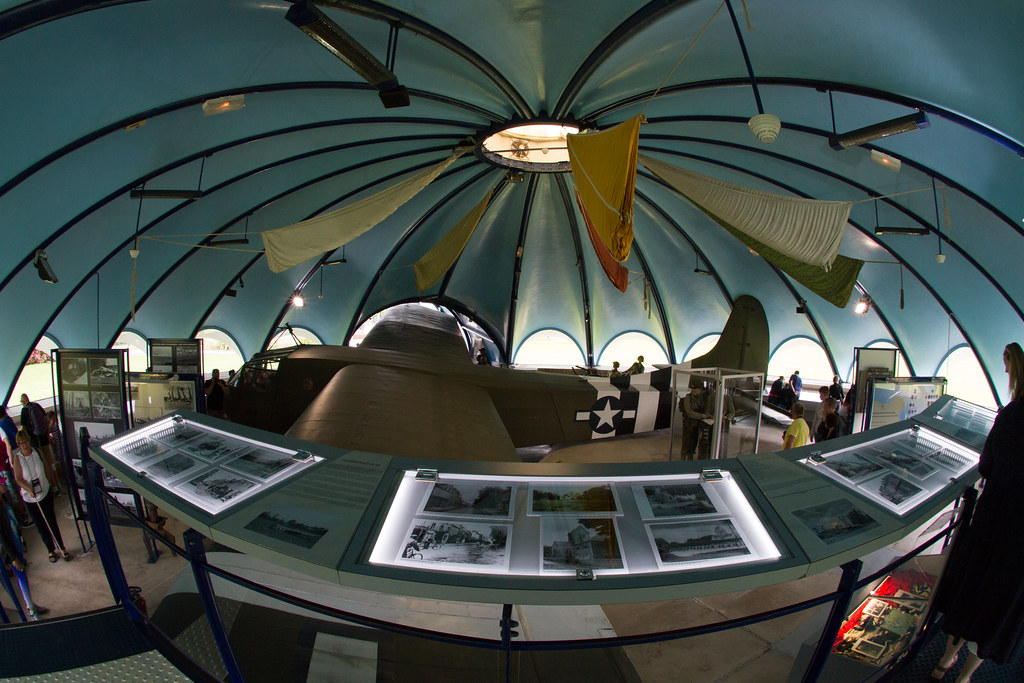 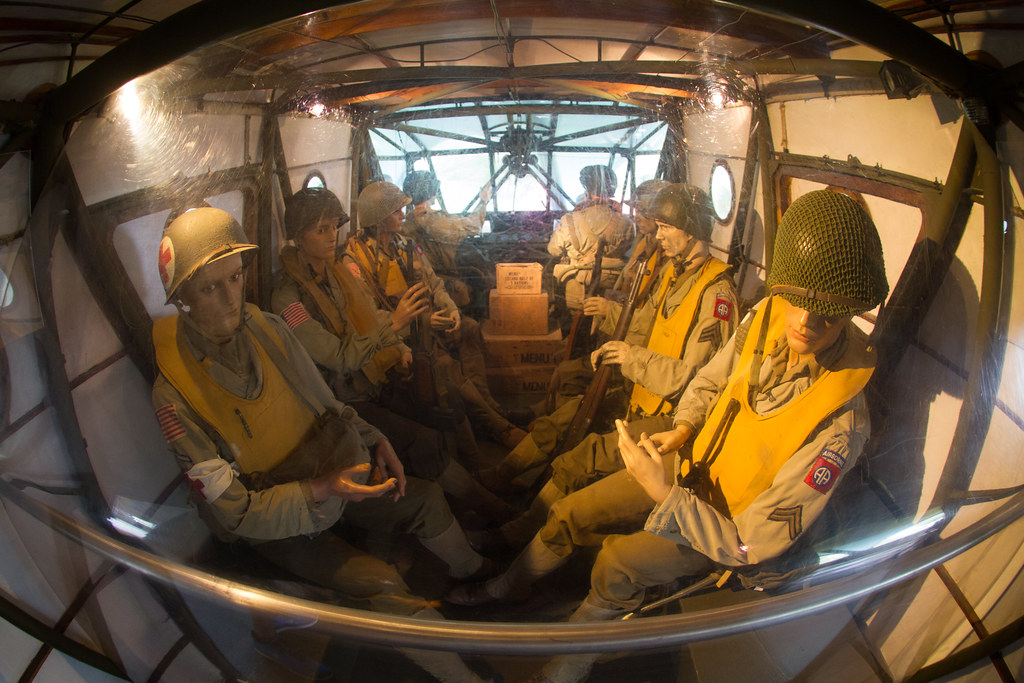 At the entrance of this floor, there is a panel like this. You can see at a glance the strategy at that time and what route they took to land in Normandy from England on the other side of the river.

There were two places with replicas of airplanes in total, but I think the one in the exhibition hall we visited next was bigger and more impressive. 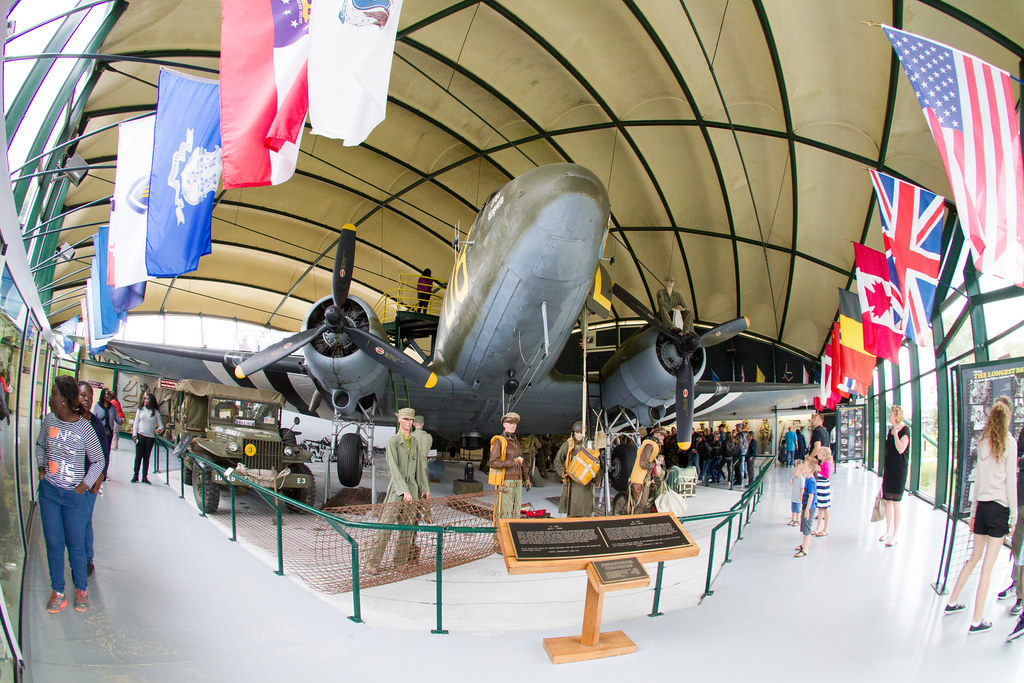 Is it my imagination that I thought the exhibition was somewhat American? 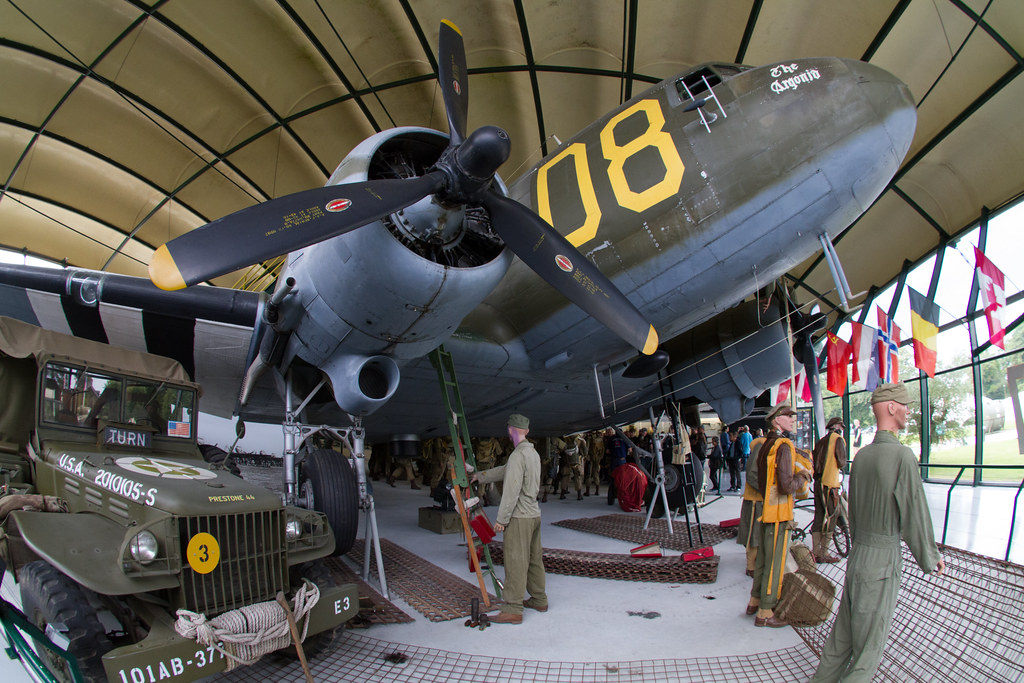 In addition, it seems that there is an attendant in each place and they guide you. On this day, they seemed to be guiding in English for visitors from English-speaking countries. 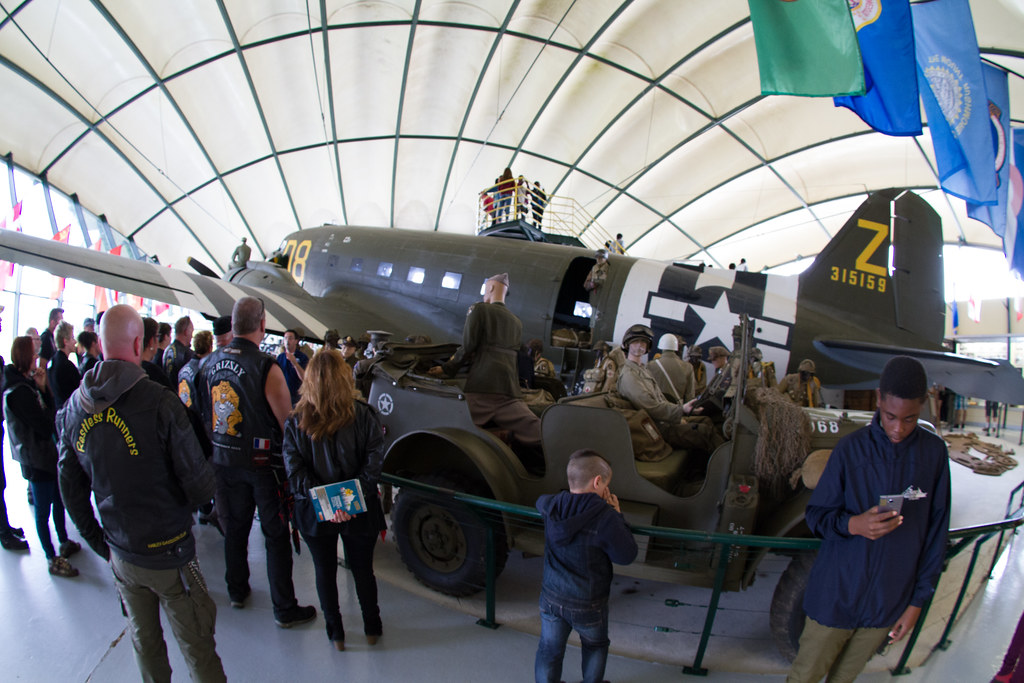 By the way, we could climb up to the top of this airplane. I think you can see how people are listening to the guide’s talk seriously. 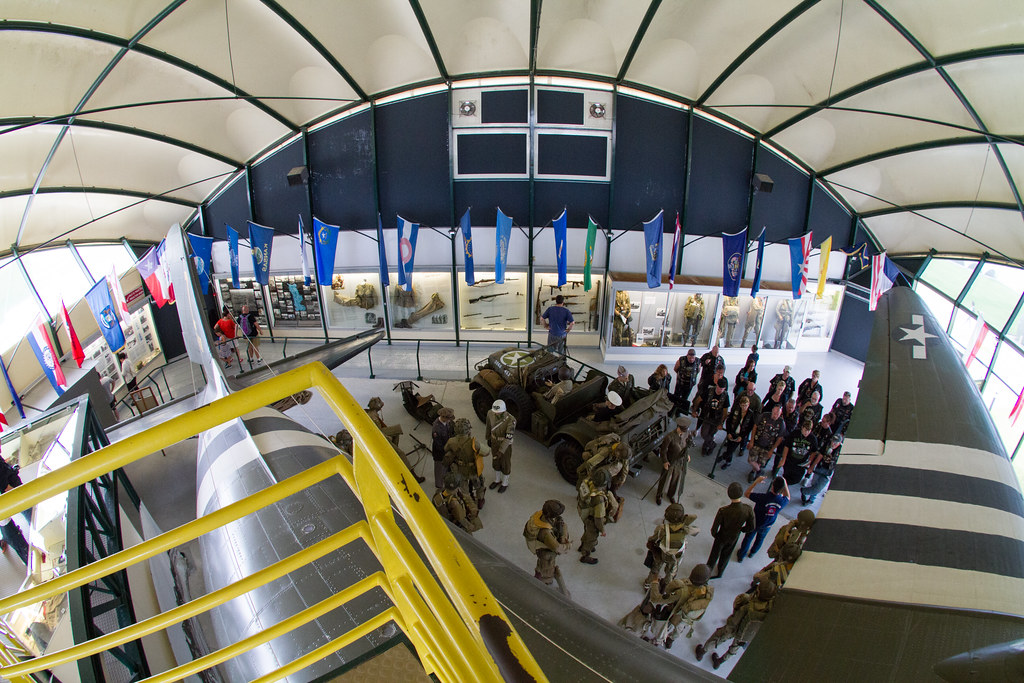 Finally, we went to another exhibition hall. The pattern of the submarine unit and the parachute operation which was carried out in the middle of the night was introduced here. It was too dark to take a picture. And finally, I saw the exhibition of the further details of this operation and how the war situation was reported at that time, and the appreciation ended.

Except, hey, America did it! American hero! feeling, but it was a wonderful and very substantial museum that tells us about the situation at that time very carefully.

Looks like it passed at the Tour de France 2016!

By the way, this is the city hall of Sainte-Mère-Eglise, and if you look closely, you can see the pictures of cyclists who decorated the Tour de France numbers. 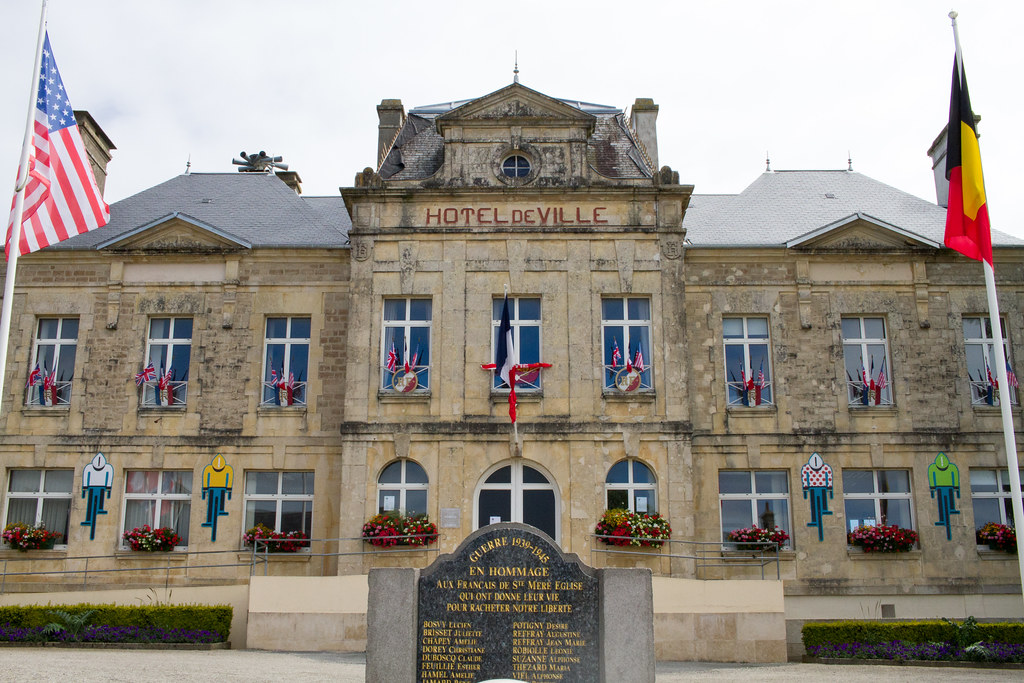 Apparently, this city passed the first stage in 2016.

By the way, I just found out from the official website of Tour de France that there was a museum in Utah Beach. On the first day of the Tour de France, I was satisfied with Utah Beach and Omaha Beach (which I will introduce next time). Utah Beach, I hesitated to go there because of the time, and I quit after all… Oh, I failed again. I guess my search ability is just not good enough.

However, as is the case every time, when I come back to Japan and look back on my trip by writing a new blog, I realize that I missed a lot of things.

Visit Date: September 25, 2017It's been almost two years since my last trip to Switzerland and France. More to come.Char...

Saint-Bertrand-de-Comminges – Tour of the most beautiful villages in France 2013 No.5

Schengen, a city on the border of three countries – 2011 France – France

Date of visit: May 1, 2011, around 1:00 p.m.There are still a few more in the series except for the most beautiful villa...
July 2016 – France “Impressionism and Gourmet Travel” Chapters 1-6: Impressionist Festival Andre Malraux Museum in Le Havre
Duolingo’s artificially intelligent French chat is quite interesting
Home
July 2016 France Impressionism and the journey of gourmet
Copied title and URL