Of all the castles in Europe, this might be my favorite.

Just 10 years ago, in 2006, was the year I started driving in Europe for the first time. I rented a car at Charles de Gaulle Airport, stayed at Barbizon, and went to Vaux-le-Vicomte Castle the next day. This visit was the first time since then.

As always, check the location. It is located just north of Fontainebleau, which I visited just before. It was about 40 minutes away by car.

From Paris, you can take a train from Gare de l’Eto to Verneuil Letang, and then a bus from there.

More information, including a shuttle bus, can be found on the castle’s website.

If you are visiting by car, the town of Melun in the southwest is a good place to start. After leaving this town, take the national road to the northeast, go about 2km and turn right at a small alley. It is a little difficult to enter here, but you can’t miss it because it is a road leading to the castle. You will arrive at the castle by following the small road for about 1km.

It’s also full of charm on the outside.

The parking lot is located on the north side of the castle and is free. This is the back side, and the entrance to the castle is on the right. Let’s head there first. 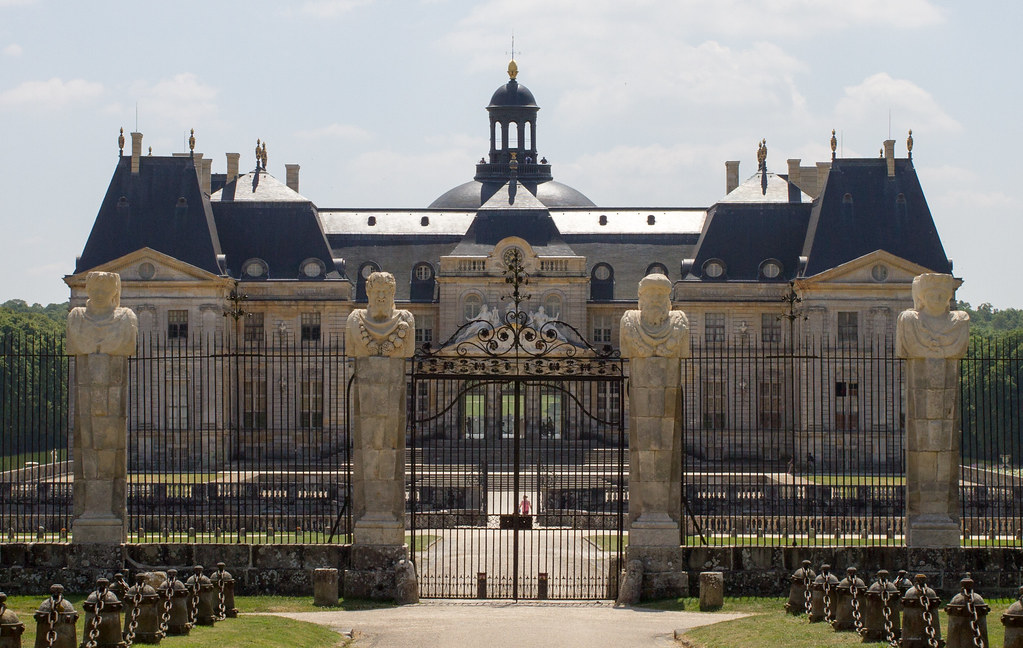 You can buy tickets at this building (we climbed up to the coupola in the castle to take pictures later). There was also a wide range of souvenirs. 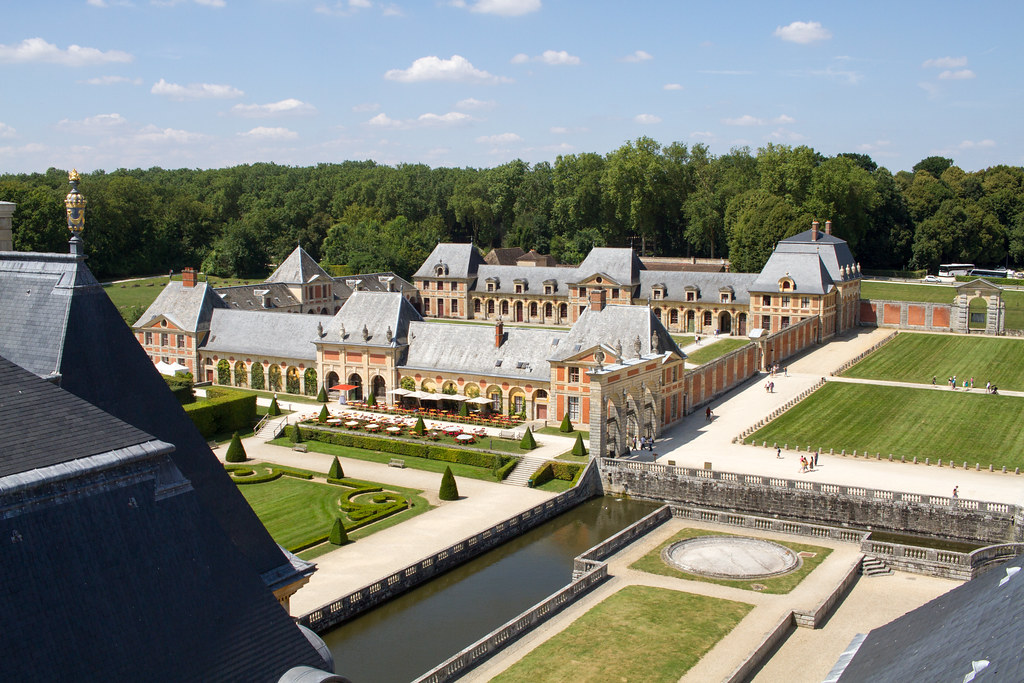 Now, I’ll write a brief description of Vaux-le-Vicomte Castle based on the information in the brochure and on the website.

The castle is considered a masterpiece of early French Baroque architecture, built by Nicolas Fouquet, a minister of Louis XIV at the height of the French absolute monarchy, who invited the best artists of the time, the architect Le Vau, the painter Le Brun and the landscape gardener Le Nôtre. Construction was completed in 1656 and five years later in 1661.

It’s also full of charm on the outside.

This is the north side. You can enter the garden from the right side of the direction of travel, the east side of the castle. 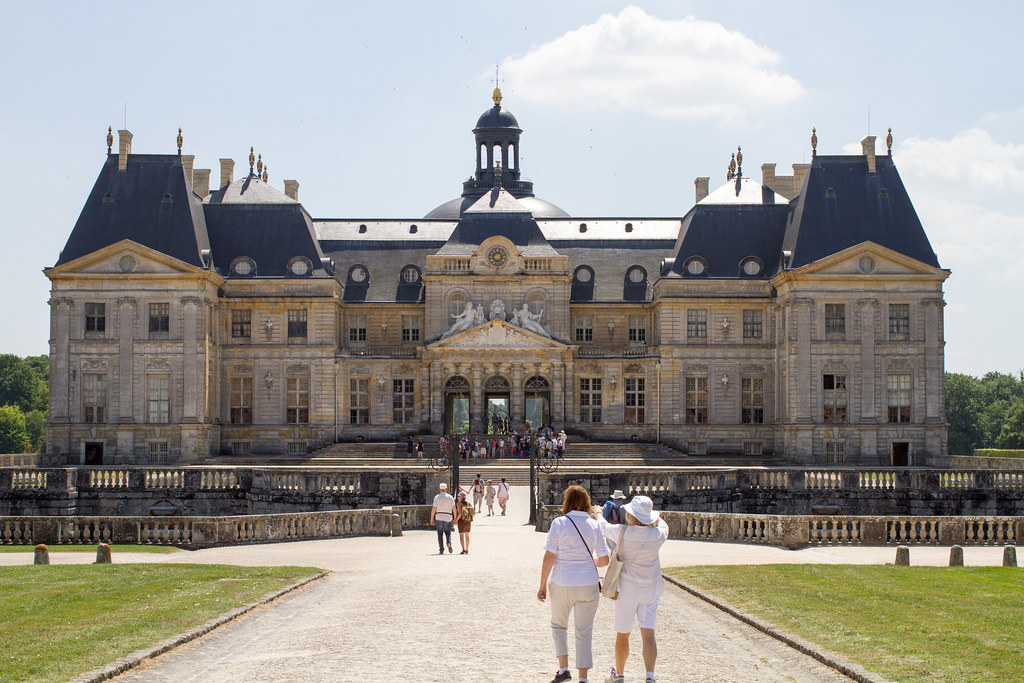 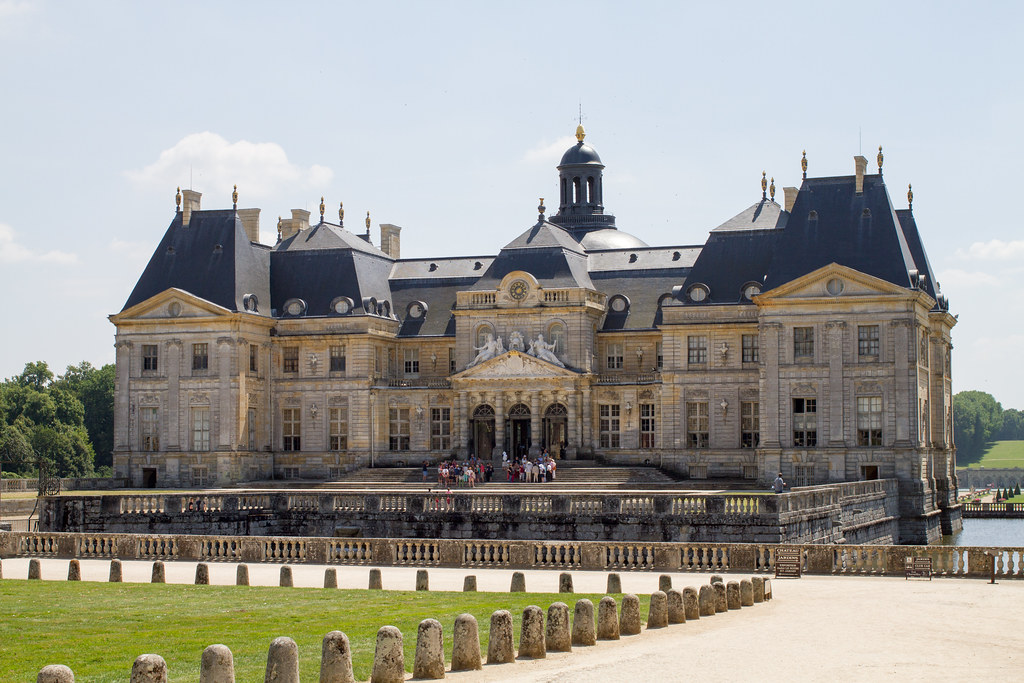 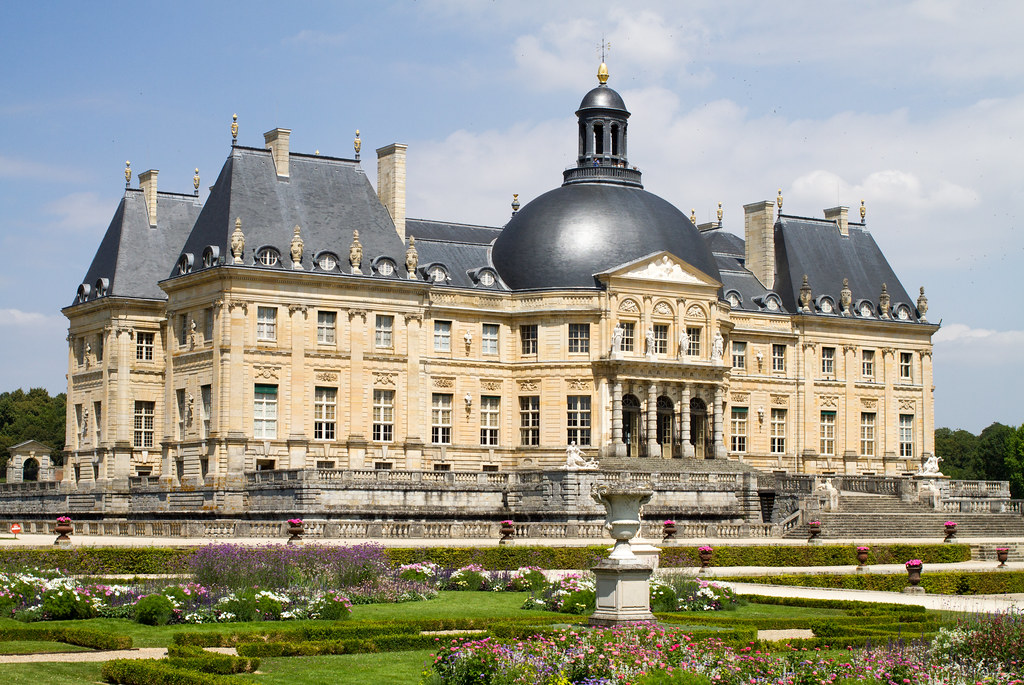 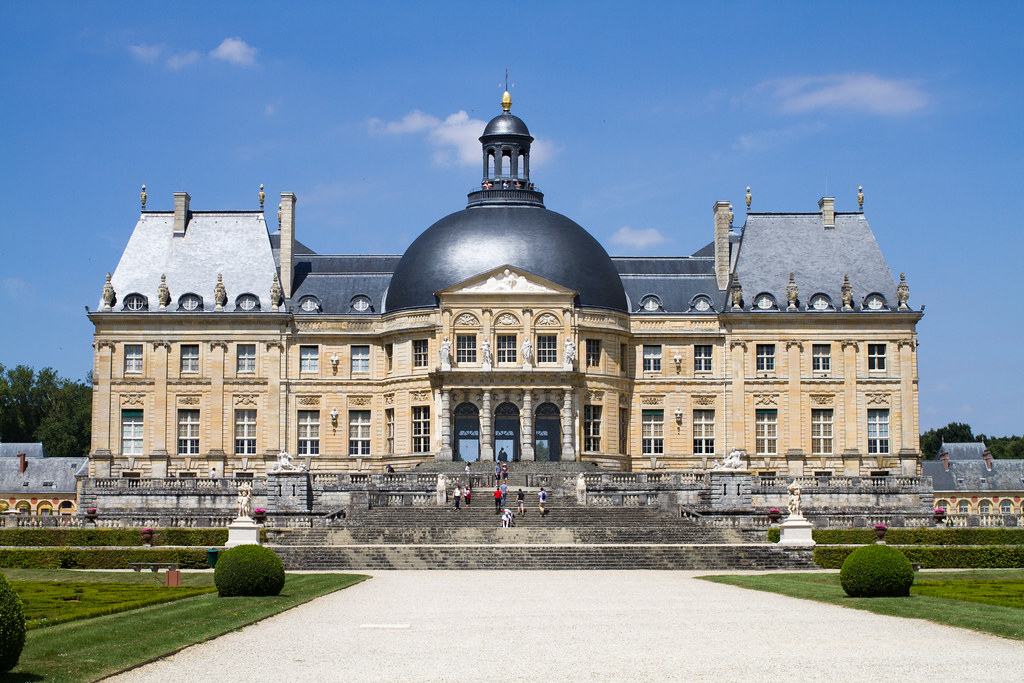 The inside is also full of charm

Fouquet was a great art collector, so there are many wonderful paintings and tapestries all over the castle. There is a rumor that Fouquet embezzled some public funds. 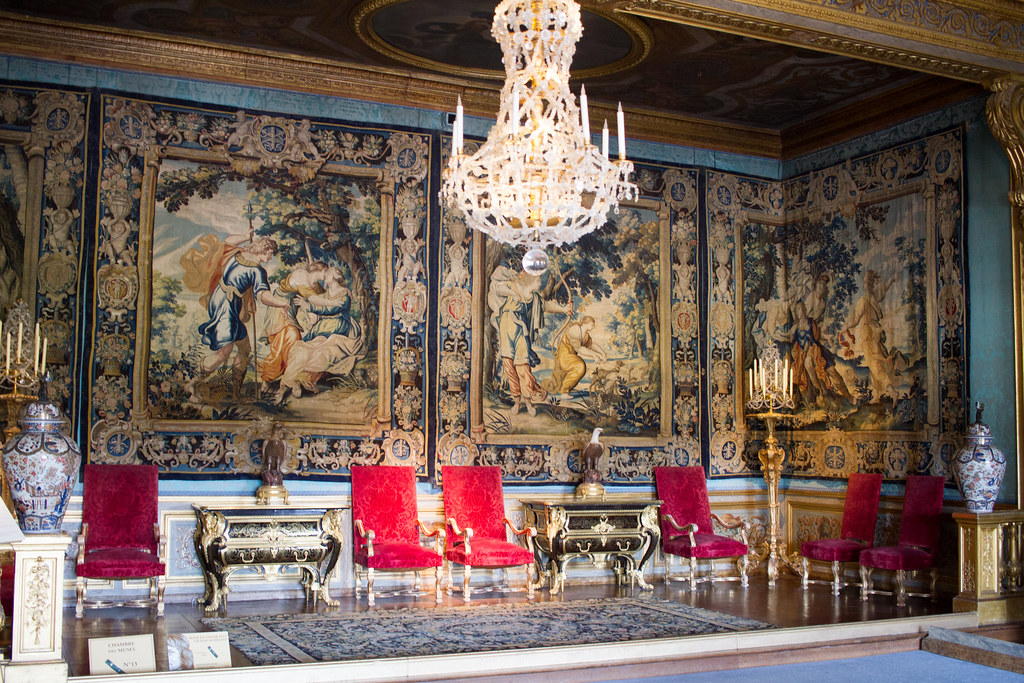 I took a picture, though, of this (probably) picture of Fouquet’s trial and:. 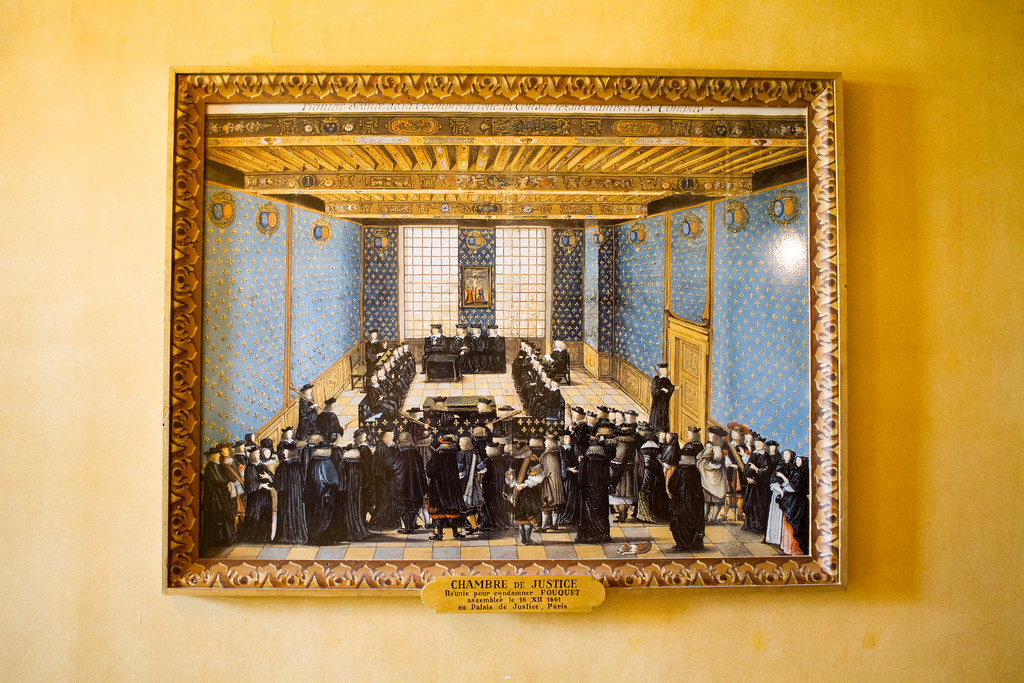 Is this the drawing written by Le Vau, the designer of this castle? Is this a drawing? 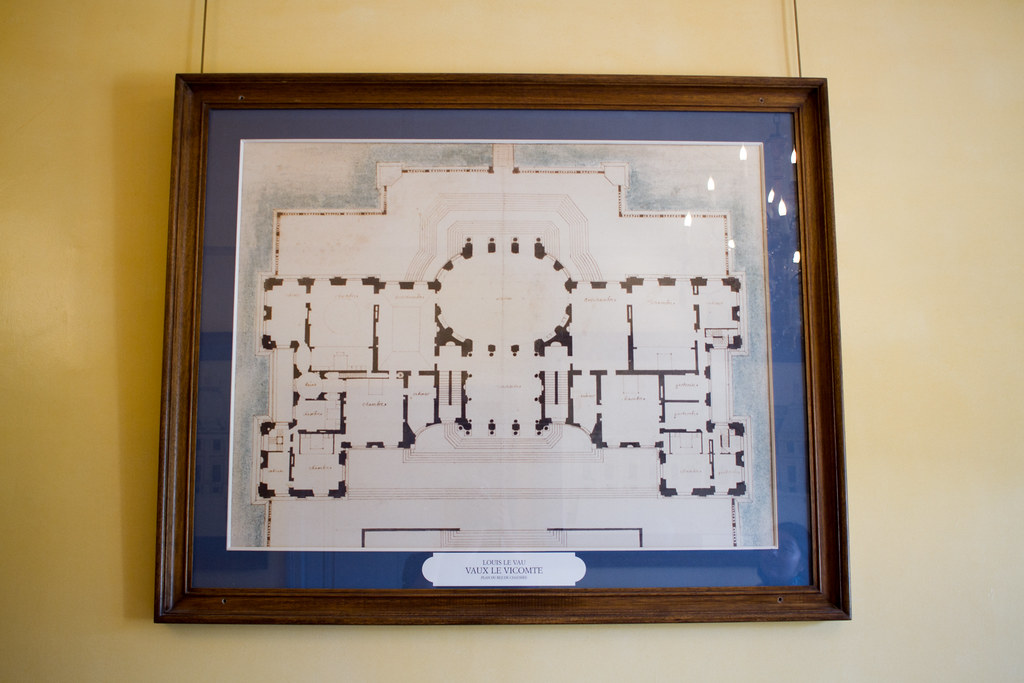 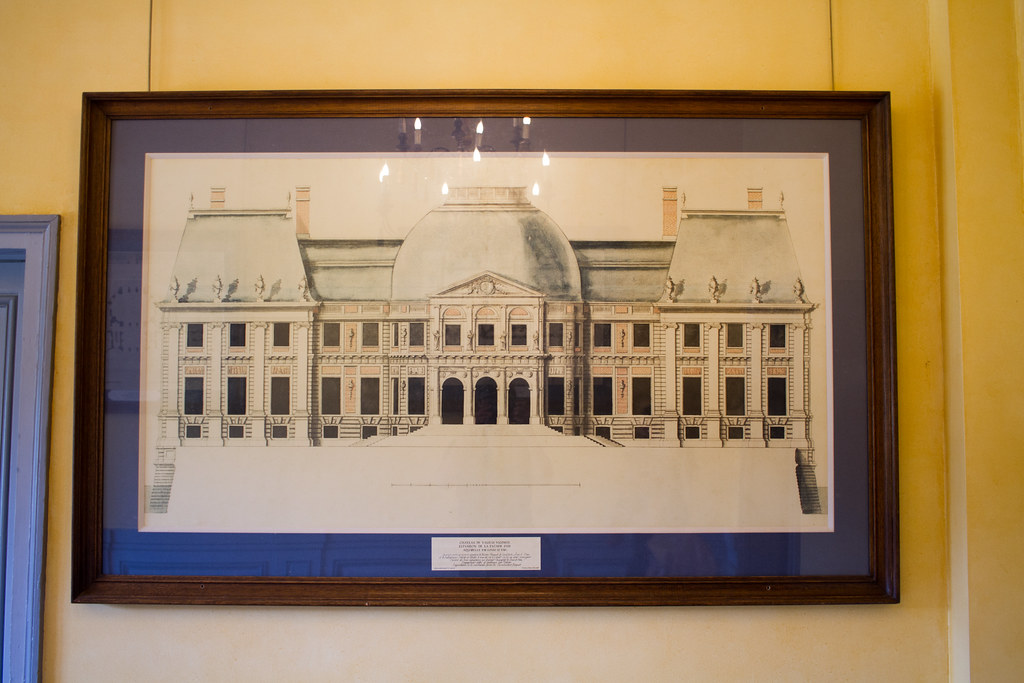 And this is a picture of the area around the castle at some time, I think. It was displayed at the stairs to the upper floor, but I forgot to take a picture of the note or the plaque explaining it. 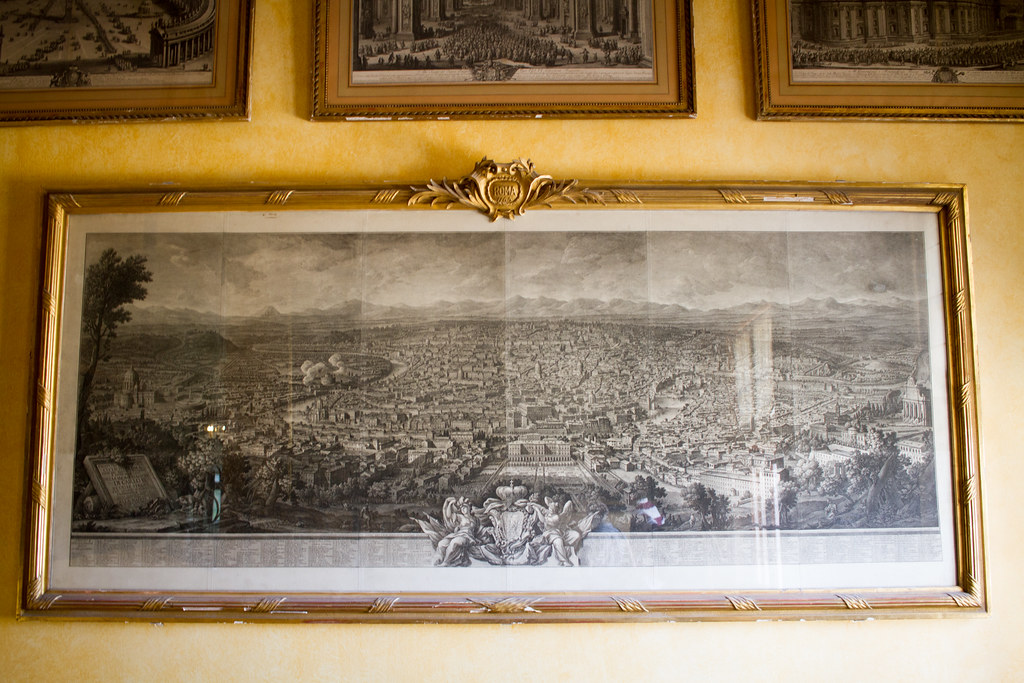 The interior of each room is also very luxurious, but I don’t think it’s overly decorated. (Sorry for the comparison with Versailles.) 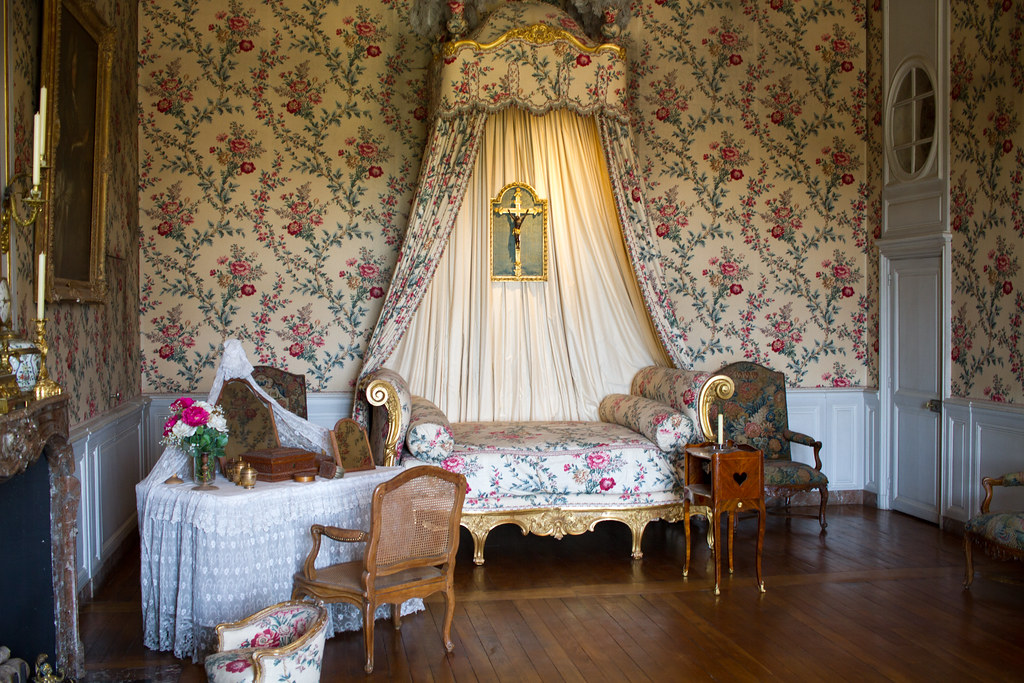 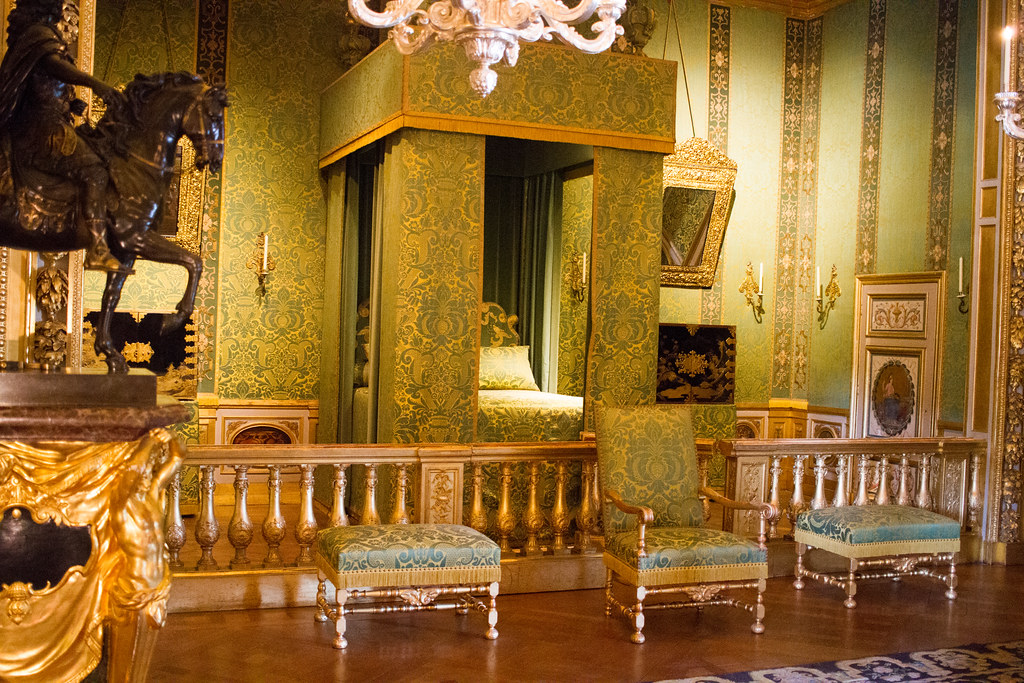 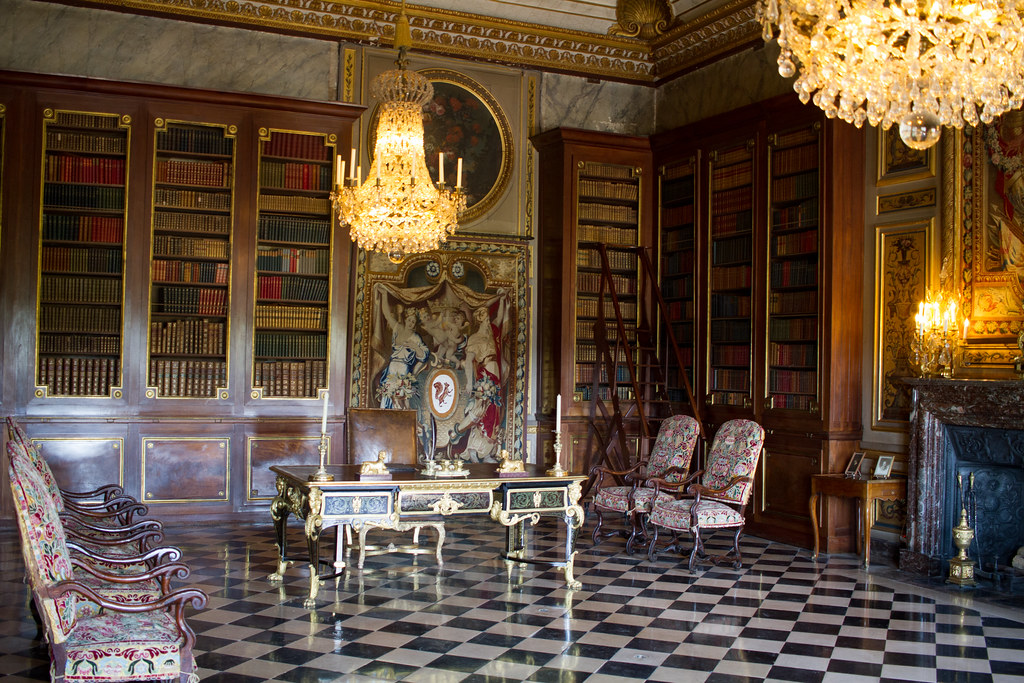 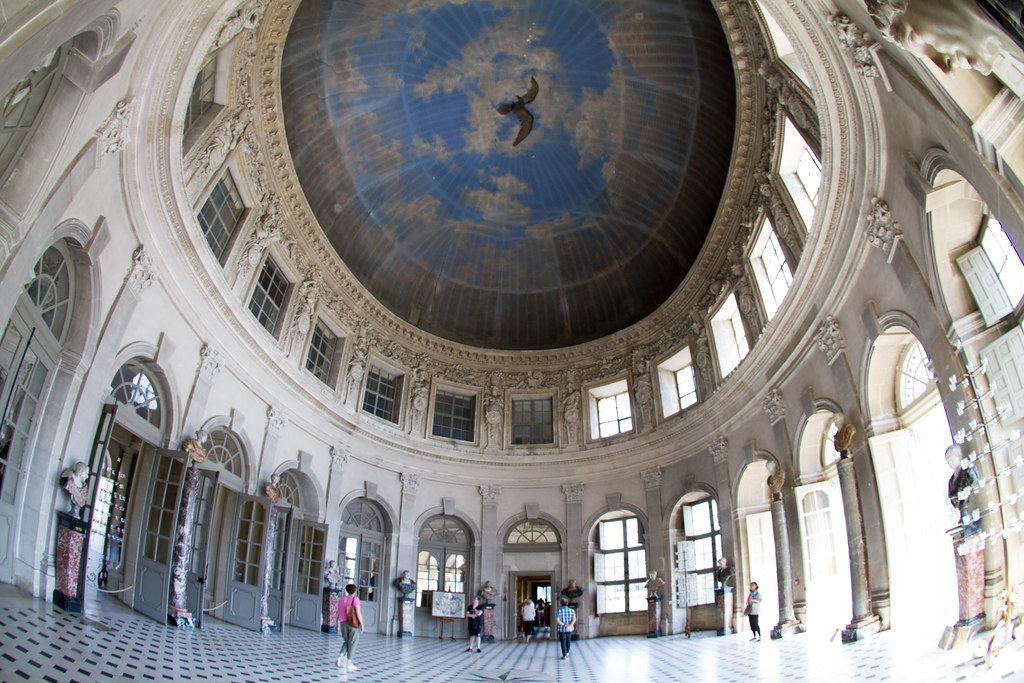 Don’t miss the view from the coupola 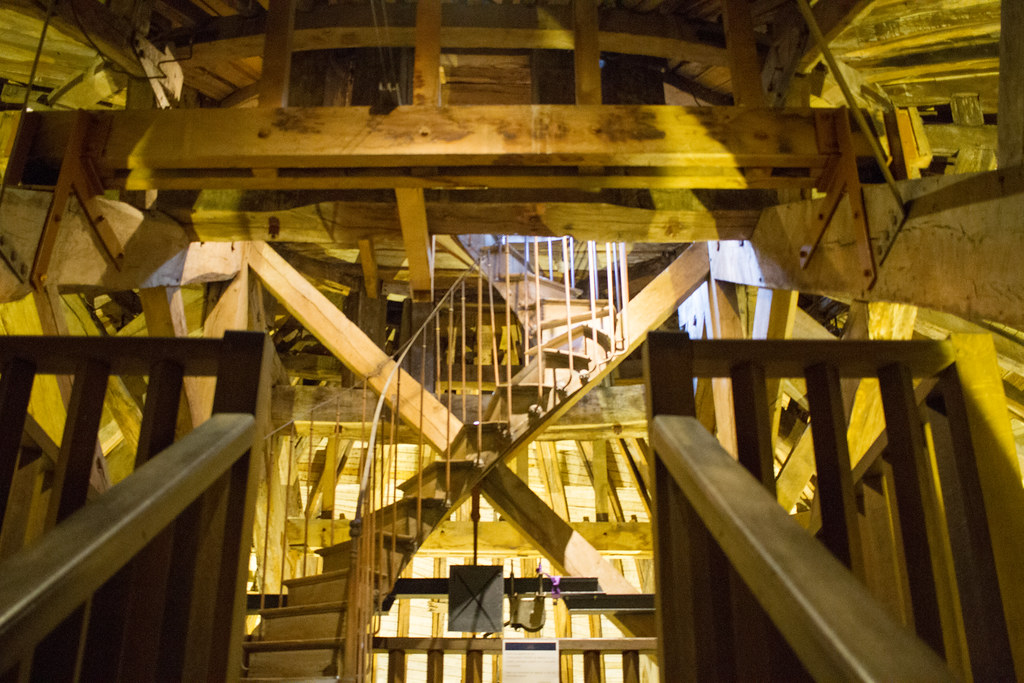 I think this is the must-see spot of this castle because the view of the garden from this cupola is fantastic. The garden is on the south side of the castle. 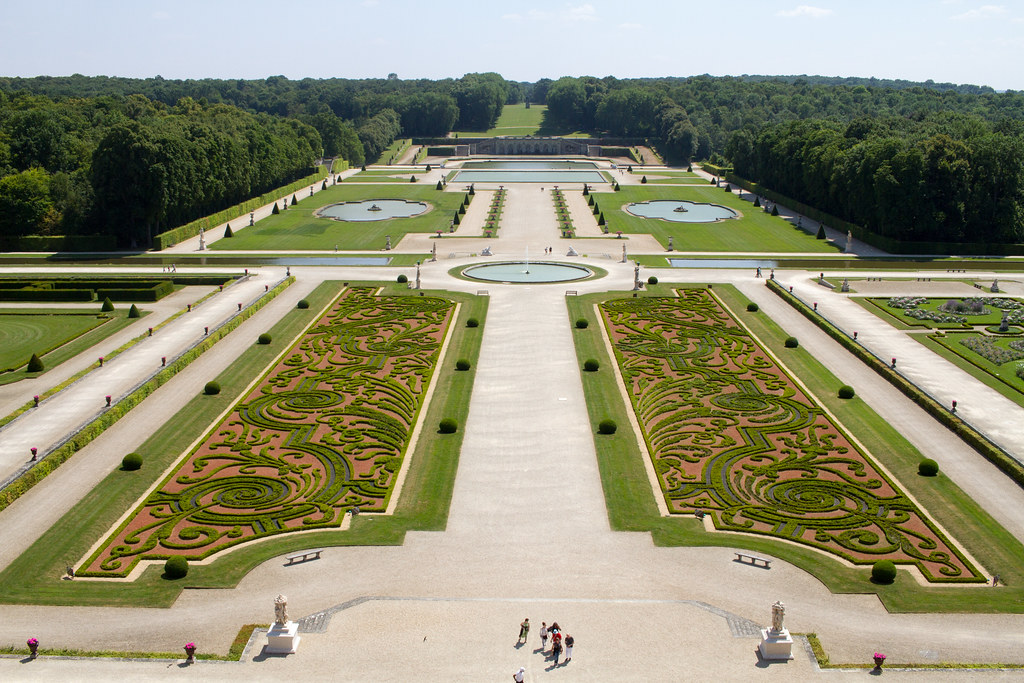 The view to the north is also very good. 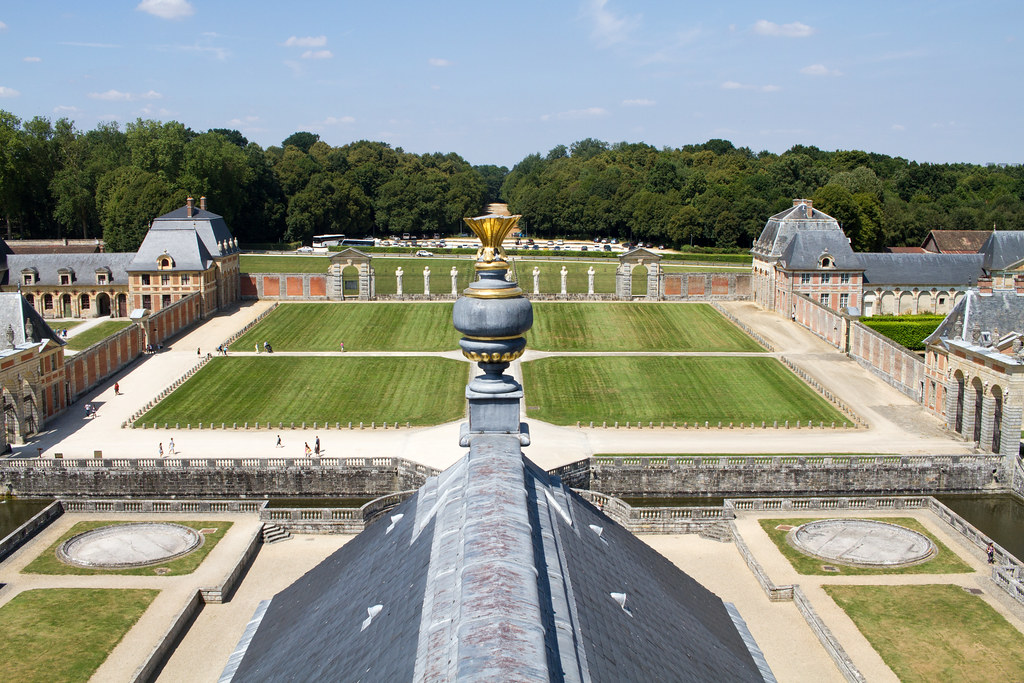 The booth in the basement had changed a lot.

What surprised me the most was the fact that the underground booths had changed a lot.

The biggest feature was the new addition of a floor with panels explaining the history of the castle. On that floor, there was an explanation of how this castle was built using projection mapping, which was very interesting. 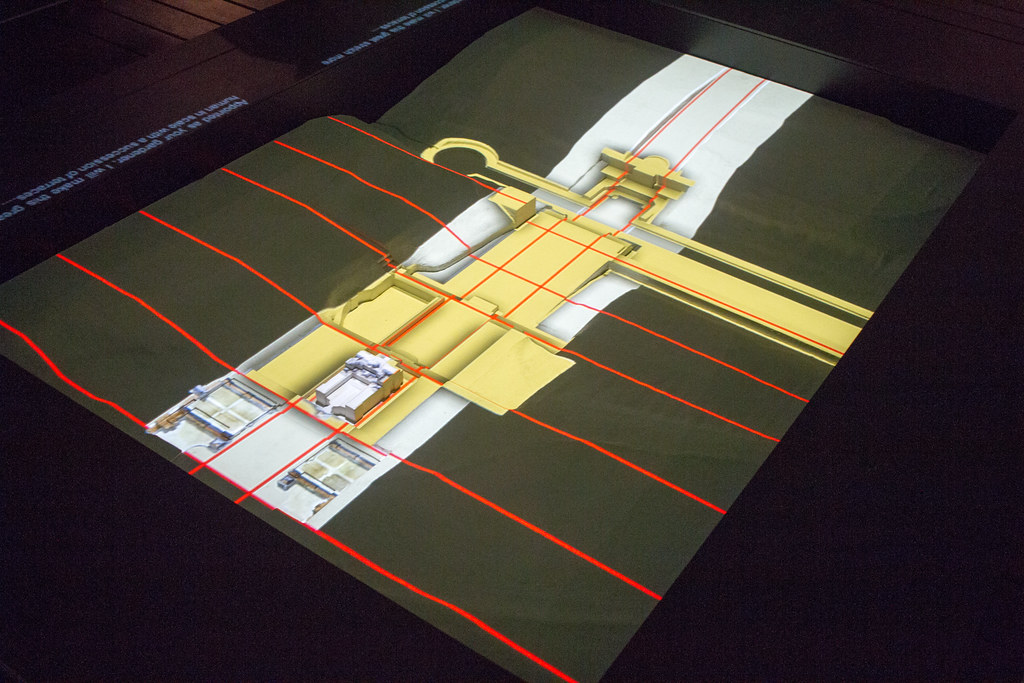 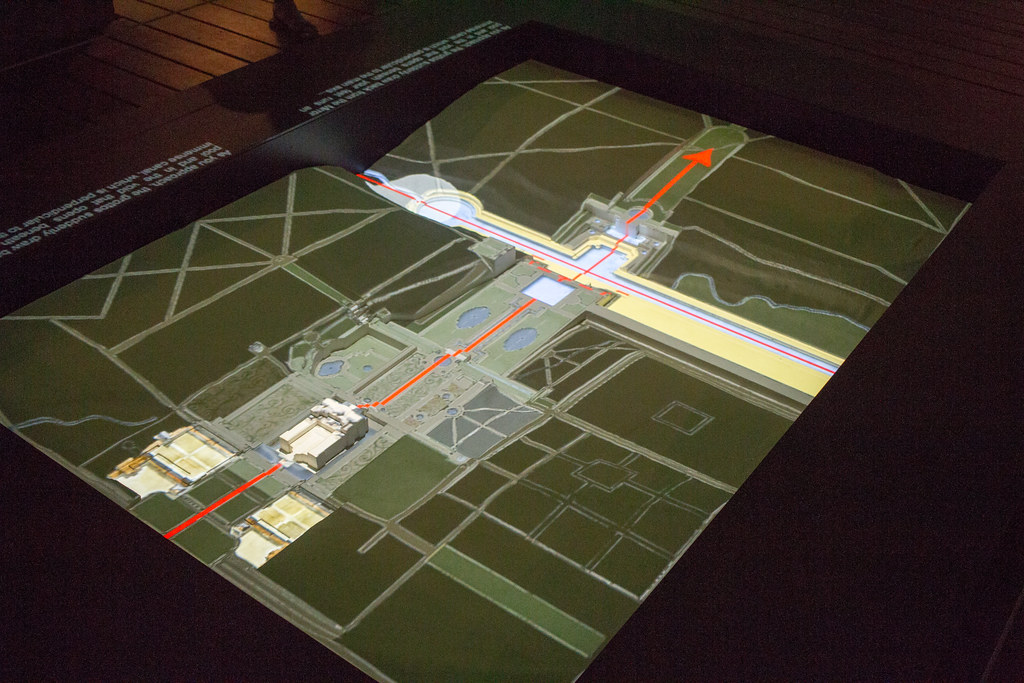 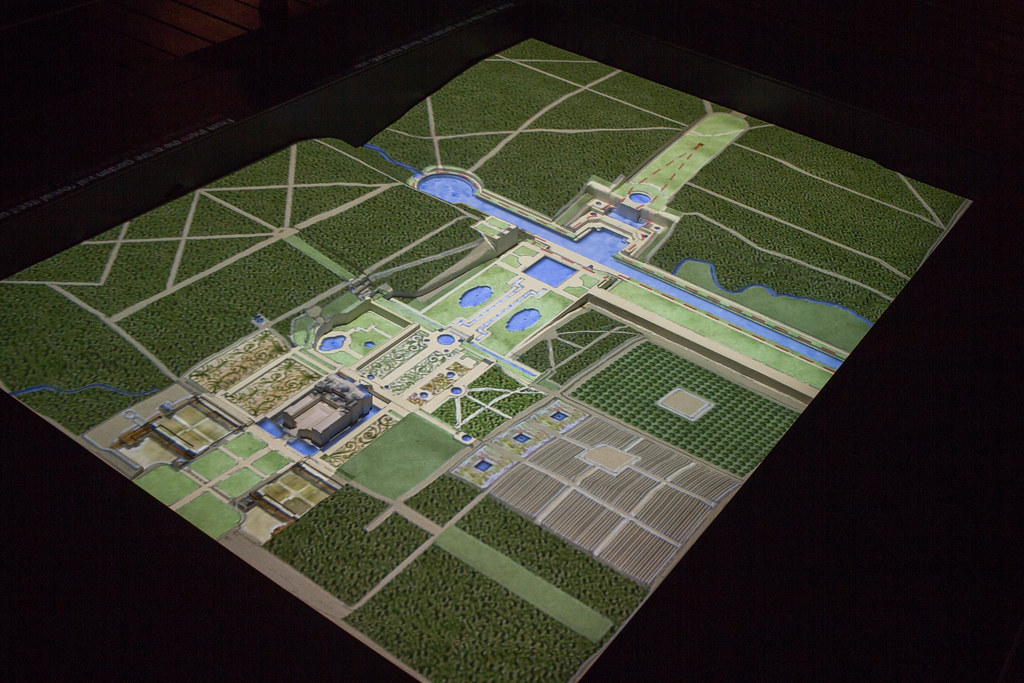 There were explanations in French and English. I couldn’t understand either of them, but they explained how the water for the fountains in the garden was drawn, the geometry of the garden design, and how the canal in the center of the garden served as a mirror when you looked at the castle from the garden hill on the opposite side of the castle. In addition, there were many other very detailed explanations.

I wanted to revisit it again when I can speak French a little better to understand it better.

The Legend of the Iron Mask and Vaux-le-Vicomte

By the way, this beautiful castle has been used as a location for many movies. The representative of them is “The Man in the Mask” starring Leonardo DiCaprio. 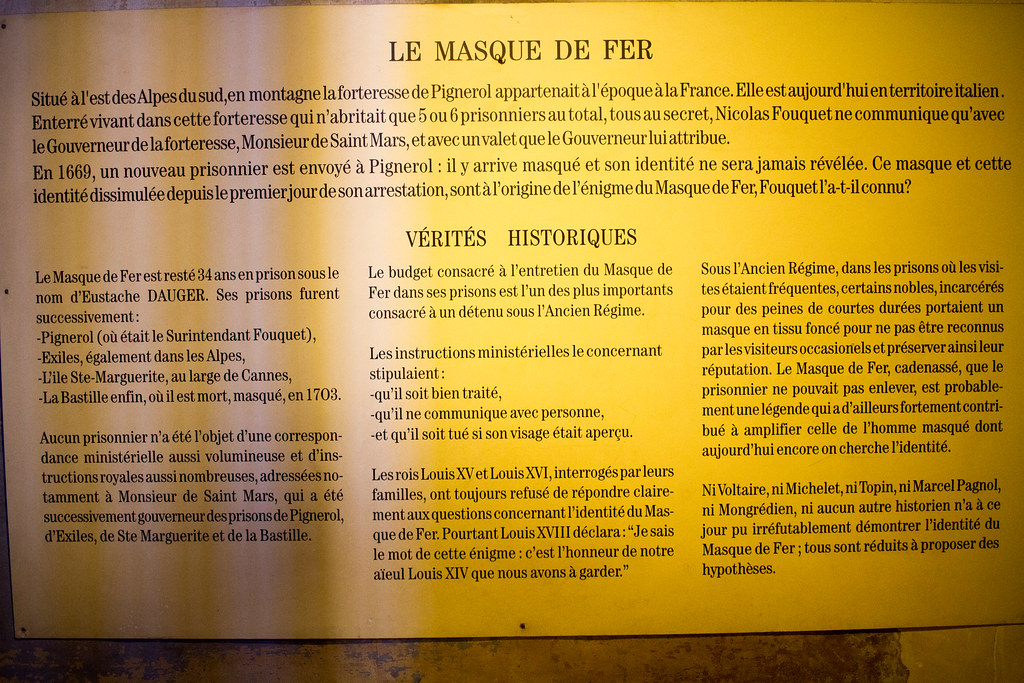 The legend of the Iron Mask is a true story of a prisoner who was imprisoned during the reign of Louis XIV, always wearing an iron mask (some say it wasn’t really an iron mask).

In the 19th century, a man named Paul Lacroix theorised that the Iron Mask was none other than Nicolas Fouquet. In fact, it seems that the man in the iron mask took care of him during his imprisonment in 1665 in Pinerolo, in the Alpes, now part of Italy, after he was accused of having offended Louis XIV.

I think it was used in the movie because of this relationship. By the way, I think I heard the same story 10 years ago and thought I should see this movie, but I haven’t seen it yet.

That was the end of the tour of Vaux-le-Vicomte Castle. After this, we went to Paris and returned the car at Montparnasse station, and we could finish this rental car trip safely.

Local time: January 30, 2014 Finally, it is the last day of Reunion Island. The last day's destination is Pit...

Travel note: I'm starting to write my Fall 2015 series on Germany and the Enclave!ようやく2015年10月末に行って来たドイツ旅行記を開始します。今回の旅行の...