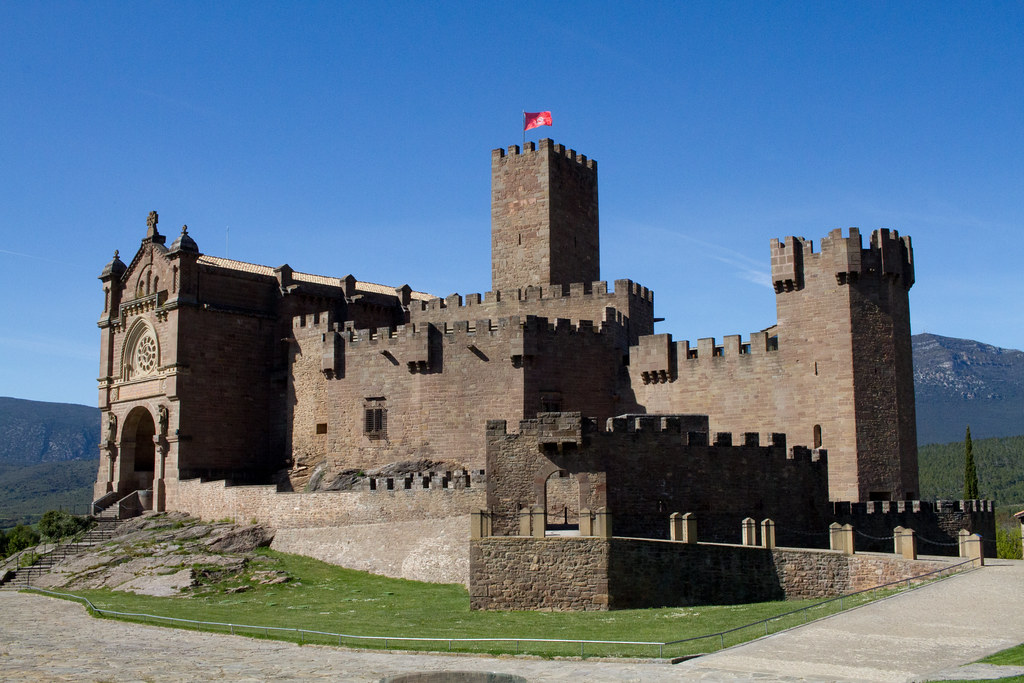 Was Francisco Xavier a local notable, a monk?

To the hometown of the saint who is very famous for Japanese.

The name “Javier” may not sound familiar. Would it be more appropriate to pronounce it “Xavier”? Yes, this is the birthplace of Francis Xavier, who most Japanese know as the first person who introduced Christianity to Japan during the Warring States Period.

His birthplace is a small castle standing alone in the wilderness of Navarra, Spain. It is located in an inconvenient place, somewhat far from major cities and national highways, but perhaps because of its fame, it is a popular sightseeing spot for Japanese people, as it is listed in the Globe-Trotter. I also found out about it by looking at “Chikyu no Arukikata”.

The specific location is about 30 minutes from Pamplona.

There is really nothing here. There was not even a town on the road from the highway to here. 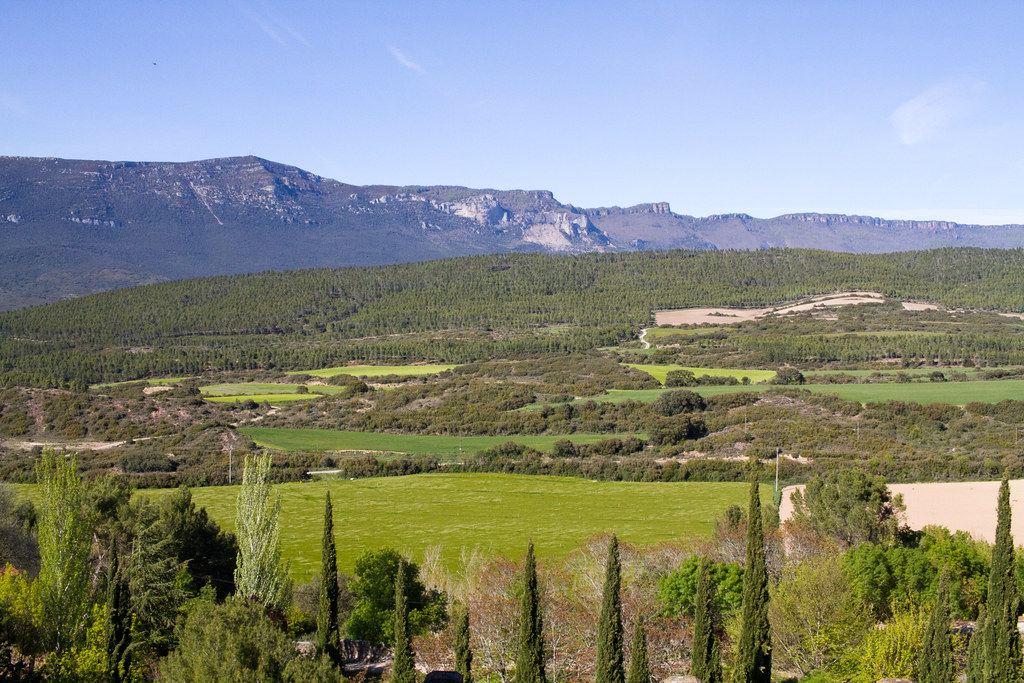 I don’t know if it’s because it’s off-season, inconvenient, or because we came late, but when we arrived, there were no other tourists besides us, and when we thought there were, one tourist bus was parked. But in the end, there was only this group, and it was very quiet. The parking lot was very big for that. 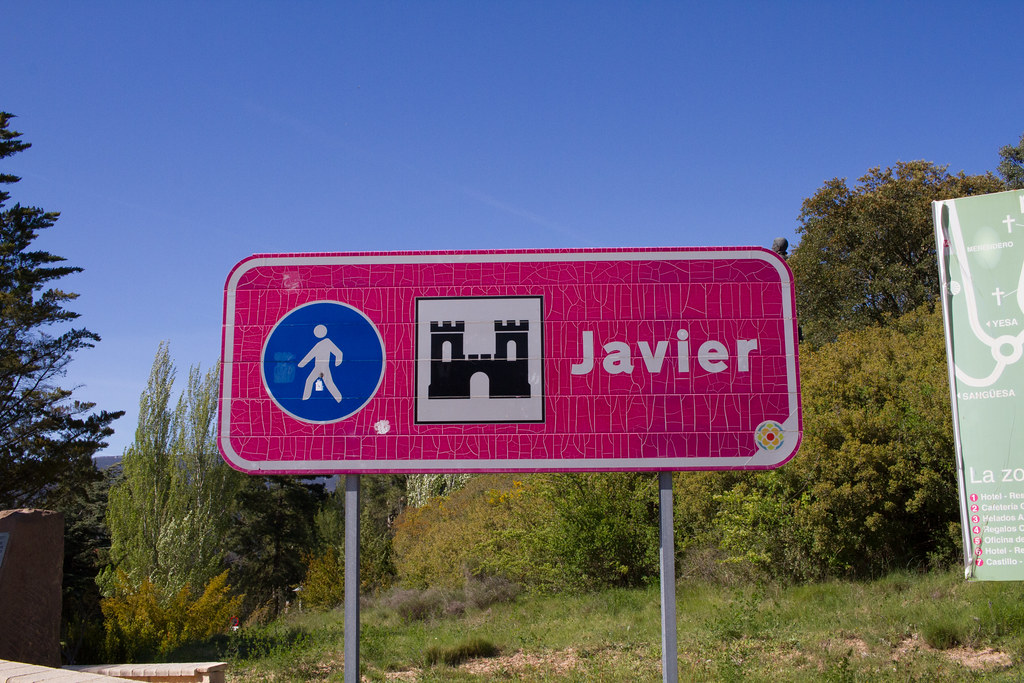 It was a bit far from the parking lot to the castle so we had to walk for about 5 minutes. 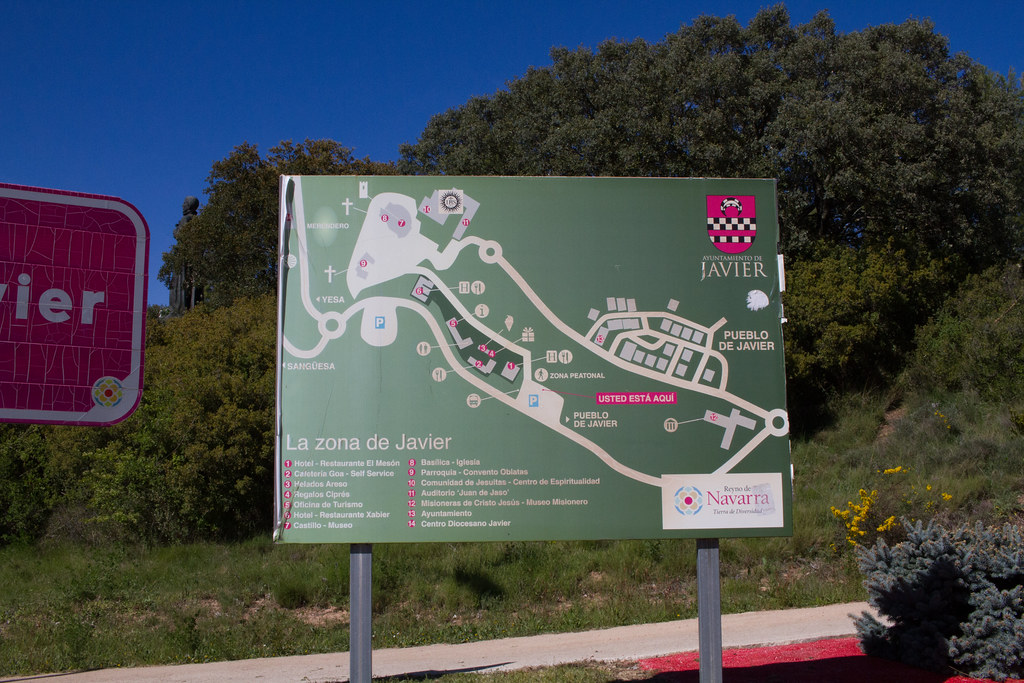 There is a statue of Mr. Xavier by the parking lot. He was staring at somewhere far away. 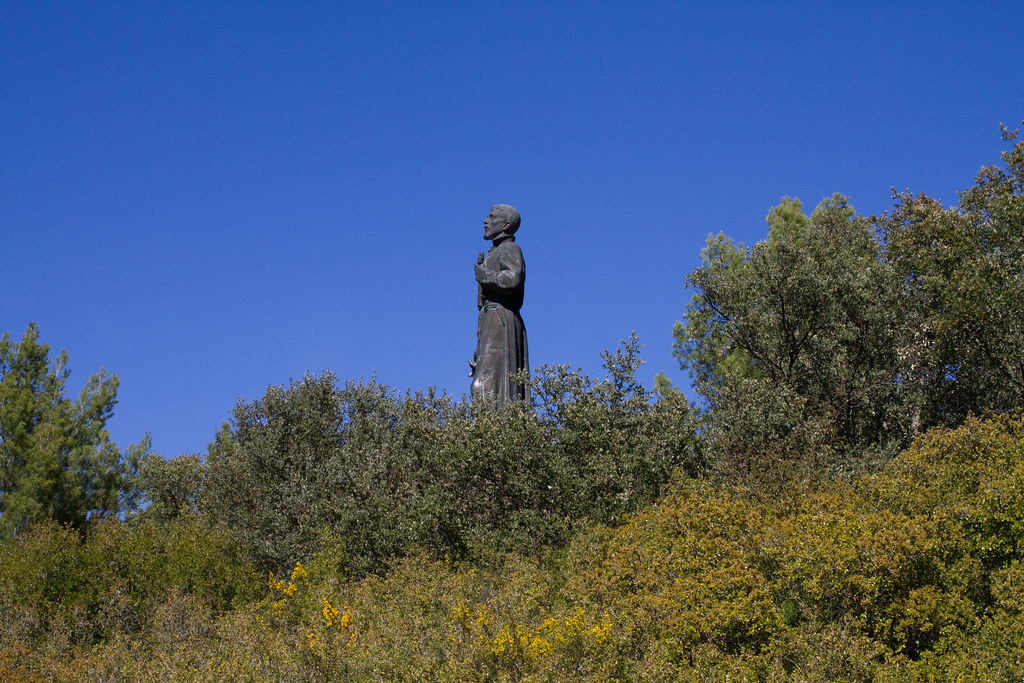 We walked along these paths to the castle. 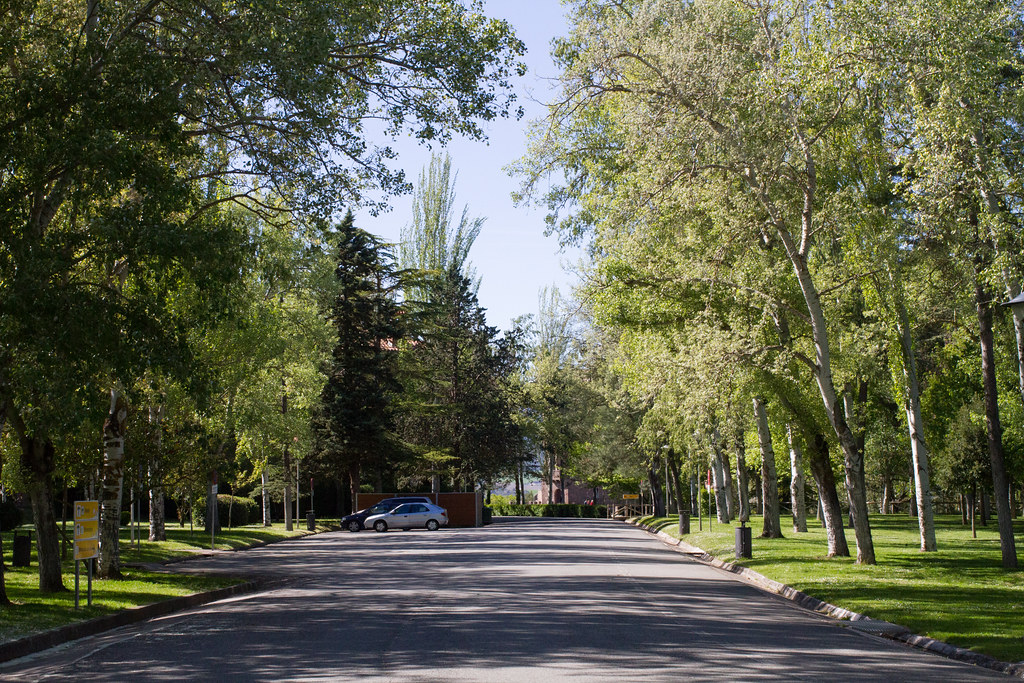 Then we arrived at the castle. It’s not that big, but it’s a nice castle with a good atmosphere. It kind of looks like the castle you see when you clear the Super Mario Bros. stage lol. There’s even a flag on it.

The square in front of the castle was very big. There is a portrait of Xavier in the distance. He is preaching something. 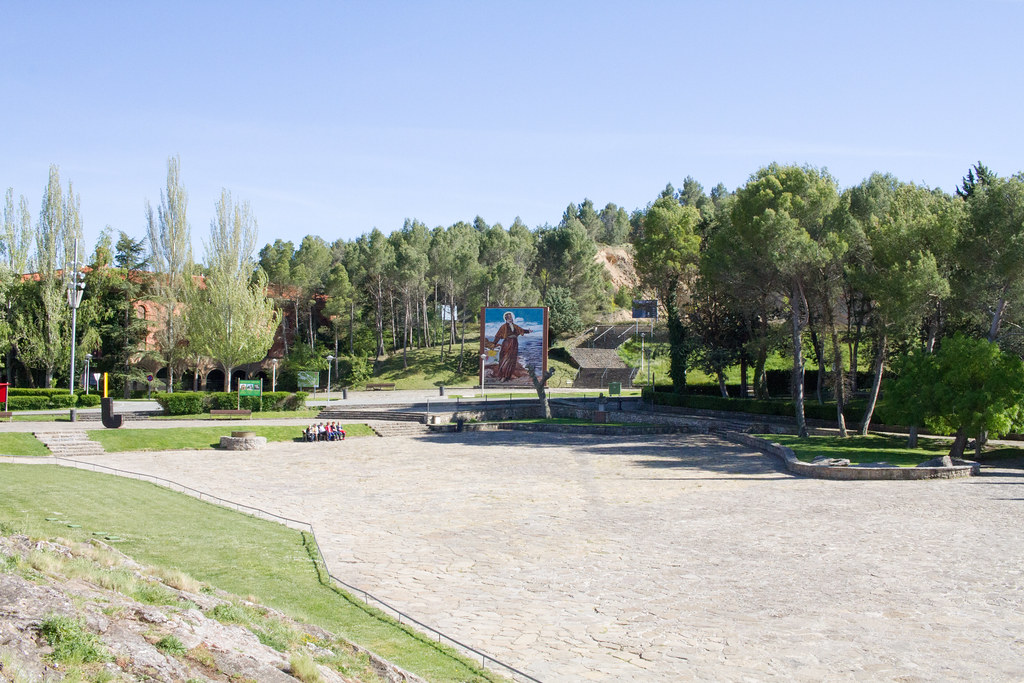 Now, let’s visit the inside of the castle. First, we visited the chapel next to it. I heard that this place was added in 1901. 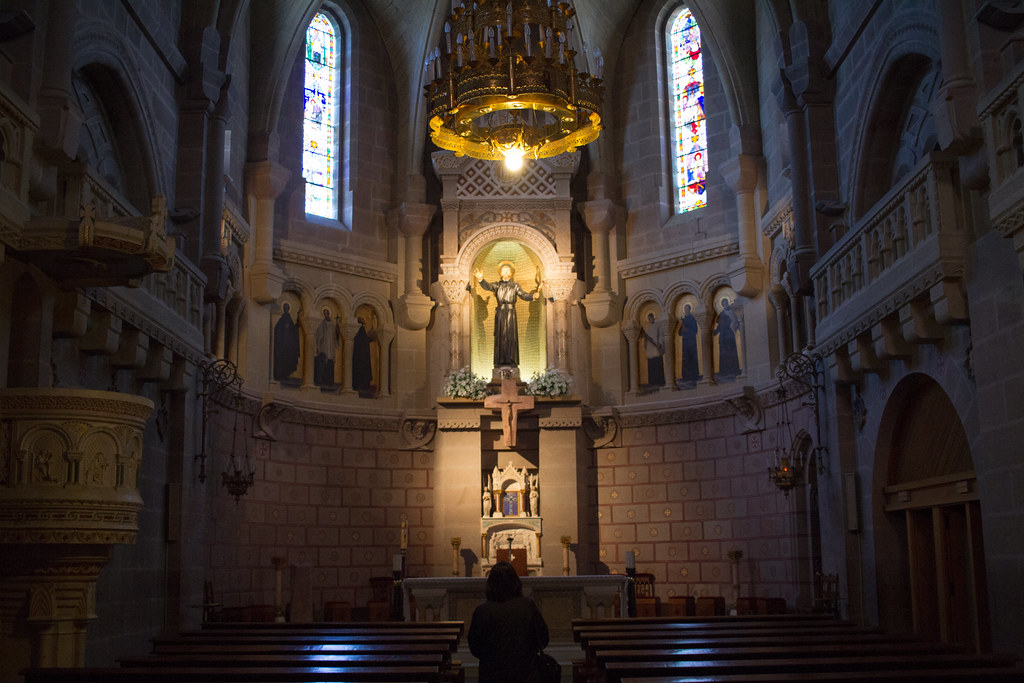 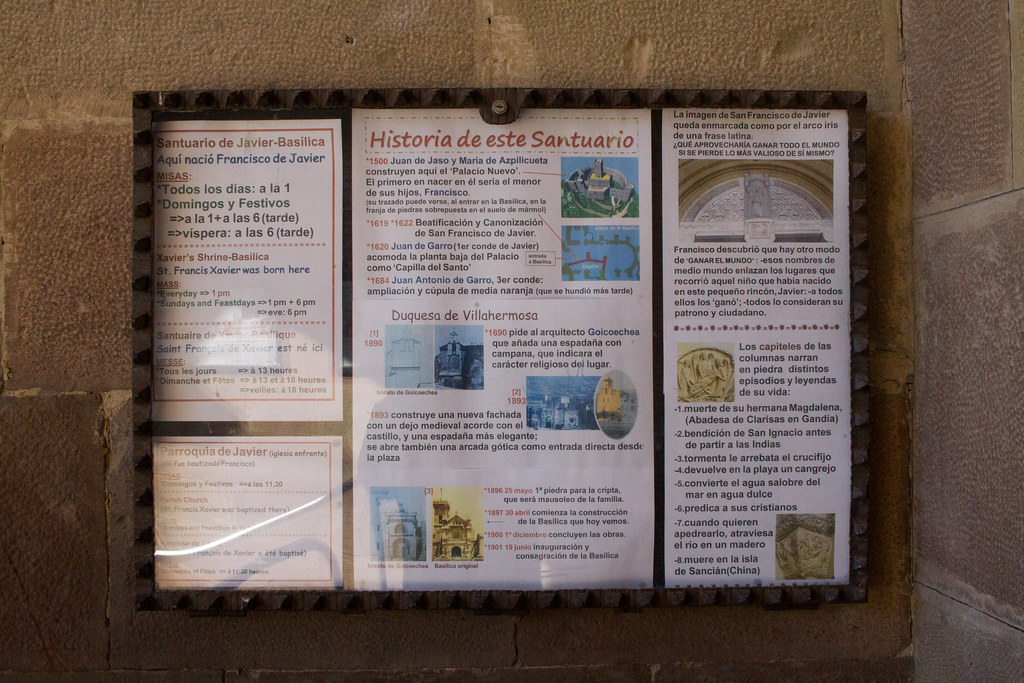 Then, you will enter the inside of the building through the entrance of the castle like this. It’s a nice entrance. 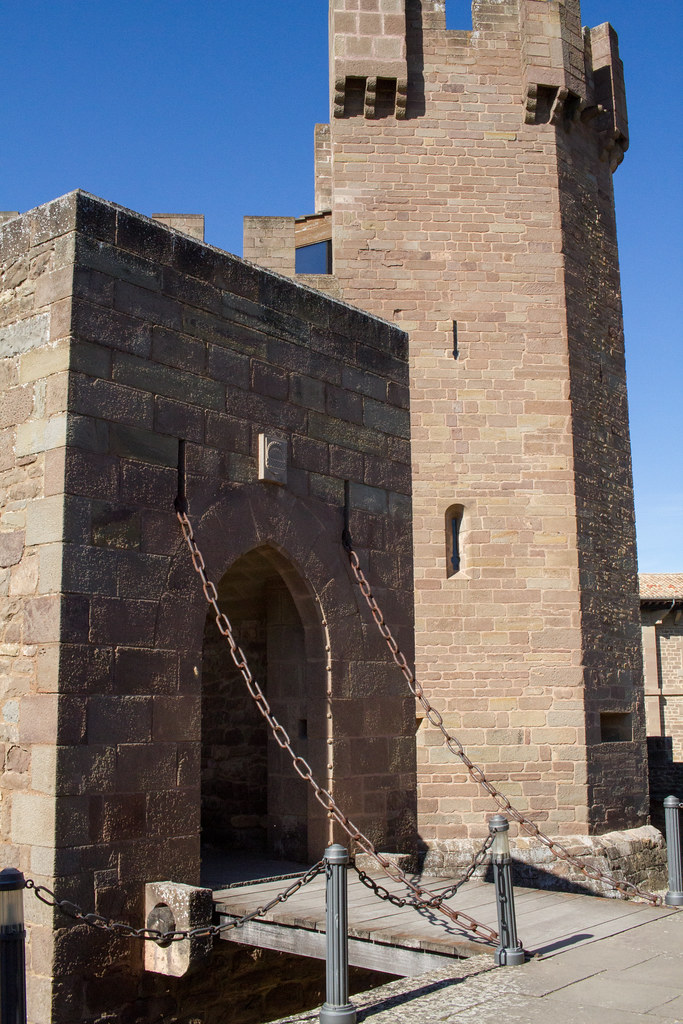 I got a pamphlet at the entrance, but I was forced to get the English version. It was very helpful.

I thought this pamphlet was very small but very efficient. The map of the tour route is easy to understand.

The description of the history of the castle is also very simple and coherent. You also have a description about St. Xavier.

According to this pamphlet, the original castle was built at the end of the 10th century with a tower in the center, which is still standing today, and then it was enlarged repeatedly until it took its present shape around the 14th century. It is said that this was the time when the castle was owned by Xavier’s mother. The castle was abandoned for a long time until the 19th century.

A wide range of Japanese-style exhibits

The inside of the castle was basically a museum, but most of the exhibits were related to St. Xavier’s missionary work in the East. St. Xavier was born in this castle on April 7, 1506. When he was young, he studied at the Sorbonne in Paris. And it was in 1541 that he set out on a Jesuit mission to China and Japan.

The exhibition in the castle explained about his missionary activities in Japan with dolls and so on. There were English subtitles, so it was easy to understand. But it was a bit dark and eerie. 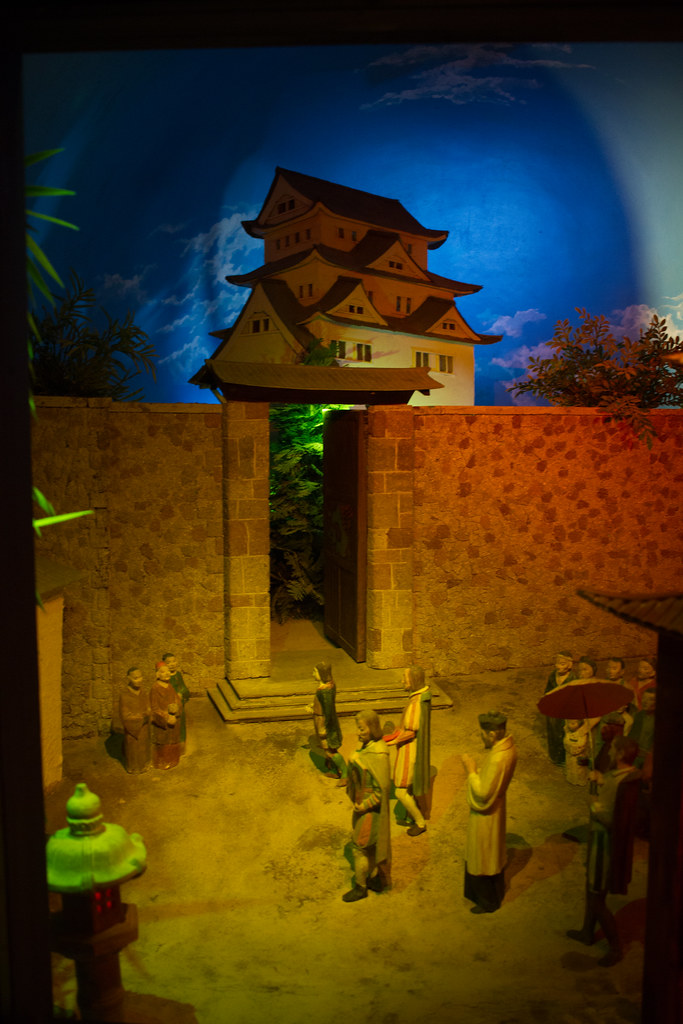 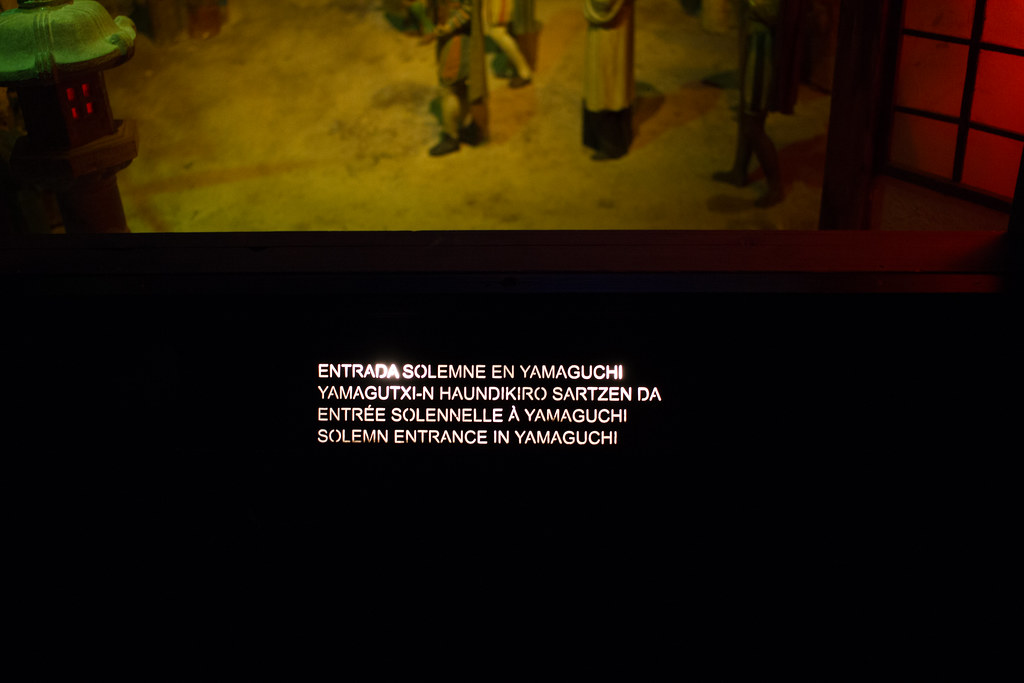 I had some knowledge about St. Xavier, that he was a missionary of Christianity in Japan, but I didn’t know how he was actually working in Japan. I had no idea that I would be studying the details of his missionary activities in Japan here. 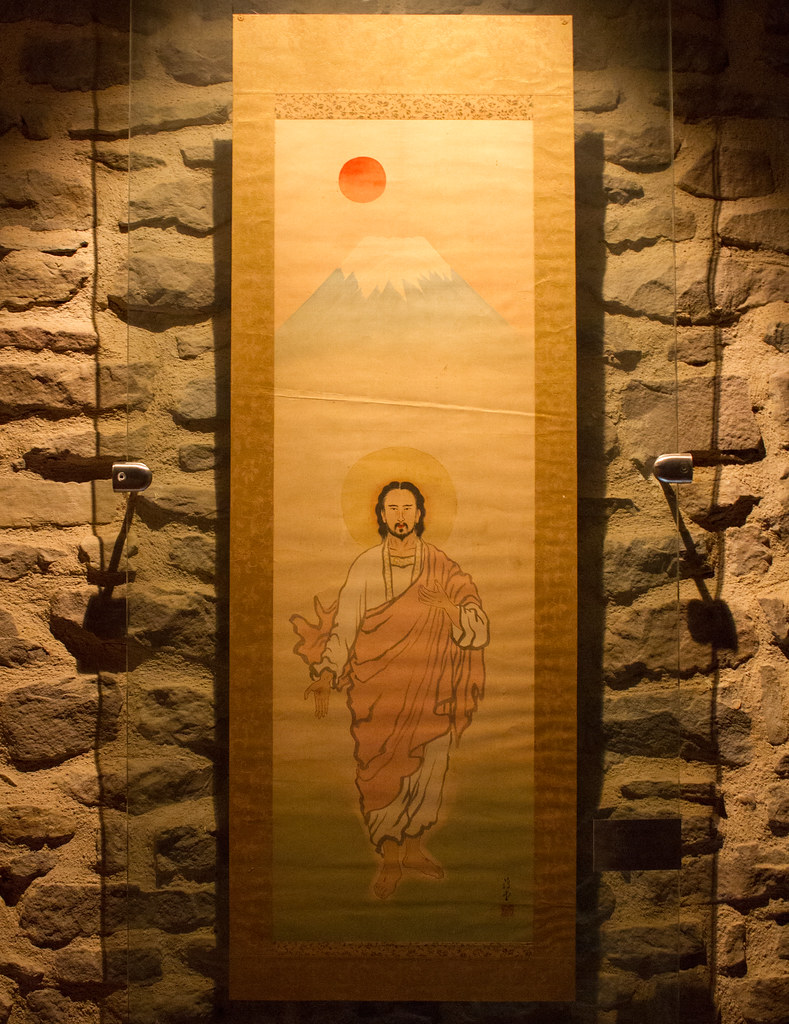 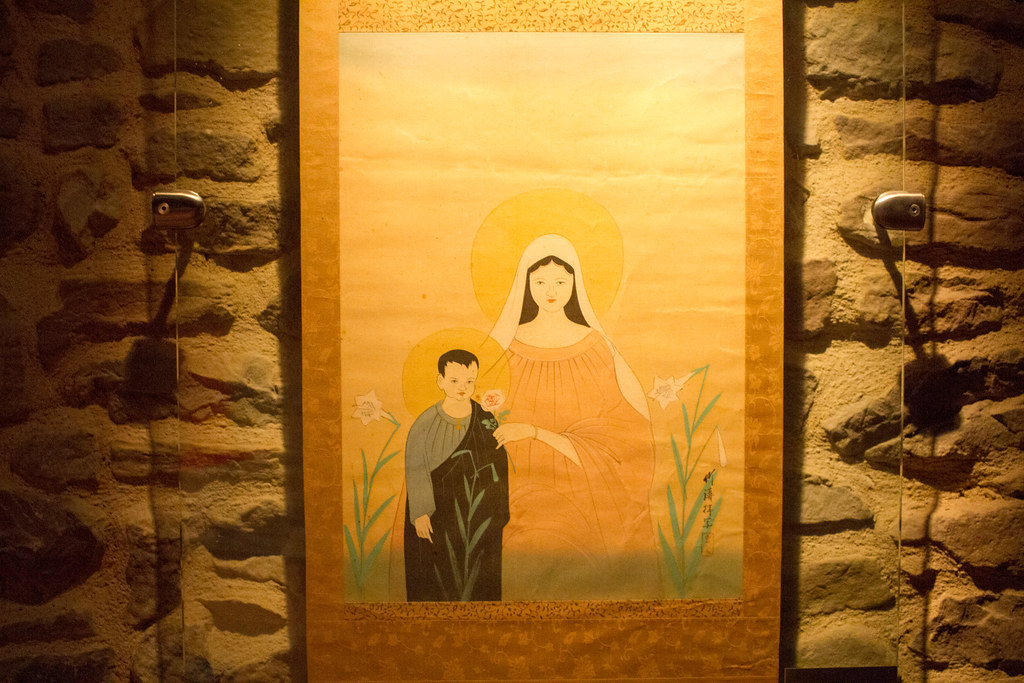 There was also a painting on display depicting the depression in Japan. It may seem persistent, but this is the real thing, and it is unknown whether it is from those days. 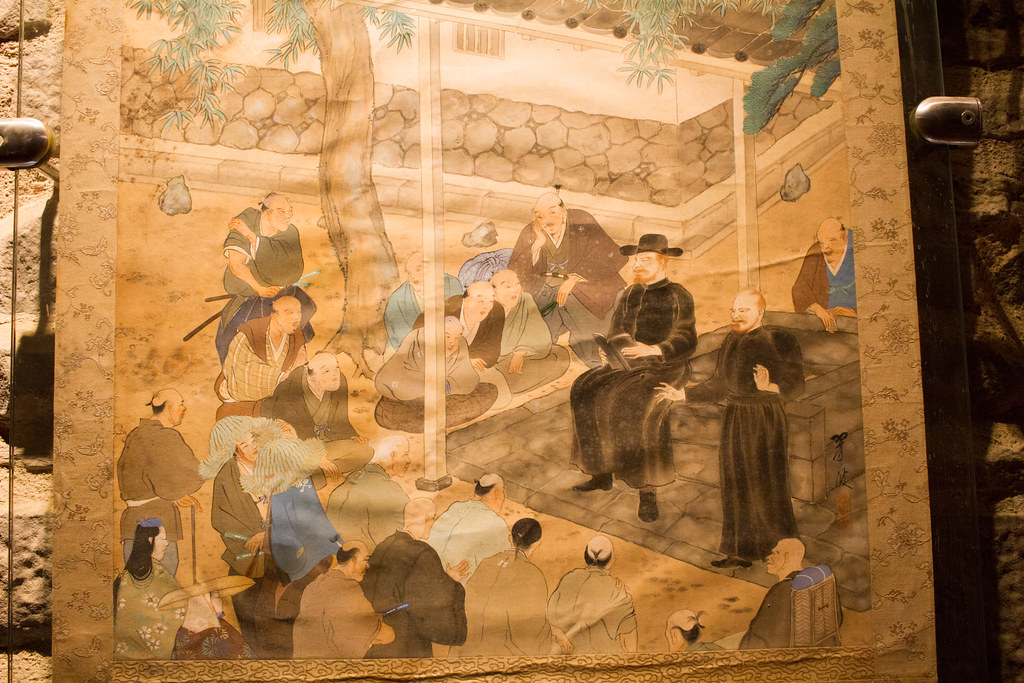 There was also an extensive display of his letters and other information about this castle. 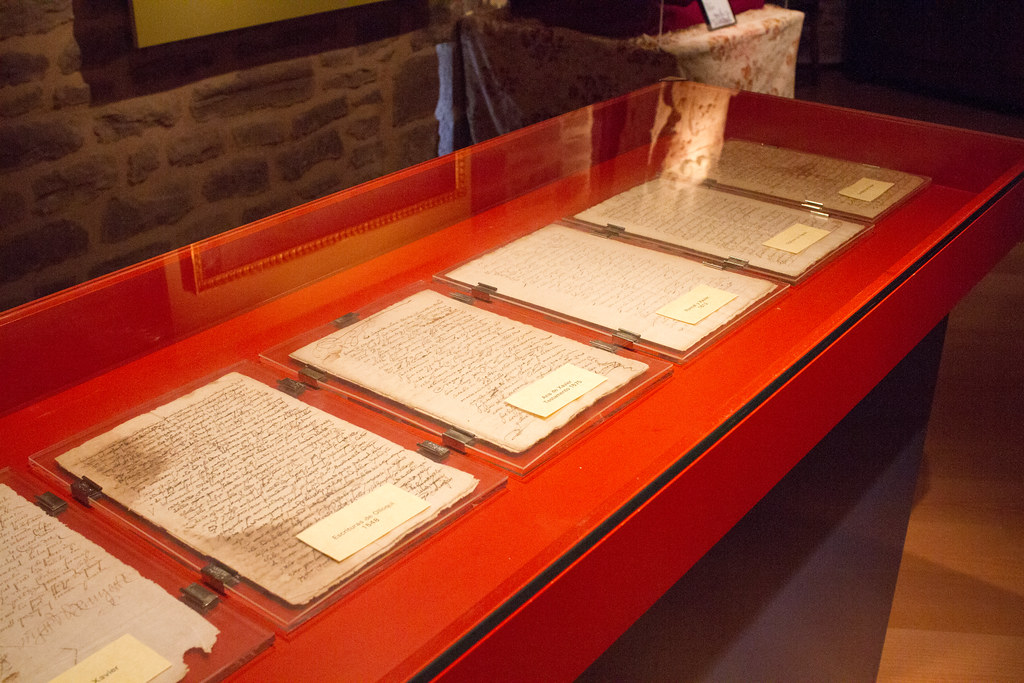 Of course, there were also some western (which is kind of weird to say) religions on display. 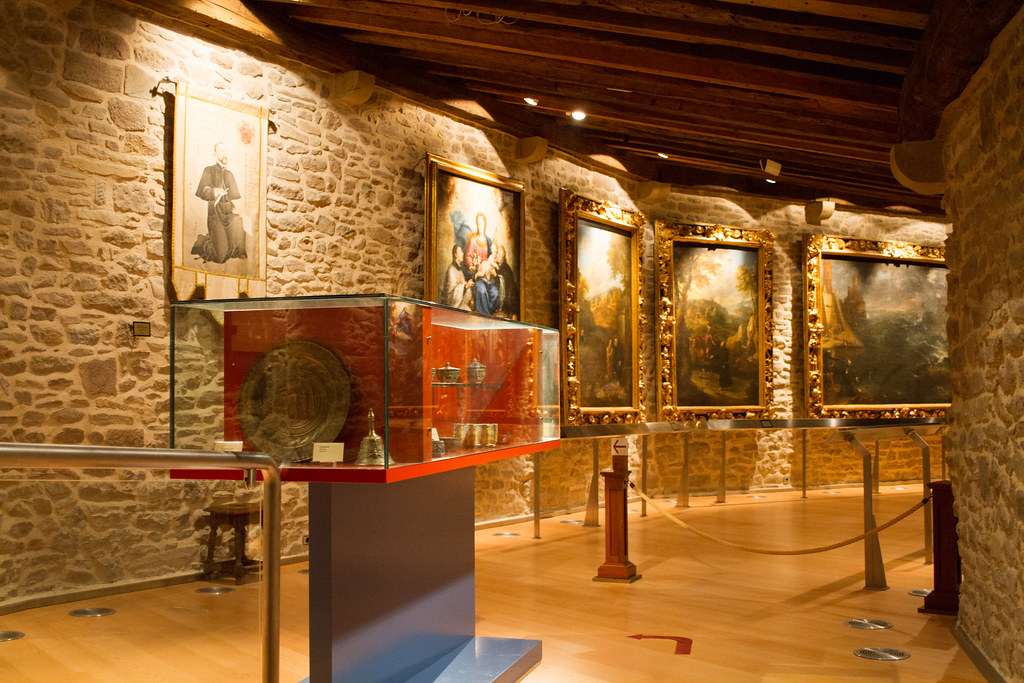 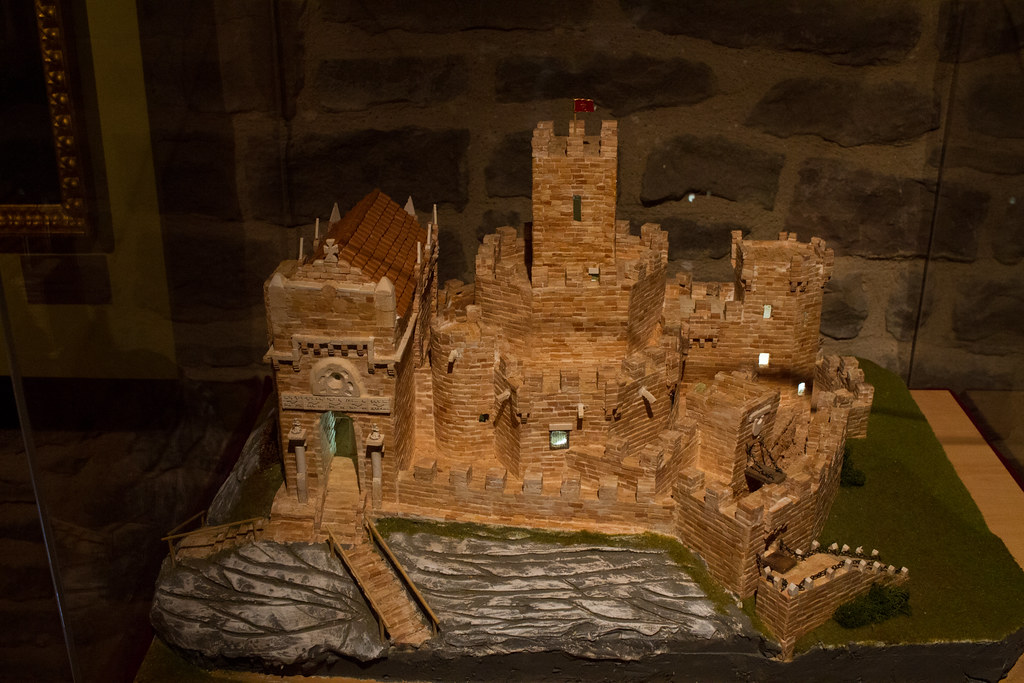 It’s not a large museum, but it’s well worth seeing. Perhaps because it was related to Japan, we took our time to look at the exhibits, and it was more fulfilling sightseeing than I expected.

Even so, I think it is remarkable that such a foreigner, born and raised in the wilderness of Spain, devoted his life to Christianity, visited a country far away from his homeland, and died without returning to his homeland, considering the historical background of that time. It’s like going to Mars to evangelize (is that too much?).

In any case, I was a little surprised and impressed that there was a sightseeing spot that reminded me of Japanese culture in a place where I don’t know where I could go without a car.

Going down the silver road -2012 France and Spain Real Time Edition No.18

There are only two days left.We arrived in Santiago de Compostela a day earlier than planned, so we decided to move on a...