The next stop after Bernkastelkose was Trier, also on the Moselle River.

Trier, after all, is famous for “the oldest city in Germany” and “the Mosel wine region”, I guess.

Once we were back on the autobahn, it took longer than expected, but we still arrived from Bernkastelkose in less than an hour.

I found a multi-storey car park near the central square, but it was full so I waited a bit. But I waited only about 10 minutes, so I could park earlier than I thought. The parking lot in Europe is still small… 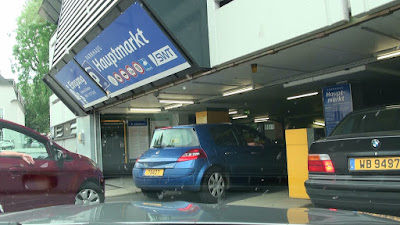 It’s not a great photo or video, but this kind of multi-storey car park is not so different from Japan. But you will be surprised to see how small they are.

First of all, we came to the central square. It is crowded with many people.

It seems even more crowded today, especially since there weren’t many people in the area.

Next we came to the cathedral. We were overwhelmed by the power. It’s so big! It was magnificent from the outside, but I was very impressed with the inside as well. I think this is one of the best scale in Europe. After all, the weight of history is different, isn’t it? I’m just so happy with this.

That said, there is still a lot to see in the city. I also visited Porta Nigra. This place was also crowded with many tourists. This seems to be a historic gate too. It’s also a symbol of this city, isn’t it?

There were many other things to see, but my family was a little tired because it was the fifth day of the trip and we had been traveling for a long time. We wanted to check in early today, so we decided to leave Trier around this time. Date of visit: April 23, 2011The last village of the day is "Ségur-le-Château" in the Limousin region. It is a beautiful...

Local time: May 9, 2014The last day was sunny and today was the last and first short drive of the trip.Because we had al...