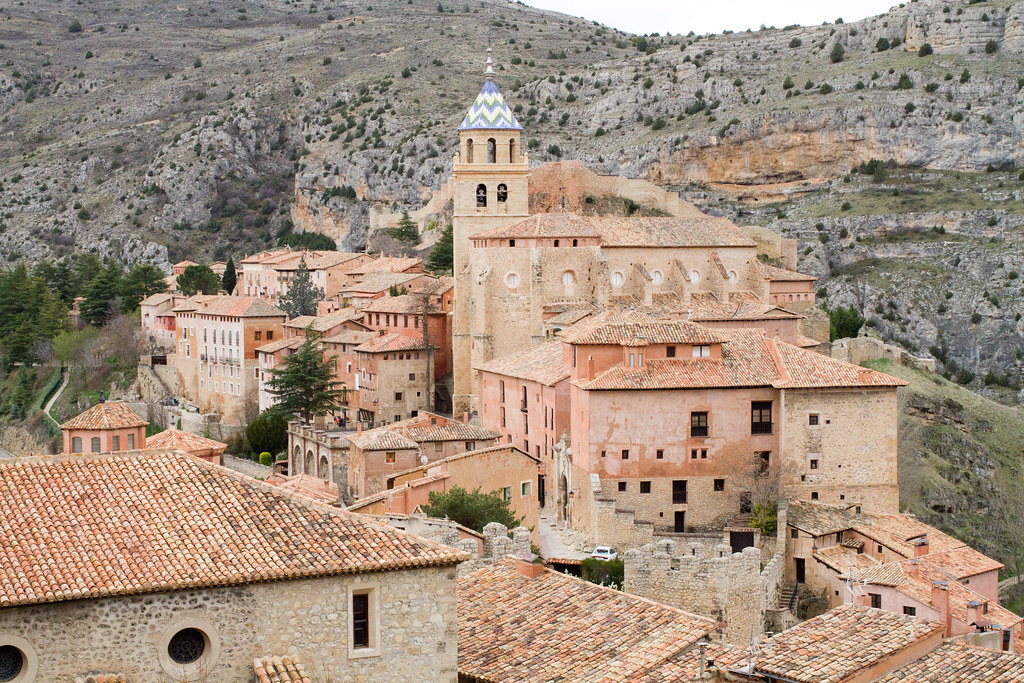 A memorable visit to the most beautiful village in Spain, No. 1

I’m gradually starting to write about my “Tour of Spain’s Most Beautiful Villages”, which I started in 2016. The first memorable one is a village called “Albarracín”, located in Teruel province, Aragon. To tell you the conclusion, it was a big hit right away! It was the village of It seems to be one of the most popular places in Spain.

As I’ve written in this blog before, “Los Pueblos más Bonitos de España” (The Most Beautiful Villages of Spain) is a relatively recent addition to the growing number of “beautiful village associations” around the world.

I’ve been paying attention to the most beautiful villages in Spain for a few years, but I haven’t been able to visit them. But this time, I could finally start my trip to visit them. I haven’t decided yet whether I’ll conquer all of them like I did in France, but I think it won’t be so hard to conquer all of them because the number of registered villages is smaller than in France and Italy. I’m sure it will happen soon.

First, check the location. It is around here on the map.

It is located in the province of Teruel, Aragon, and the main city nearby is Teruel, but it takes about 1 hour and 30 minutes by car from there. But to begin with, the city of Teruel itself is a bit inconvenient. It is located in the middle of “Zaragoza”, the capital of Aragon State, and “Valencia”, which is famous for oranges, but it is a mountainous area with quite a high altitude, which may be the reason why you feel the inconvenience of transportation. However, that doesn’t mean that the road is too steep.

When I visited, I went from Cuenca side, that is, west side. This way is a little bit narrower than the other way. It took a little more than two hours from Cuenca by car.

By the way, the altitude is high in this area in general. Albarracin seems to be about 1,200m. So, it was quite cold even in the end of April. In addition, the weather was not good, so we had to wear a sweater for sightseeing.

Remnants of such a walled city can be seen throughout the village. For example, there is still a kind of “Great Wall” in this city. Can you see it in the upper part of the picture below? 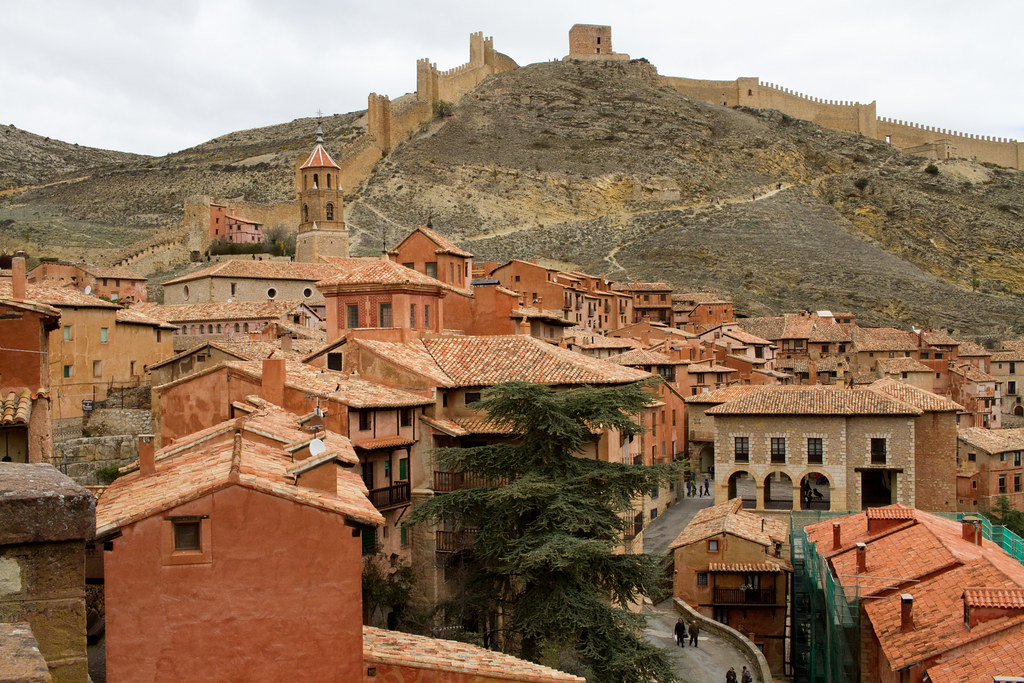 The place where we parked our car this time was on the lower side of town. It seems that there were several parking lots around the city, but it did not seem to have much capacity. In addition, because it was quite crowded because it was a holiday, it was difficult to park. Still, we were lucky enough to find a good space.

From the parking lot, we climbed the stone stairs into the city. It was a beautiful day at dawn in Cuenca (where we stayed the night before), but it was cloudy when we arrived here in Albarracín. But fortunately, it didn’t rain.

As you can clearly see from the photos, the reddish stone houses are very impressive. I’ve been to many beautiful villages in Europe, and from my point of view, I thought it was very beautiful. 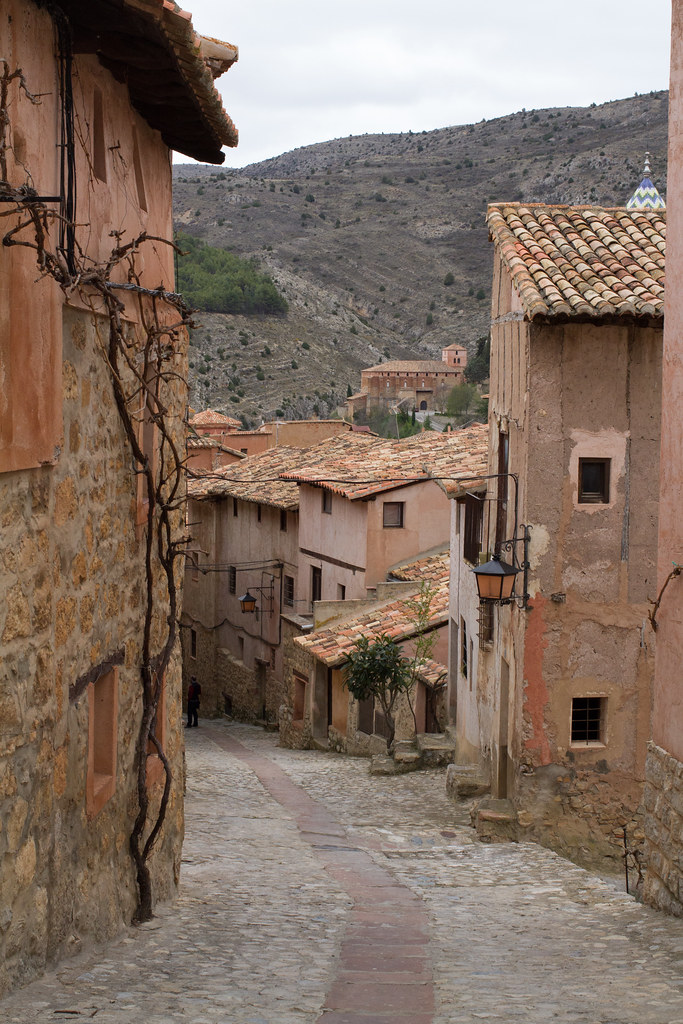 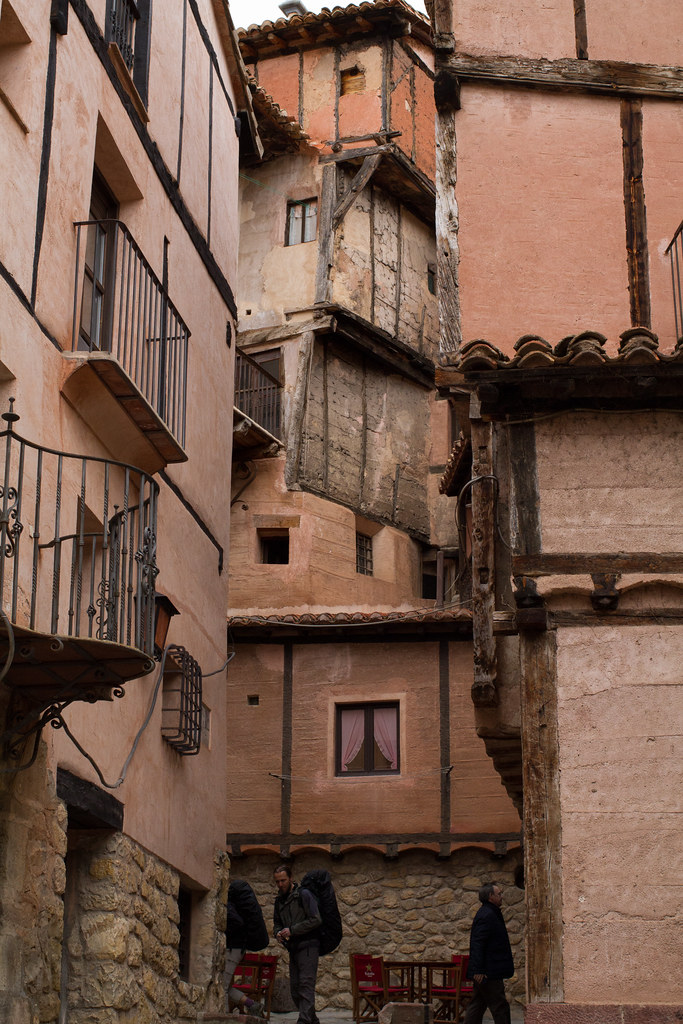 There were some buildings under construction in places, but I thought the village as a whole was very well maintained. 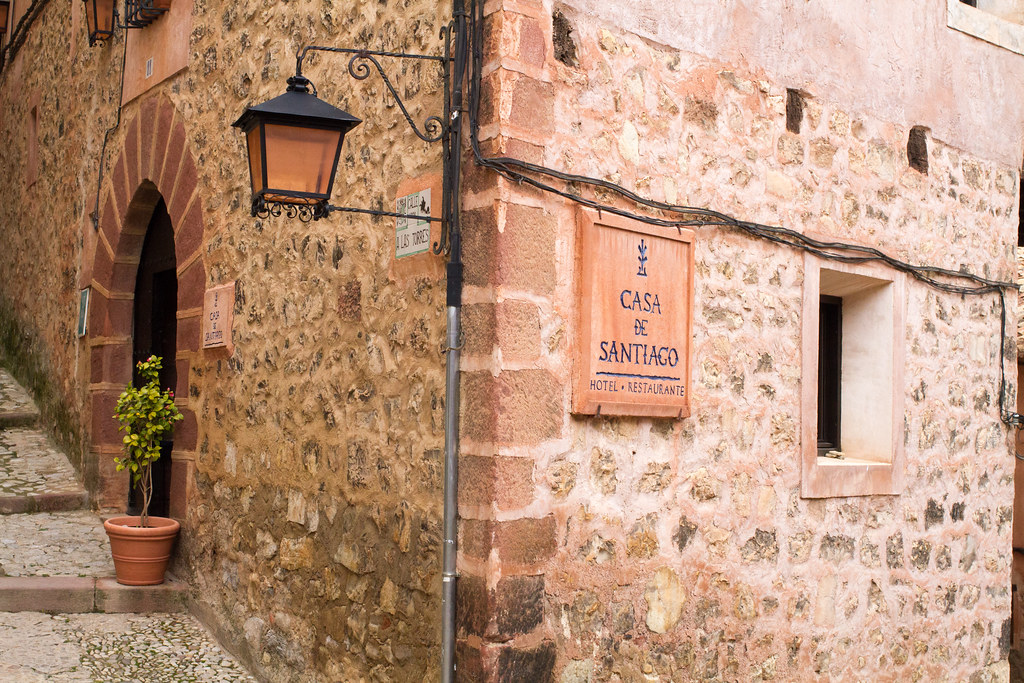 At any rate, there is not much advance information, so I got a map at a place that looks like a tourist information center. But it didn’t help me much because I have Google map.

But when you look at it this way, you can see that there were parking lots everywhere. However, it is the first time to come to the village, and there is no way to know such a thing immediately after arrival.

Well, first of all, we went to the Plaza Mayor, the center of the village. 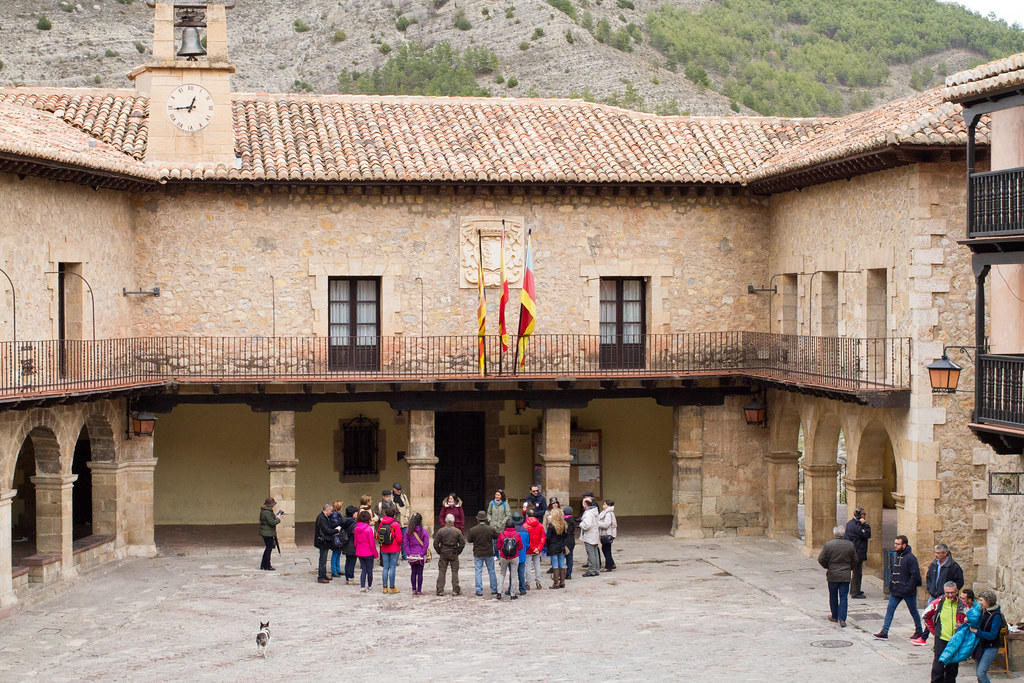 It is a very convenient starting point for sightseeing because there are souvenir shops and banks here. I visited many villages later, but I can say that this village is relatively convenient. 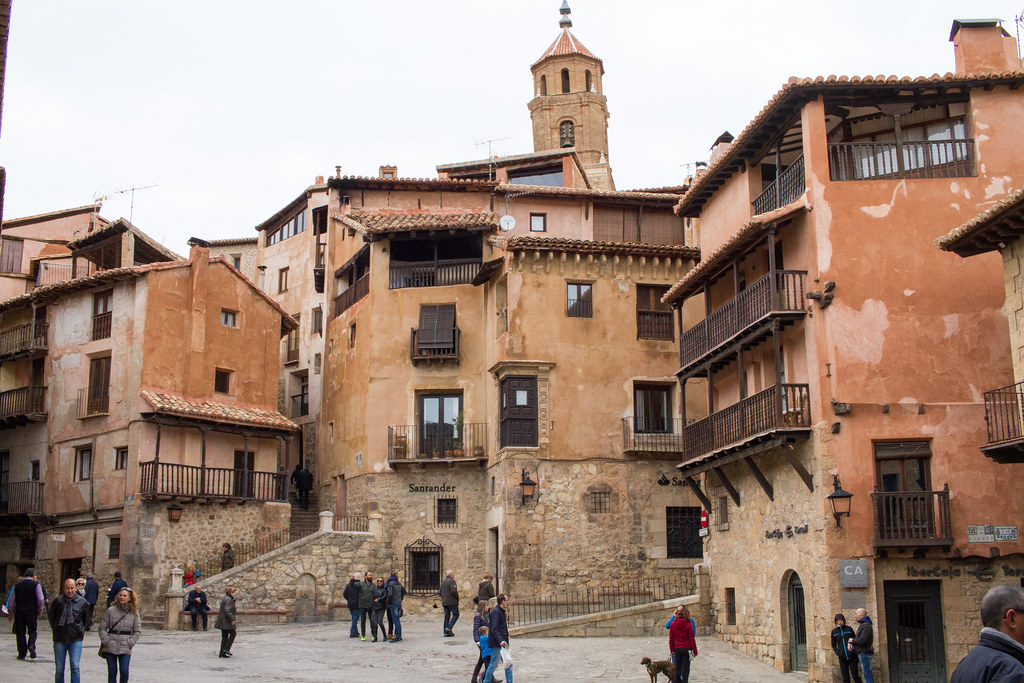 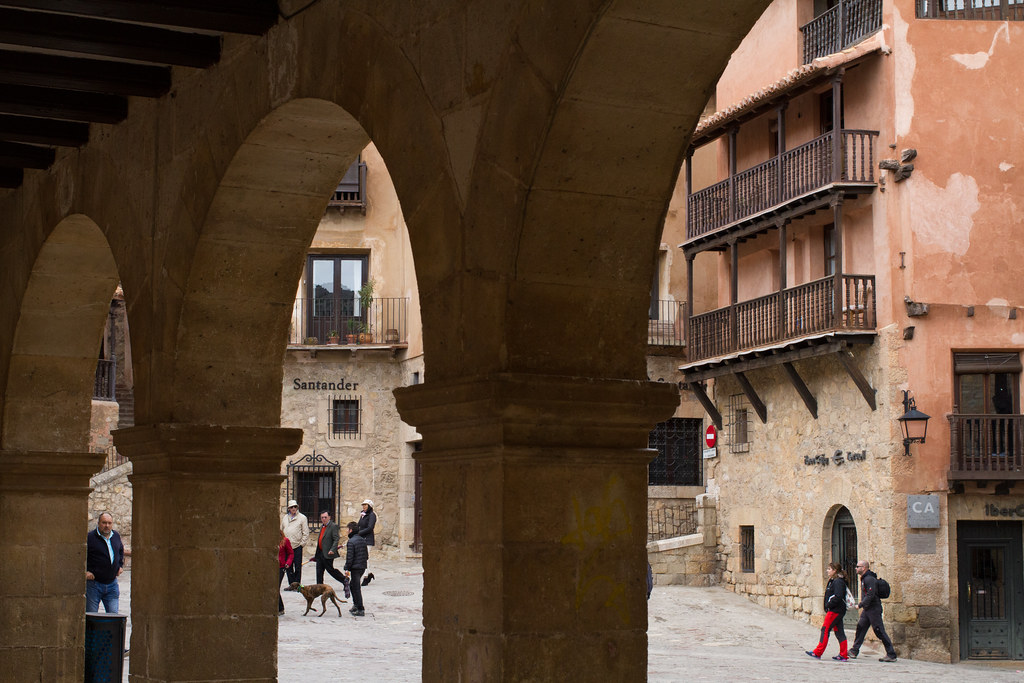 Near this square, there is “Iglesia de Santiago” (Santiago Church). Here is a distant view. 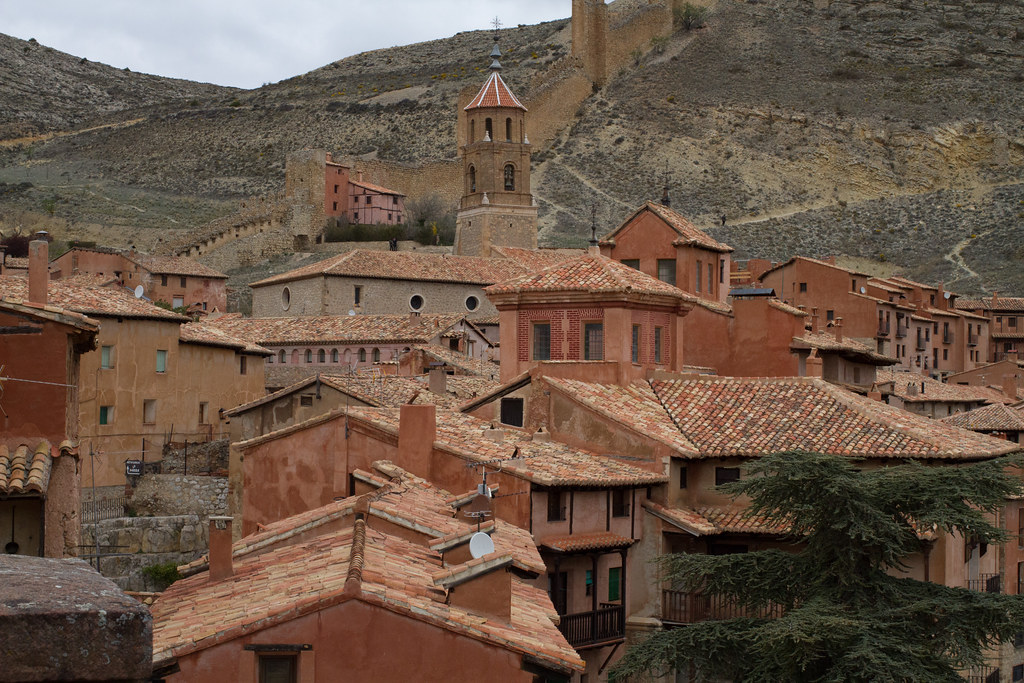 The inside was normal, so they didn’t seem to be taking any photos. I tend not to take many pictures inside the cathedral these days.ß

On the opposite side of this church across the Plaza Mayor is the “Castillo”. It looks like a church. The design of this roof is very impressive. It seems to be influenced by Islamic architecture (Mudejar architecture). 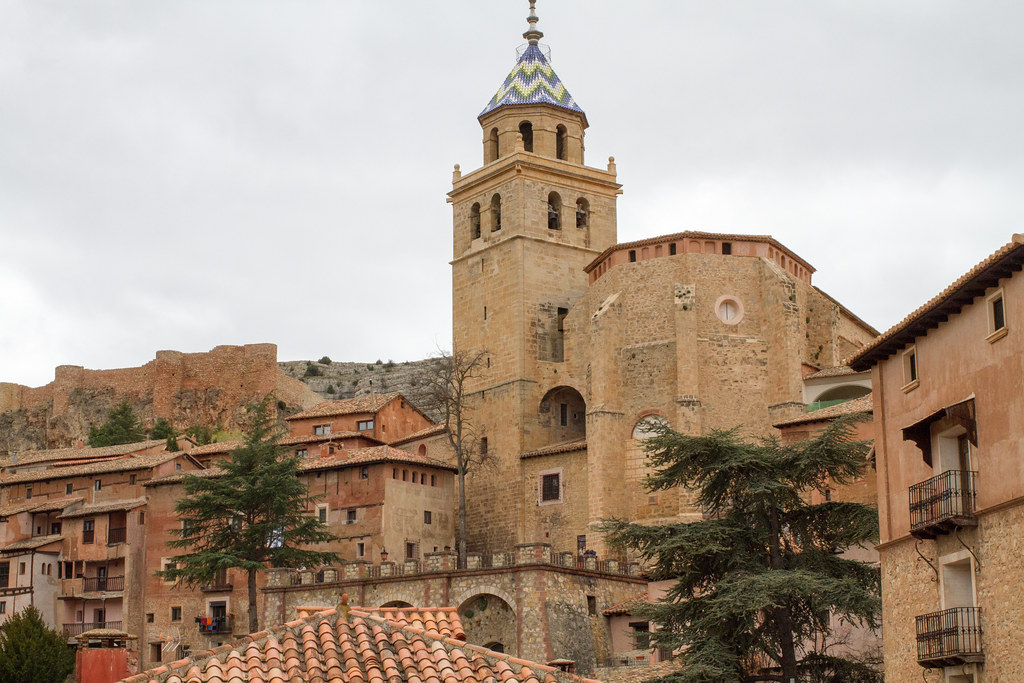 I got lost trying to get back to the parking lot.

This was a bit humiliating, I think… This Albarracín is quite complicated and big. I don’t often get lost even when I visit a place for the first time, but this time I really wandered for about half an hour. I was so excited to see the beautiful village in Spain for the first time that I didn’t check the parking place before I went sightseeing.

But on the other hand, I found the beautiful villages in Spain to be larger in scale, though not as large as in Italy. This is a big difference from France.

2016 GW Spain Trip No.20: Roncesvalles Burgess, a bit of a pilgrimage route

Chardeneux – Tour of the most beautiful villages of Wallonia No.14 – ★★☆☆☆

La Neuveville (La Neuveville) Tour of the most beautiful villages in Switzerland No.11 ★★☆☆☆☆