This is probably the most famous of the most beautiful villages in Switzerland. As a famous tourist destination, it may seem a bit mundane at times, but it is definitely the number one recommended village for its ease of access, accommodation and restaurants. Our overall rating on this site is an unqualified five stars!

The most famous and most beautiful village in Switzerland

“You’ve probably heard the name Gruyère before. Yes, it is Gruyere cheese. Gruyere cheese is used for cheese fondue, which is one of the most popular dishes in Switzerland. Of course, this cheese is made in Switzerland. It is a French-speaking area. The village itself has a long history. It is said to have been inhabited before the Middle Ages like other areas in Switzerland, but as far as there are records, the Count of Gruyère started to live here at the end of the 11th century and continued until 1554. From 1554 onwards, his descendants were granted independence, but formally they were still under the control of the Savoie family.

We decided to stay here because it is the most famous and beautiful village. Because of its fame, accommodations were crowded, but we managed to arrange a hotel facing the central square. It was relatively expensive. There were many parking lots before entering the center of the village. What? I forgot whether there was a charge. In any case, you won’t have any trouble.

Many shops, but a good balance without spoiling the scenery

We arrived in the evening, when it was almost dusk. Unfortunately, we were not blessed with good weather, and it was rainy or cloudy including the 20th of the next day. Still, the beautiful cityscape is still there. 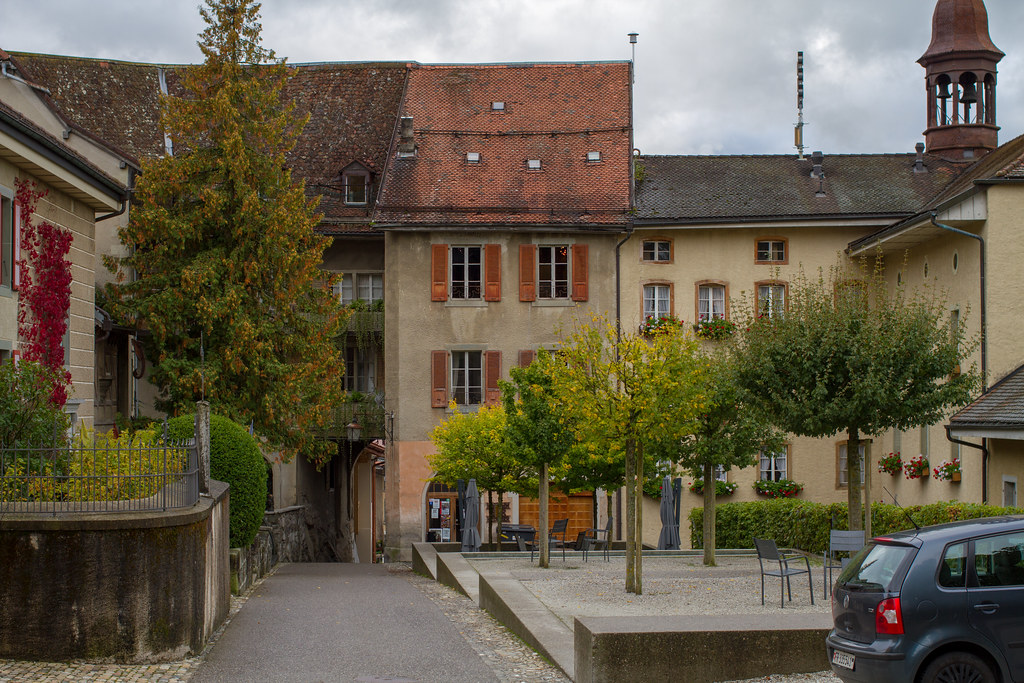 For dinner, we also chose the local specialty “cheese fondue”.

We had a lot of trouble deciding what to do for dinner, but in the end we decided to use the restaurant at the hotel where we were staying that day. I think it was 10% off if we used the hotel facilities…. I don’t remember the discount rate, but I’m sure it was cheaper. Well, I ordered cheese fondue menu. This is the first time for me to eat this in Switzerland, I used to eat raclette more than 10 years ago in eastern Switzerland. This is also a famous Swiss cheese dish. Both are slightly different in style, but they are the same in that you eat the hot melted cheese with bread, boiled onions and potatoes. Of course it was delicious. But I think I can taste it in Japan too.

By the way, I wasn’t sure about the wine, but I chose a wine from the Valais. I remember it was a blend of mainly Merlot and other popular varieties.

There was not much to see in the castle, but it was a waste of time (excuse me!). There was a hall to watch a video about Gruyere, which was very splendid. I saw it alone, though it was quite large. I was rather grateful that they showed it just for one person.

The content is mentioned a bit above, but the main focus was an introduction to the history of this village before and during the Middle Ages. It also touched on some of the history of Switzerland. I think there were screenings in English, French and German. I listened to it in English. The view of Gruyère Castle from a distance is spectacular. Yesterday we arrived in rainy weather and in the evening, so we couldn’t see it clearly from a distance, but the next day, right after we left the village, we drove to find a spot where we could get a good view of the castle. There was a lot more traffic on the surrounding roads than I expected, and I had a hard time finding a place to park, but I was able to get the shot below.

And by the way, chocolate is delicious.

By the way, Gruyère cheese is famous, but chocolate is just as delicious. There were some chocolate shops in the village square. In this season, Switzerland is cool or rather cold, so I bought a lot of chocolates without any problem.

Of course we tasted it right away, it was delicious. Of course we bought enough for souvenirs, but we also made sure to buy enough to eat in between driving. I think we had enough for a few days.

It’s a famous tourist destination, so it can be a bit mundane, but it’s definitely the number one recommended beautiful village in terms of accessibility, accommodations, and restaurants. Our overall rating on this site is an unqualified five stars!

Date and time of visit:.November 1, 2014.This was the third day and the last day we could do a full day of sightseeing. ...

April 2017 Travel to Western Spain and Portugal Part 4: Other Places to Visit No. 4 – Amarante

Date of visit: October 14, 2011, around 12:00 p.m.This is the last of the Marseille diaries.We decided to take a cruise ...
Grimentz, Switzerland’s most beautiful village tour No.9 ★★★★★
May 2018 France excursion record: the stage of Paris-Roubaix, Velodrome and Alambert
Home
Most beautiful villages of the world
Copied title and URL