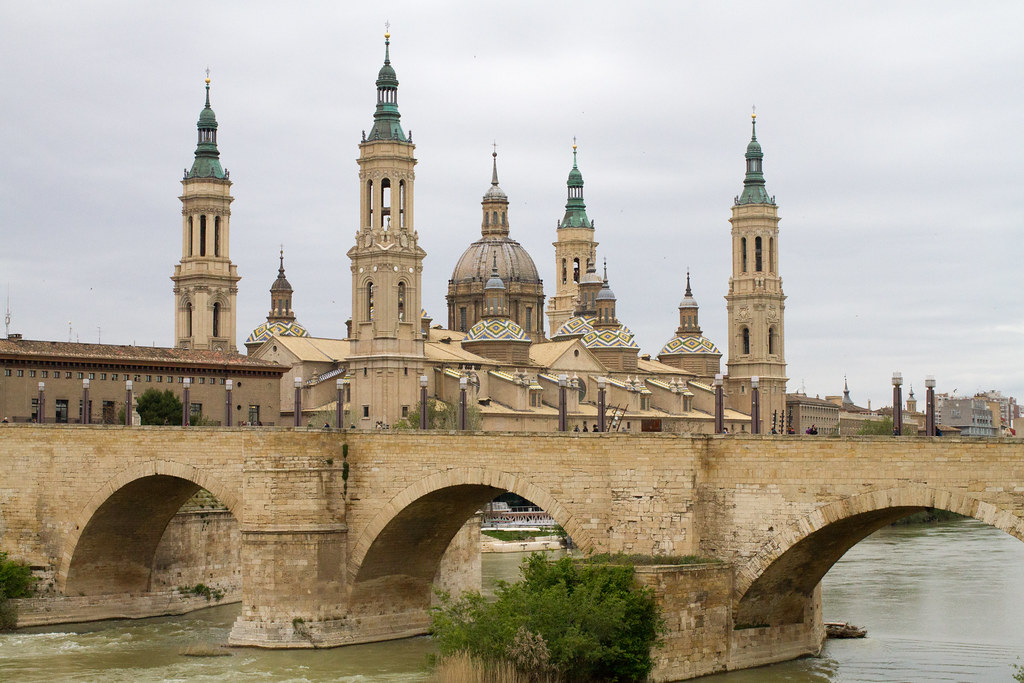 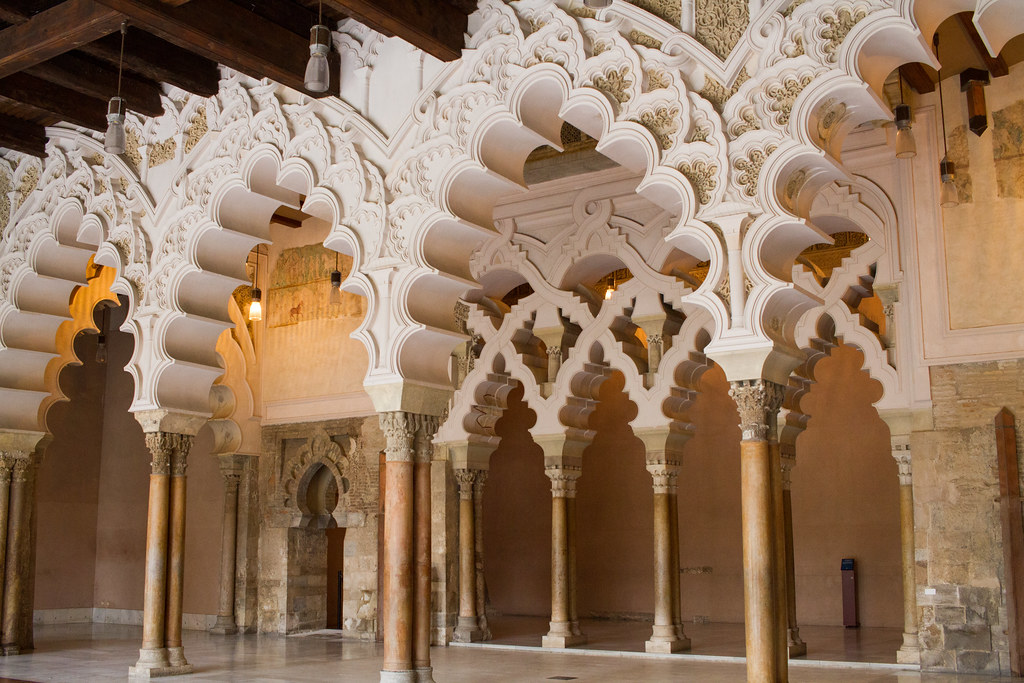 The ancient capital of Spain, but a bit half-hearted?

I’ve fallen behind on my updates due to my July 2016 trip to France, but I’m still working on my 2016 GW trip report. I wonder when in the world I will be able to start on the France trip….

1 night in Zaragoza, the capital of Aragon

After Alquésal and Loare Castle, we chose Zaragoza, the capital of Aragon, and decided to stay here on the fourth day. It takes about an hour by highway from Loare Castle. It’s one of the cities that I’ve been curious about throughout my past several trips to Spain, and I was finally able to visit it.

The location of Zaragoza is around here. I guess it’s between Madrid and Barcelona.

Like Teruel, where we stayed on the second day of this trip, Zaragoza is also a city with buildings in a style that combines the architectural style of the residual Muslim “Mudéjar” and the Christian architectural style after the Reconquista, and is part of the World Heritage Site “Mudejar Style Buildings of Aragon”.

1 night in a cheap hotel near Pilar Square

We arrived in this town at 3pm, and considering the size of the town, it seemed like a good idea to stay here for the day. So I booked a hotel on booking.com from the parking lot of the Castle of Loare, and then headed directly to the hotel. The location of the hotel is just a minute or two walk from Plaza del Pilar, the center of Zaragoza. In spite of that, it was very cheap for some reason. Fortunately, the hotel provided us with a 24h ticket valid for parking in this parking lot for 10 euros. After all, hotels and parking lots are cheap in Spain.

“Pilar Square and the Church of Our Lady of Pilar, La Seo, are both closed to photography!

We parked the car and went to the hotel. After checking in, we started sightseeing in the city. First of all, we went to Pilar Square, the center of the city. Speaking of Zaragoza, this square is very big. It is very wide. 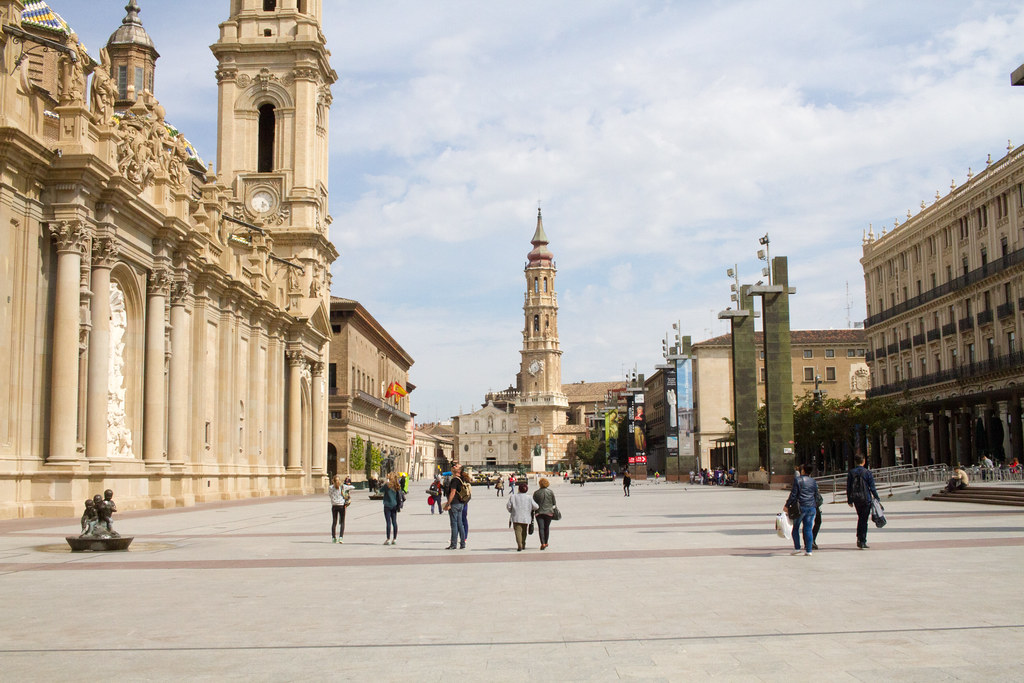 By the way, if you look the other way, you will see this art. The underground parking lot where I parked is right below this. 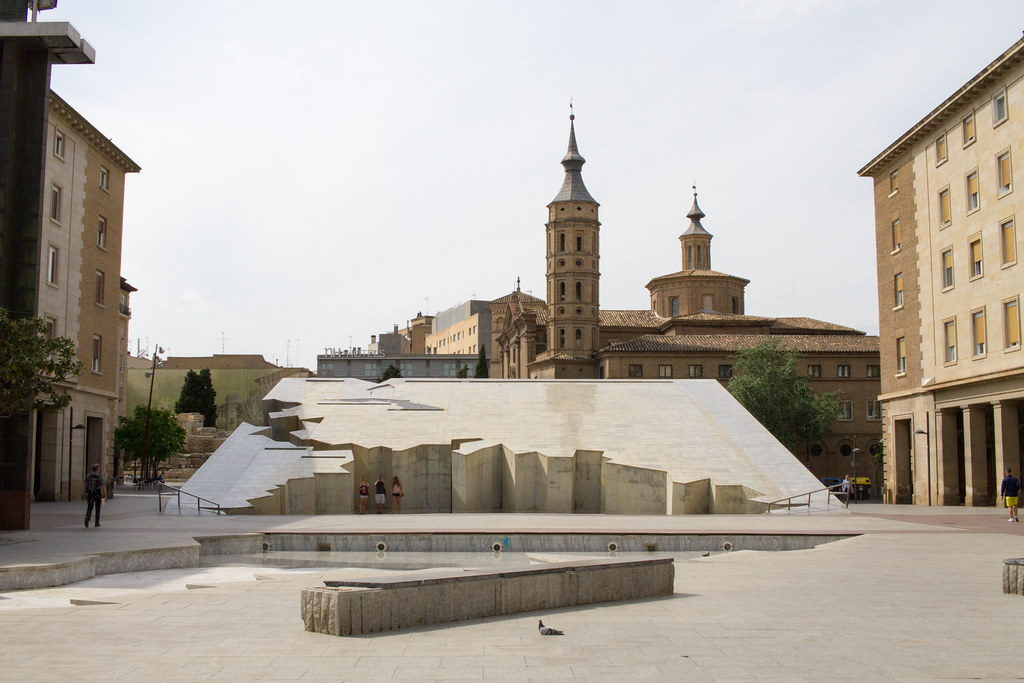 There are two famous cathedrals here, so I decided to visit them. However, it was prohibited to take photos inside both of them…. So the photo is only the outside taken from the square. But both of them were very nice cathedrals.

Goya Museum, Goya was from the suburbs of Zaragoza

We didn’t start sightseeing in Zaragoza until around 4 p.m., so there were only a few things we could see on the day we arrived. Besides the two cathedrals, we could visit the Goya Museum, which was located behind the Pilar Square. 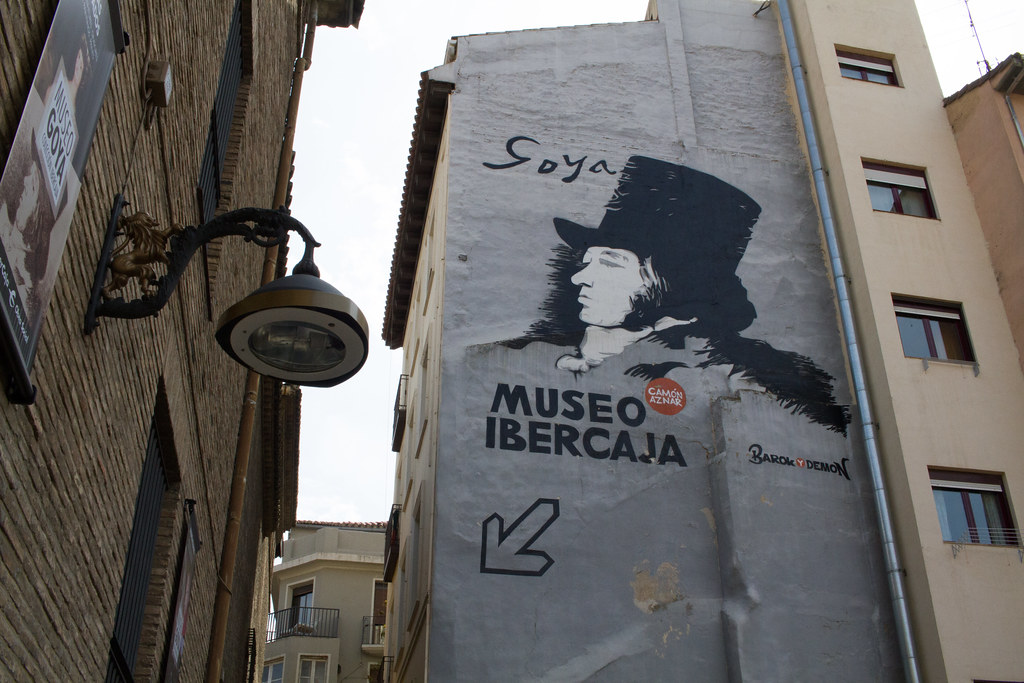 Speaking of Goya, his “Maya” series, which is in the collection of the Prado Museum, is very famous. He studied painting in Zaragoza, and later became active as a court painter for the Spanish royal family.

The Goya Museum in Zaragoza, which can be said to be his hometown, honestly wasn’t very good (laughs). It didn’t leave much of an impression on me. After all, Prado? There is also a Goya museum in Castres, France, but the number of works is small and the word of mouth is not so good. I went to Prado, but I stayed at Castres and didn’t visit the museum.

It started to rain, so we finished sightseeing around here. Now, dinner, but the night in Spain starts late. So we took a nap at the hotel until 21:00, and then we went to a restaurant in town. I found this restaurant on TripAdvisor, and it was a 5-minute walk from the hotel.

What we had here was a carpaccio of cured ham and tomato. It was very tasty, but a little too salty.

And grilled suckling pig. They say that suckling pig dish is one of the typical Spanish dishes. It is very tender and has few habits. The sauce was very sweet and honey flavored, which went well with the tender meat.

Well, dessert was “flan”, or pudding as we call it in Japan. This might be the best flan I had in this trip to Spain.

Unlike crème brûlée or soft Japanese pudding, I prefer hard pudding with a firm texture.

The restaurant here was a little salty in taste, but overall it was very good and I could see why it has a good reputation. I was satisfied to choose a good place. By the way, I had the impression that there were many businessmen here. I wonder if it’s because it’s an office area nearby. I think there were many people speaking English and French.

After returning to the hotel, I fell asleep.

Aljaferia, a palace from the Islamic era

The next day dawned. I went to see Aljaferia Palace, one of the most famous sightseeing spots in Zaragoza, which I couldn’t see yesterday because of time limitation. 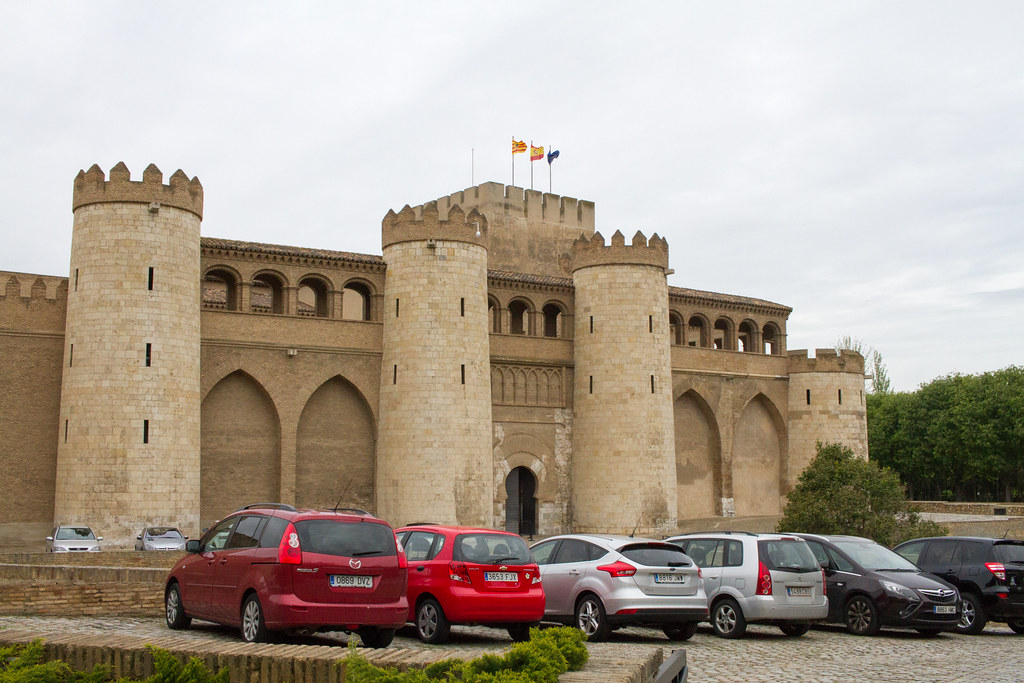 This palace is located somewhat away from the main square of the city, Pilar. However, it takes about 10 minutes on foot. My car was in the underground parking lot of Pilar Square, so I left my luggage in the car and went to this palace. I arrived a little earlier than the opening time of 10:00, so I waited near the entrance until it opened, and then it opened, and I entered at the same time as it opened, so I was the first one. We were the first ones to enter the palace as there was no guided tour.

First you enter the palace, the courtyard. 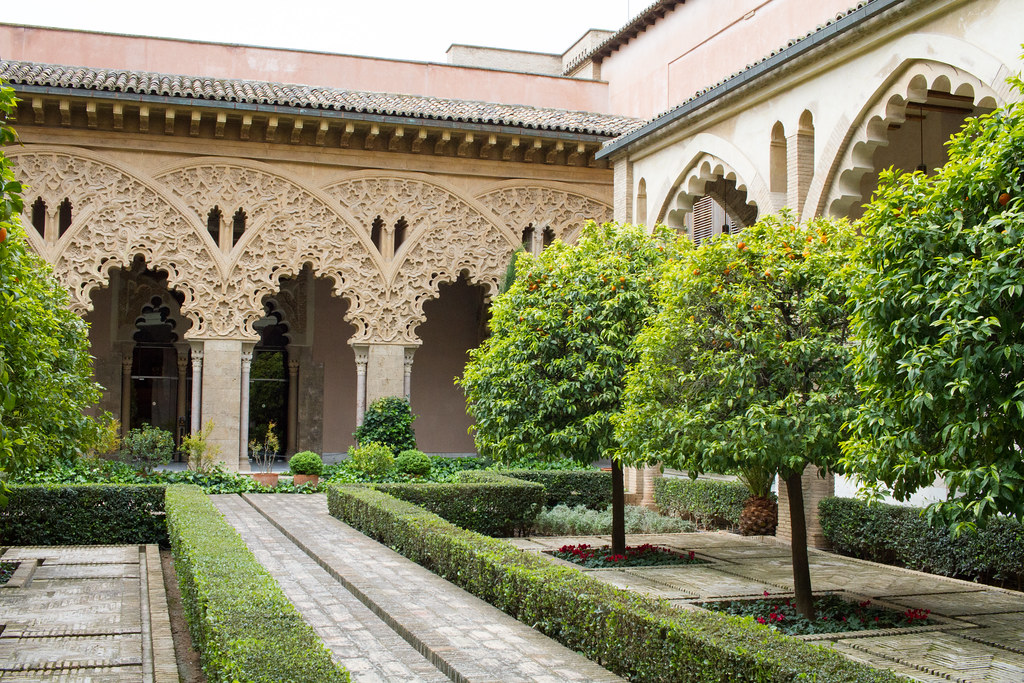 And just to the right is the very beautiful Palace Room. 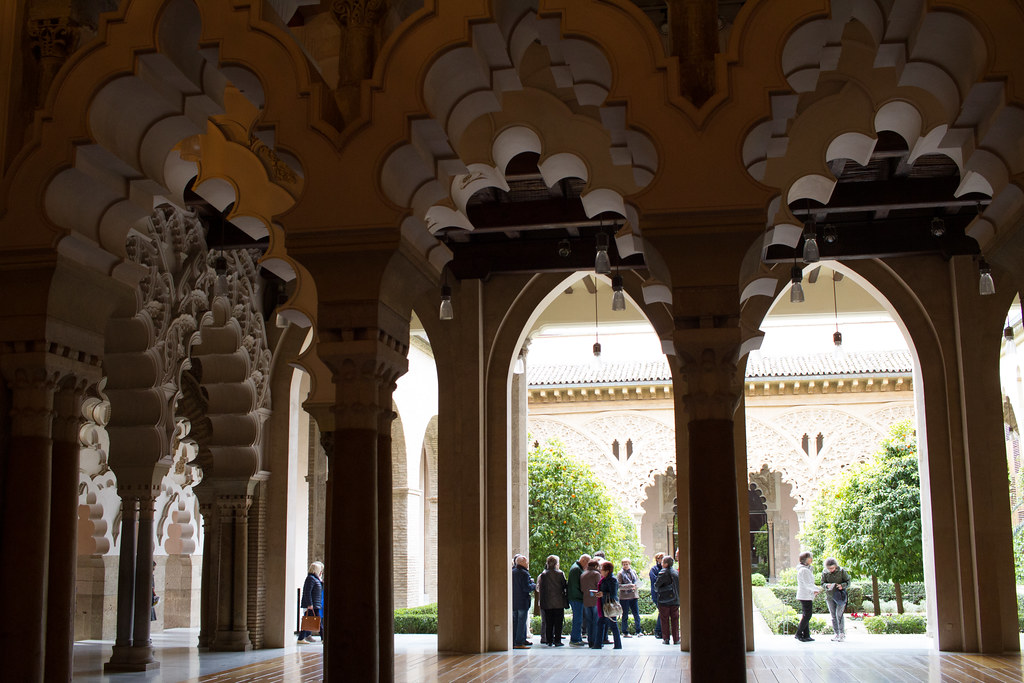 The history of this palace dates back to the 9th century. Initially, it was used as a palace during the Islamic period. The style of the following picture was designed in the 13th century, when it was ruled by Islam.

The exhibits inside were also substantial. But I couldn’t understand the details because it was in Spanish. In addition, I wrote this blog based on the French pamphlet I got there. (Please understand that there may be some discrepancies in the information because of my lack of language ability. I will correct it as soon as I find out. 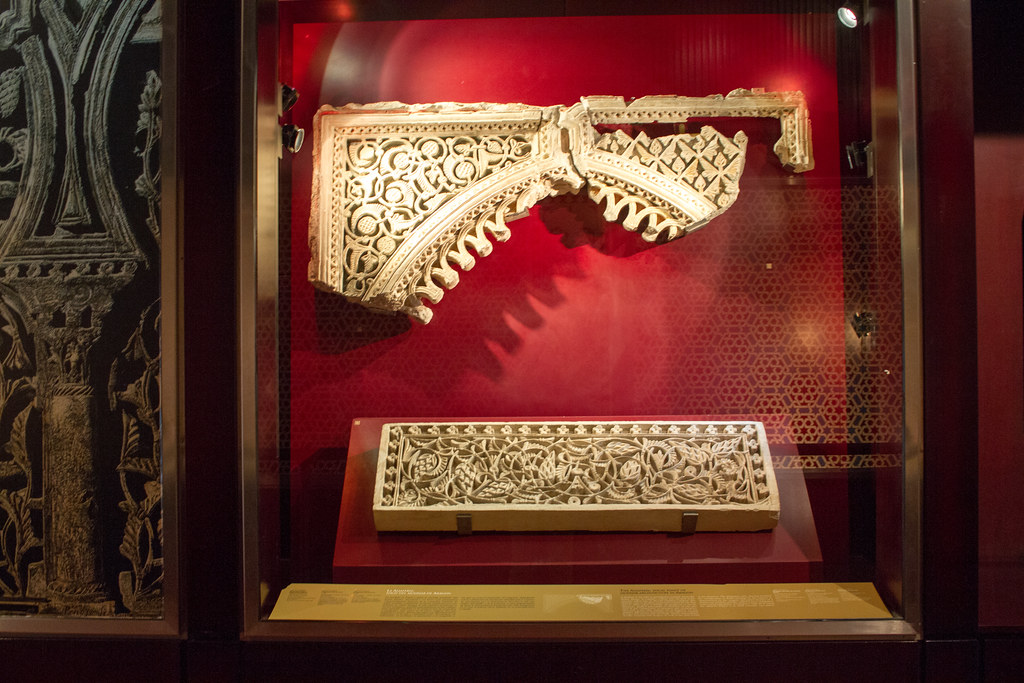 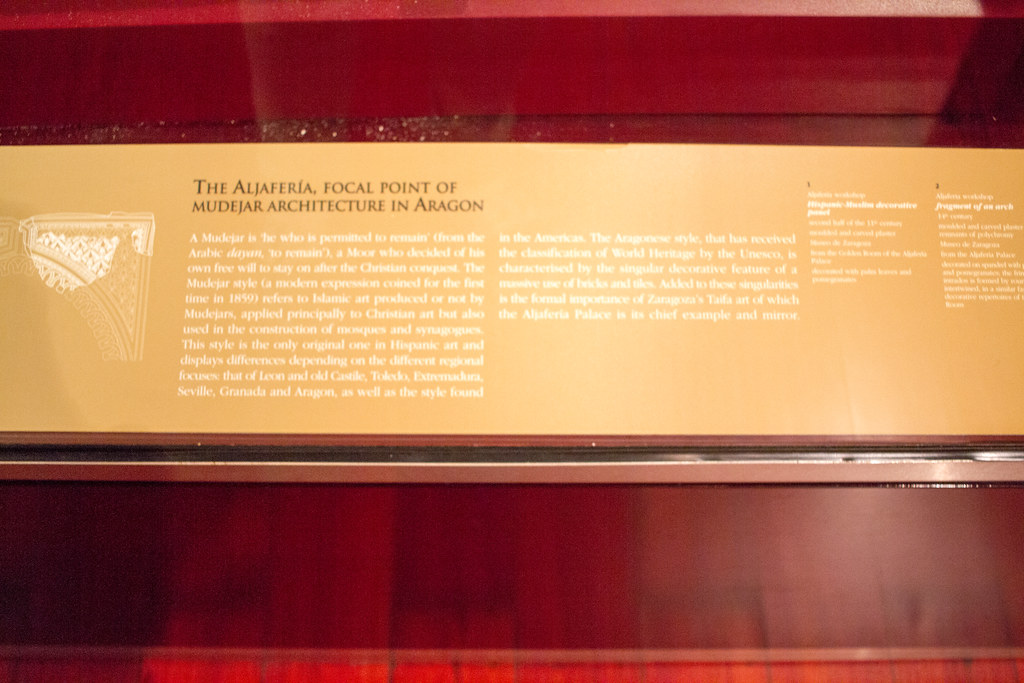 By the way, the outer wall of the palace as we see it today was simply to protect the palace, but it is so strong that even though it is a palace, it looks like a fortress. 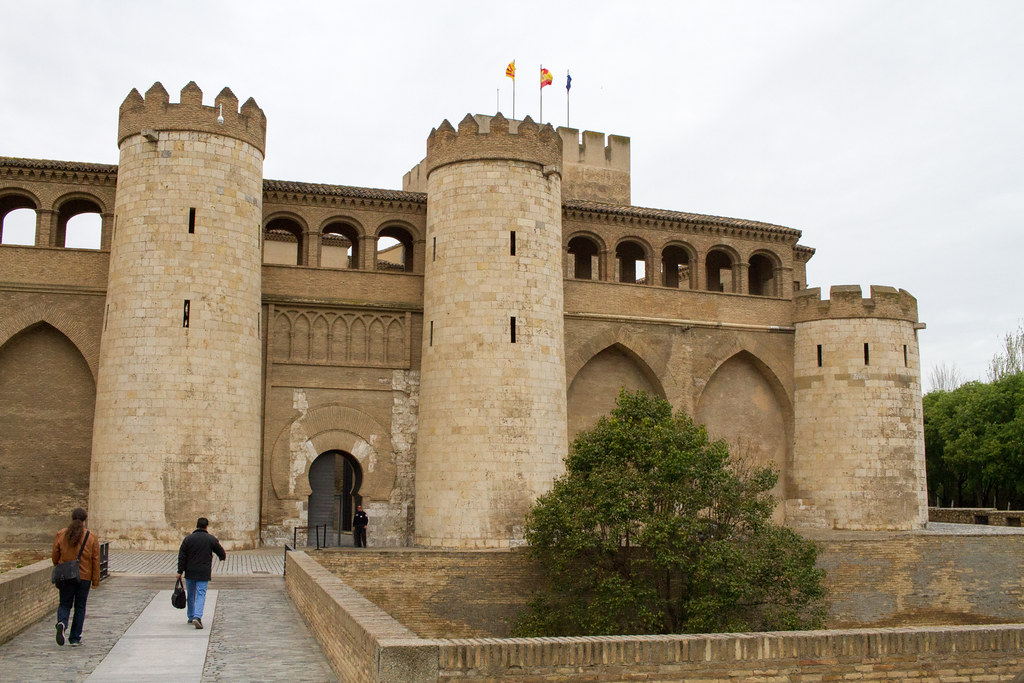 Later, the area came under Christian rule by the Kingdom of Aragon, and although the palace was covered with Islamic buildings to show Christian power and authority, it was also influenced by the Mudejar style and later by the Renaissance, and became known as the most important architectural style known as “Rois Catholiques”. It is said to have become known as the most important architecture of the style. However, I was not sure which part of the building was in this architectural style: this part of the first floor (second floor in Japan)? 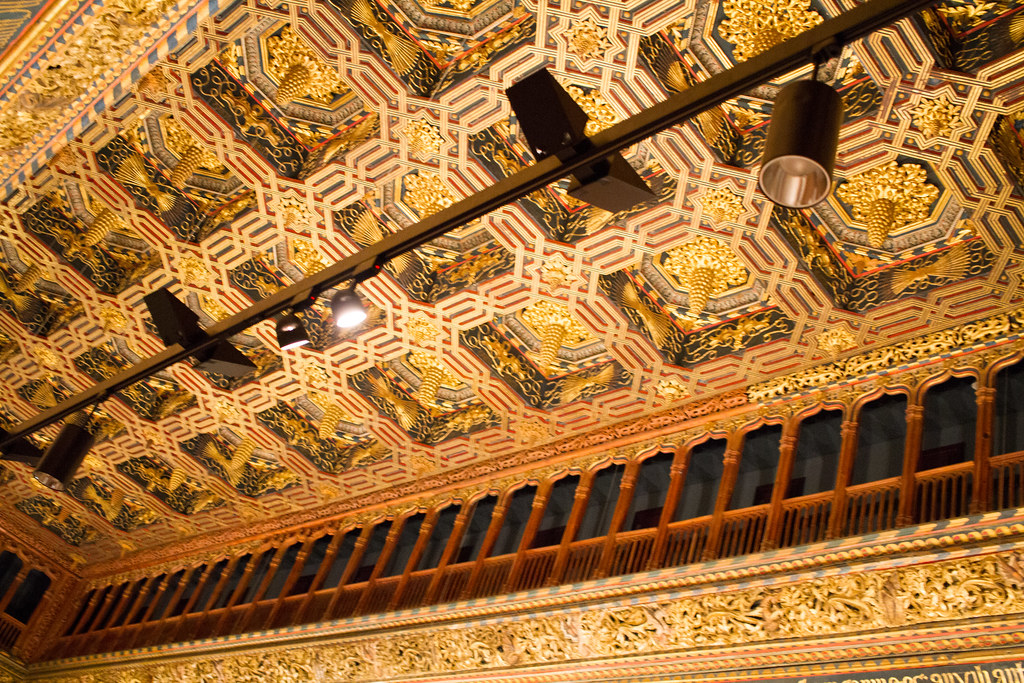 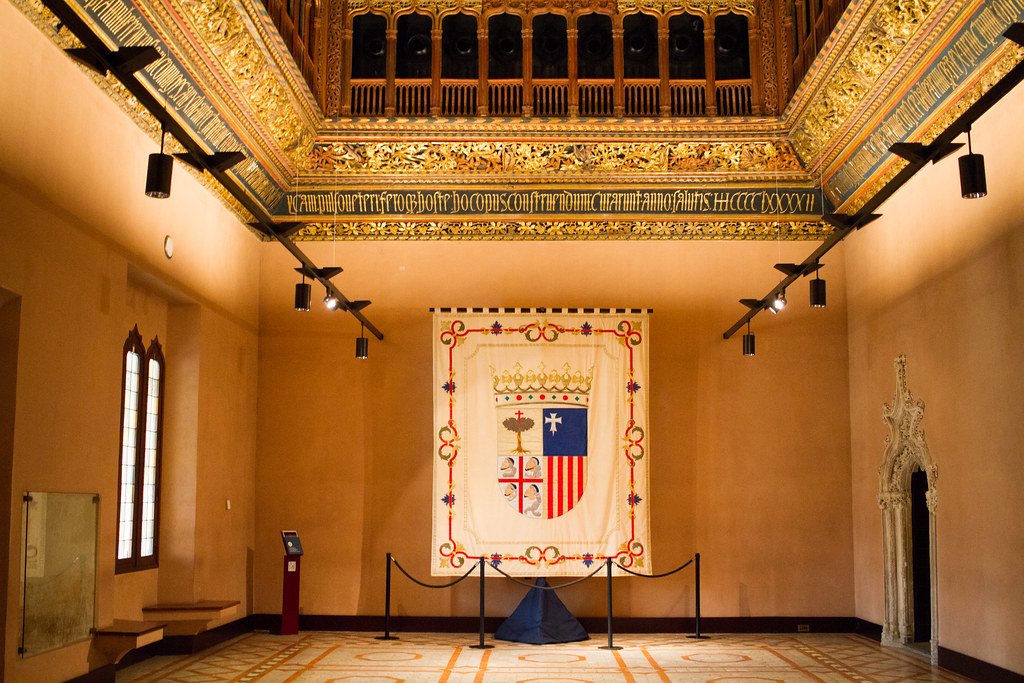 By the way, on the landing of the last staircase, there was a family tree of the Kingdom of Spain, which was formed from the Kingdom of Aragon, the Kingdom of Castile, and the two of them. Furthermore, the family tree which summarized the relationship between the descendants of those two kingdoms and the British royal family in an easy-to-understand way was very well done. 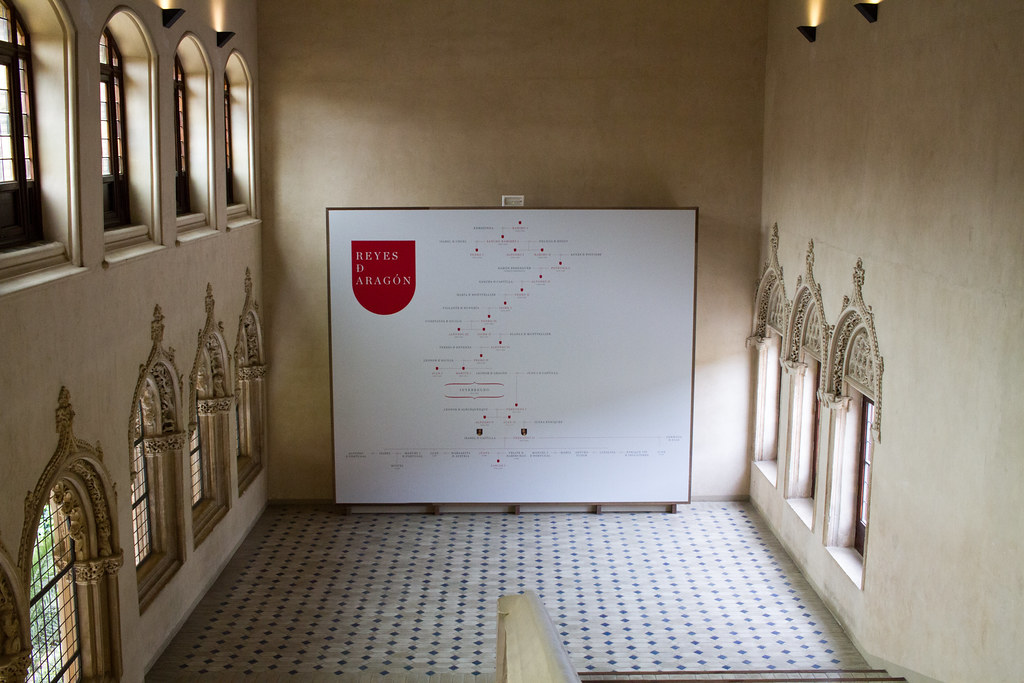 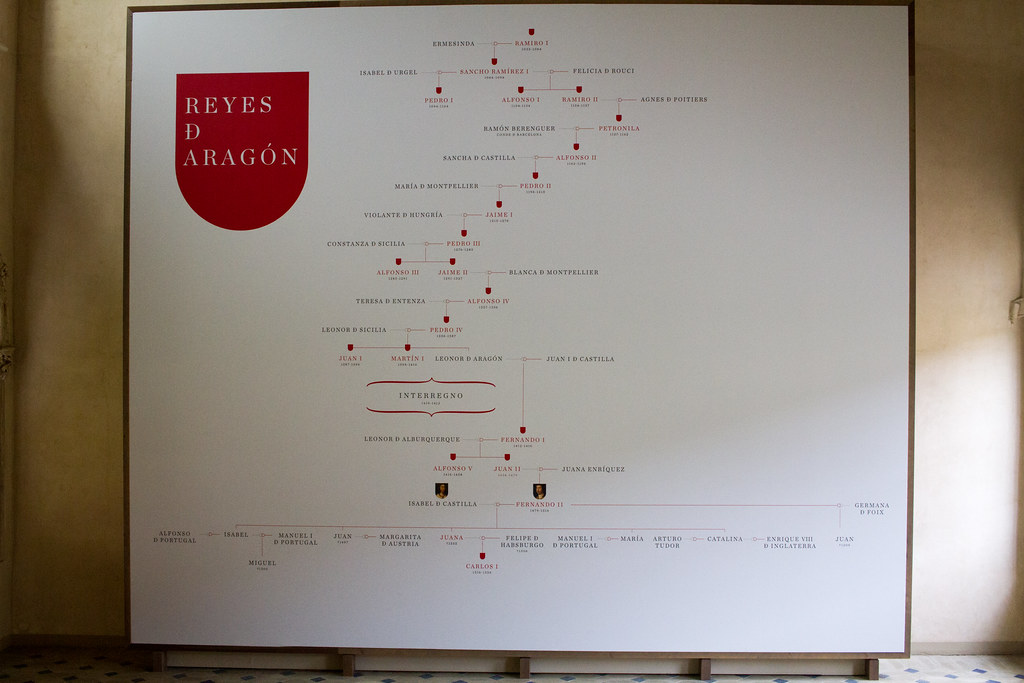 Coincidentally, the day before I visited the palace, I tweeted on twitter that I was in Aragon, and a friend of mine who lives in the UK replied, “Aragon, as in Catherine of Aragon? It’s really true, Catherine (Catarina in Spanish) was born as the youngest child of King Fernando of Aragon and Queen Isabel I of Castile, and later married King Henry VIII of England (Enrique VIII in Spanish). You can see it at the bottom of this family tree.

There are many episodes about Catherine of Aragon, so please refer to other documents for more information.

In any case, I was able to learn and re-learn a lot about European history here again. I really enjoy this kind of learning when I travel in Europe. That’s why it’s hard to stop.

This is the end of sightseeing in Zaragoza. There were some places to see, but I felt it was a little halfway. Considering that Zaragoza is located between Barcelona and Madrid, and it takes only two hours to travel between these two cities by train these days, it is not easy to stop by. Nevertheless, the food was good, and the Alhaferia Palace we saw at the end of the day was very worth seeing, so I’m very glad we stayed overnight.

No.10 Toledo, Madrid and Segovia: 2008 Spain and Portugal

The mainland No.8 World Heritage: Archaeological Sites in Olympia Part 2 -2012 Greece No.24

What I think is good about coming to Greece is that the archaeological sites and the museums are relatively close to eac...

Date and time of visit: July 21, 2016, around noonA landmark that just became a World Heritage Site during the trip.I wa...