Well, the first day of sightseeing in the city of “Noumea”, the capital of this island located in the south of the main island of New Caledonia. Noumea city tour is also done on the 22nd and 23rd after the island tour. I will try to describe the image of Noumea in a simple way.

Getting to & from Tontouta International Airport

Getting to & from Magenta Airport

For travel within New Caledonia, the Grande Terre, the outlying islands and the Loi Yote Islands (Ildepan, Uvea, Rif, Rare Maré), you can also fly. In this case, you will use the airport of Magenta (Aérodrome de Nouméa-Magenta) in Nouméa.

You can find a lot of information on the web about “how to get to Magenta Airport from the center of Noumea”.

I had almost zero information about the In fact, at first glance, there is no bus stop or taxi stand at this airport. There are no taxis parked at the airport at any time.

It is easy to find because it is also written in Japanese. By the way, New Caledonia is convenient because there are Japanese annexes everywhere. Well, most of the things you can understand enough in English.

By the way, there was no Uber.

This day was a Sunday. We spent the first day in this city. Anyway, we went to the center of the city. The area where we are staying, Ansebata, is located in the south of the city center. But this is more like the center of tourism. Beach and resort hotels are concentrated in this area.

The area next to Ansebata is the Citron Bay area. It’s a more resort-like area, and also more touristy. There seems to be a lot of restaurants, but I only drove through it, so I don’t know what it looks like.

But the sunsets we saw from this area were amazing!

A look at the Ansbacher

Here’s a quick introduction to Ansebata, where I stayed for 4 days and 3 nights. If you are looking for something resort-like, Ansebata is the place to be. It is a district of Noumea city, but located on the south side of the city, facing the sea. It is the center of the resort and many hotels and many excursions are located here.

First our hotel atmosphere. We were taken care of for the first two days upon arrival.

However, the budget plan (the cheapest plan) is to stay in this apartment-like place just a little bit away from the facility.

The rooms are too plain and not resort like, but the view from the window is amazing.

The overall atmosphere of the Ansebata area, restaurants, shops, etc. is rather Australian and American. It’s not like France or Europe. However, there were a lot of people playing petanque near the beach, and there was an atmosphere like the south of France. As I mentioned above, many restaurants are resort-like, but I also saw French restaurants. I thought drinks were a little bit more expensive than in the center of Noumea, I guess it depends on the restaurant.

The location is also important (I don’t know the taste because I didn’t say…), the price is also quite high. I saw the menu list at the entrance, but it was certainly expensive…

By the way, the reputation on TripAdvisor seems to be not so good…

If you’re looking for a good meal, Ansvata doesn’t seem like the right choice.

How to get around central Noumea

The public bus is convenient to go to Noumea city. I didn’t know the timetable, but if you wait at the white bus stop like this, the bus will come sooner or later. The bus runs moderately, so you don’t have to wait for a long time. We were able to get on the bus after only 5 minutes of waiting. However, it was a beautiful day and the temperature was almost 30 degrees Celsius, so it was hard to wait even for only 5 minutes.

The bus will take you to the center of the city. There are two places to get off the bus in the center, depending on the place you want to visit. You can get off at either place because the city center is small.

We also went to the center on the 22nd and 23rd. This time, we drove from the hotel. I felt that the parking situation was quite good. There are many spaces in the city center and there are some places where you can pay even if you don’t park on the street. Credit cards are accepted.

On-street parking is by parking meter. It is easy to park on the street because there are places all over the city where a lot of space is secured as shown in the following pictures.

You can park for up to 2 hours in the center of the city and up to 3 hours in other central areas. The price is also cheap as the maximum is 300 francs. Saturday afternoon, Sunday and public holidays are free. I appreciate this.

First of all, the road in Noumea is quite complicated. There were many one-way streets. The structure of this area is similar to European cities. Also, there are many ups and downs. The amount of cars is also there. However, I don’t think there was a big traffic jam.

Now, in the center of Noumea, what we did in this area was a city tour. The center of the city is not a resort, but rather shopping and visiting the buildings that were built around the late 19th century when the colony began. There are also restaurants and cafes there. It is a so-called town walk. Be careful because it is hot in the daytime.

The tourist information center is located in the central “Place de la Cocotier”. This square is also a landmark when walking around the city, so be sure to stop by. In addition, from Saturday afternoon to Sunday, the whole town is quiet at once. If you just want to walk around, it’s not a problem, but it’s best to buy your drinks in Ansebata or Citron Bay before you go.

Old buildings from the 19th century include the Old Town Hall, a small music hall in Place de la Cocotier, and a few churches up the hill. All of them have a strong French atmosphere. It is very good for those who like walking around the city.

From time to time, you can find such explanatory signs near these historic buildings. It is convenient because there is Japanese notation, too.

By the way, the Old Town Hall next to the Place de la Cocotier has been turned into a municipal museum.

Here you can learn about the history of New Caledonia from the beginning of colonization to the First World War. It’s a small building, but the contents are so numerous and well organized that I was surprised and very impressed. 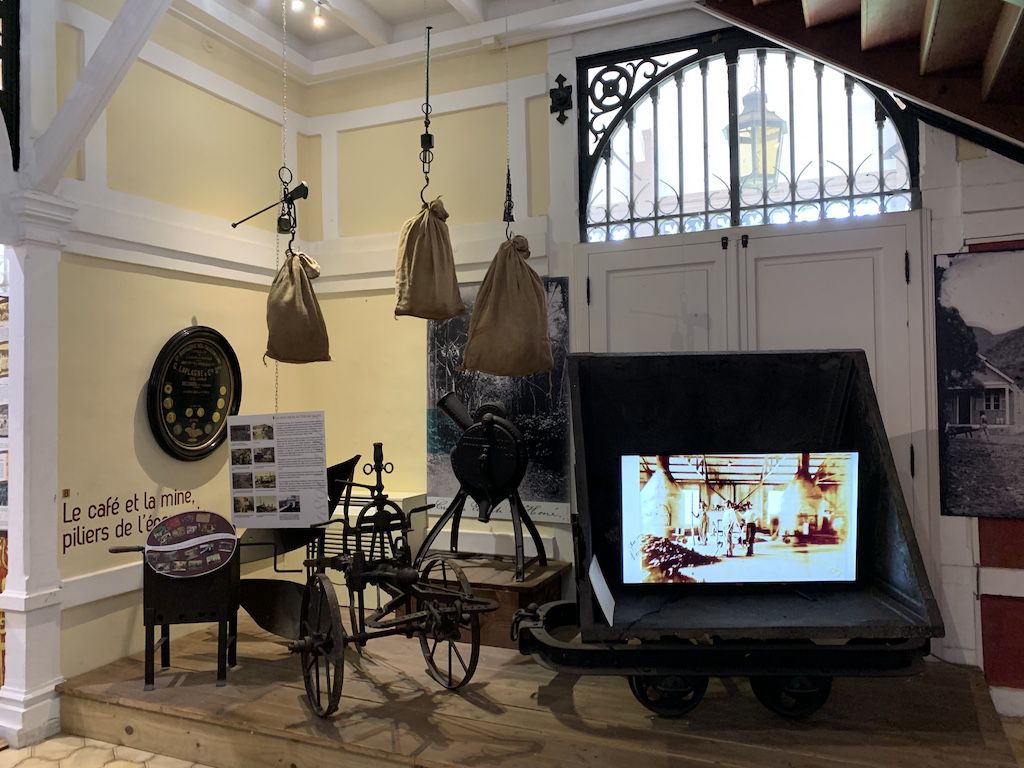 It’s not an old building, but the police station was stylish and nice.

I had two lunches in the old town, the second one was honestly disappointing so I won’t introduce it, but the first one was very good. The first time was on a Sunday, so the town was surprisingly deserted, and the shops were not open at all. However, restaurants along the harbor, near the ferry terminal, and facing the sea were open.

The location is here.

Great fish and chips too! The mayonnaise flavor was very French and delicious. The fish in the salad is chopped tuna. It was fresh, fragrant and delicious.

Oops, I didn’t drive the car that day, so I drank beer. They also make beer in New Caledonia. The brand name is “Number One”. In this shop, we could drink draught. It was very tasty with a solid taste of barley.

All in all, Noumea is a small town, so it is easy to visit, easy to move around, and easy to do individual activities. However, it is hot, so it is better to avoid walking in the daytime. Public buses run frequently and taxis are easy to catch, so you should use them.

A short drive north of the main island: trip to New Caledonia in March 2019, No. 7

Date and time of visit: 22 March 2019, approx. morningAfter a total of three days touring the Loi Yote Islands, I came b...

Visit date: March 18, 2019, overnightNew Caledonia is a beautiful island country in the South Pacific. It consists of a ...

The second of the Loi Yote Islands is Rif Island. It was the best place in this trip to New Caledonia. First of all, che...

History of New Caledonia, what we learned during our visit to the Municipal Museum and the World War II Museum: trip No. 9, March 2019, New Caledonia

This is the final installment of this New Caledonia travelogue. I'll write a dense content at the end. I'll write what I...

Go to Canal Island, which can be seen from the Ansebata coast: trip No. 8, March 2019, New Caledonia