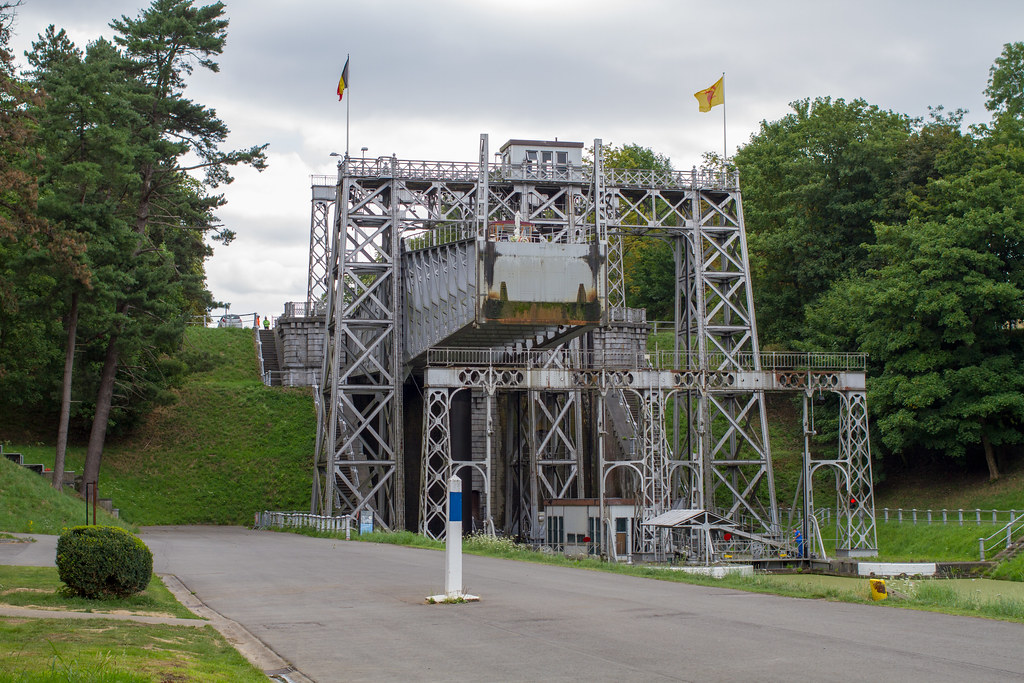 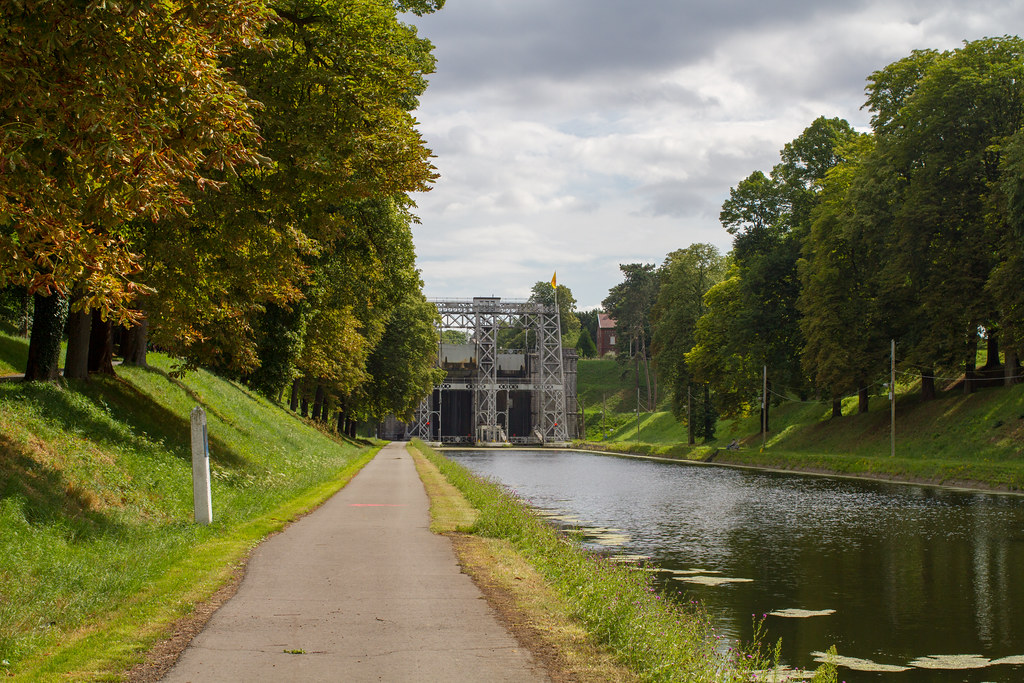 This day was the day to return the car. On the way to Lille from Brussels, we stopped at this facility. It’s a magnificent Belgian World Heritage Site, but I guess it’s not famous at all. Of course I didn’t know anything about it before I came here. But it’s definitely one of the most fun World Heritage sites I’ve ever been to!

One hour south of Brussels.

First of all, check the location. Belgium is a small country, so I guess you can go there by public transportation, but there are no remarkable sightseeing spots around, so it’s not likely to be covered in the guidebook.

Arriving there, I wondered why it was a World Heritage Site. You’ll soon find out.

At first, I followed the directions of Google Maps and came through the forest, but as I approached the site, it gradually became a gentle flatland, and I started to see many things that looked like factories in the Showa era in Japanese. Then we found a canal flowing slowly and widely. After 5 minutes of following the canal to the west according to Google Maps, we arrived at the first water gate. 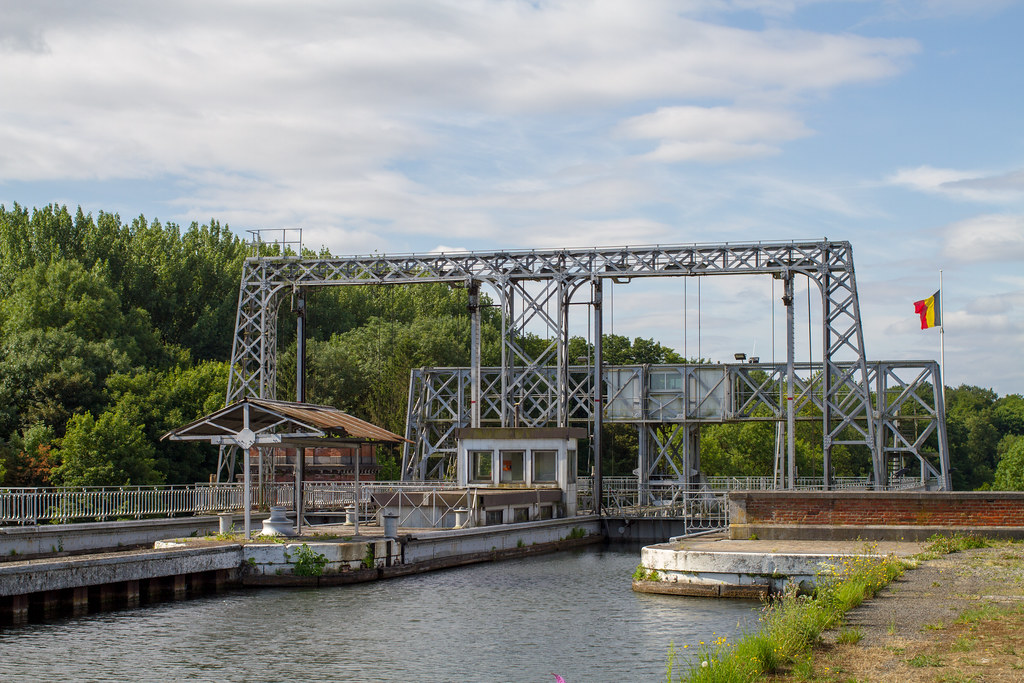 It is certainly more splendid than I expected, but at first I couldn’t understand why it was a World Heritage Site at all. It was built at the end of the 19th century, and I felt that this kind of architecture would have been quite possible in this era.

However, when I got closer and saw this sluice up close on the lower side of the canal, I immediately understood why. First of all, I was surprised at its height difference! 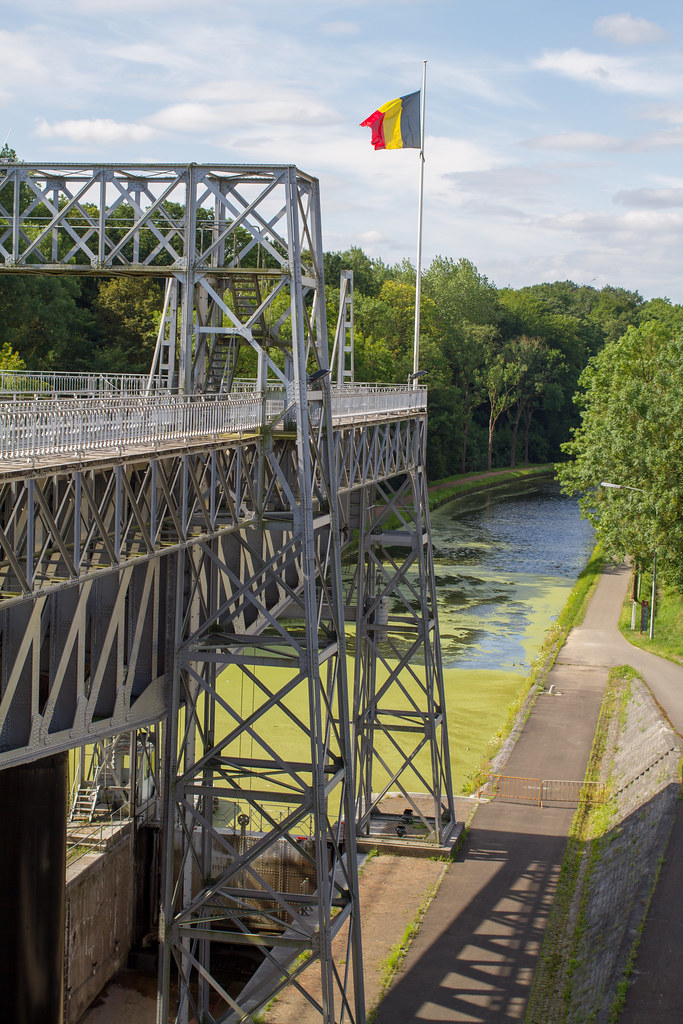 It looked like I could go down, so I did. Ah…, such an amazing device! What a huge ship elevator! 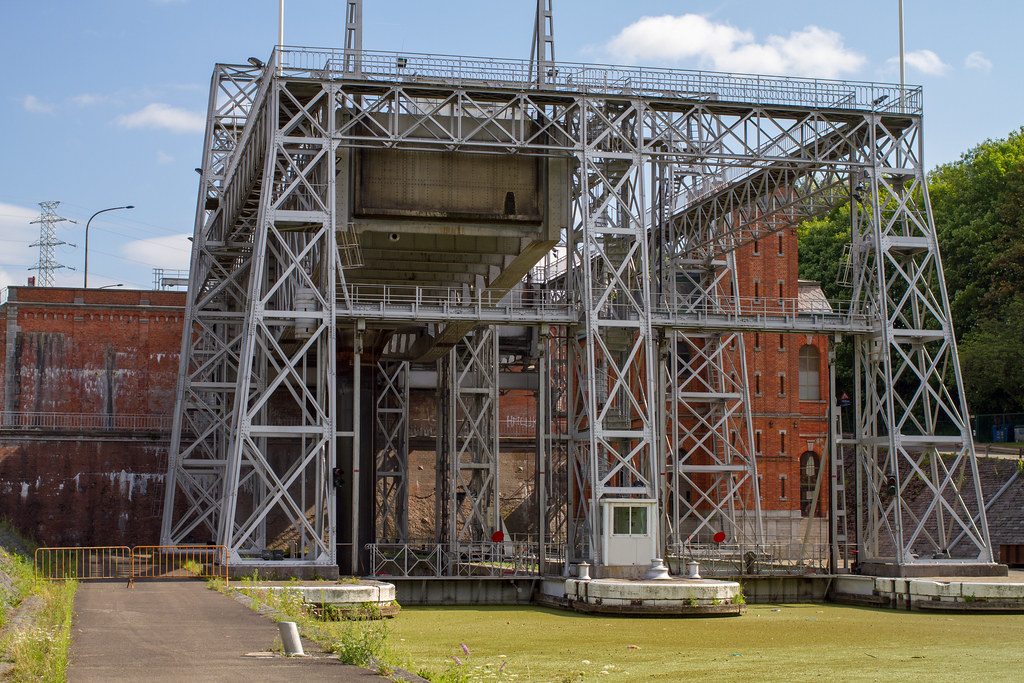 In the first place, the problem in building a canal is the difference in elevation of the land. If the canal has a difference in elevation, the water will flow like a river. If this is the case, a water source such as a lake is necessary near the upper stream like a natural river. However, since the main purpose of a canal is to allow ships to pass through for transportation, there is no need to generate a flow like a natural river. In other words, canals need to be built on a “flat” surface.

If this is the case, it is necessary to devise some way to eliminate the difference in water levels in the land. The method often used there is called a “lock gate”.

A lock gate is a device that divides a waterway with a difference in elevation into areas called lock chambers to raise and lower ships. A lock chamber has doors that can be opened and closed at the front and back of the waterway. First, only one of the doors is opened to lead the ship into the lock chamber. Then, the door is closed, and the water level is raised or lowered by opening or closing the water channel on the other side of the door. Finally, the other door is opened to allow ships to come and go in a canal with a difference in elevation. There is not always only one lock in one canal, but rather, in the case of a canal with a large difference in elevation, it is not uncommon to have a series of locks because it is necessary to raise the elevation of ships in stages. (From Wikipedia Canal)

On the other hand, in La Louvière, the difference in elevation of the land is covered by a “boat lift”, which is a method of elevating the boat itself. The boat lift is a result of the development of industrial technology in the 19th century, and in the latter half of the 19th century it came to be used in England, Germany and here in Belgium. 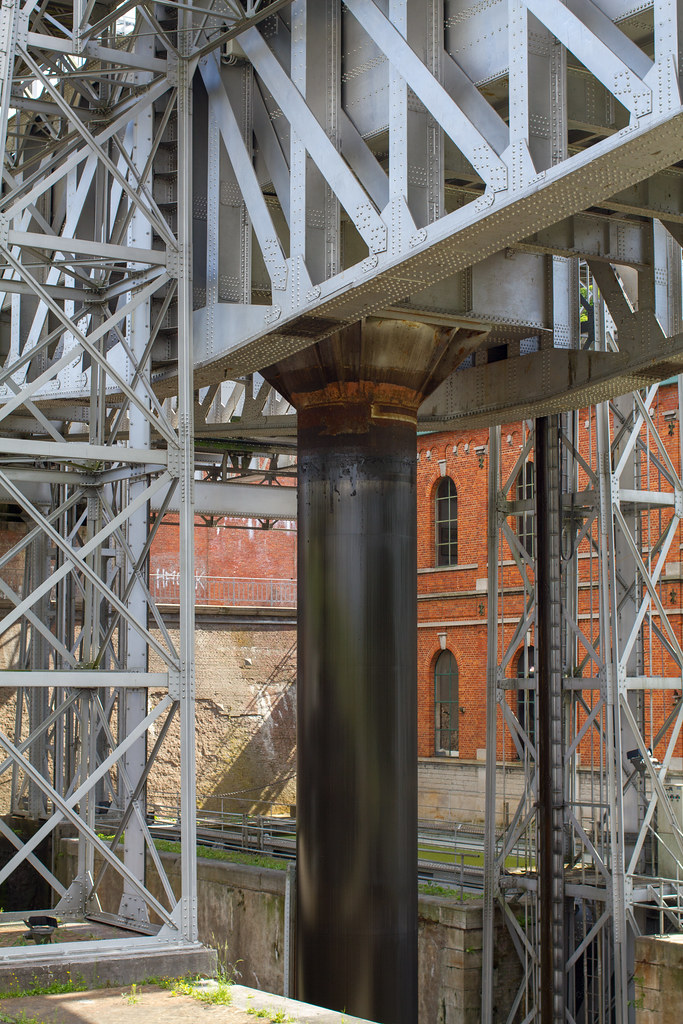 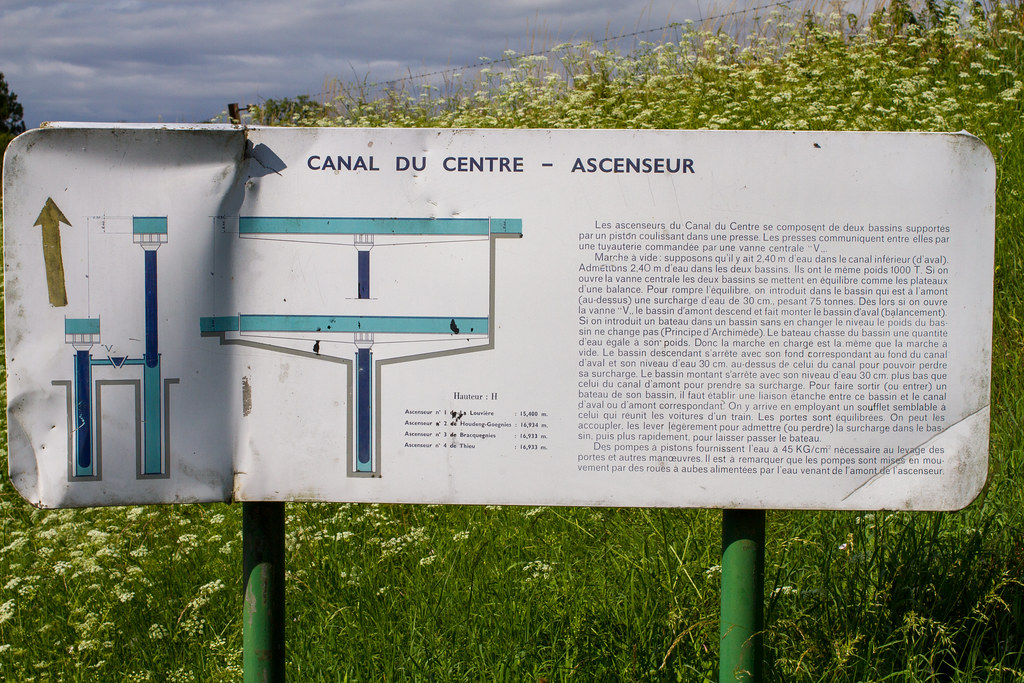 I had seen many lock-type canals in the past, but this was the first time in my life that I witnessed a system that eliminates the difference in water level by lifting the entire ship with such a large-scale machine, and I was very impressed.

History of the canal

Let’s talk a little more about the history of this canal. La Louvière, the Canal du Centre, first appeared in 1882. The development of the coal and iron ore industry in the region led to the need for a large canal, so it was planned. However, it was 1917 before the canal was actually filled with water and finally put into operation by the German army in the middle of the First World War. So we visited in 2017, which means it was exactly the 100th anniversary.

However, the difference in elevation between La Louvière and the neighboring town of Mons was so great that the director of H.Genard, who was contracted to build the sluice at the time, argued that in order to block the water and allow ships to pass through, not a lock but a huge elevator to raise and lower each ship was necessary, and the boatcraft type was introduced.

The four canal elevators built in this way were used in sequence to overcome a height difference of 66.20m over the 6.97km length of the canal. 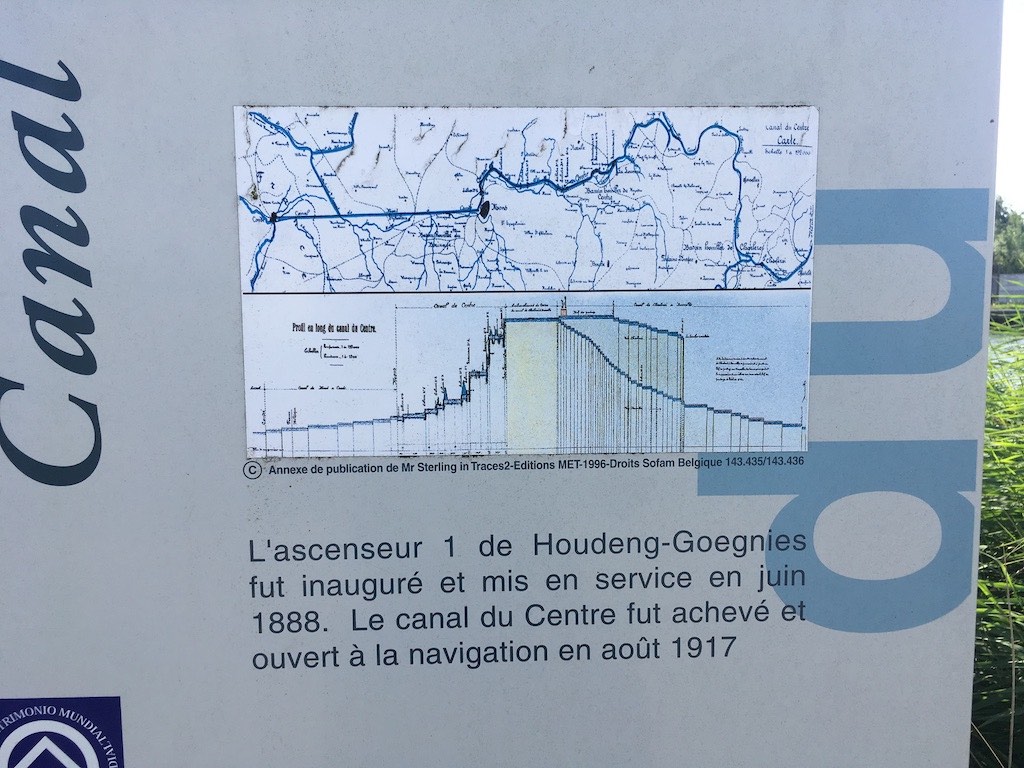 The third canal elevator is good as the center of tourism

Here is the map that I got from the tourist information facility that I found on the way from the first elevator to the second elevator. 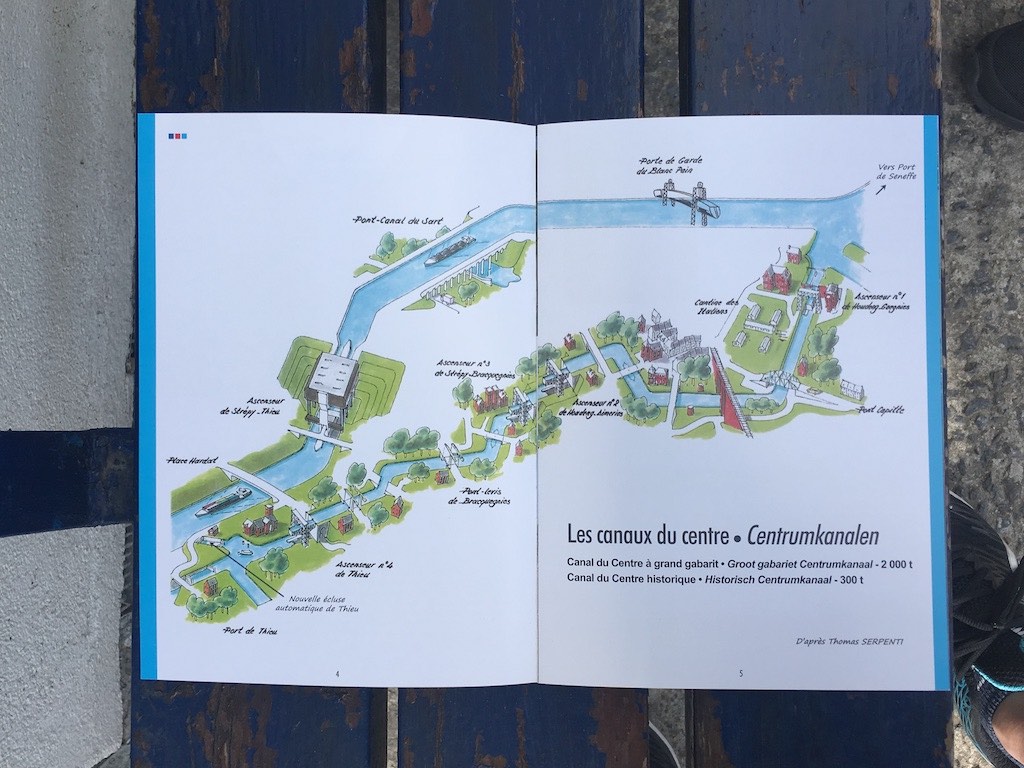 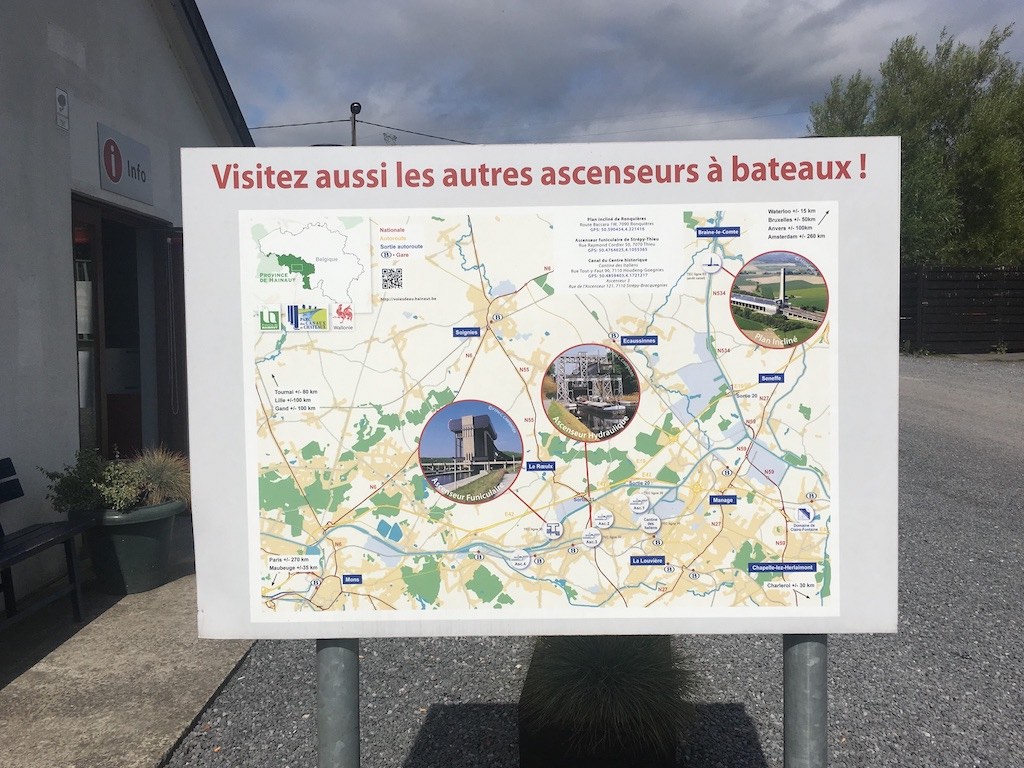 We first saw the first elevator “Ascenseur N°1 de Houdeng-Goegnies” and there were no tourists except us, but it seems that the center of the tour is the third elevator “Ascenseur N°3 de Strépy-Bracquegnies” and the modern version of the Canal du Centre elevator “Strépy-Thieu elevator” which I will explain later. Near the third elevator, there was a museum related to this canal. (We couldn’t stop by because of the time. It’s always like this…) 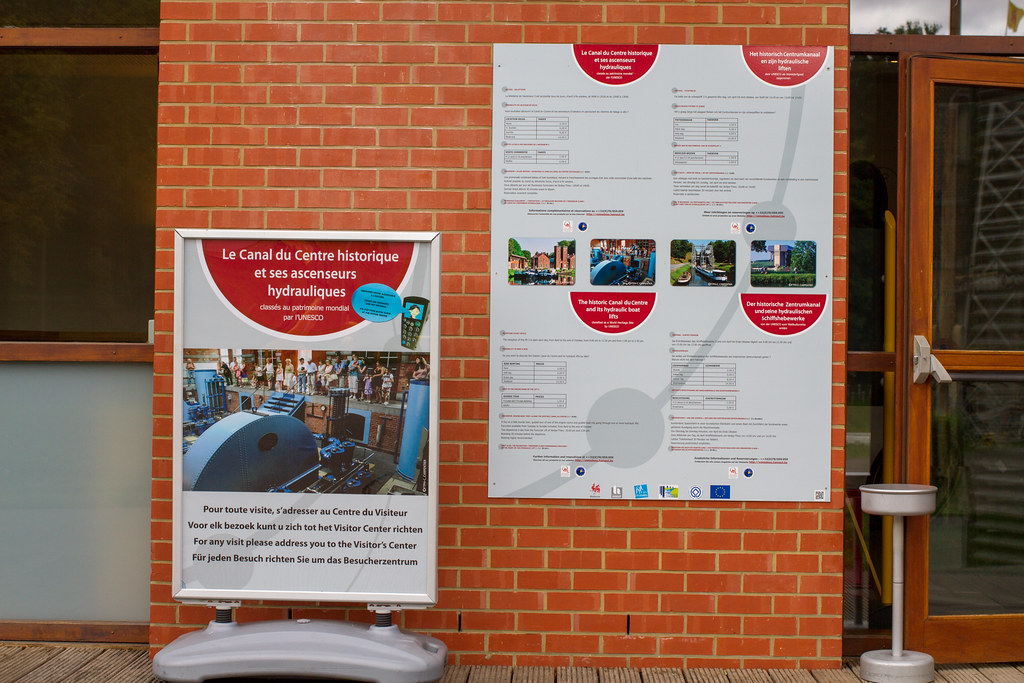 We parked our car in the parking lot near the “Ascenseur N°3 de Strépy-Bracquegnies” (only a few cars can park there, but it’s free) and watched this canal elevator, still fully operational, in action. 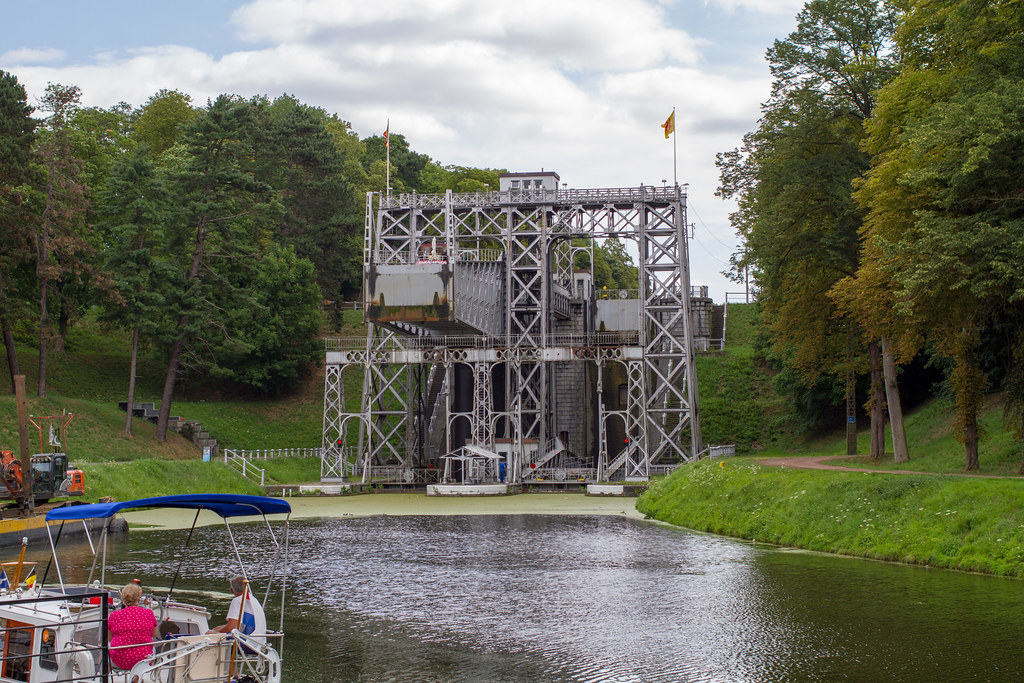 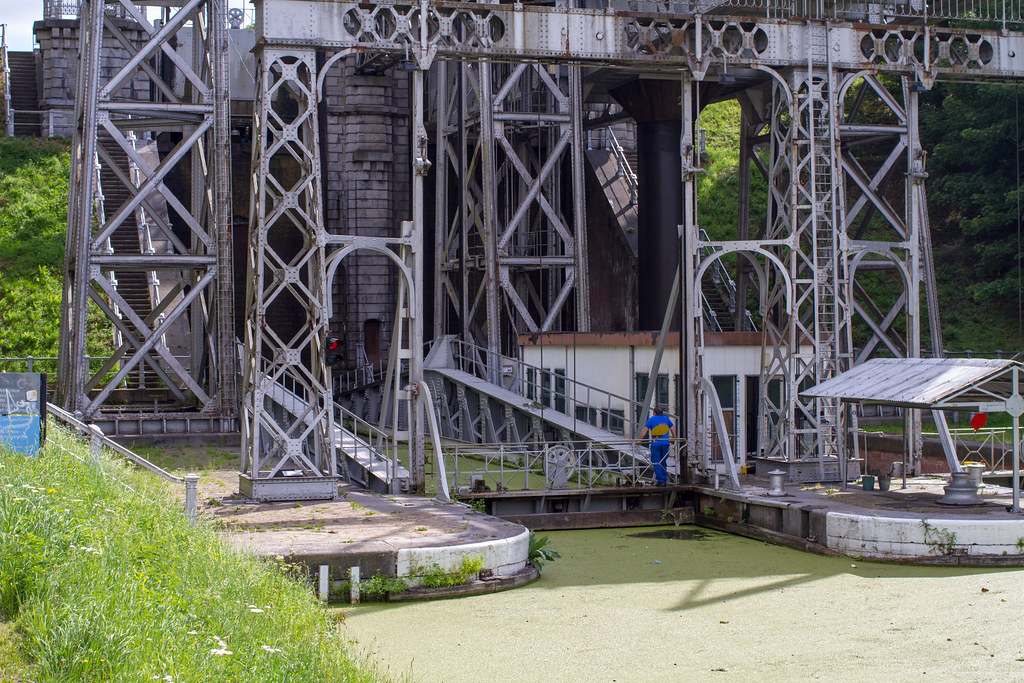 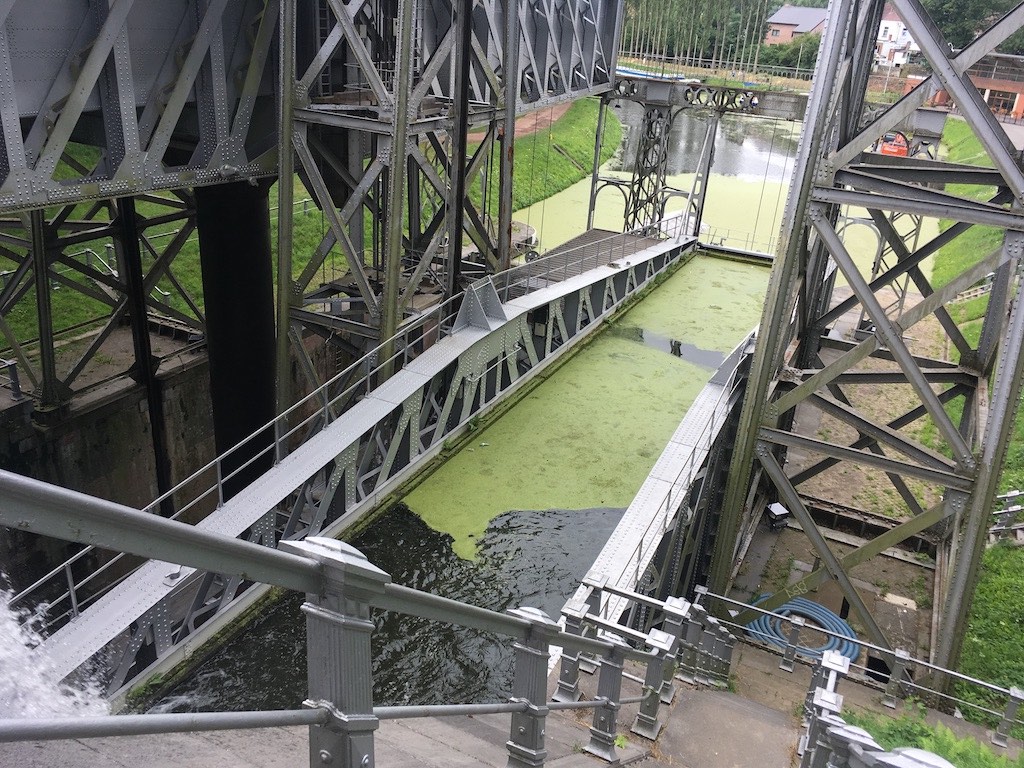 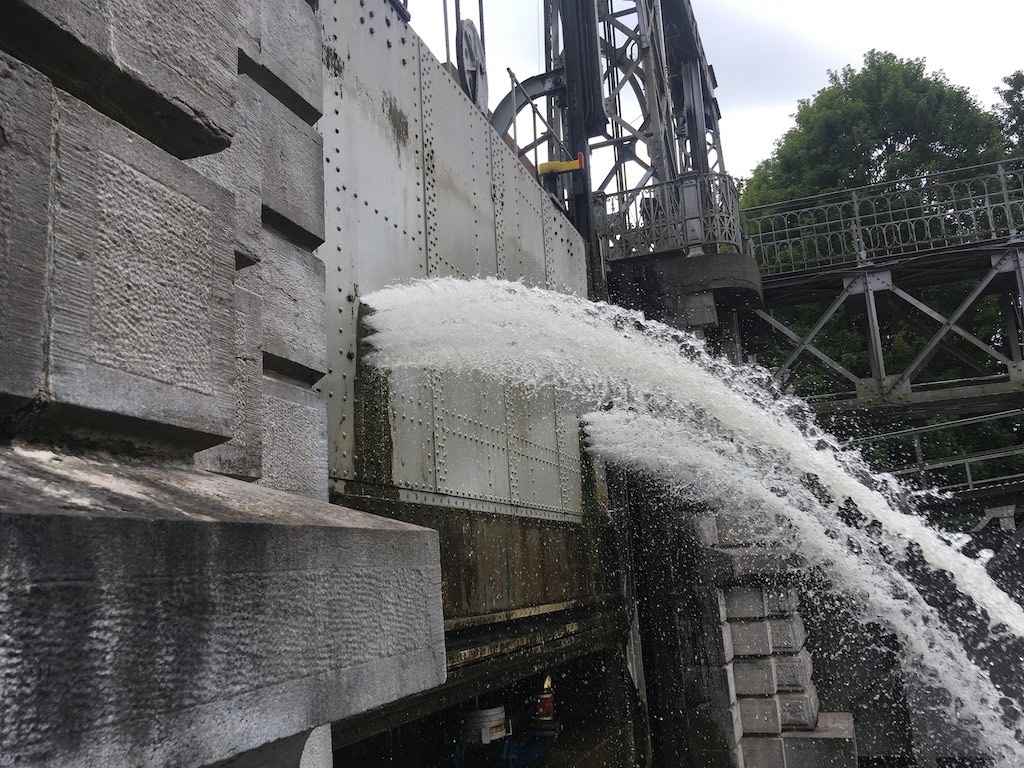 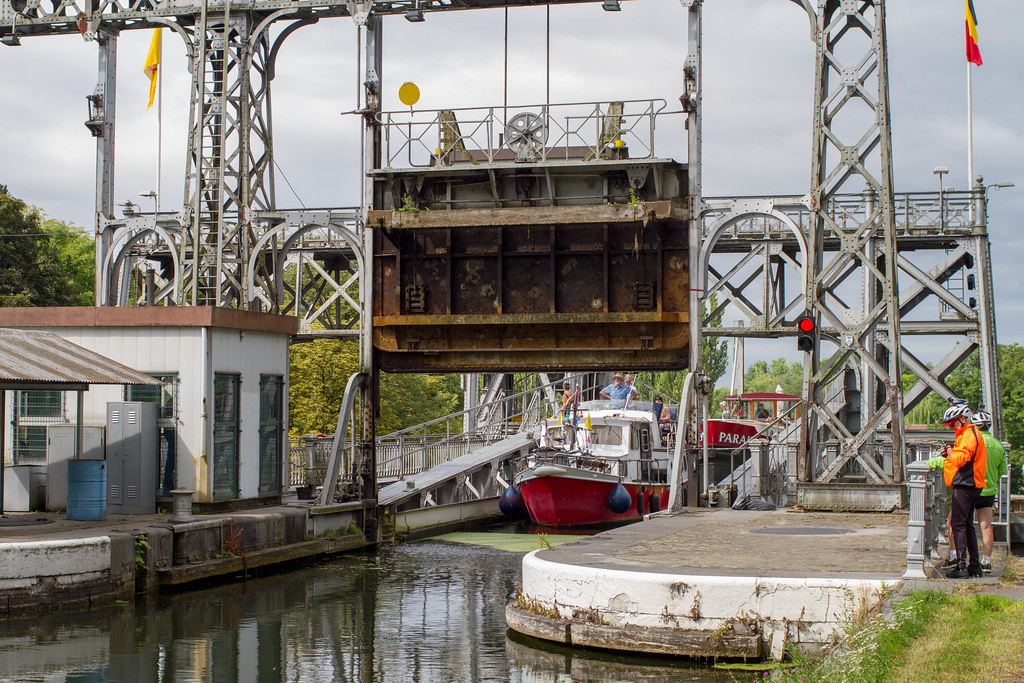 This is the ship that was using the elevator earlier. I wonder if it is privately owned. It’s pretty laid back, but looks fun! 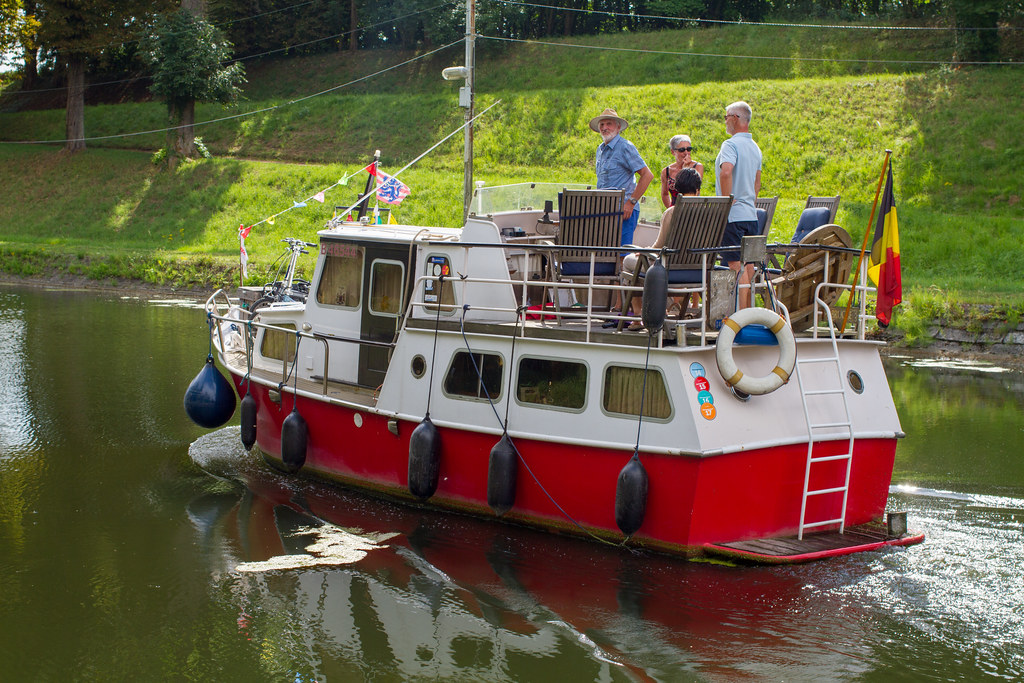 The canal was a great place for a walk. I saw many people walking, riding bicycles, jogging and so on. However, there is a step near the elevator, so you need to take the stairs if you are on foot. 15 to 20 meters long stairs are quite high, so it was a good exercise. 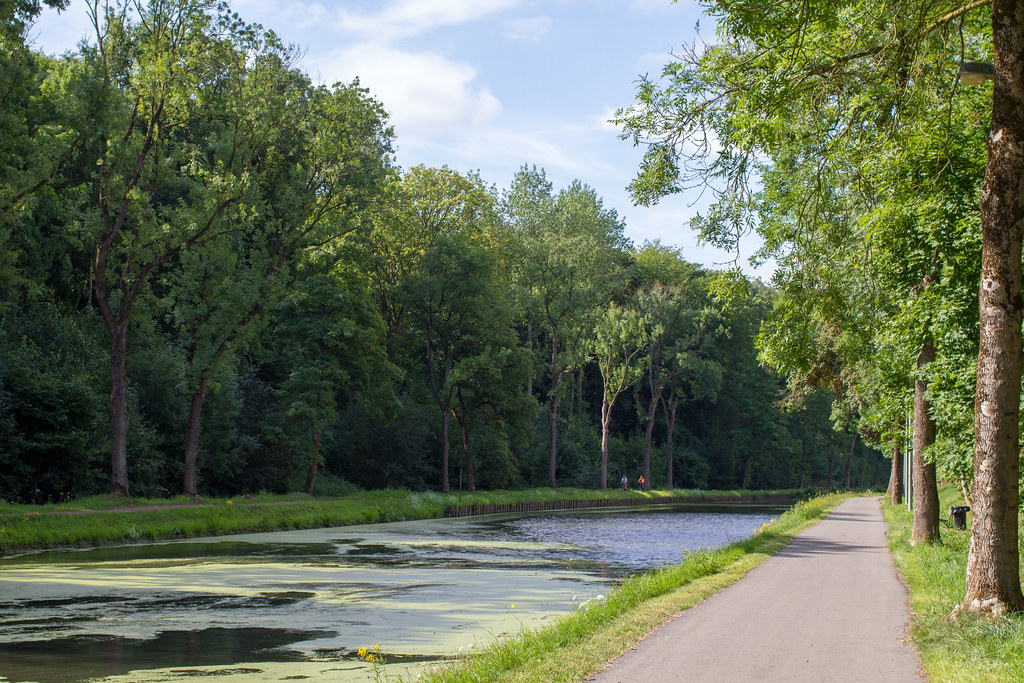 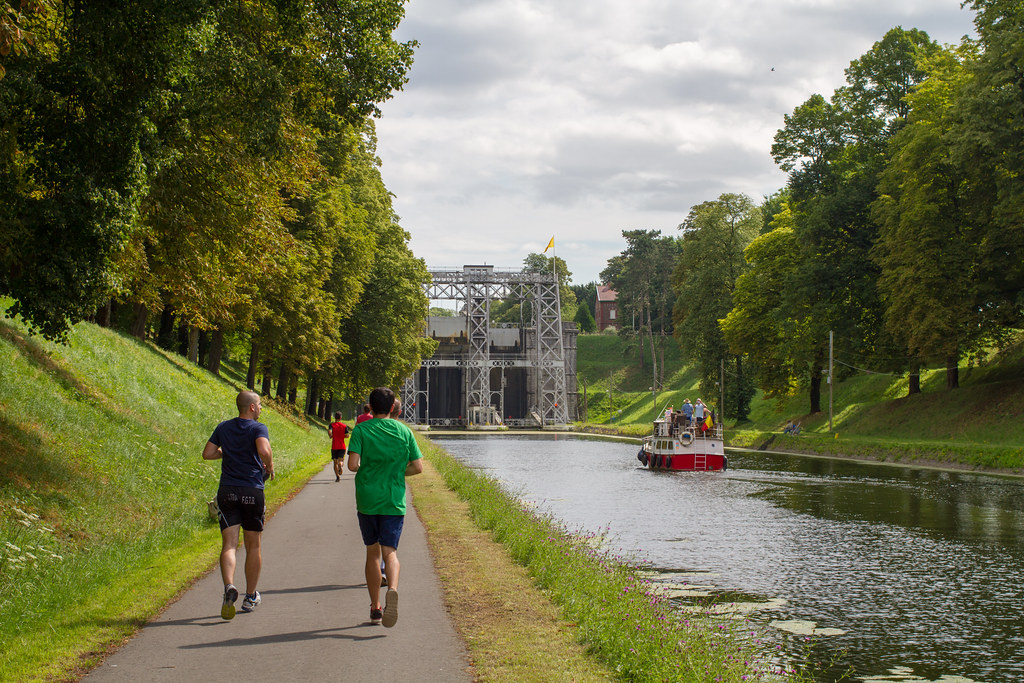 Funny about the manual bridge!

By the way, I’d like to tell you a story which is not directly related to the canal elevators. When I finished admiring three canal elevators at once and tried to return to the parking lot, it was just before a sightseeing boat passed the bridge which I crossed with my car just now. However, there is not enough height in the bridge, so it seems that you can not pass underneath. 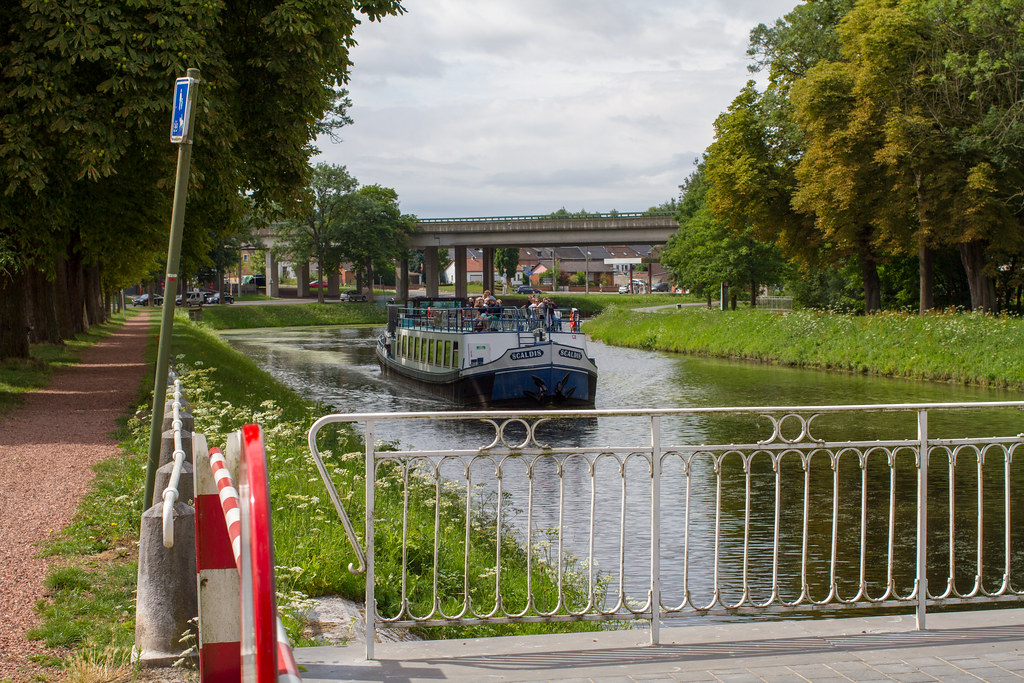 But then two men came out of nowhere, and one of them started to lower the circuit breaker manually. I thought, “How can this be analog when there is an excellent mechanized canal elevator right in front of me, even though it is 100 years old? I thought. 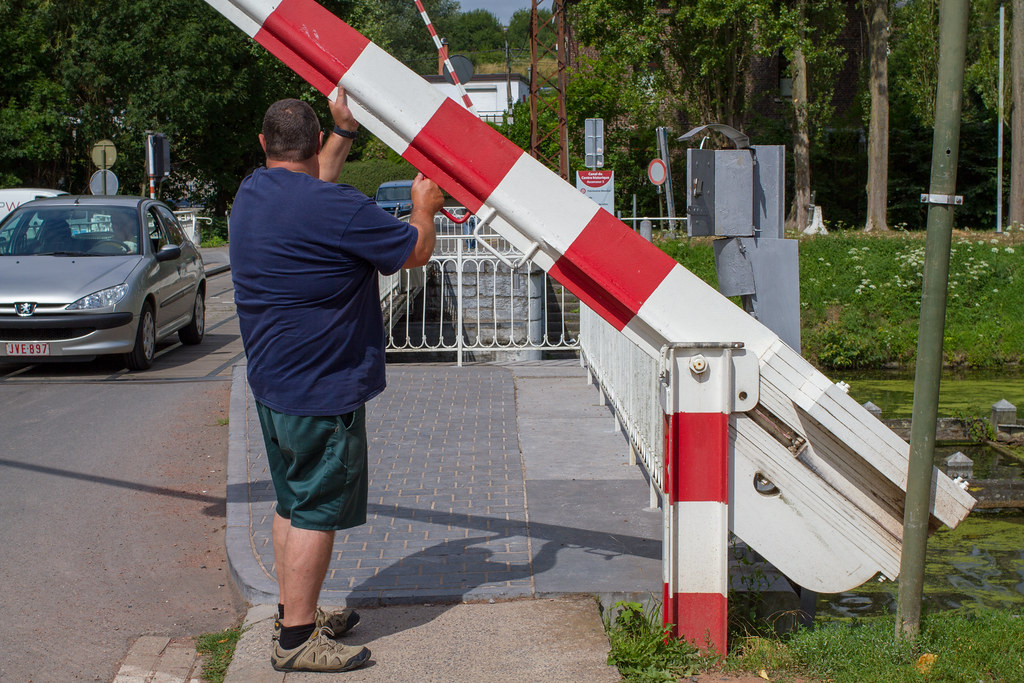 However, the bridge was designed to allow ships to pass by rotating the bridge, but the bridge was also rotated manually by another person spinning a crank in the middle of the bridge! I was surprised that it was done manually so far. It’s a rare sight to see. But even such a big bridge can be turned by one person. 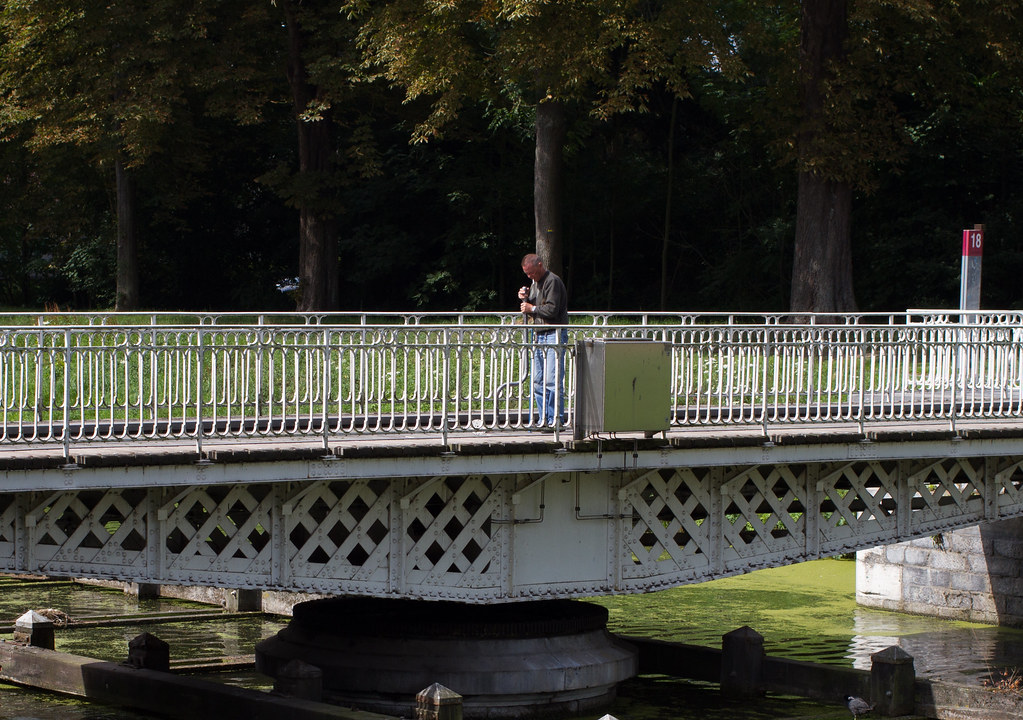 Then the bridge was safely parallel to the river and the boat could pass. The uncles were looking at the boat with a look of “I did a job! 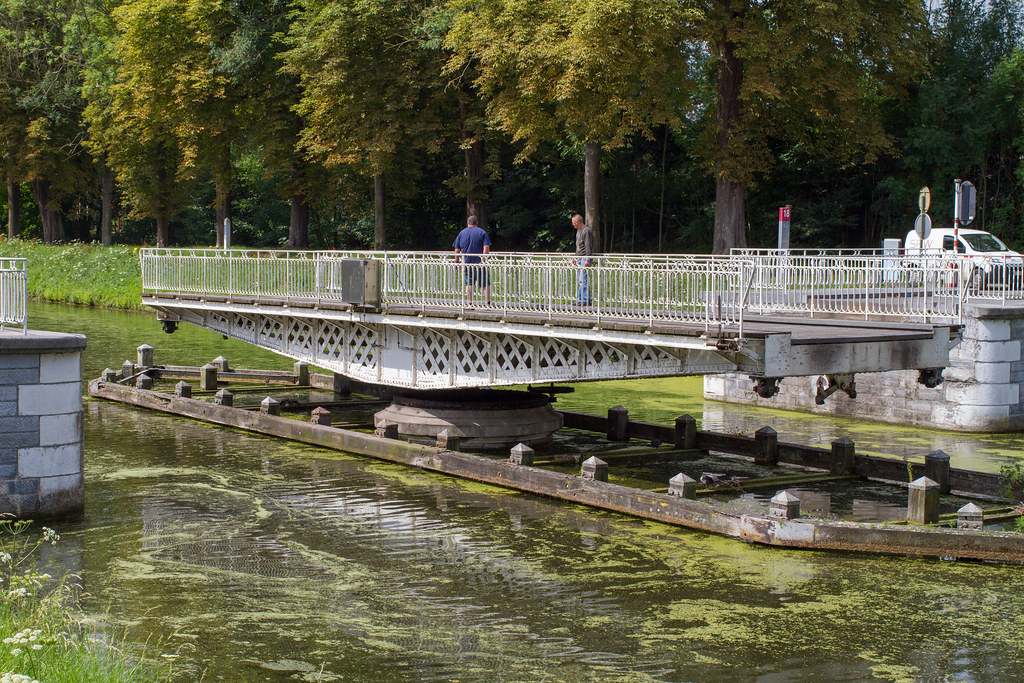 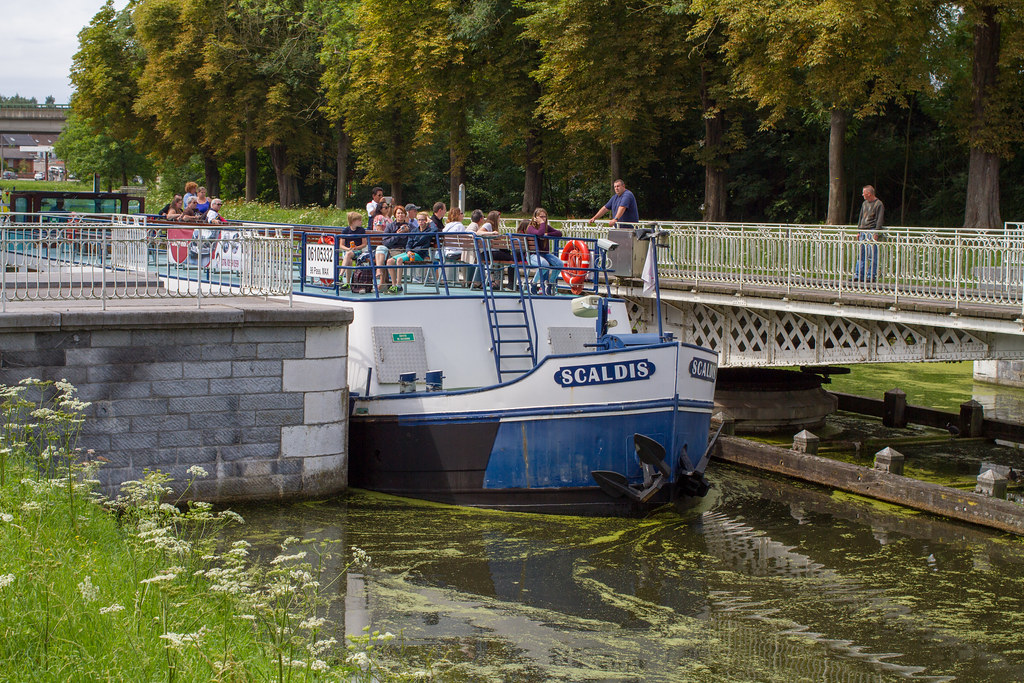 Then, after the ship had passed, the bridge was manually restored to its original state again. 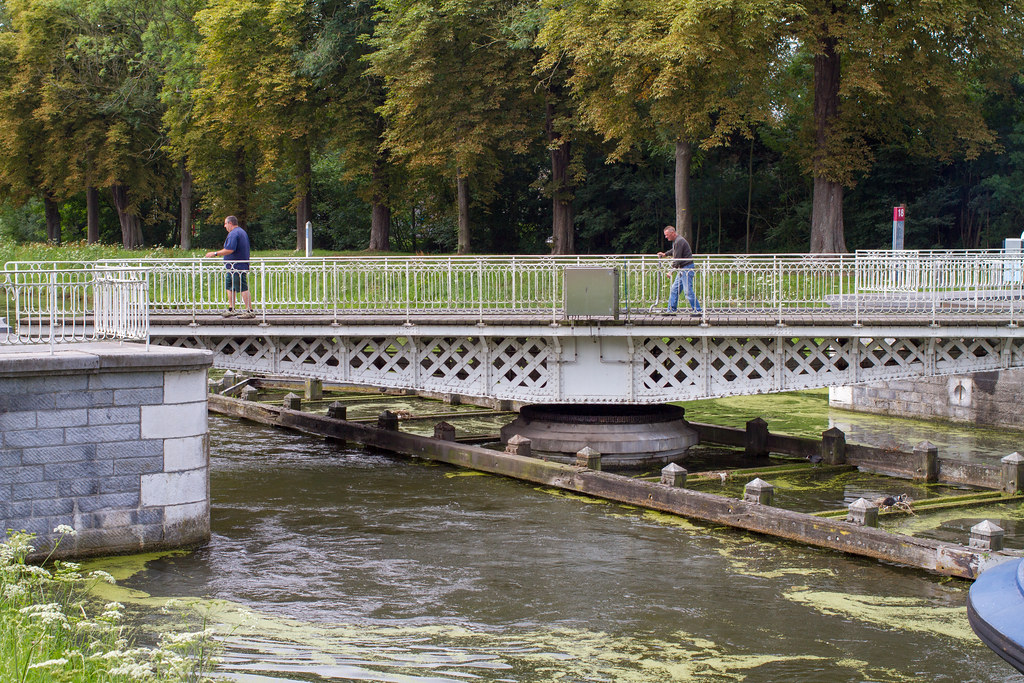 The canal currently in use, the elevation of this area at a glance!

Finally. The Canal du Centre, which is still in this area today, is actually still in operation. However, the area where the four elevators are located, which is a World Heritage Site, is currently not used for industrial purposes but for tourism. The elevators actually in use are the Strépy-Thieu elevators, which are located about 1 km away from the four canal elevators. 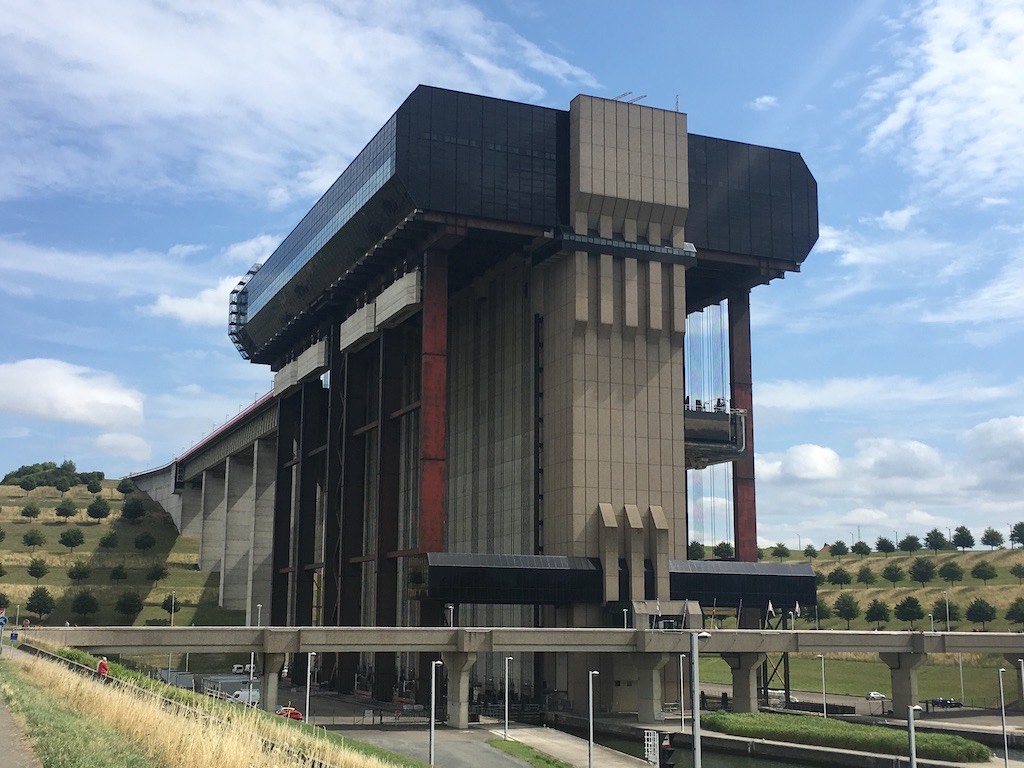 But actually, this canal was built in 2002, so I was surprised that it happened more recently than I had expected.

The inside of this elevator is a museum, and you can have a meal in it. However, we didn’t have time to see the inside of the Strépy-Thieu Elevator because we had to go back to Lille, France to return the car and take TGV to Charles de Gaulle Airport to go back home.

There is a boat tour that takes you to all the canal elevators.

In fact, there is a tour that takes you on a boat ride to experience the four elevators and the modern and huge Strépy-Thieu elevator, which is a World Heritage Site. It’s a 2.5 hour tour and costs €15 for an adult. The price is 15 euros for adults, which is quite reasonable.

The departure point is from Strépy-Thieu elevator, so you should be able to register inside. You’ll have to contact them directly to find out if you can book in advance, but as it’s a local tourist attraction, you can probably just go on the day. They are closed on Mondays and open from April 1 to the last Sunday in October.

Château de Chambord Apr 2006The main purpose of this tour is to visit "the most beautiful villages in France" as last ye...

Date: September 24, 2015「Google Timelineによる軌跡」I'm back from my trip to Germany, so I'll resume updating here. There are ...

Local time: May 9, 2014The last day was sunny and today was the last and first short drive of the trip.Because we had al...
Le bois du Cazier World Heritage Site from the Major Mining Sites of the Walloon Region
World Heritage: Notre Dame Cathedral (Tournai)
Home
2017 Wallonia Tour
Copied title and URL