A landmark that just became a World Heritage Site during the trip.

I was in Dijon on the 21st, the morning of the day I had a schedule to keep. It used to be the capital of the Duchy of Burgundy. The day before, I had driven through the Côte de Beaune, as I mentioned in my post just before. To be honest, there were not many places to visit in Burgundy, even though it is a gourmet’s paradise, and I had already visited the saltworks in Arcesnans and beautiful villages many years ago, so I had nothing to do. I had nothing to do.

That is the Longchamp “Notre-Dame-du-Haut Chapel”.

The place where we are going to stay on the 21st is called Arbois (where there was a Michelin 2-star auberge), which is in the Jura department of the same Franche-Comté region. I found out that there is a famous chapel designed by Le Corbusier in Longchamp in the same region.

However, while the town of Arbois is located almost at the western end of the Franche-Comté region, Longchamp is on the opposite side, almost at the eastern end, further north-east of Besançon. It is very close to its eastern neighbour, the Alsace region. Germany and Switzerland are also well within an hour or so.

Even though it takes about two hours from Dijon by car, it is not very efficient to go back to Arbois by the same road again. So I was hesitant to go there at first, but I decided to go there because it would be a waste of time.

In particular, the “horizontal and horizontal windows” and the “domino system”, which is a structural system consisting of only reinforced concrete floors, pillars and stairs standardized for mass production, although not included in the five principles, have something in common with the concept of the Bauhaus, which was founded by Gropius.

By the way, speaking of the world heritage of modern architecture, I visited “Le Havre” in July, which is a planned city reconstructed by Auguste Perret. In fact, Le Corbusier was his disciple. It seems that before Auguste Perret, there were no buildings made of reinforced concrete. I was able to realize once again that people like Perret and Corbusier pioneered the idea of architecture that we now take for granted. The activities of the Bauhaus are just like that, aren’t they?

In addition, here is a very good feature. I found it very helpful in writing this post.

If you are a fan of Le Corbusier, you should definitely have this book. By the way, it’s also available on Kindle. I bought the Kindle version.

Now, let’s get back to the story. Sorry for the long preamble, as usual. We left Dijon a little after 9am and flew along the highway to Longchamp, then took the open road to our destination. The way after getting off the highway was surprisingly long. After all, it took one hour on the expressway and less than one hour on the ordinary road, I guess. However, there was no traffic jam, so we were able to go almost non-stop.

After arriving at the town of Longchamp, we took a narrow side road from the prefectural road and found the chapel on a hill about one minute up the hill. There was a big enough parking lot (free of course), so we parked there. 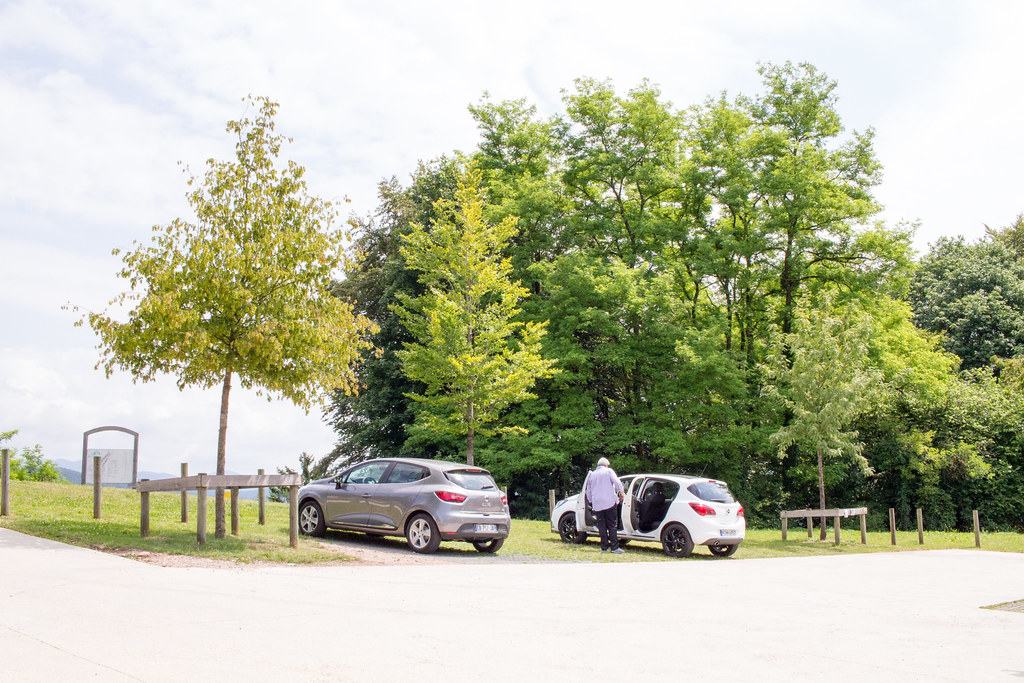 There were probably about 5 other cars. Unfortunately, the shady/shaded places were filled, so we had to be in direct sunlight to the fullest. It was raining when we left, but the sky cleared up just before we arrived.

And this is the entrance to the facility. You can buy a ticket here and go inside. It seems that Le Corbusier did not design it, but I feel that the design has enough elements of modern architecture. 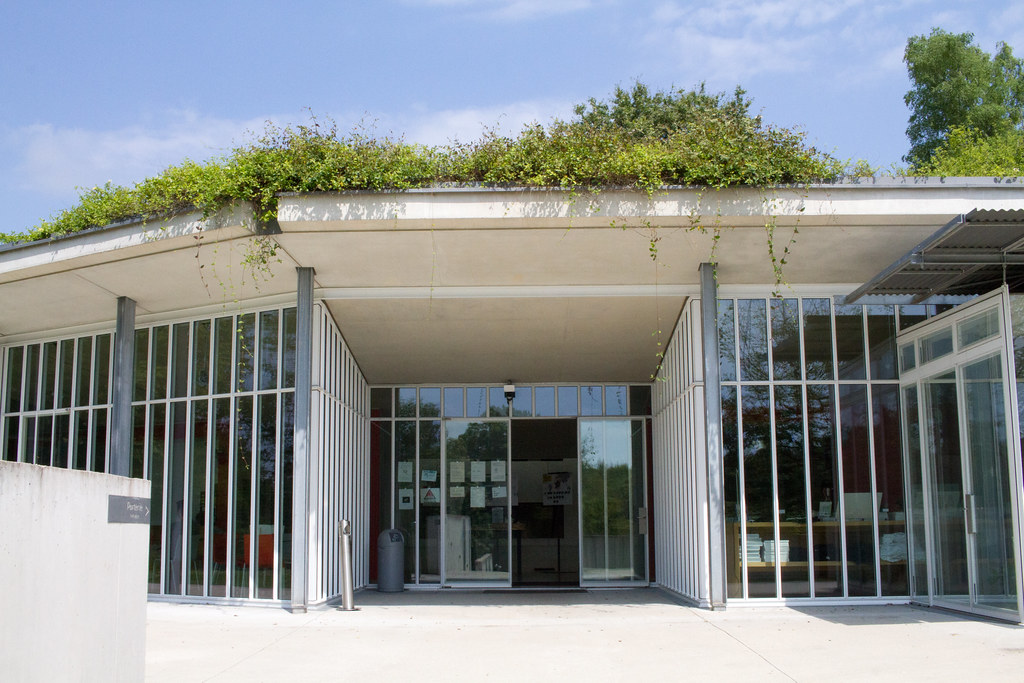 Get a brochure at the entrance and start sightseeing. You can get a copy of the brochure in French and English.

The chapel of Longchamp, view from outside

Go through the entrance building to the hill, on the highest point of the hill is the Longchamp chapel. 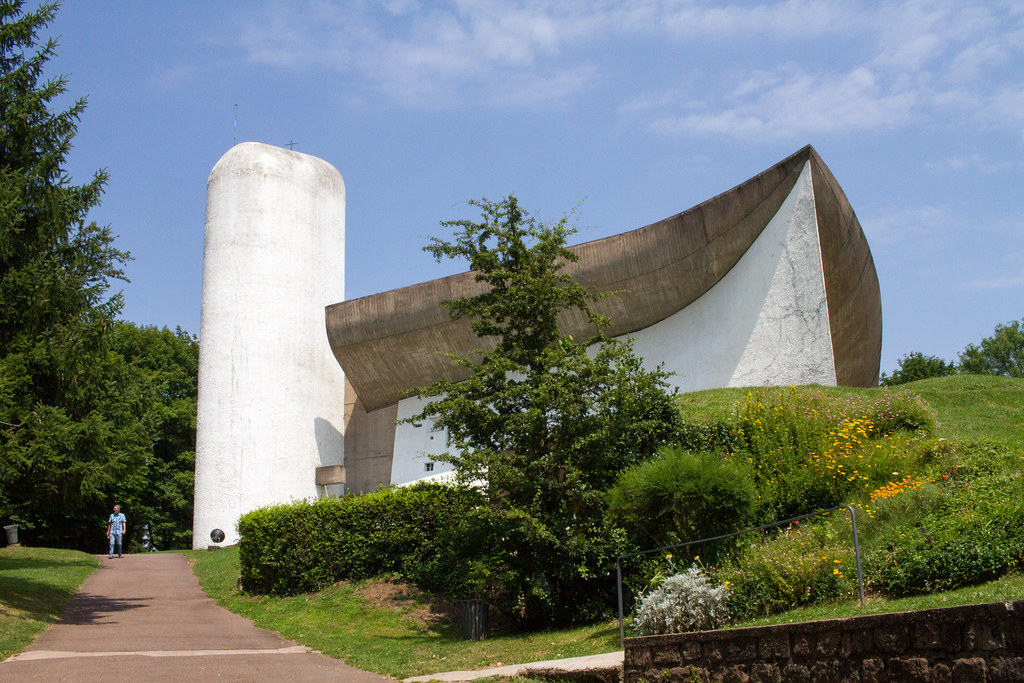 This chapel in Ronchamp is officially called “Chappelle Notre-Dame du Haut, Ronchamp”. It is a late work of Le Corbusier. The chapel was destroyed by the bombing in the Second World War, but Le Corbusier rebuilt it after the war. It is located at number 4 on the map in the brochure above. It was a good place to take a picture next to the building No.2 on the map above. 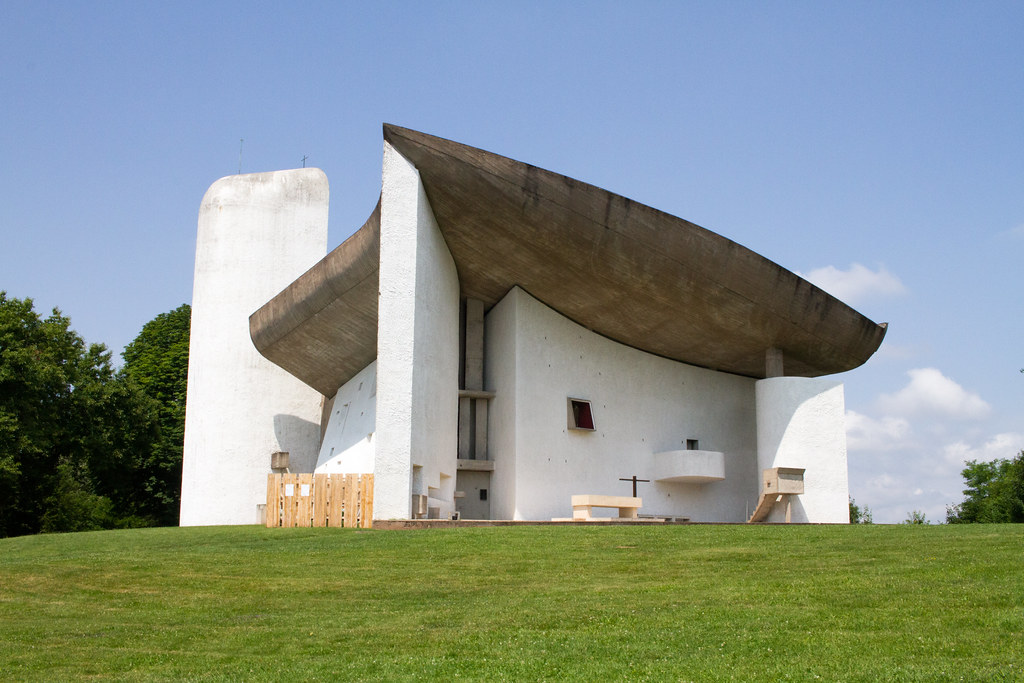 It is interesting that the impression of this chapel changes depending on the angle of view. 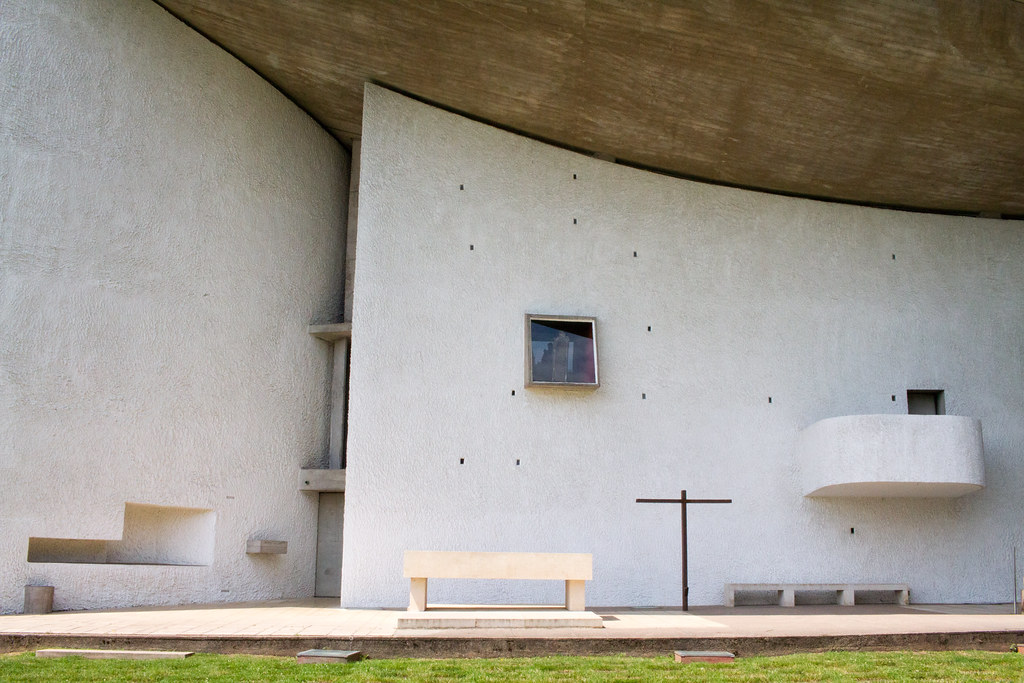 However, when I compare this chapel with the “five principles of modern architecture” that I just learned, even I, a layman, can see that there are no “pilotis” and “horizontal windows (la fenêtre en bandeau)”. But perhaps this is what makes it so attractive.

Interior view of the chapel at Longchamp

Next, I’ll show you the inside of the building. The central chapel was an image that was more spacious than I thought. 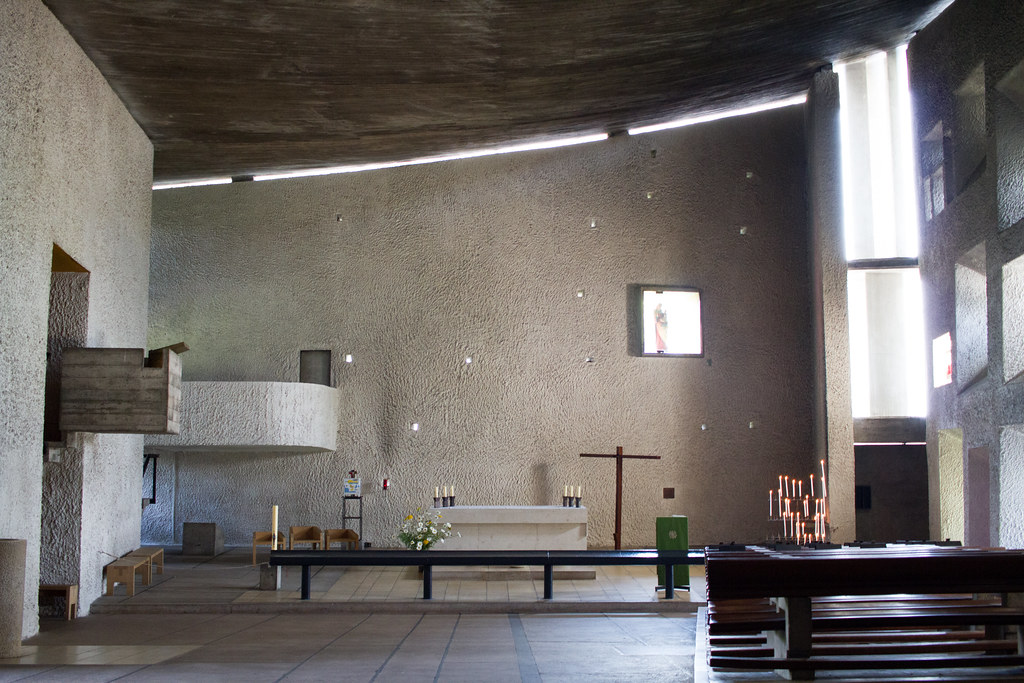 The interior seating is smaller and more comfortable than in traditional churches, chapels and cathedrals. 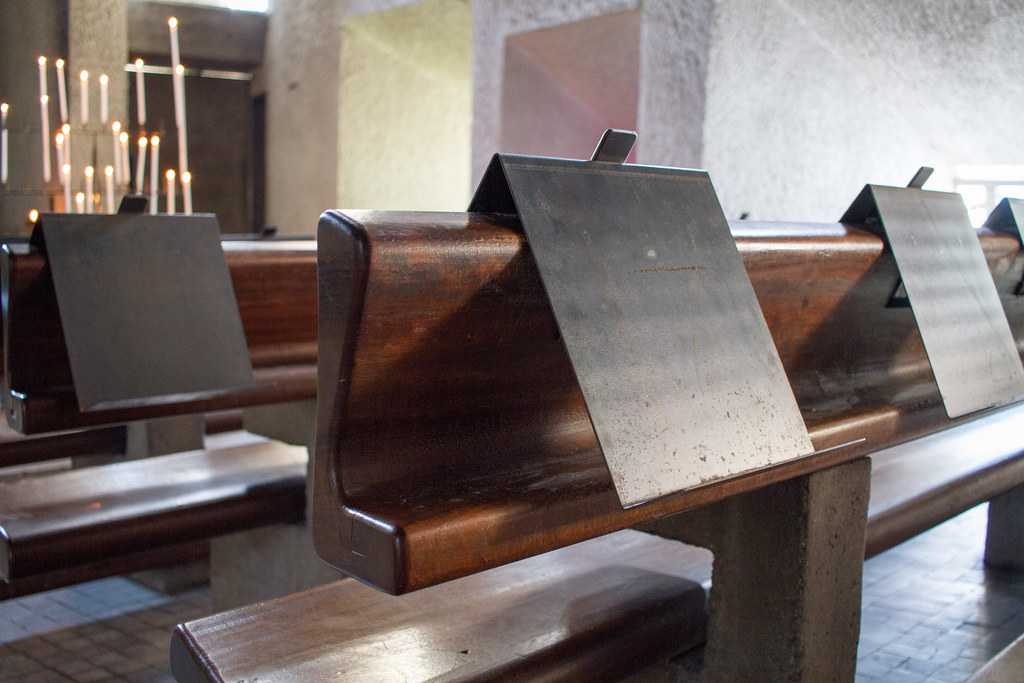 A clean altar. However, I feel that white main altar is often seen. 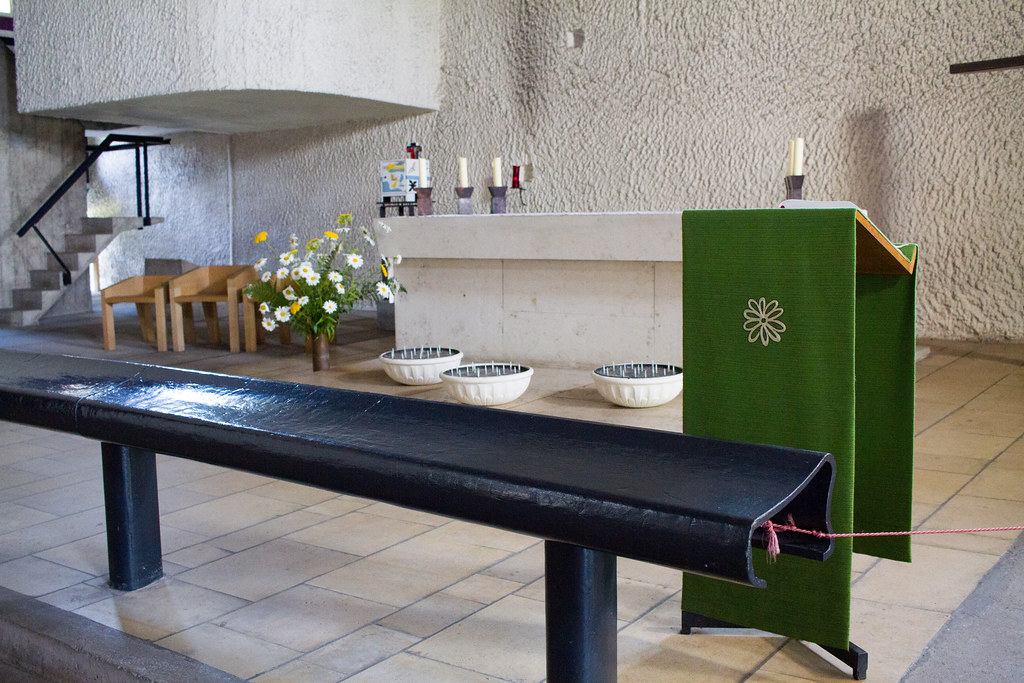 The small chapel is a very beautiful contrast to the light pouring in through the skylight. 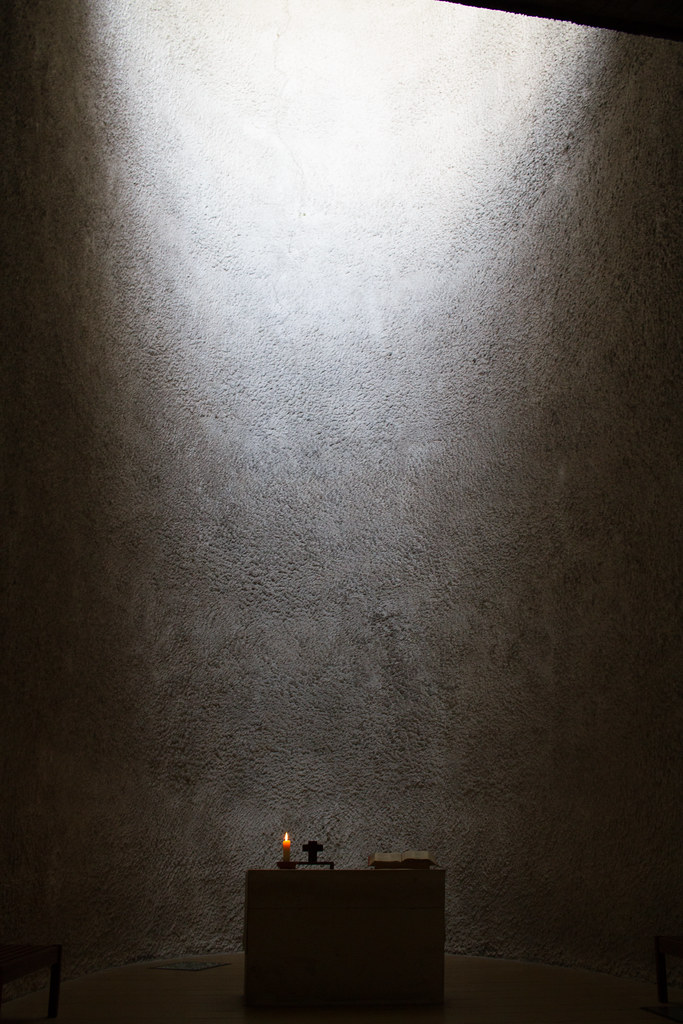 This is the door with Le Corbusier’s picture on it, and it is revolving. It is usually closed. 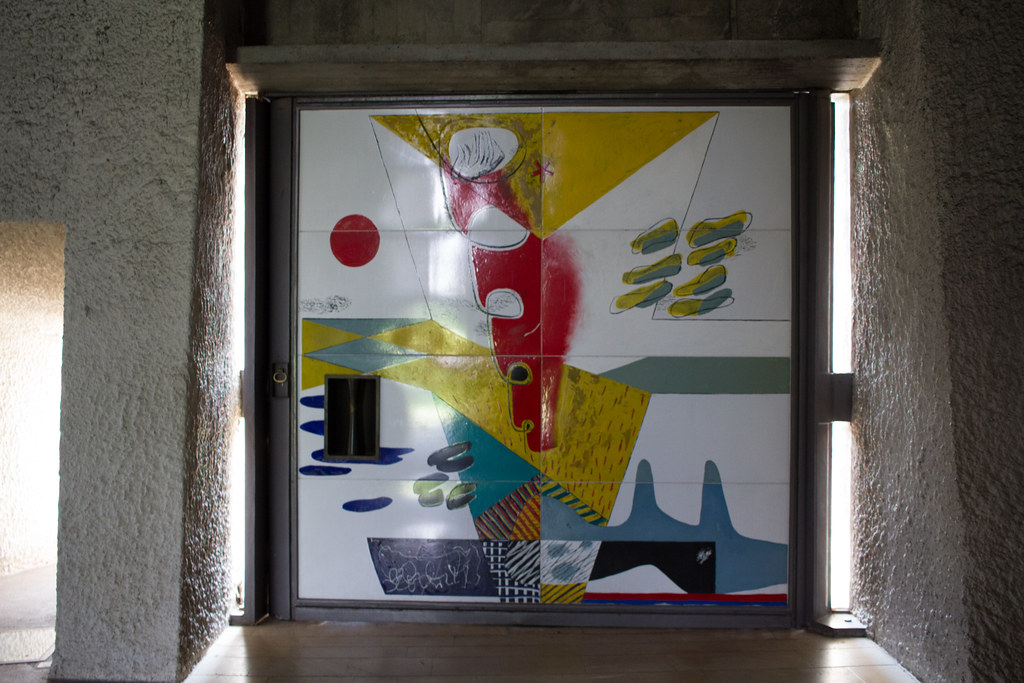 There are several other buildings in the complex where this church is located. 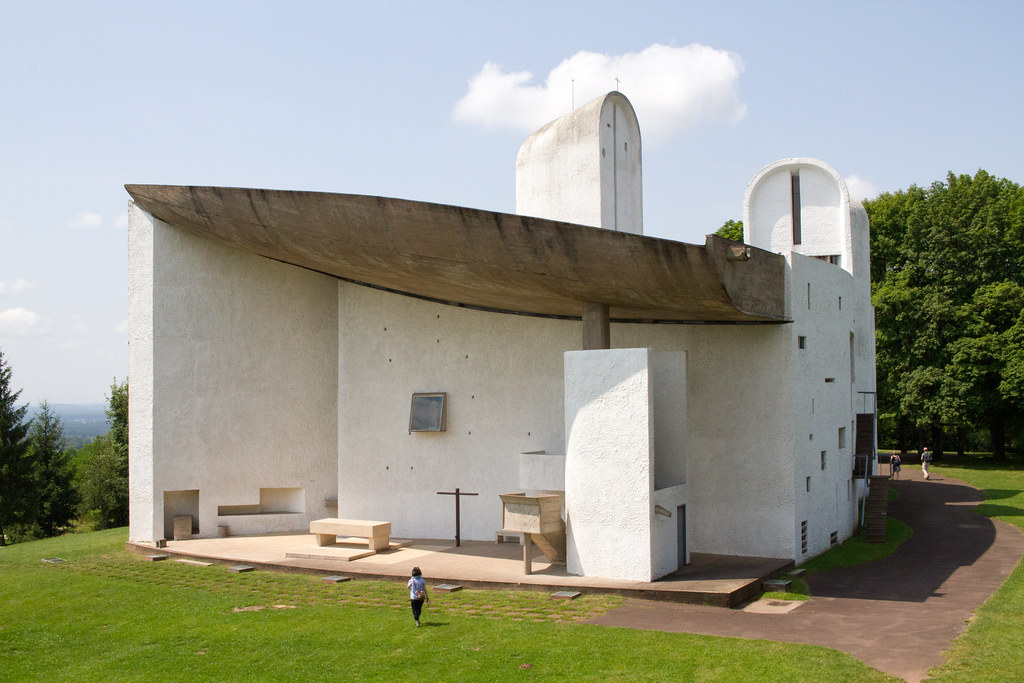 The above photo was taken from the top of Pyramide de la paix (No.5 on the map in the pamphlet). We could climb the Pyramid of Peace as usual. 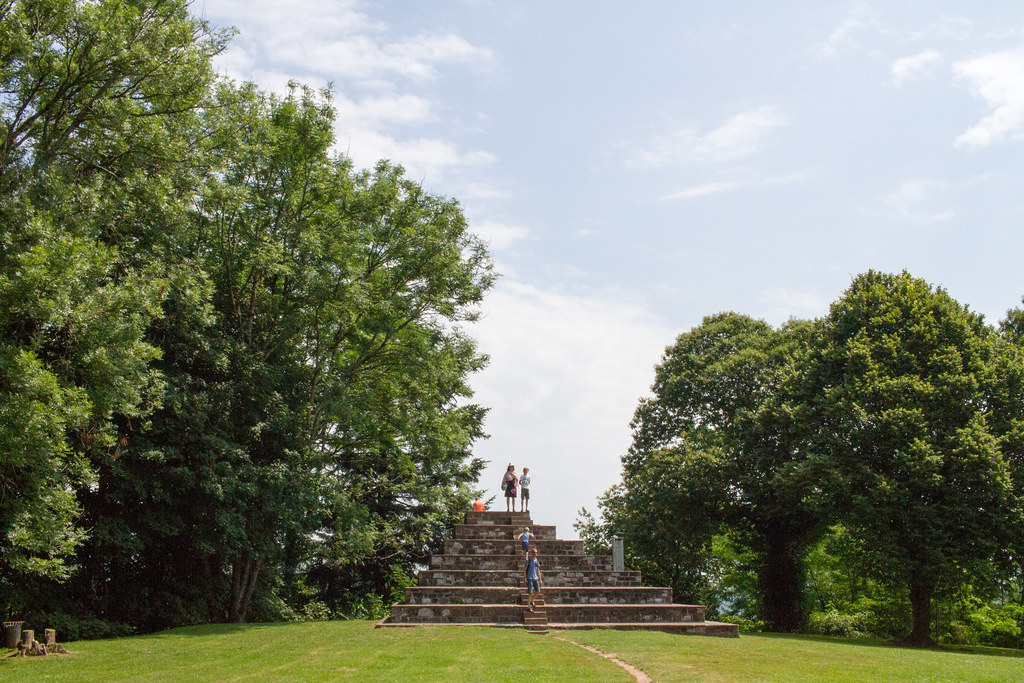 The bell (Campanile) in the next photo was built in 1975, and it is the work of Jean Prouvé, not Le Corbusier. 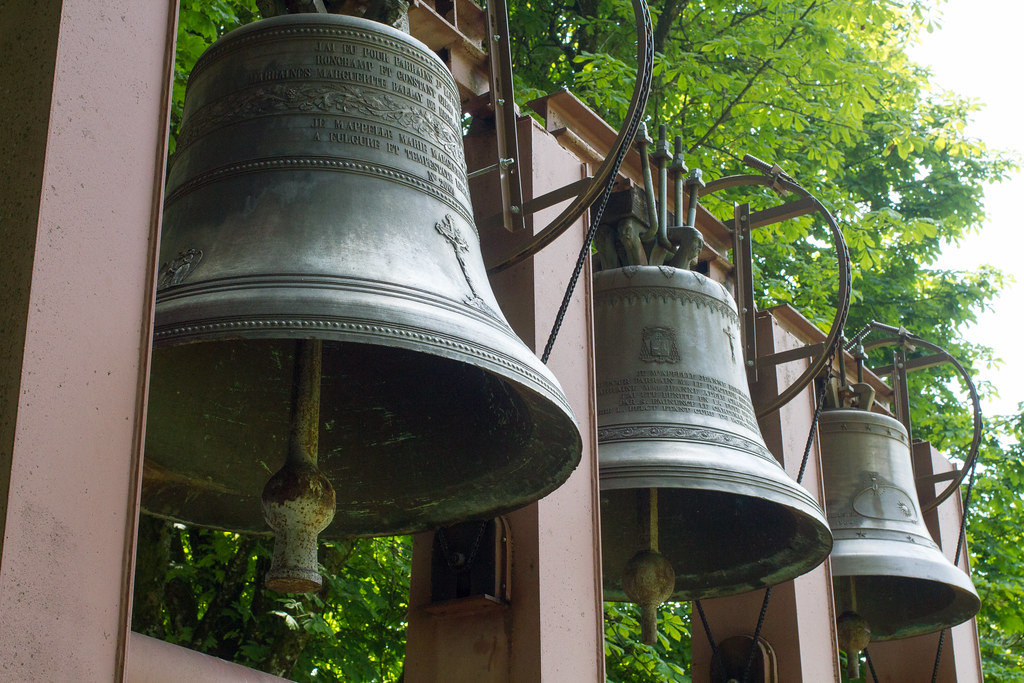 And the last one is Map No. 8, the Chapel for the Sisters, which is open to all, the leaflet said. 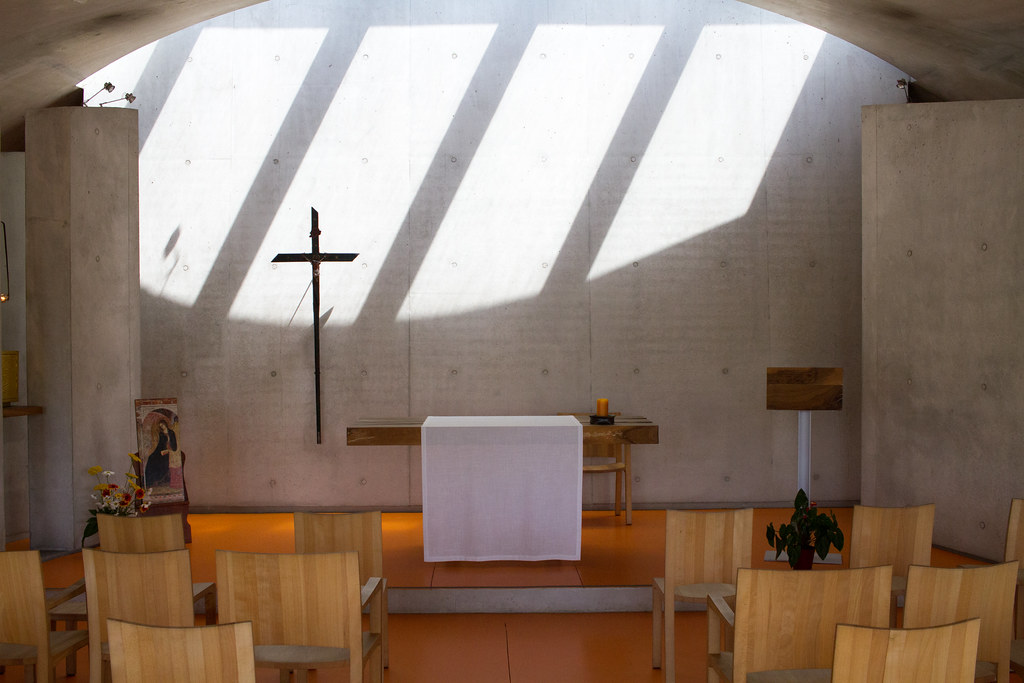 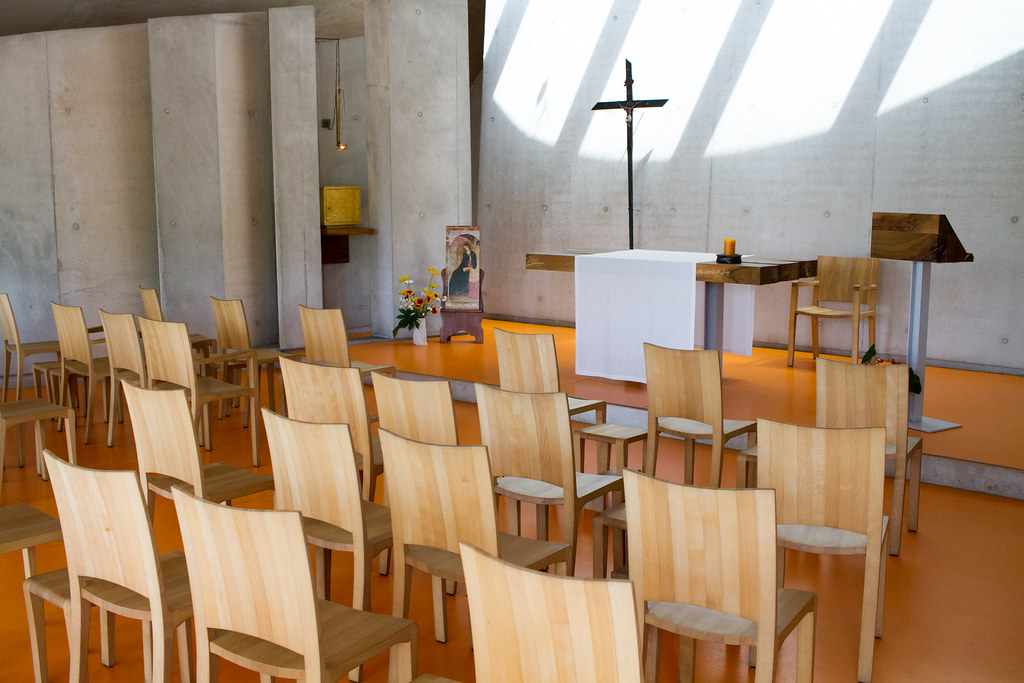 This one was also built relatively recently, in 2011, so it’s not by Le Corbusier. The chapel was built by Le Corbusier, and after his death, another talented architect added buildings to the complex.

This completes the viewing. I think it was a little over an hour even if I saw it slowly.

Various exhibits at the entrance

By the way, the exhibition inside the building at the entrance was also very interesting. First of all, there is a model of the entire facility as soon as you enter, and there are explanatory panels surrounding it. 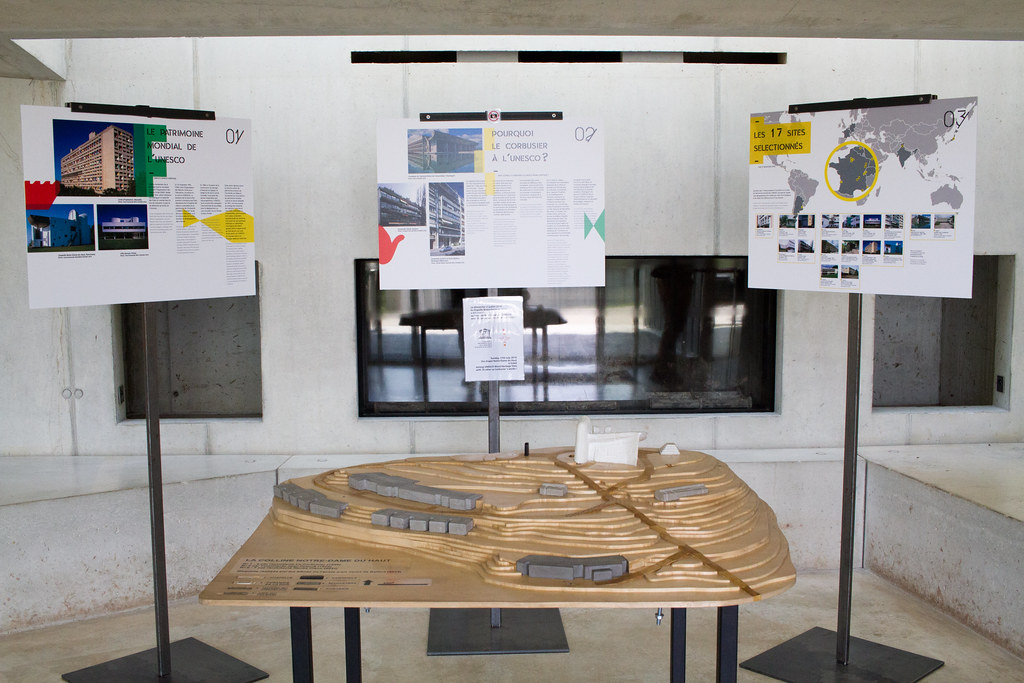 On each panel, there was a map showing the locations of the 17 buildings inscribed on the World Heritage List, and an explanation of why they were chosen as World Heritage sites.

In another corner, there was a list of buildings designed and realized by Le Corbusier.

Incidentally, there is also an architecture designed by Le Corbusier in Japan. It is the National Museum of Western Art in Ueno.

However, although Le Corbusier was involved in the design of this building, his Japanese apprentice took the lead in the actual construction, and Le Corbusier himself seems to have visited the building only once. Even so, I think it is an architecture that you can feel the concept of Le Corbusier enough.

However, until Le Corbusier’s architecture was registered as a World Heritage Site, I only thought it was an interesting building. Of course, it is important to feel as your intuition tells you without any preconceptions, but still, I thought that knowledge is important in art appreciation.

I haven’t been to Ueno for a long time, so I’d like to make an opportunity to visit there.