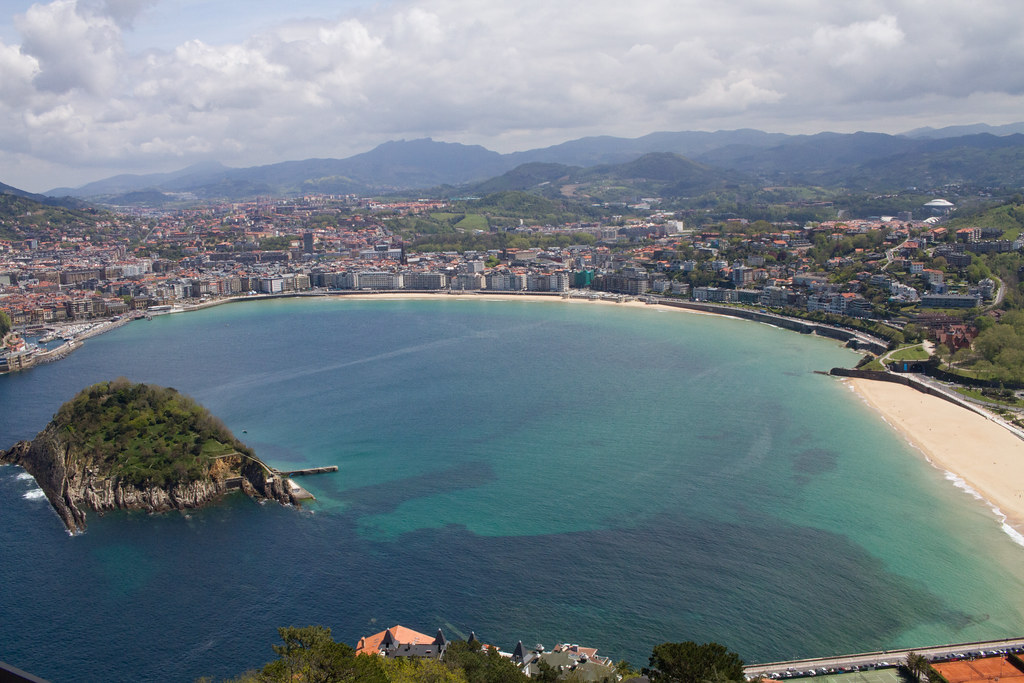 The most bustling city in the Basque Country, Spain

It took about 40 minutes to get to this city from Saint-Jean-de-Luz, Sibourg in French Basque Country by highway. We got stuck in a bit of a traffic jam because of the construction work near the border, but if it hadn’t been for that, we would have gotten there a bit faster.

In fact, there are not many hotels in the old town of San Sebastian, so it was difficult to make a reservation here. I booked the hotel in advance.

Because of this, we couldn’t adjust our itinerary properly before and after San Sebastián. Thanks to this, we had to go right and left in the Basque Country for nothing. Well, all we had to do was to fly the car…

Nevertheless, if I had not taken a hotel in the old town forcibly, I might have been able to get a reservation a little easier and flexible schedule. However, since it is the first time to visit the city, I don’t have a sense of geography, I can’t consider how far I can walk on foot, and it is difficult to judge only by Google Maps.

The hotel is a pension (apartment) in the old town convenient for sightseeing. In addition, I also checked AIrbnb, but in the end Booking.com was more reasonable than the number of registered hotels, so I booked via here. 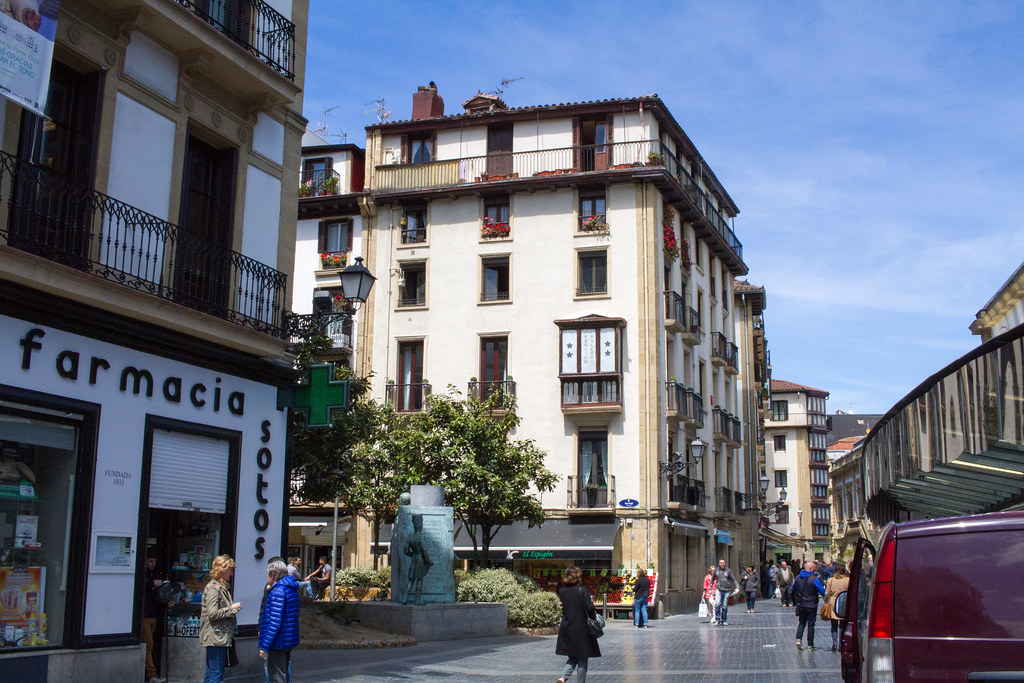 The location was excellent, close to the underground car park in town and an outstanding choice.

Well, it was a little difficult to find the entrance of this pension. This is because pensions and apartments do not have a big signboard at the entrance unlike hotels. And in most cases, the entrance is locked, so when you visit for the first time, you need to ring the intercom to have it opened.

First of all, someone will definitely be there to help you, but you should tell them your arrival time just in case. I think you don’t need to contact them if it’s a sensible time like 3pm to 6pm. We also arrived after 6:00 pm, so we didn’t contact them.

When I arrived at the apartment, I was greeted by a nice looking guy at the reception. He speaks fluent English and of course Spanish, but I guess he can speak French as well. I’m jealous.

This guy is an illustrator or a designer, and he gave me this beautiful map of the city that he made.

This map is very well made, and if you look closely, you can see the bars, restaurants, and cafes near this pension. We were also able to get it in a file. Because it is more convenient to be able to see it with iPhone.

And this board behind the reception desk was also very nice. It looks like he writes and updates it every day by himself.

The room was very stylish and comfortable, it was kind of a shame that it was only for one night. We will use it again on our next visit.

Click here for more information on this pension. Very highly rated! If you are visiting San Sebastián, you should definitely try it.

Walking around the city, atmosphere of the city, history, etc.

The style of sightseeing here is basically walking around the city like other cities. Maybe it’s because the city is cosmopolitan, but the atmosphere of the buildings and the town is the same as in Spain (or is it natural because it’s Spain?). (Well, it’s natural because it’s Spain, isn’t it?) You can see Basque signs and nameplates everywhere in the city, but I think the overall atmosphere was not so Basque.

Especially because Guernica, which I visited a few days ago, had a strong Basque flavor, I can only compare the impressionism of San Sebastian with the atmosphere I felt in Guernica, so there may be a lot of individual differences in the way you feel.

However, I loved the atmosphere of the old town. 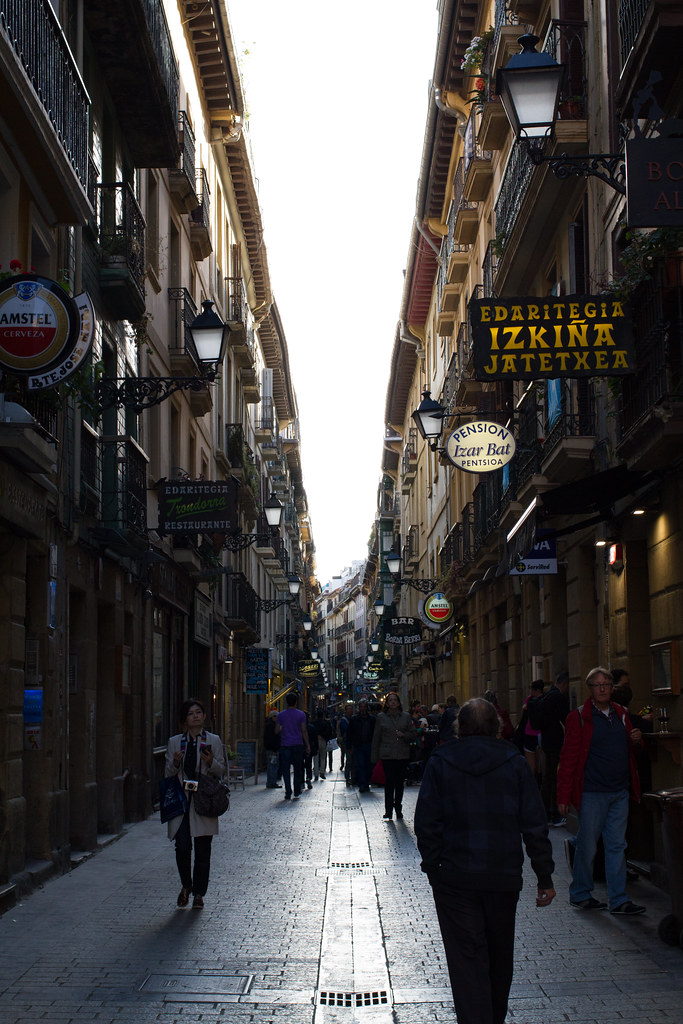 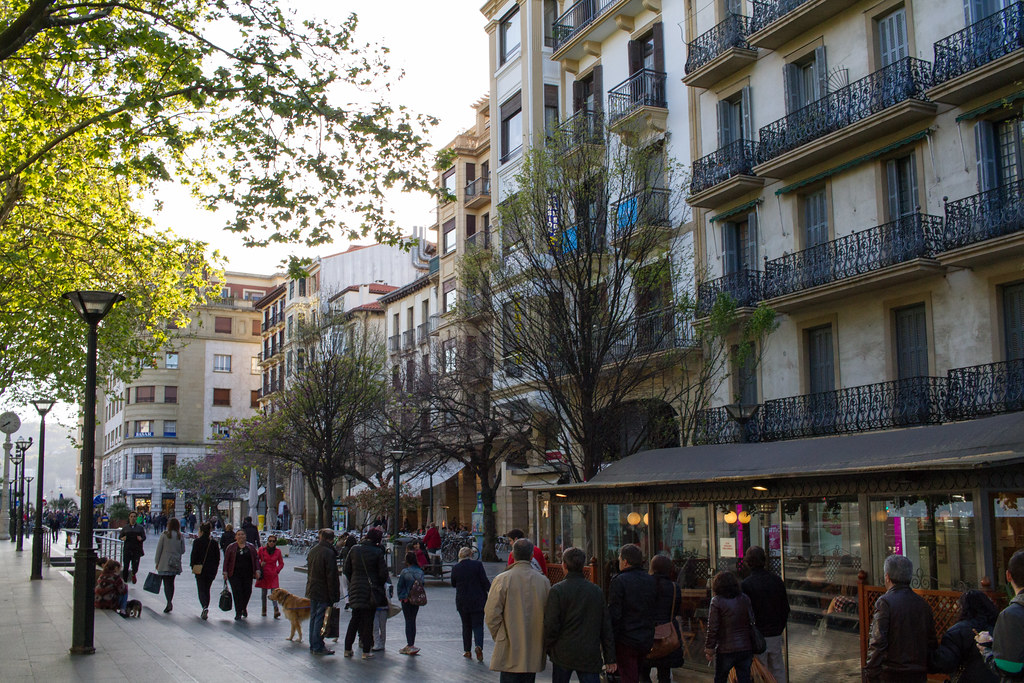 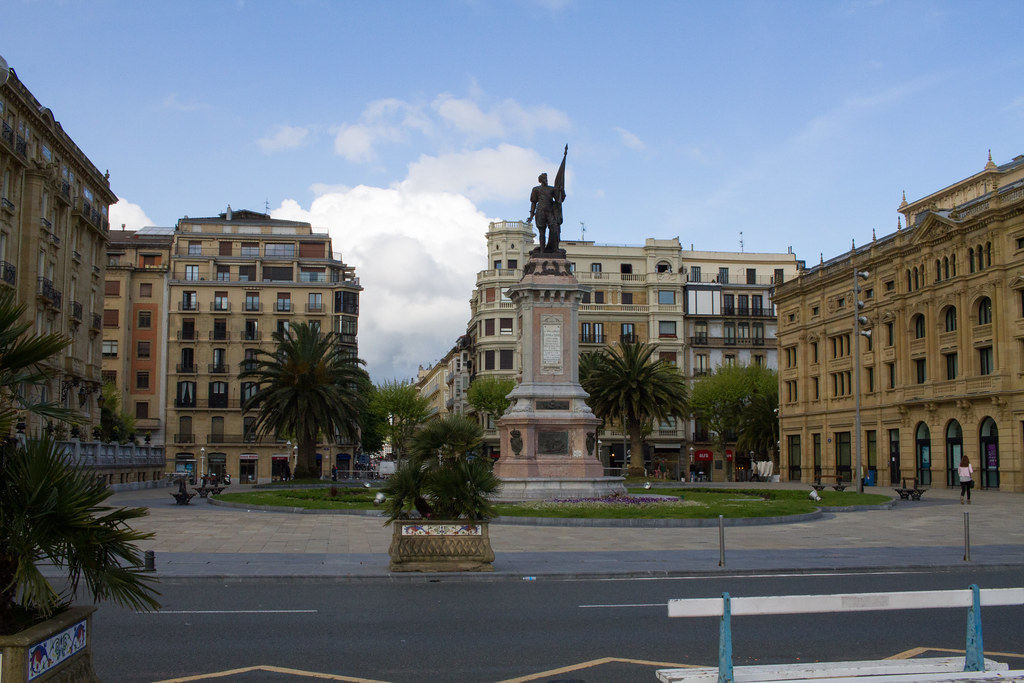 San Sebastián is famous for its gastronomy, and there are many bars and restaurants in the old town. We will introduce them in the next article.

The old town is located on the east side of the La Concha coast, which characterizes San Sebastián. Of course, there is a church. It’s called Santa Maria Church. 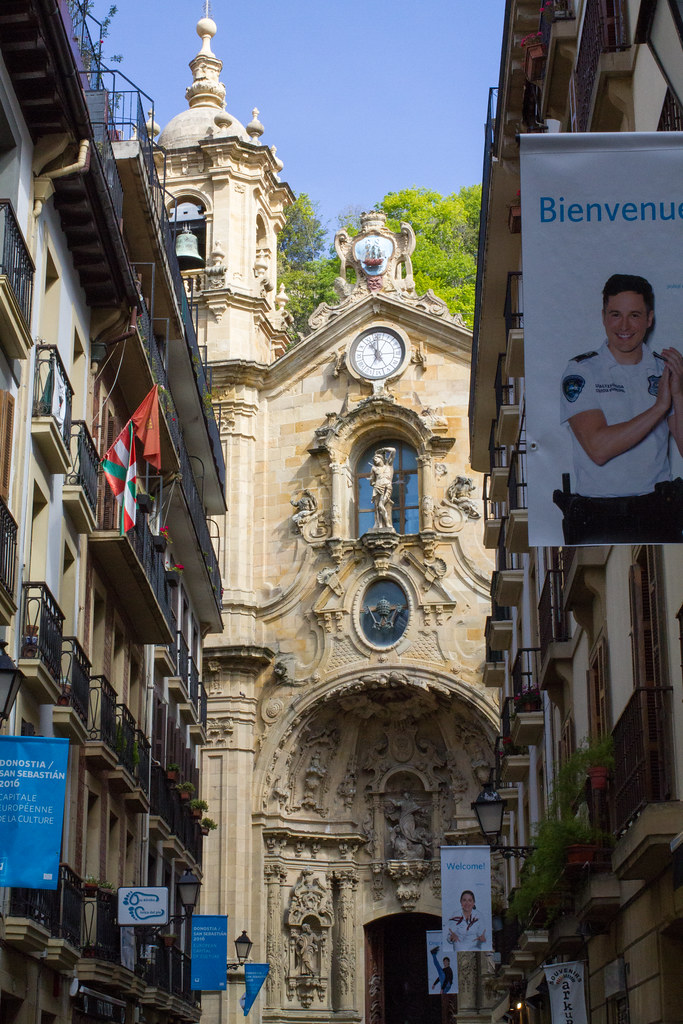 This one on the old town side looks like a housing complex. I felt this kind of atmosphere is very Spanish. In front of this building is a small square, but I couldn’t take a good picture because it was full of cleaning trucks and transporters’ cars when I visited in the morning. So, I introduce only the building. 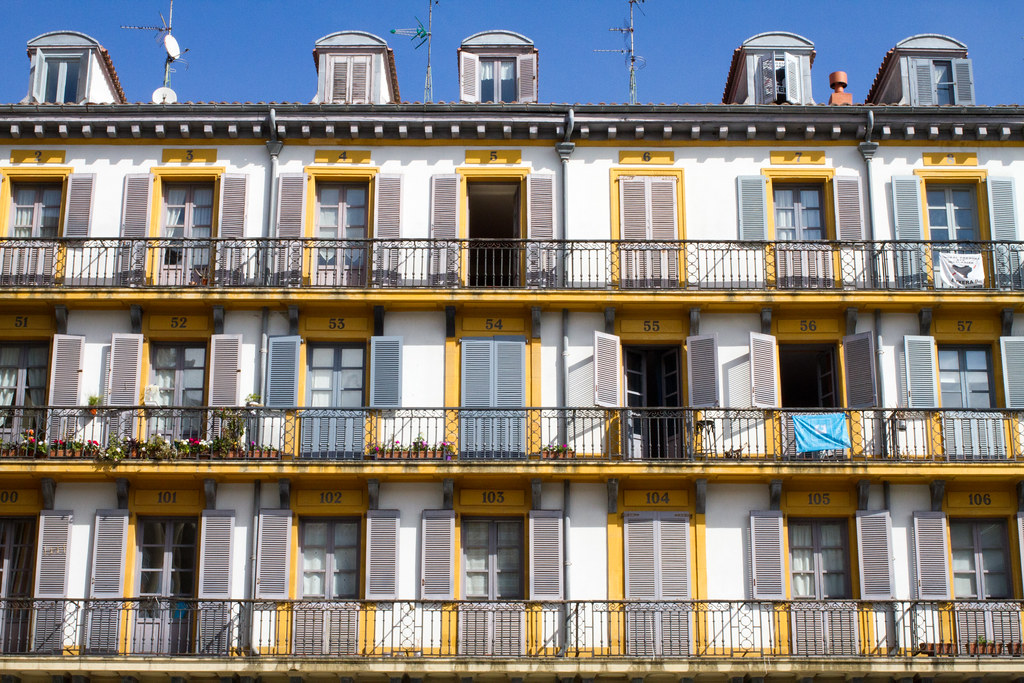 The atmosphere of this housing complex was the same as what I felt in Guernica. The point is that I’m just saying that it’s Spanish or Basque without very firm criteria in my mind, and I’m sorry, but I hope you can understand that.

The promenade along the Urmea River, which flows through the city, is very refreshing. 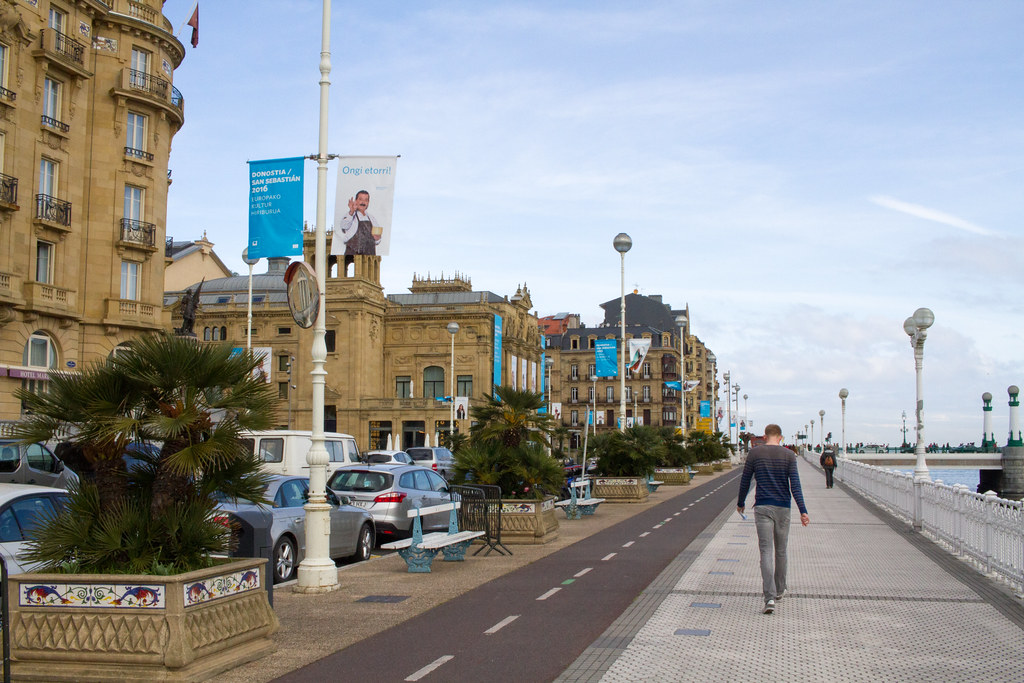 And the bridge over the river was also very artistic. It’s called “Maria Cristina Bridge.” It’s one of the most famous places in San Sebastián. 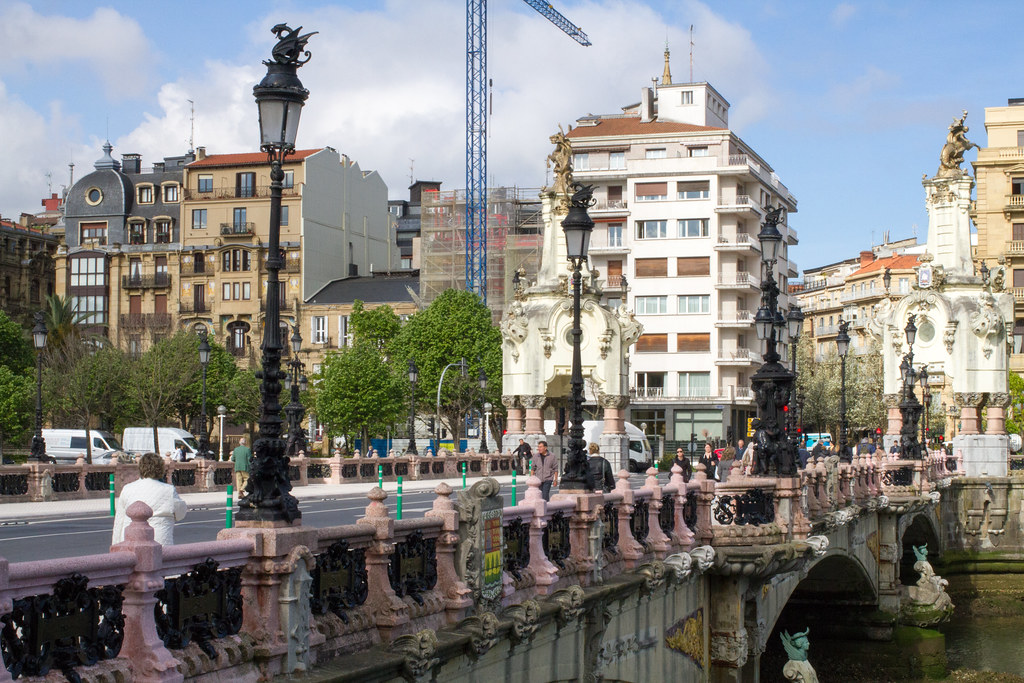 By the way, San Sebastián is of course a famous tourist city not only in Spain but also in Europe, but there are not many so-called English or American hotels (in other words, big resort hotels) in the old town side, but there are a lot of them in the La Concha coast side. Well, San Sebastián is also a resort. But I don’t like this kind of place at all, so of course it’s not my choice. 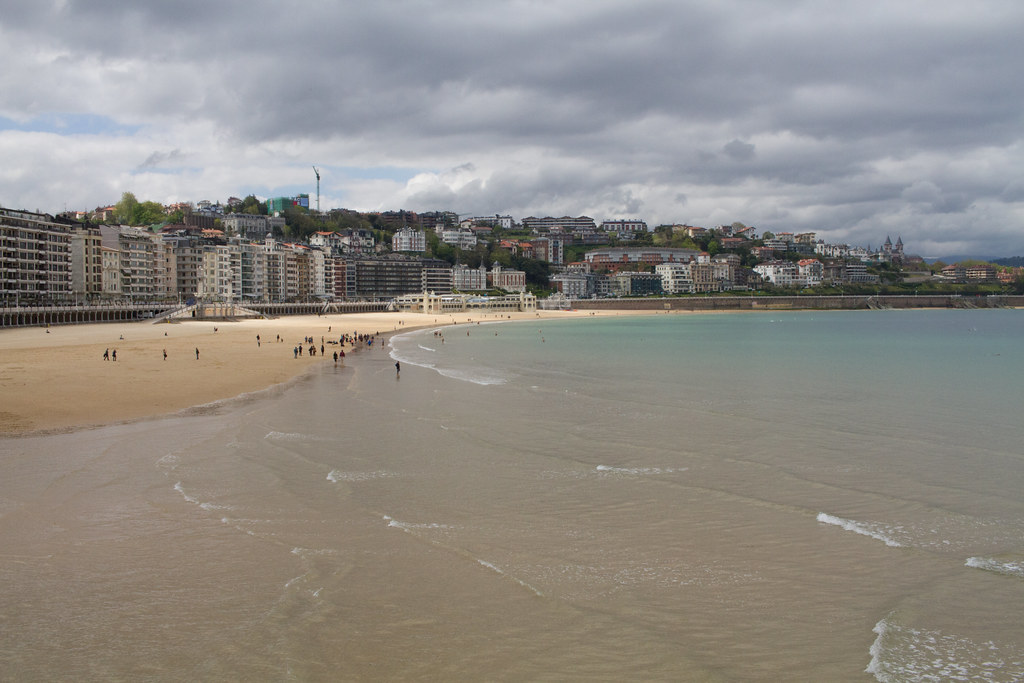 However, if you want to swim at this beach in summer, you might have to stay at a hotel near this bay. But it was not so beautiful beach, so if you want to enjoy the beach, I think you should go to another area.

This building along the beach & on the old town side seems to be a library. Is it something that can be used by tourists? If I had more language ability, I might have visited there. There might be such a trip to spend slowly in a library abroad. 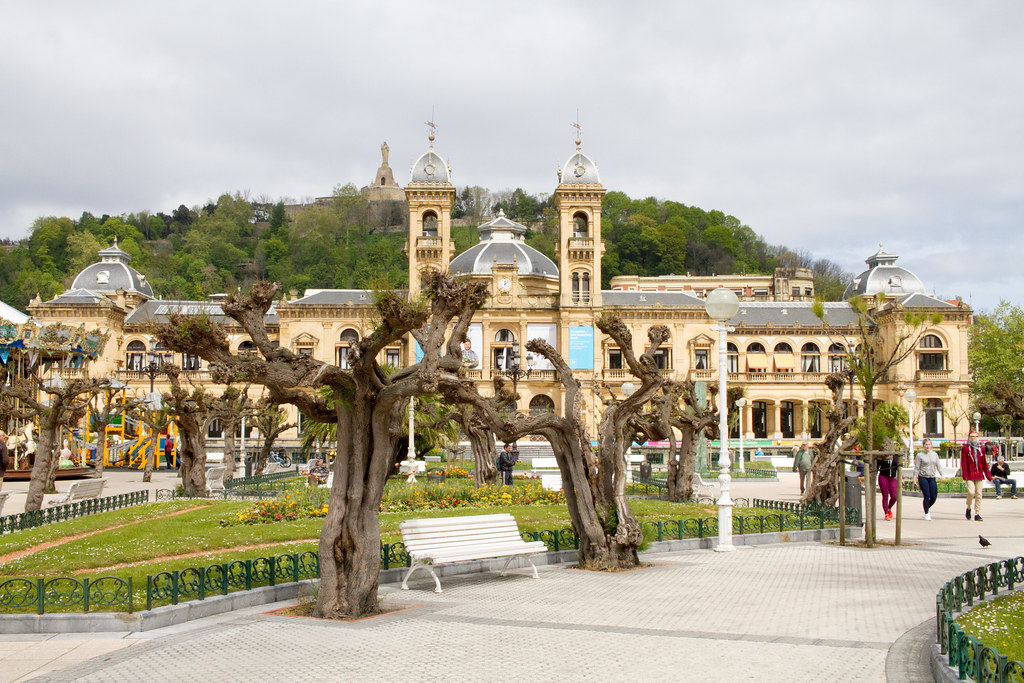 Behind you can see the statue of Christ at the top of “Monte Urgull”. We tried to climb up here after this. (I’ll explain later.)

Selected as European Capital of Culture 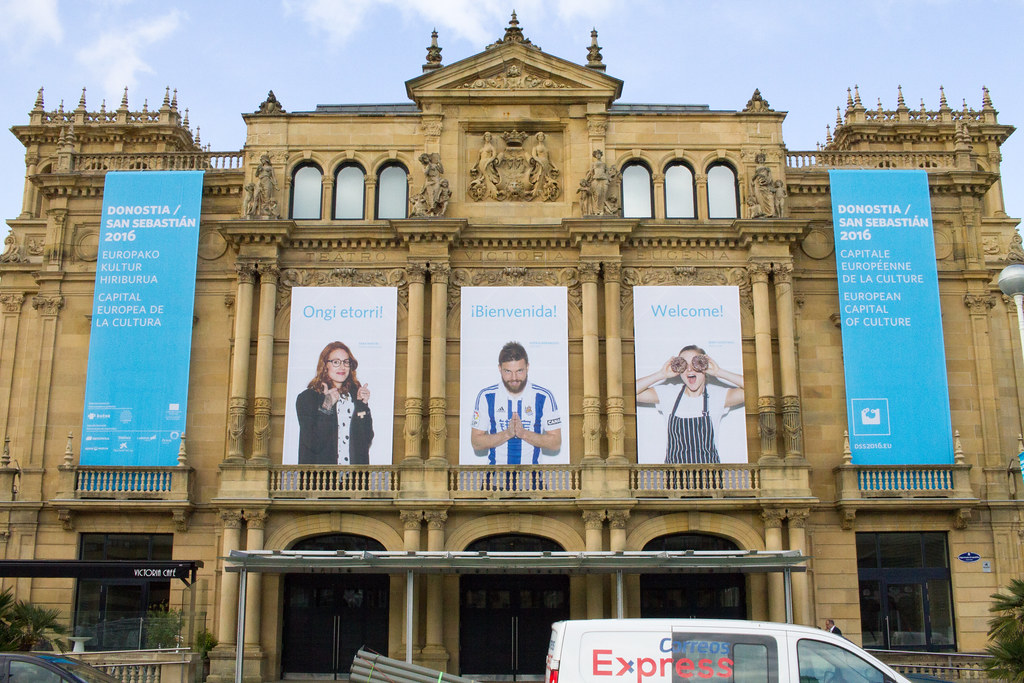 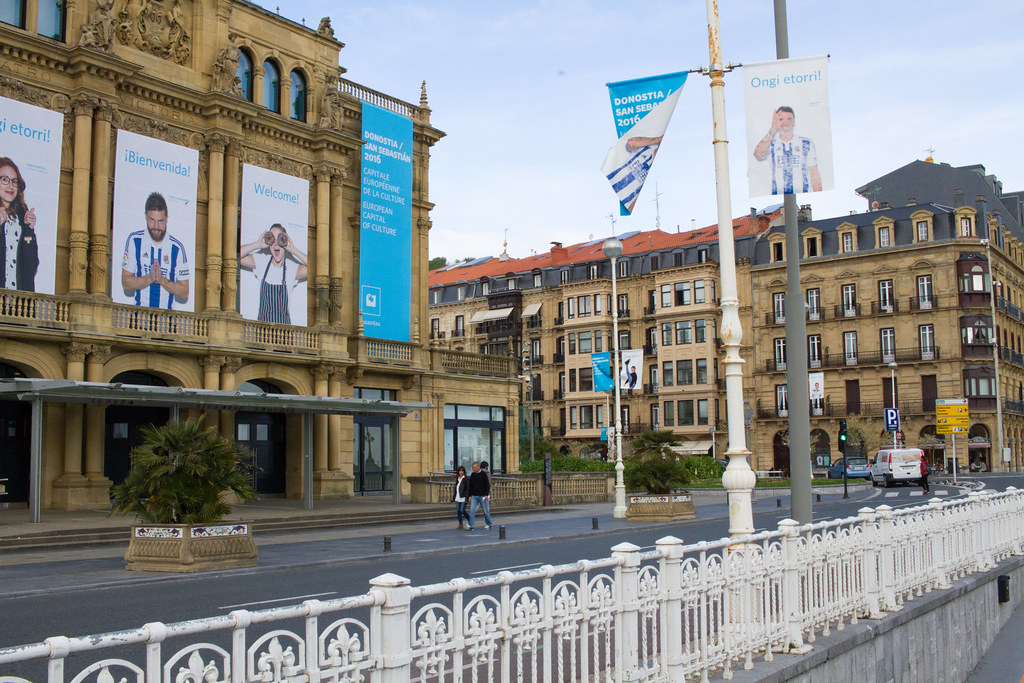 By the way, “European Capital of Culture” means

According to the study, with some exceptions, the impact of the project has been short-term, but it has led to an increase in the number of tourists, the creation of jobs, the development of infrastructure, and an increase in the name recognition of the city.

Kursaal International Convention Center is a unique building by the sea, and many events are held here. However, it was still morning when we visited, so it was not open. 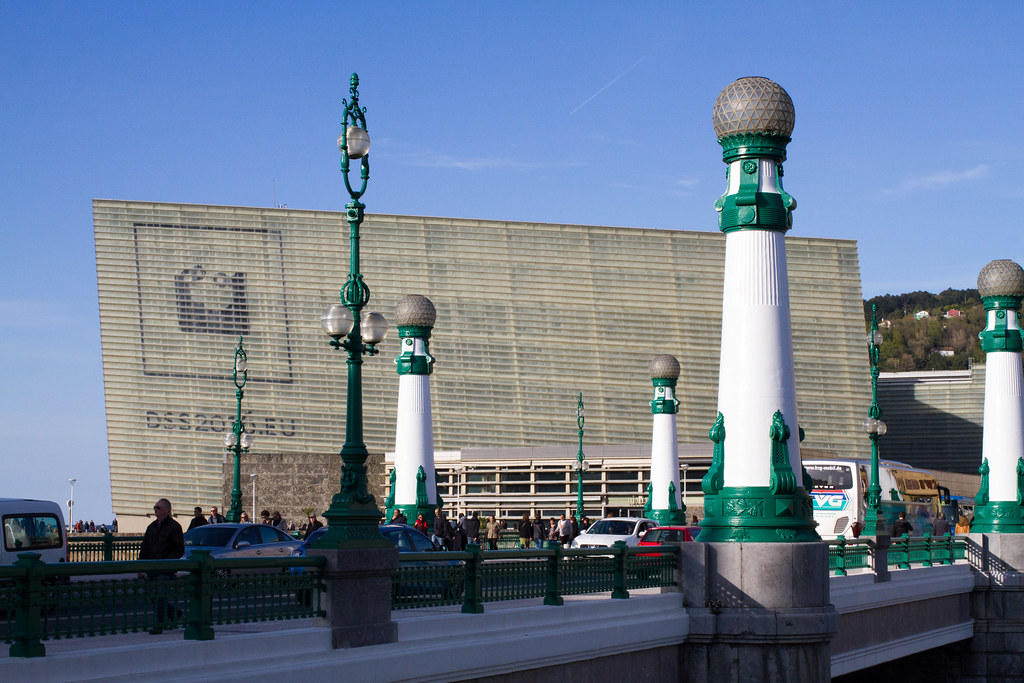 However, we didn’t participate in any particular events. There are other areas that I want to see, so it is quite difficult to adjust the schedule so that I can fully enjoy these events. It would be possible if we had about a month for vacation…. (I wonder if there will ever be a day in Japan when we can have a vacation of this length.

The tourist information center in the city had a lot of information about the European Capital of Culture, so even though I didn’t go to many events, I got a lot of pamphlets as a souvenir.

The language is difficult, but even if you could read it, it would be quite difficult to understand the cultural events that take place in Europe because they are so diverse. When I see paintings and historical assets, I often think that their cultural level is really high and I am often surprised. And I really feel that I have to learn more and more about them.

Since I’m writing this blog, I hope to be able to write articles that are a little more cultural and educational… I think my theme for the future might be to do some research on the history and culture of each city at the libraries I mentioned earlier. 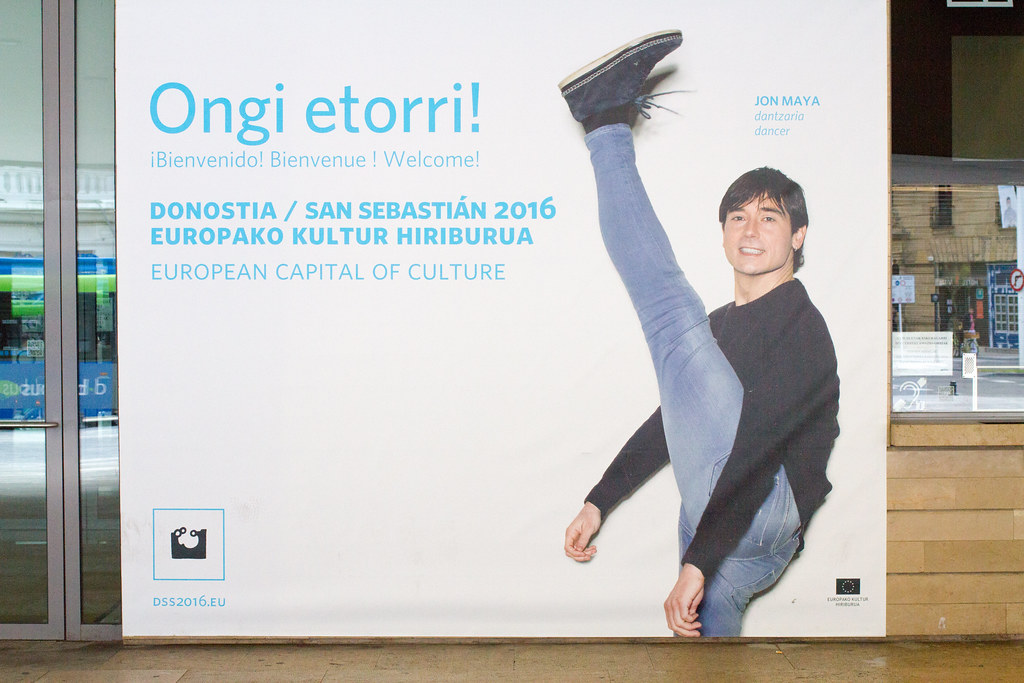 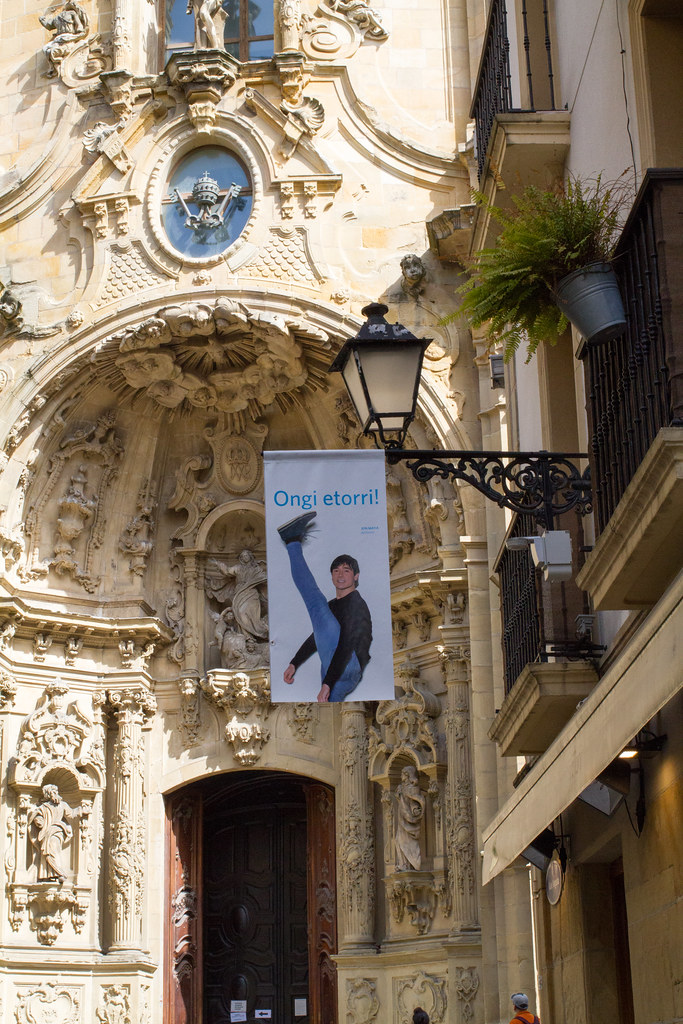 This dance event could have been interesting.

In addition, I found this research about the European Capital of Culture. I wonder what kind of results will be achieved in San Sebastián this time.

From two mountains overlooking the bay

So, where is the best place to take pictures overlooking La Concha Beach, a synonym for San Sebastián, which is often seen on the web? It’s the mountains at either end of this bay.

First of all, the view from “Monte Urgul” on the east side. This one is on the old town side, so we walked up. 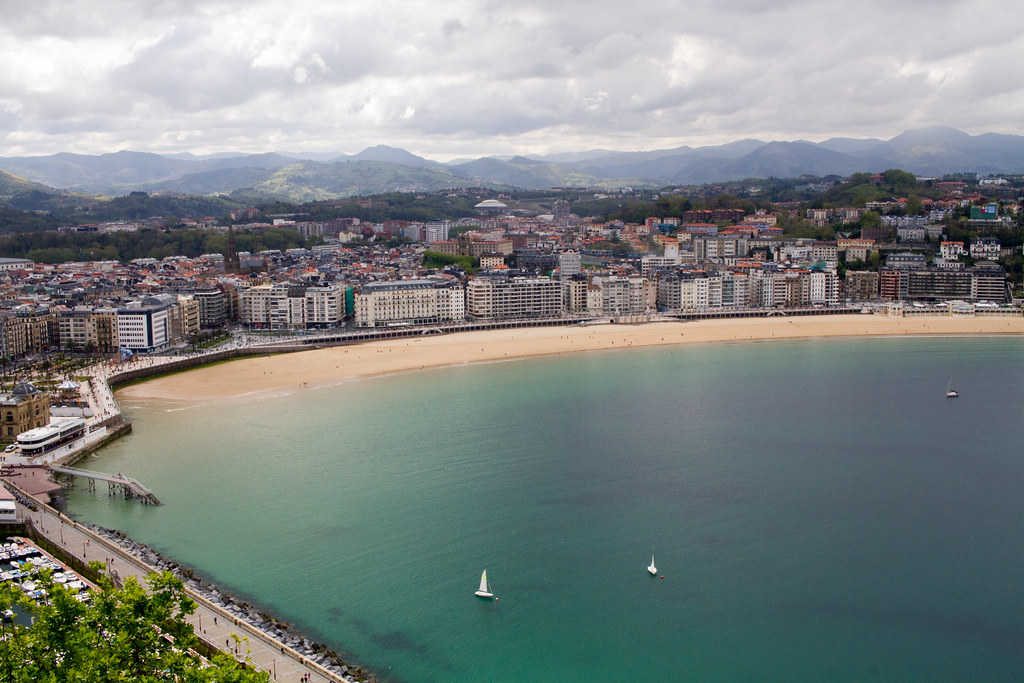 Next was the other side, the west side, “Monte Igerd”, which I think was higher than Monte Urgul. You can get there by cable car from the bottom, but it’s on the opposite side of the old town where we stayed, so we decided to visit there by car at the very end, just before we left the town. The parking lot was paid.

There was a hotel on top of the hill with a tower that served as an observation deck. 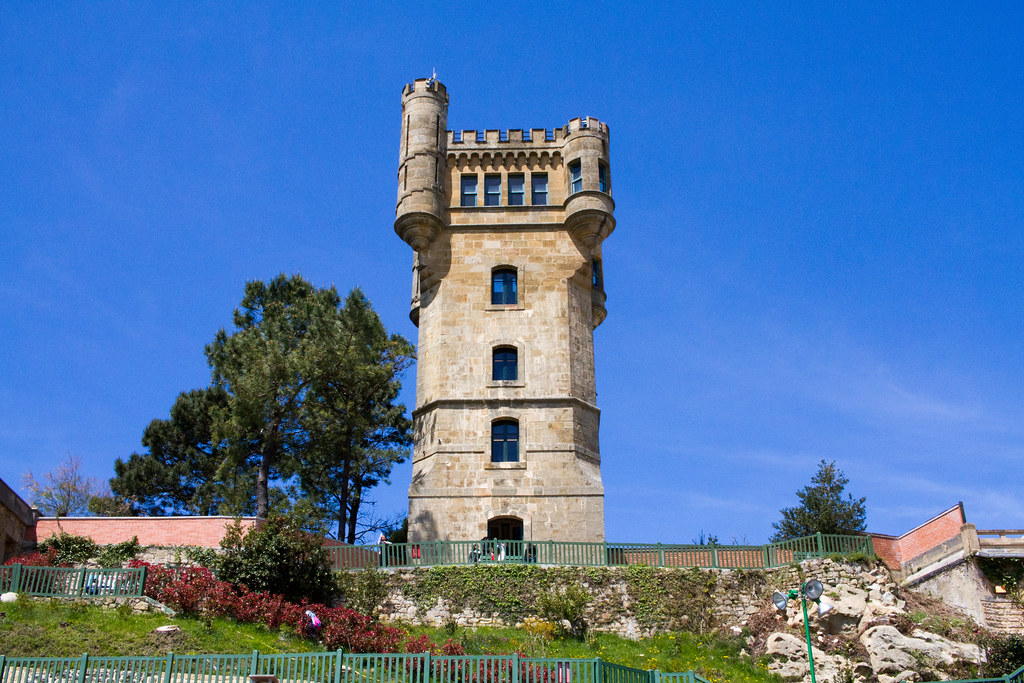 That tower is undoubtedly the most beautiful spot to view the city and this bay.

After all, this city is also a must revisit. It was a kind of inspection visit. This is the best gourmet city in Europe. It is worth to visit for gourmet. It’s not so far from Bordeaux.

I knew Barcelona was the place to be!Departure from Perpignan station at 8:57 AM.I wasn't sure if I would be able to buy...

Date and Time of Visit: April 25, 2016 at approximately 7:00 p.m.この日最後の美しい村、そしてこの日の宿泊地となります。実は同日3つ目の村「モレッラ」を出発する前に、この日の宿...

It's finally the last day. This is the last update from there.This is the end of this year's GW trip, although it seems ...

昨日帰宅したときにポストを見ると、なにやら外国からの手紙が…。It seems to be from Spain. It's some kind of unfamiliar envelope."I had a bad feeling abo...