Chinchón is one of the most picturesque villages in the province of Madrid and was declared a national historic monument in 1974. It is known for its anise, garlic and wine. It was already a famous tourist destination in the area, even being listed in the Globe-Trotter, but it was only in 2017 that it was chosen as one of the most beautiful villages in Spain.

Geographically, it is not so far from Madrid. It takes about one hour by car. However, the highway is unexpectedly crowded, so you might want to allow a little extra time if you are going by car.

As for the parking lot, there was a free space at the entrance of the village. I think it is the most convenient to use here because it seems that tourist buses also park here. Street parking around the castle ruins is also recommended because it is relatively easy to park. It takes less than 5 minutes to walk to the center of the castle, so it’s not far.

By the way, the view from the parking lot near the castle is spectacular as you can see. 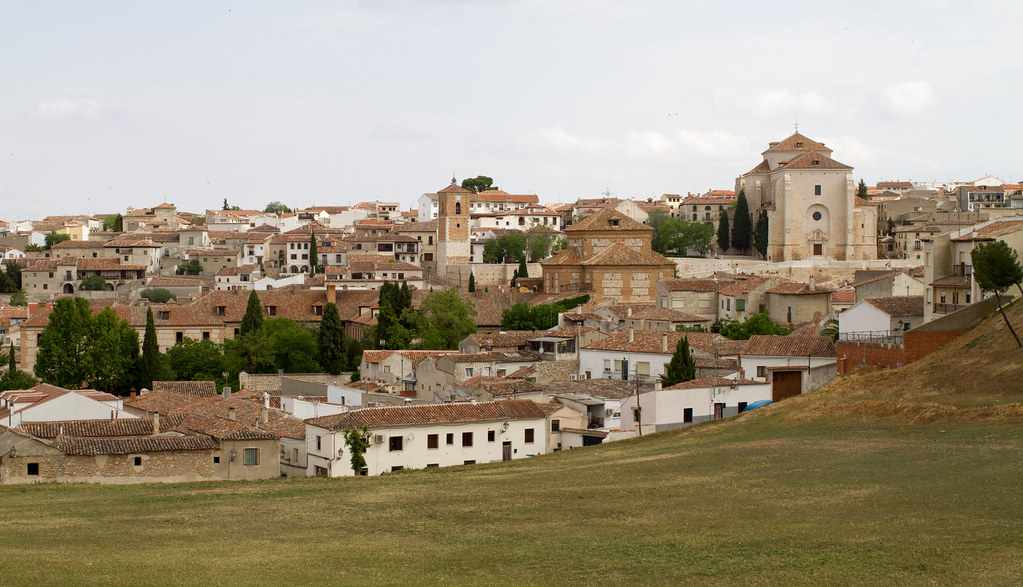 We came here from the city of Aranjuez. We arranged a parador in this chinchon for this day. We parked our car in the garage of the parador. There is a fee, but it is a garage, so you can feel safe in many ways. First of all, I parked my car in the space in the hotel, unloaded my luggage and checked in, then I moved my car to the garage which was a little bit far from the Parador. 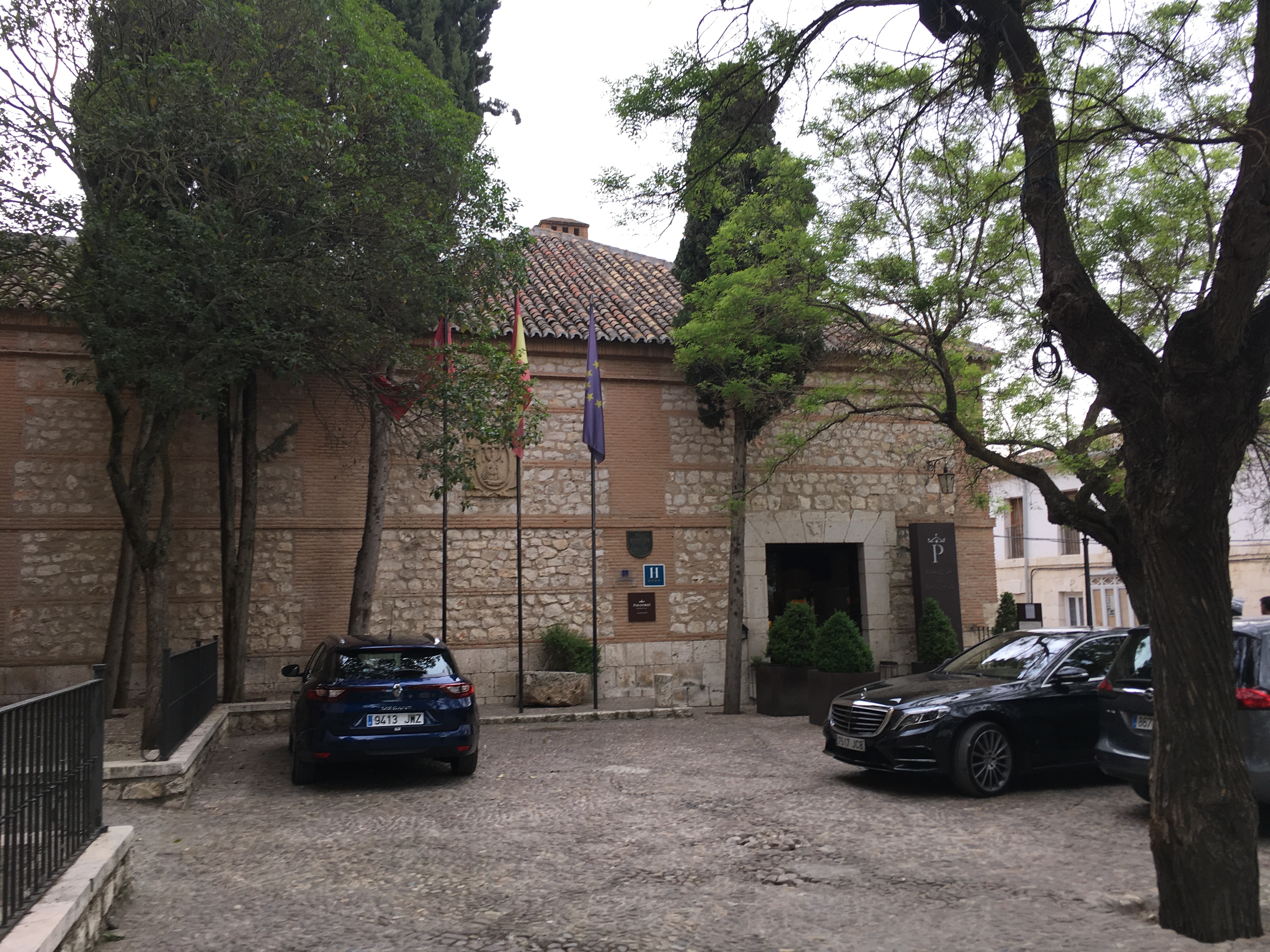 The garage looked like this. I think it was smaller than it looked. 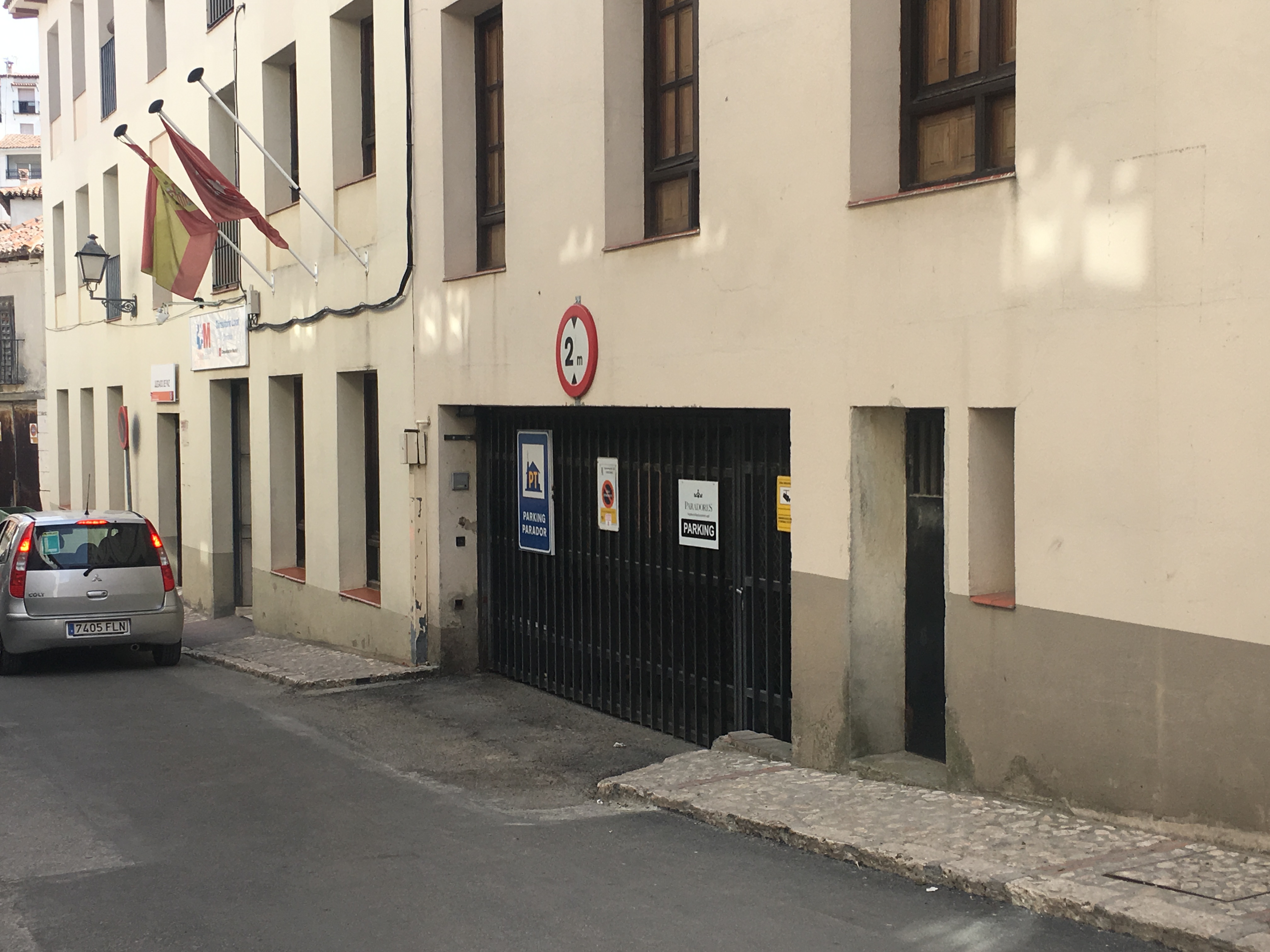 I think the best place to see in this village is the Plaza Mayor, which is about 10 seconds away from the Parador.

However, it is a pity that the place where the car was parked considerably. 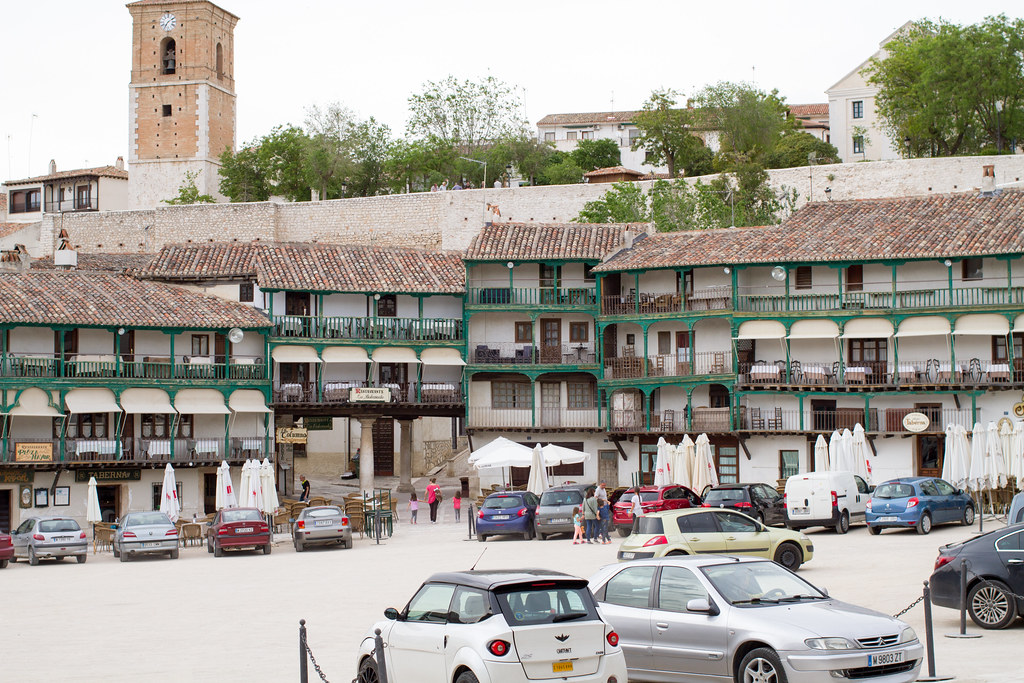 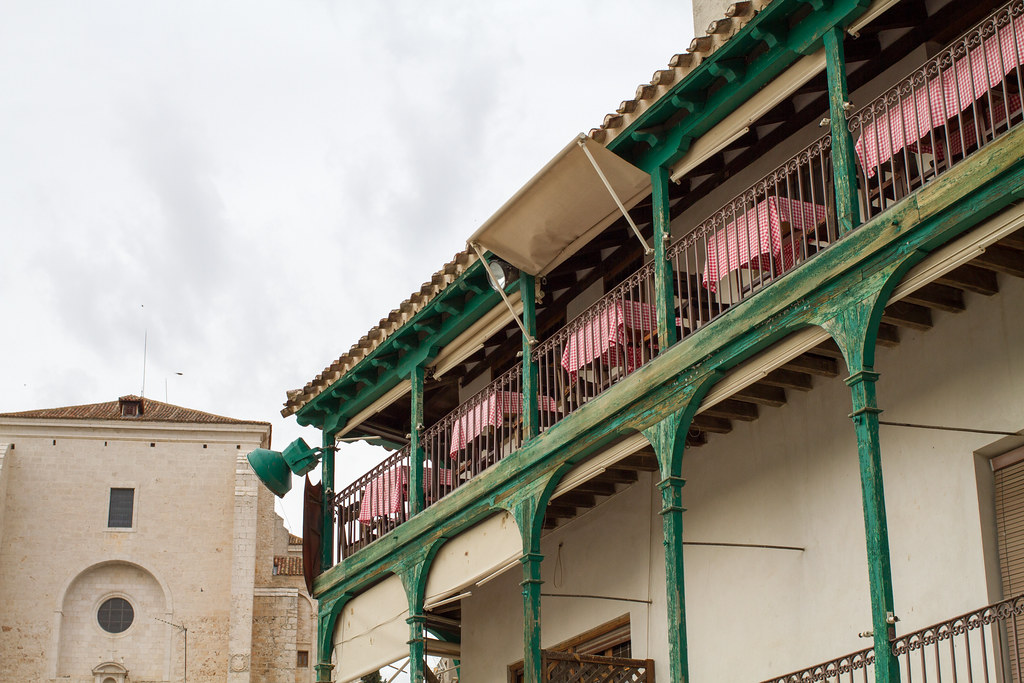 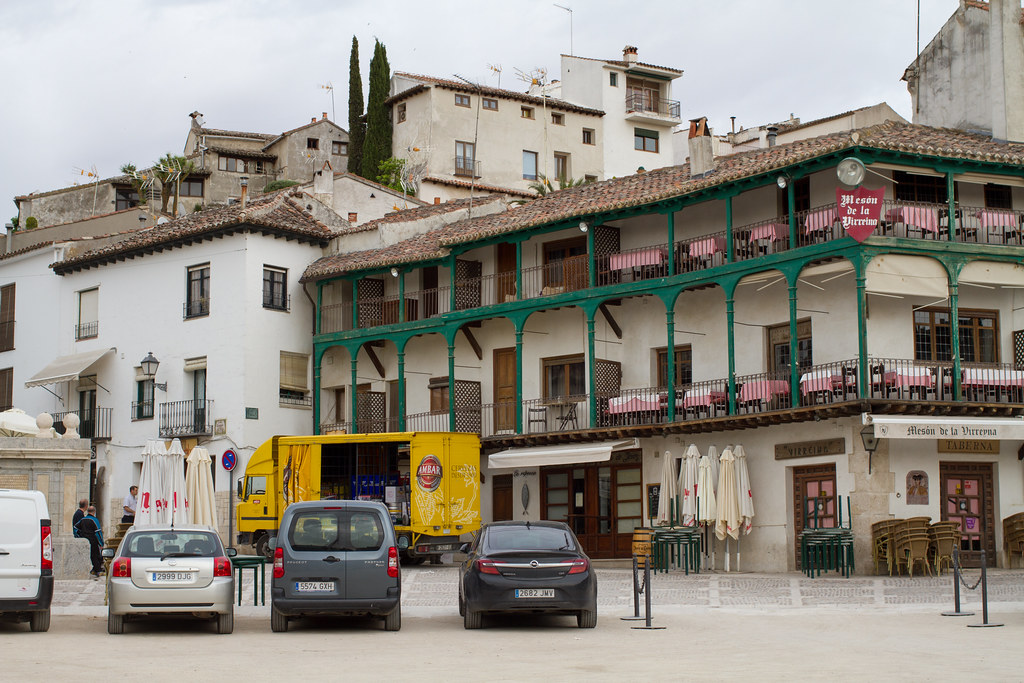 Not many cafes in the square were open. Because there were few tourists. 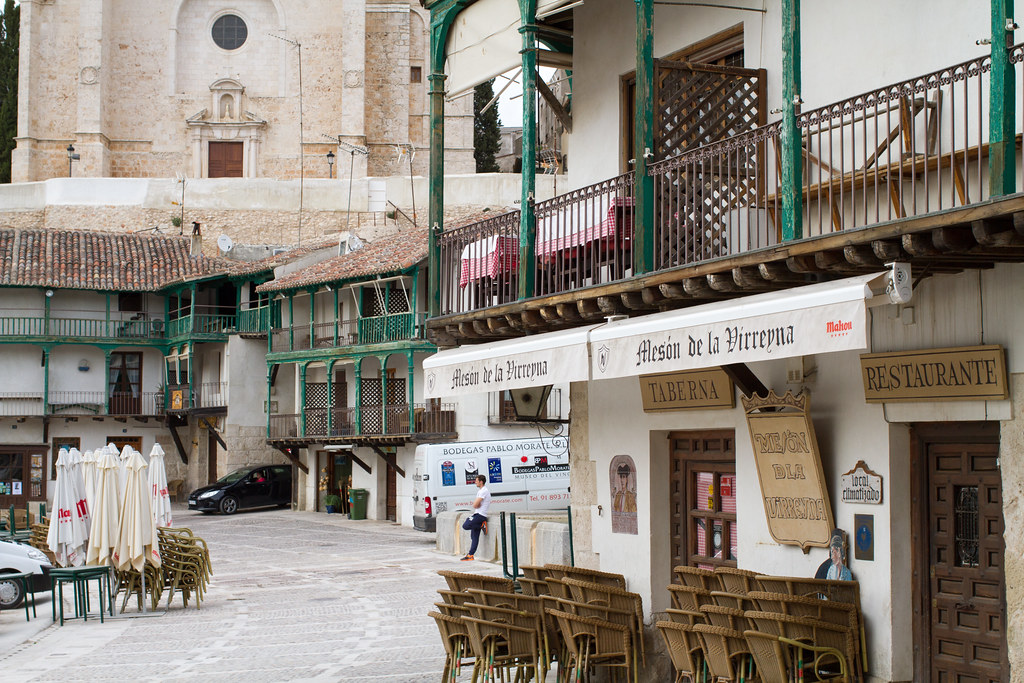 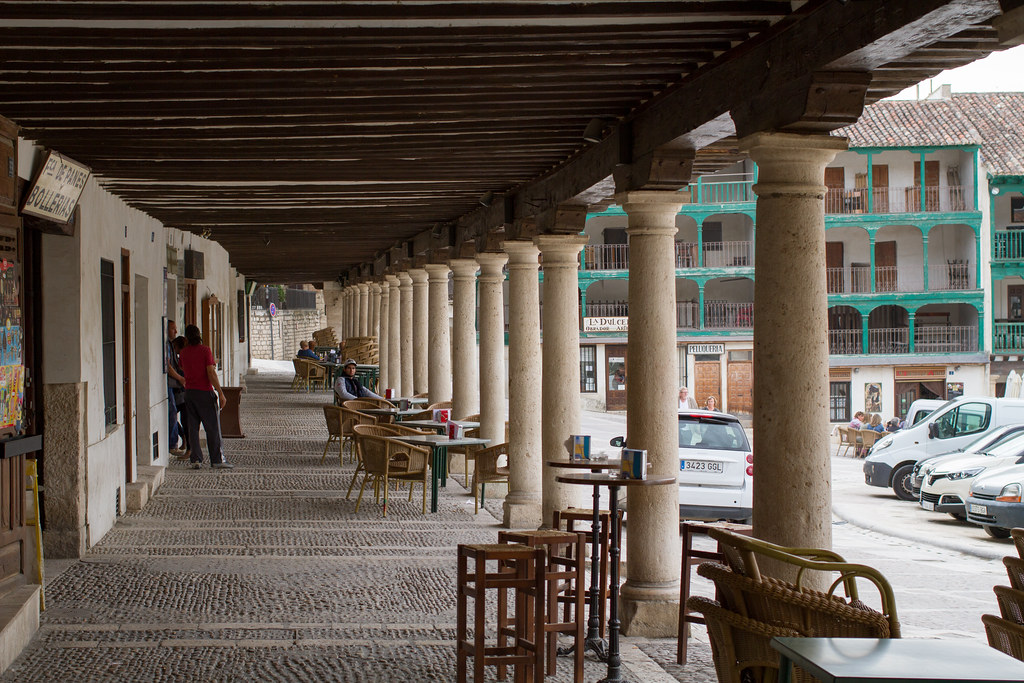 (photo of a deserted cafe) The tourist information center is located facing this square. Strictly speaking, it’s behind the building facing the square. I think it is open until 18:00, but it was closed around 17:30. We were able to go there just before that time, so we could get a map of the village. 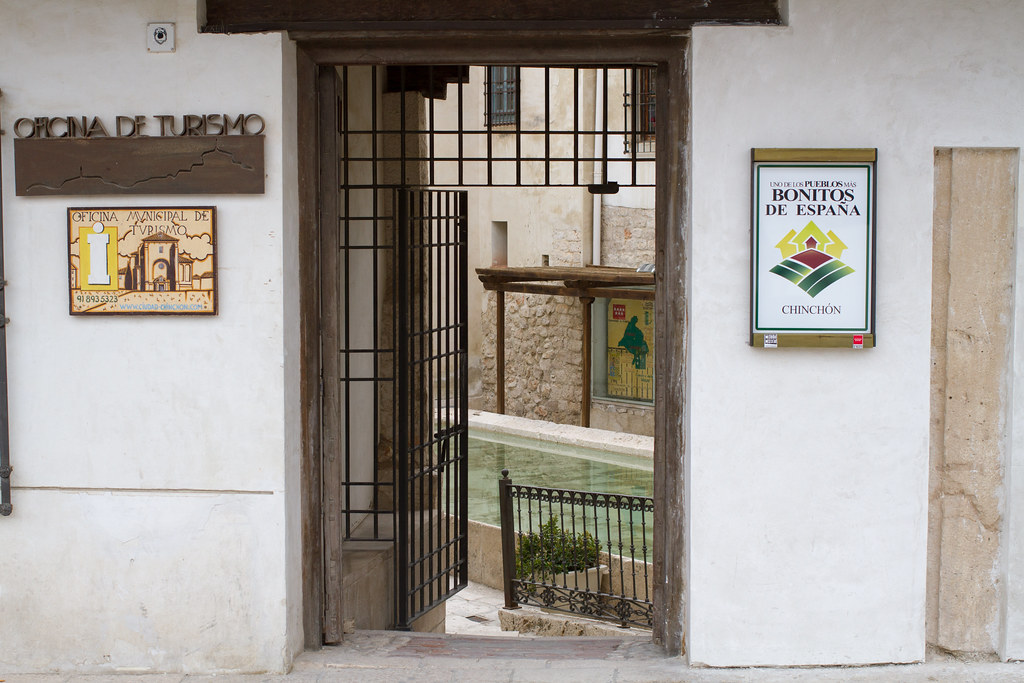 Basically, at any tourist attraction, if you ask for a map at the tourist information center, they will give you a brief guide about the city and the highlights. They will explain in simple English, so you won’t have much trouble understanding them. 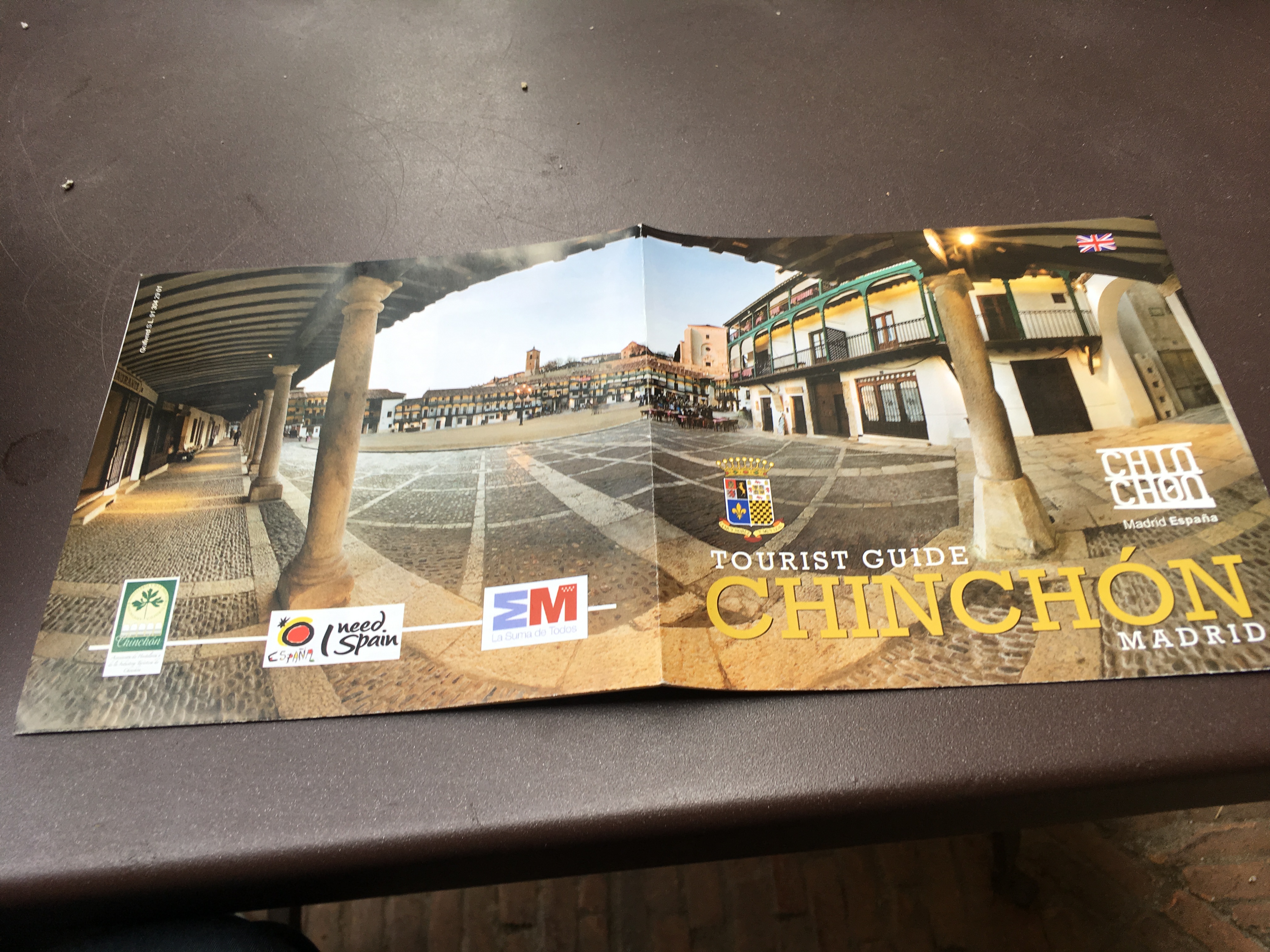 There are many historical monuments in the city. The representative one is a church called Mme Ntra Eglise. I wonder how to read it. I heard that there was a painting by Goya here, but I didn’t notice it. There is also a clock tower. There seems to be a theater, but it was not open when we visited. 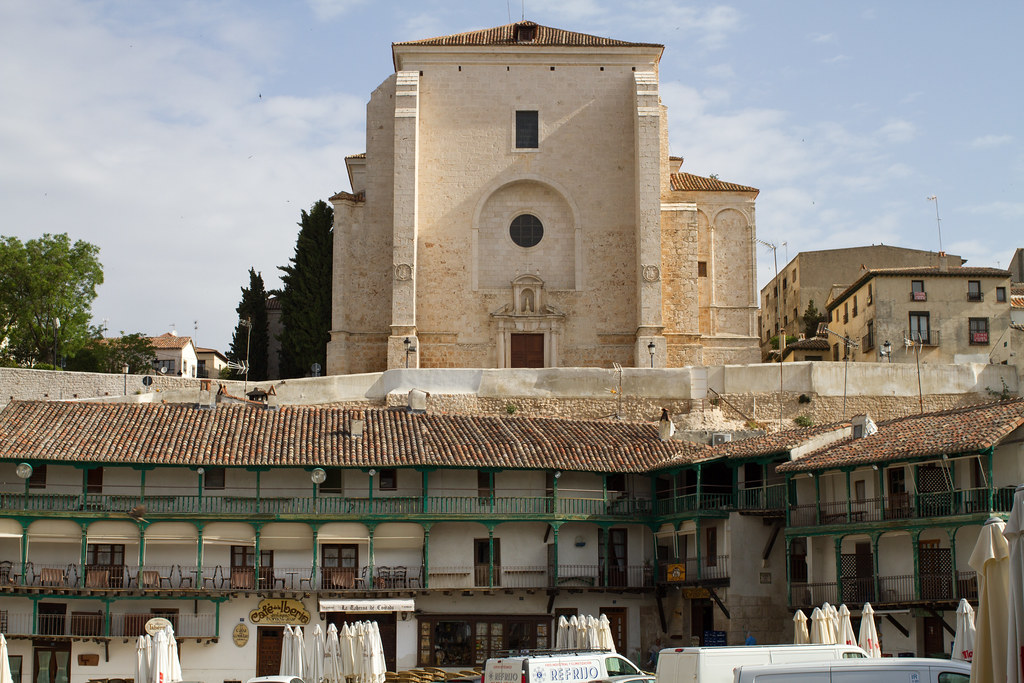 According to “Globe-Trotter”, you can only enter this church during the mass, so we could see this Goya’s painting only when the mass was going on. But when we visited there, they were just having a mass…. It was a pity that we didn’t notice it. Well, it happens often. However, this church is located on the hill of the city, so the view from there was great. 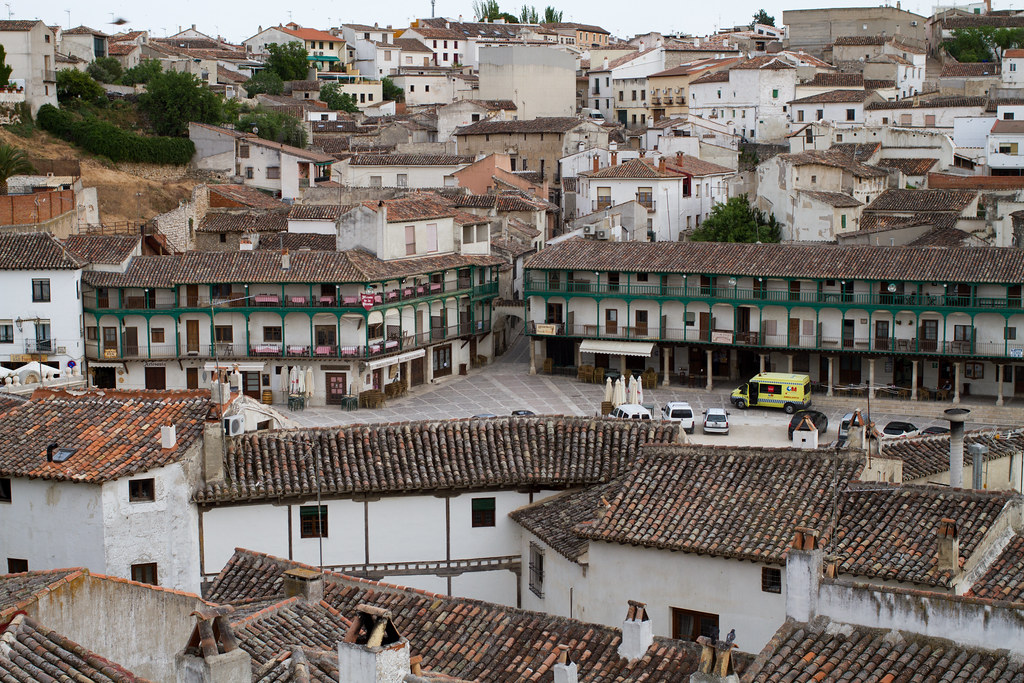 Now, let’s talk about the Plaza Mayor again. It’s quite a pity that it’s a parking lot now, but in summer, this Plaza Mayor is used as a bullfighting arena. It might be interesting to come here in summer. There are a lot of tourists from Madrid on weekends, it was written in “Globe-Trotter”. There was a model of the bullring at the entrance of the village (it was open but nobody was there…). 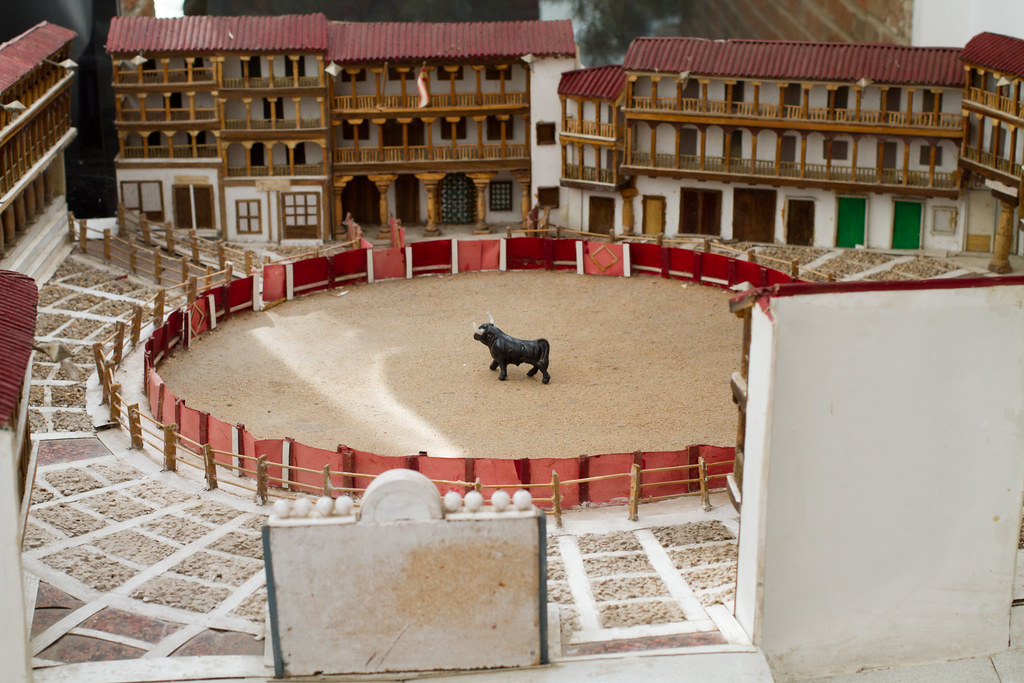 This town seems to host quite a variety of events… 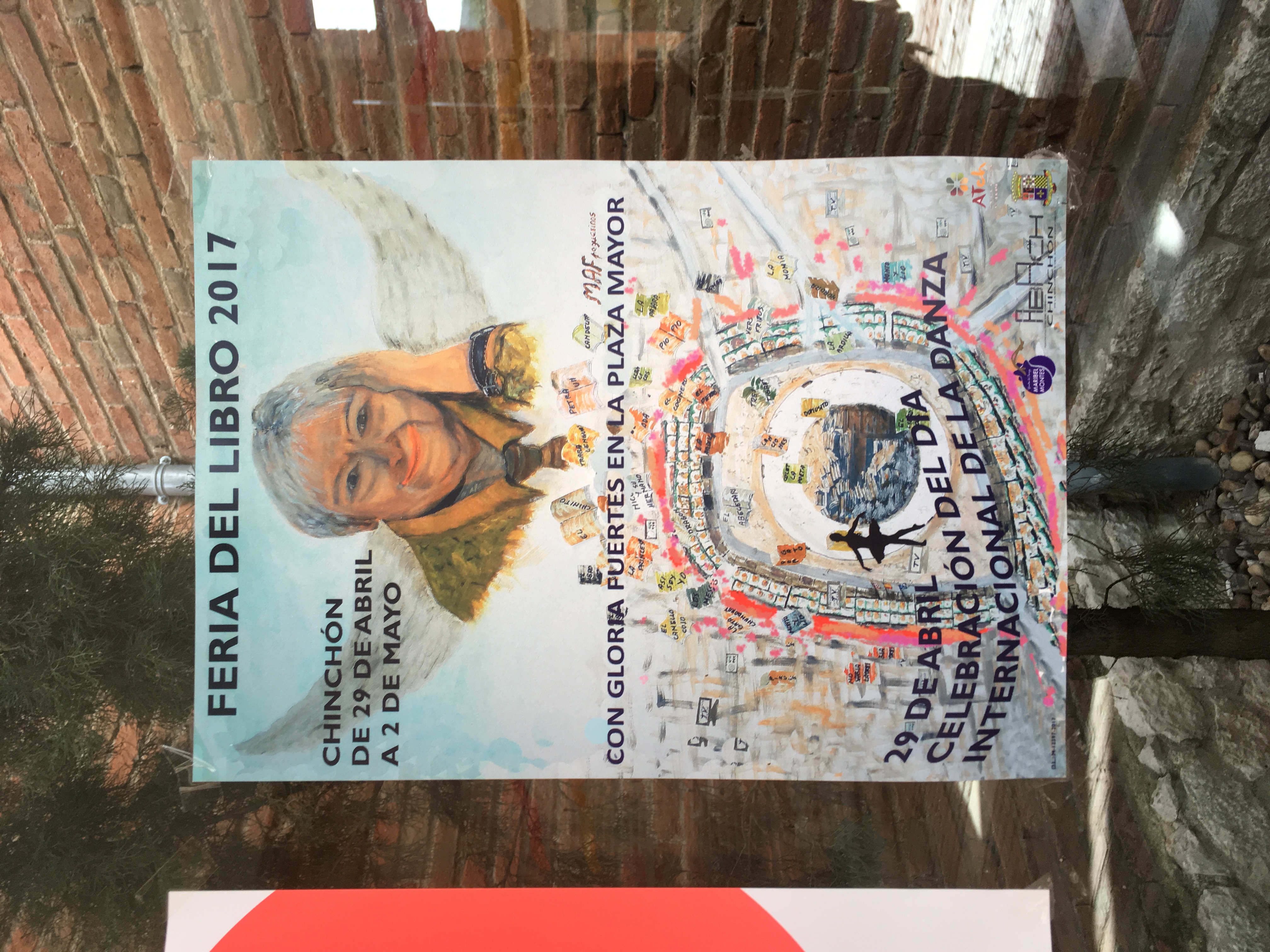 However, I wonder if the timing of the visit was bad, I felt that the stay was indigestion. Maybe it was just because I was tired because it was the last day of my trip. However, I think it was very worthwhile to visit.

We have been renting a car in Europe for 12 years now. In the beginning, the purpose of this trip was to travel to the a...

Date of visit: April 25, 2016, around noonTeruel, the tour of the beautiful inland villages of Valencia continuesThe tou...
Trujillo, the most beautiful village in Spain No.25 ★★★★★
April 2017 – Western Spain and Portugal Part 3: World Heritage Site No. 1 – Prehistoric Rock Art Sites in the Coa Valley and Ciega Verde
Home
April 2017 western Spain and Portugal of the journey
Copied title and URL