Last time, I just reported that I arrived! This time, I’ll write about sightseeing.

Breakfast in the apartment

We had plenty of hamon iberico left over from the first day of this trip that we bought on the Spanish side, so we had hamon for breakfast every day in our apartment. Unfortunately, there was no good bakery in the neighborhood. 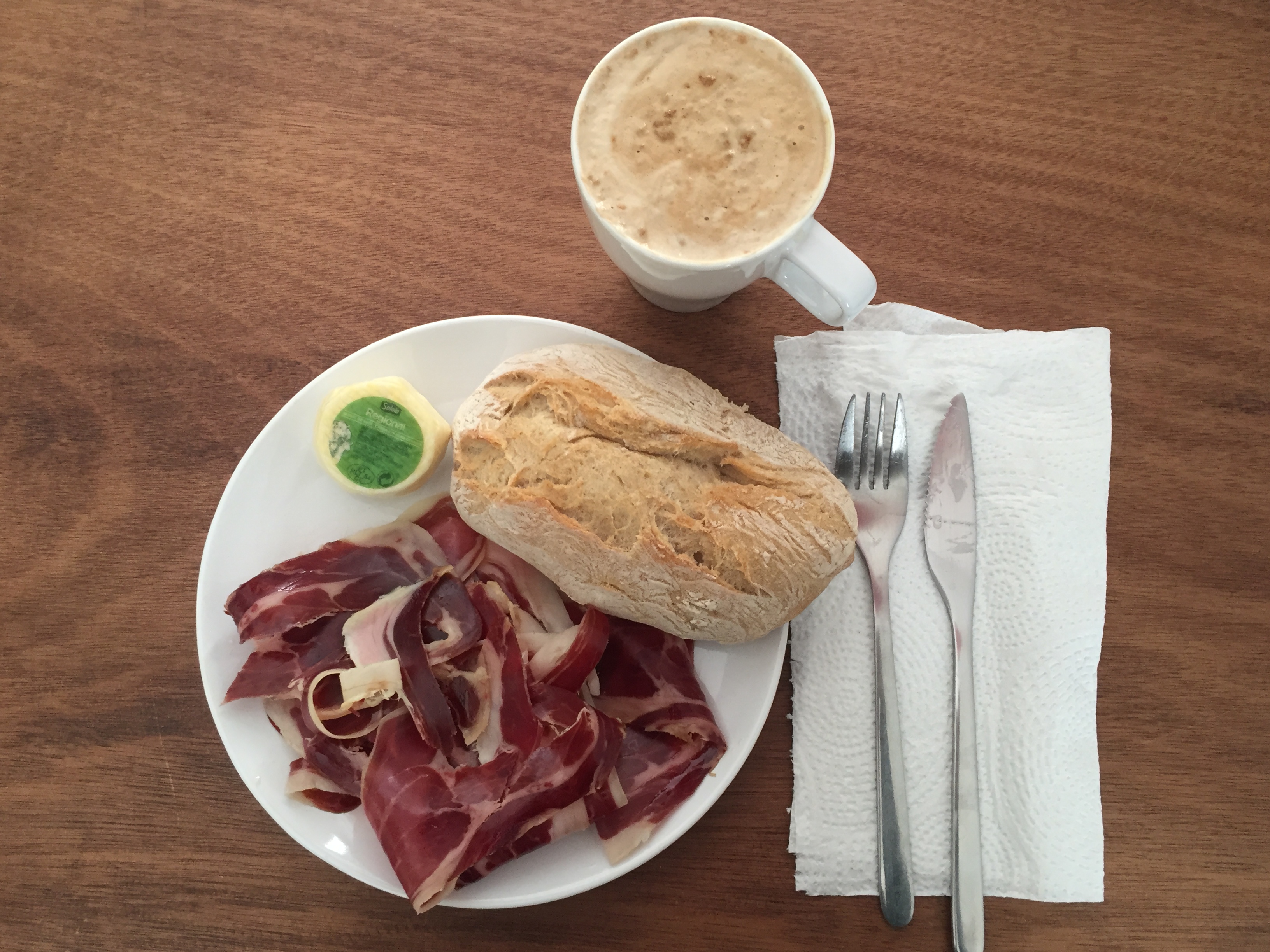 I had bought some cheese and water at the supermarket that the manager told me about, so I went with that. I ate so much jamon that I was full every morning.

Speaking of Porto, “Don Luis Bridge” is the most famous bridge in Porto.

Speaking of Porto, this railway bridge over the Douro River is the best.

This bridge was built in the 19th century, and the designer seems to be a disciple of the famous Eiffel. When you think about it, it seems to resemble the Eiffel Tower somehow. 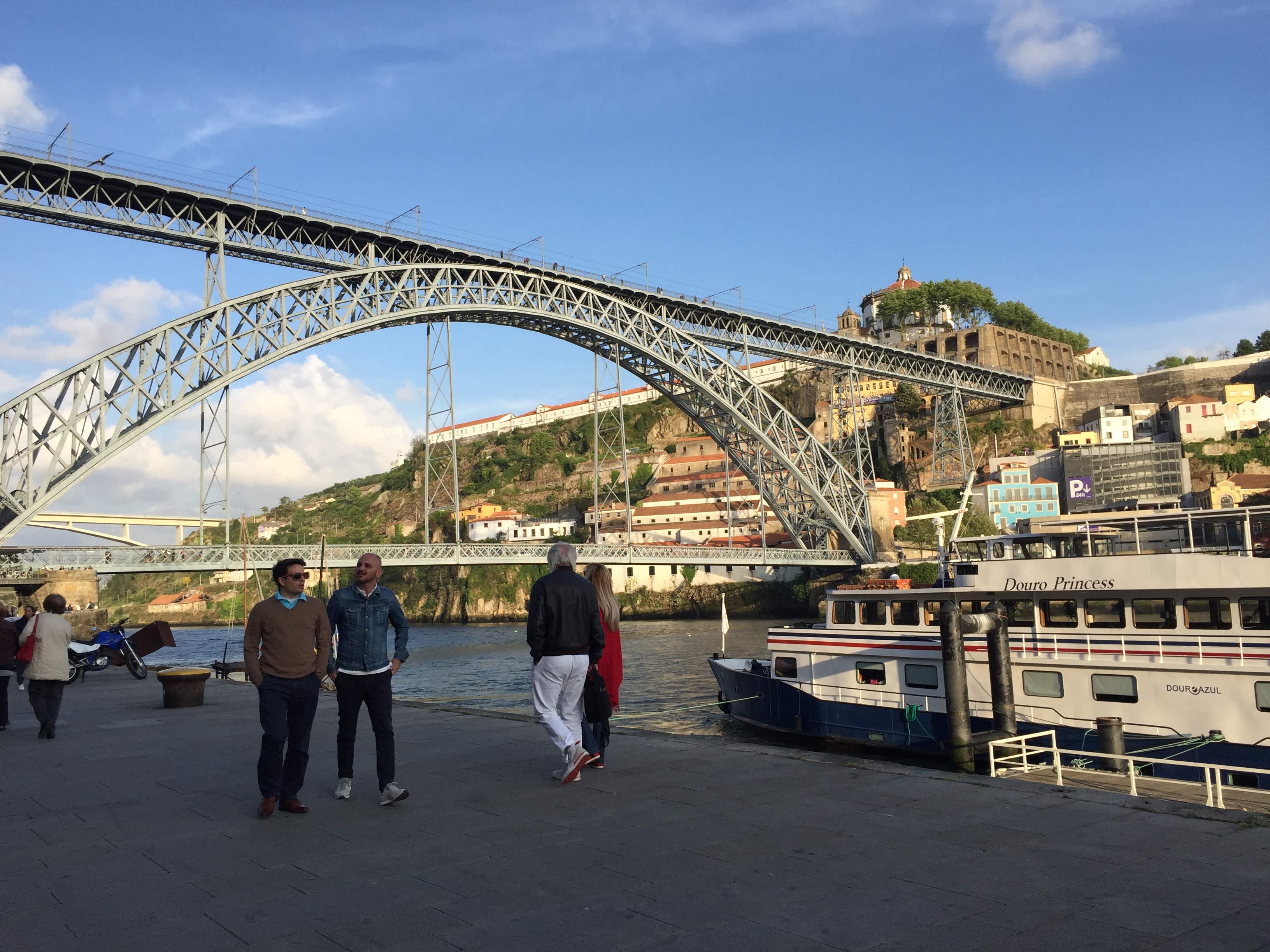 You can also walk on the bridge. You can take the stairs from both sides of the Douro River. 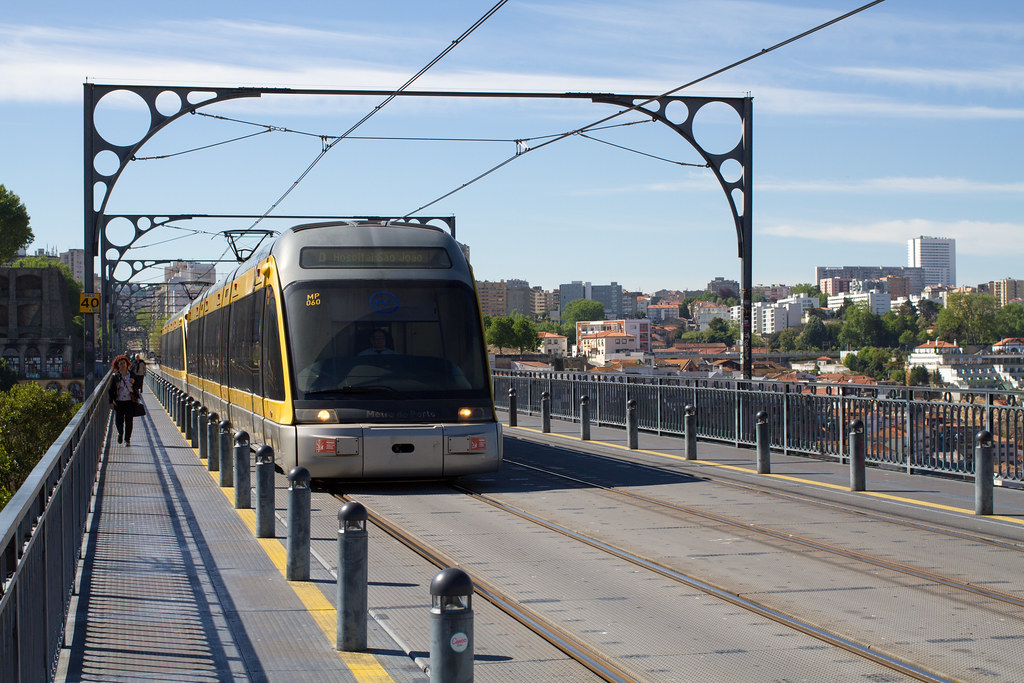 You can also reach the bridge by walking south along the main road from the station of San Bento. It’s a bit off the beaten path, but there is a cathedral on the way, so you might want to visit it as well. 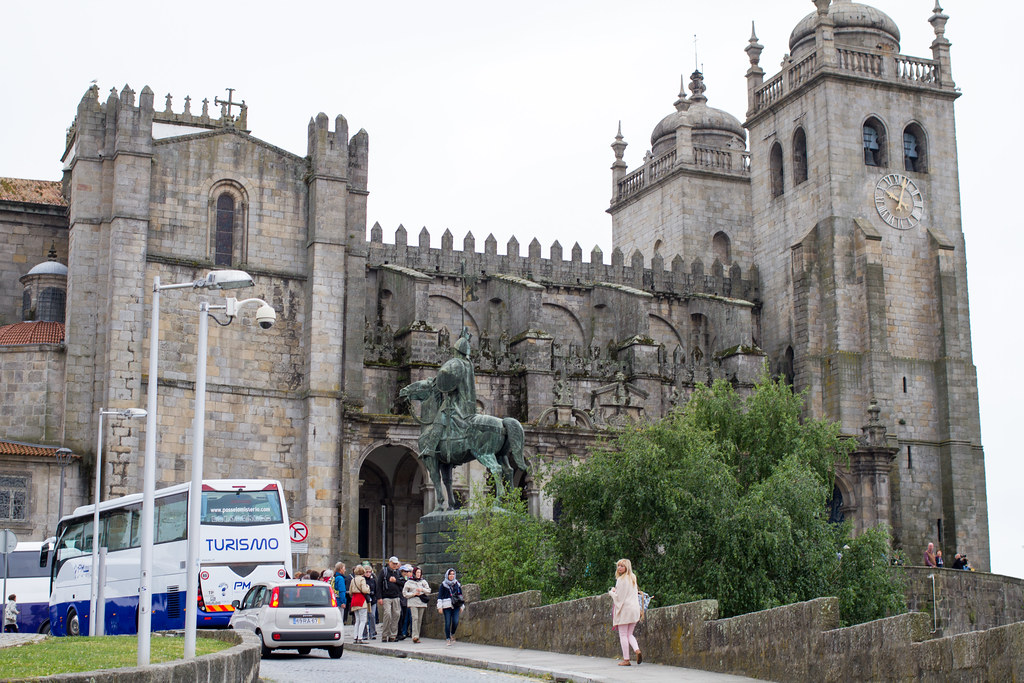 The cathedral was a bit ordinary. But when I looked at the guidebook again, I found that there was a cloister with beautiful azulejos. I had missed it…. It happens often.

The bookshop that was the model for the Harry Potter films

One of the most popular attractions in Porto in recent years is a bookstore called Lelo de Irmalon. 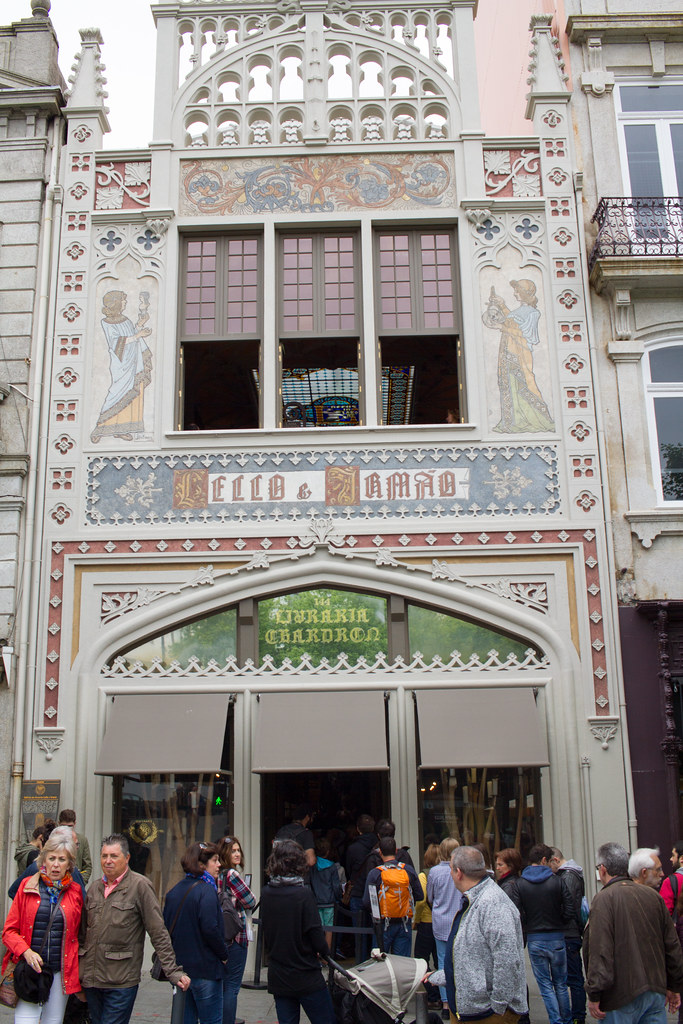 At the back of the newer building of the same bookstore next door, you buy an admission ticket to enter this old building. 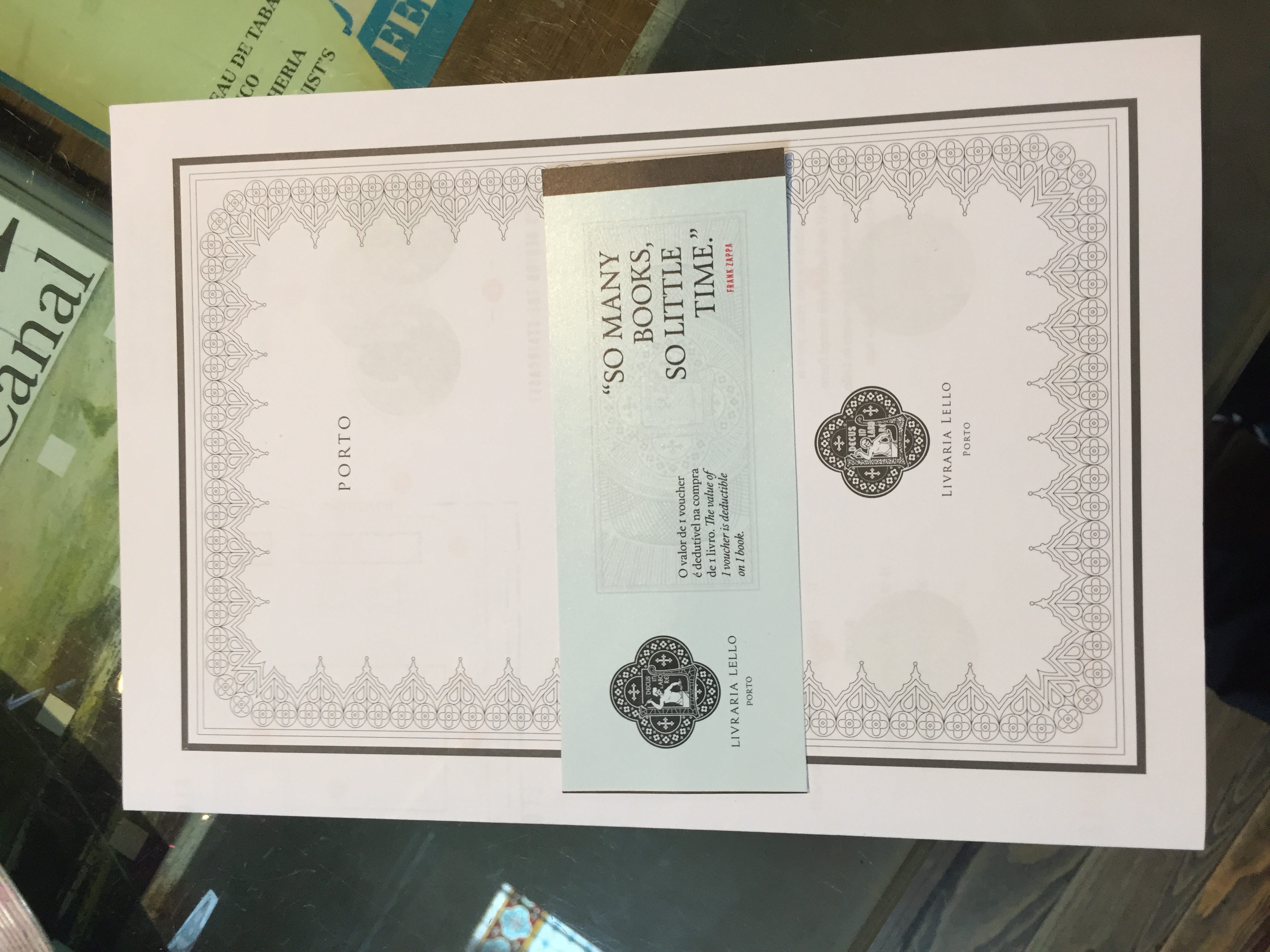 In addition, this is still an active bookstore. It’s strange that you have to buy a ticket to enter the bookshop, but they give you a discount for the amount of the ticket when you buy a book inside. So I bought a Portuguese edition of Lonely Planet here.

In addition, it was very crowded inside, and to be honest, it was not comfortable. 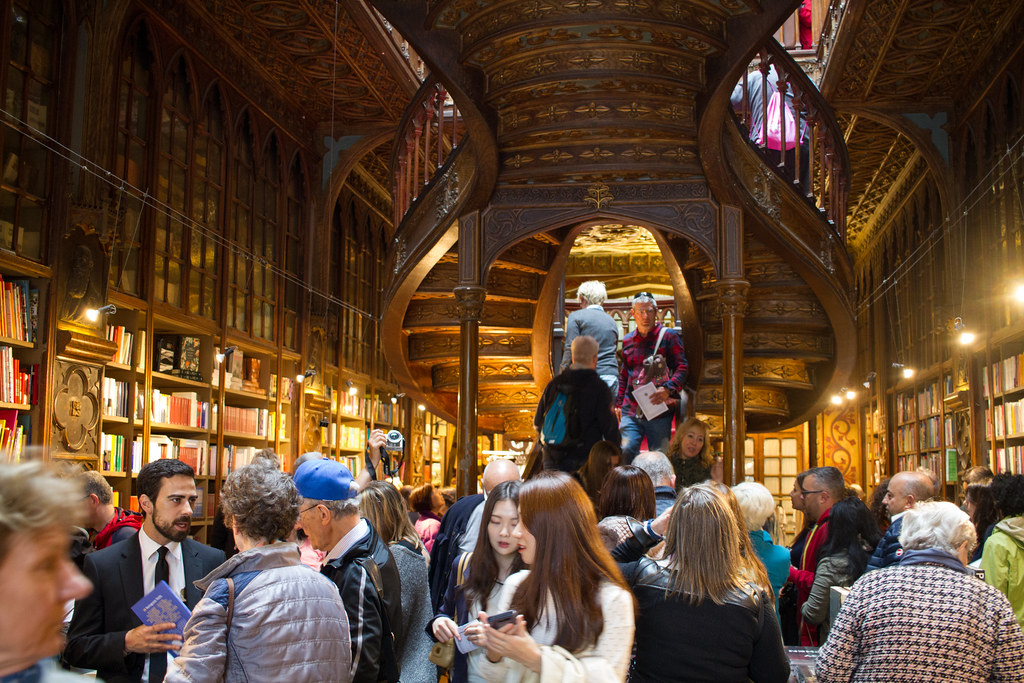 It was a rather disappointing spot. It would be enough to visit once for a memorial.

A tower overlooking the city of Porto

The Tower of Clerigos, located near the top of a moderate hill in Porto, is famous for its particularly spectacular view from there. 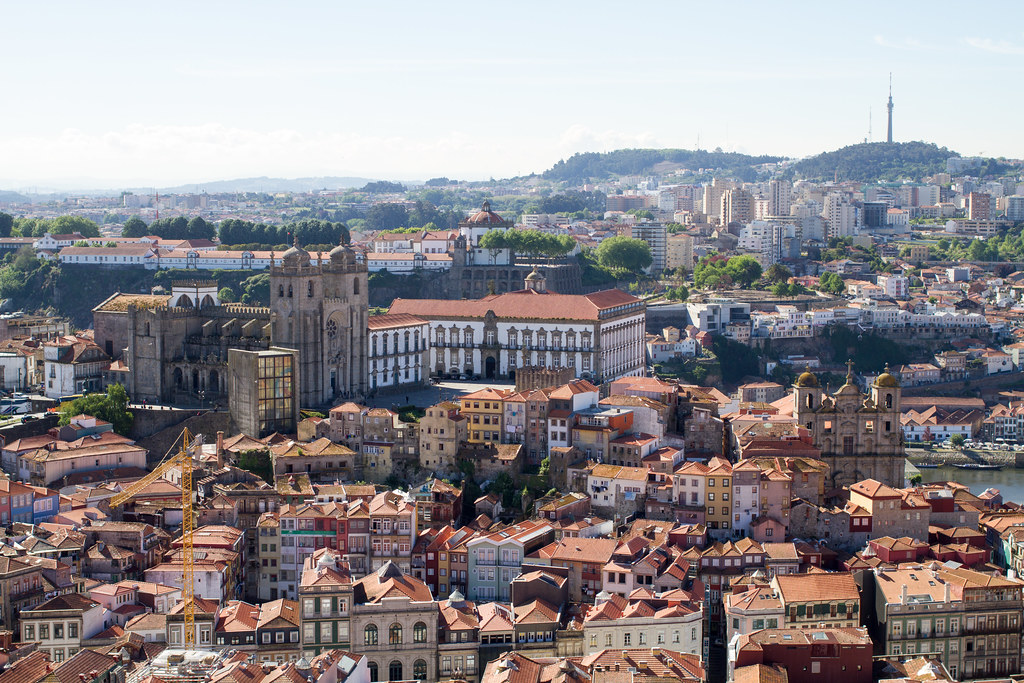 Portugal is famous for its buildings decorated with beautiful azulejos. There are many azulejos decorated buildings in Porto. 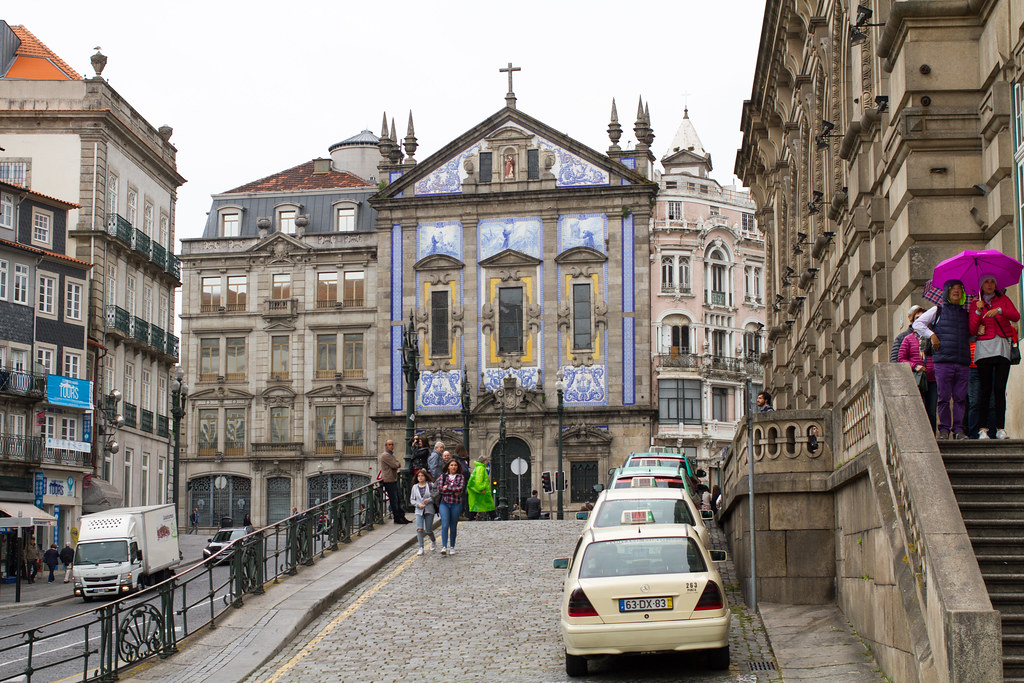 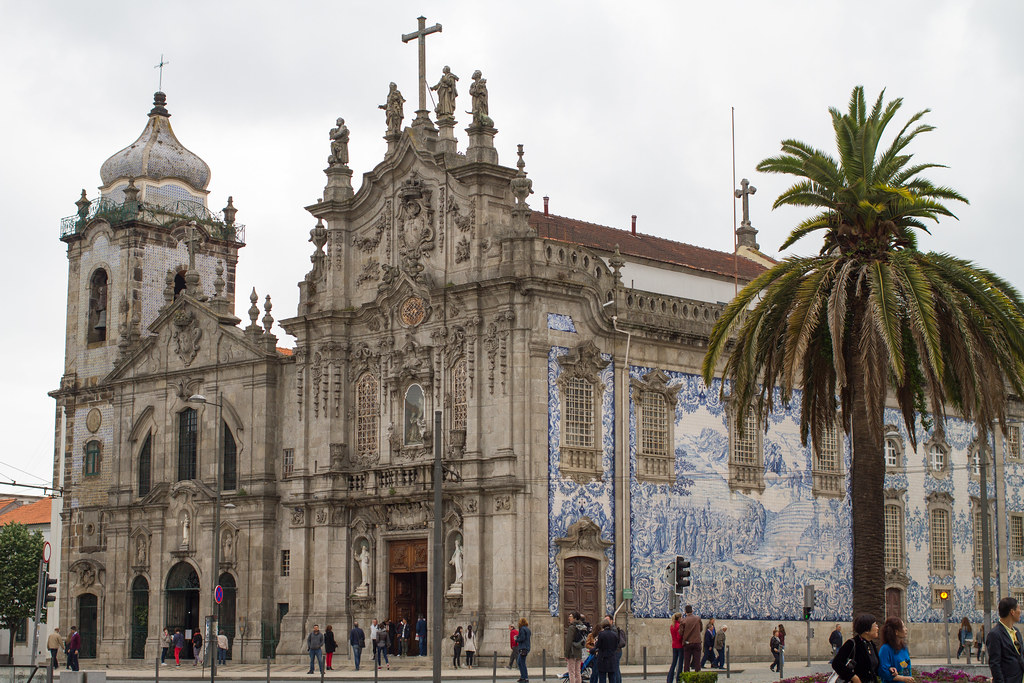 The representative one is “San Bento Station”. Many people were taking pictures of the azulejos spread throughout this structure. 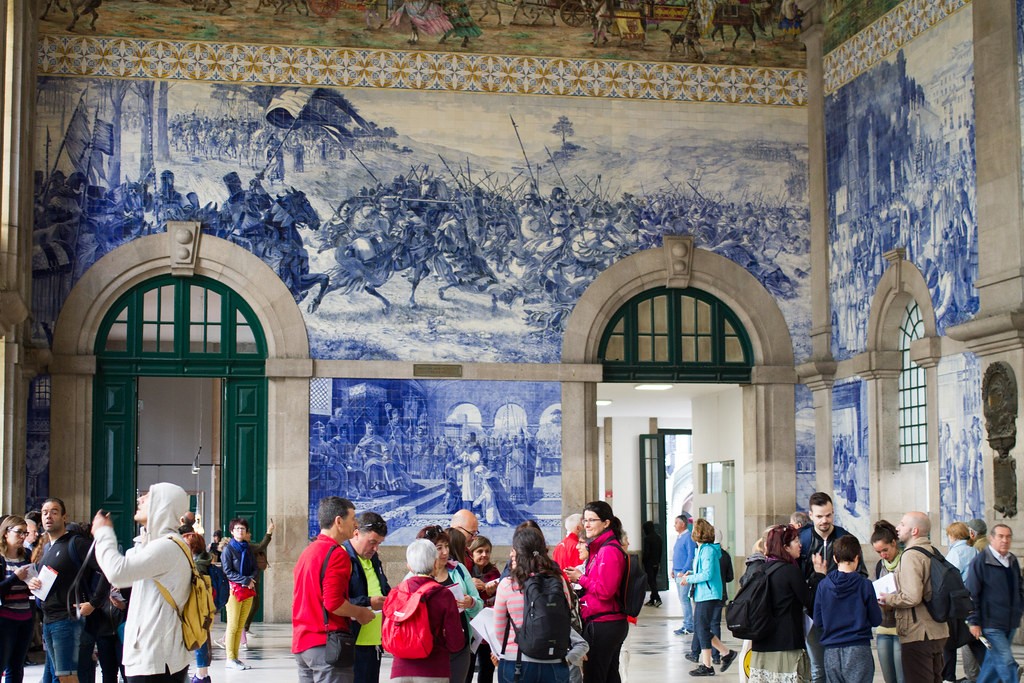 I was visiting this museum because it is the oldest museum in Portugal. Actually, Porto, there are not so many museums. It’s a bit disappointing. It’s a bit far from the center of the city, so it was sparsely populated. But thanks to that, I was able to enjoy the museum slowly.

The center of the exhibition was a painter from Portugal. As far as I could see, they were following the royal style of each period, which can be seen in many European countries. 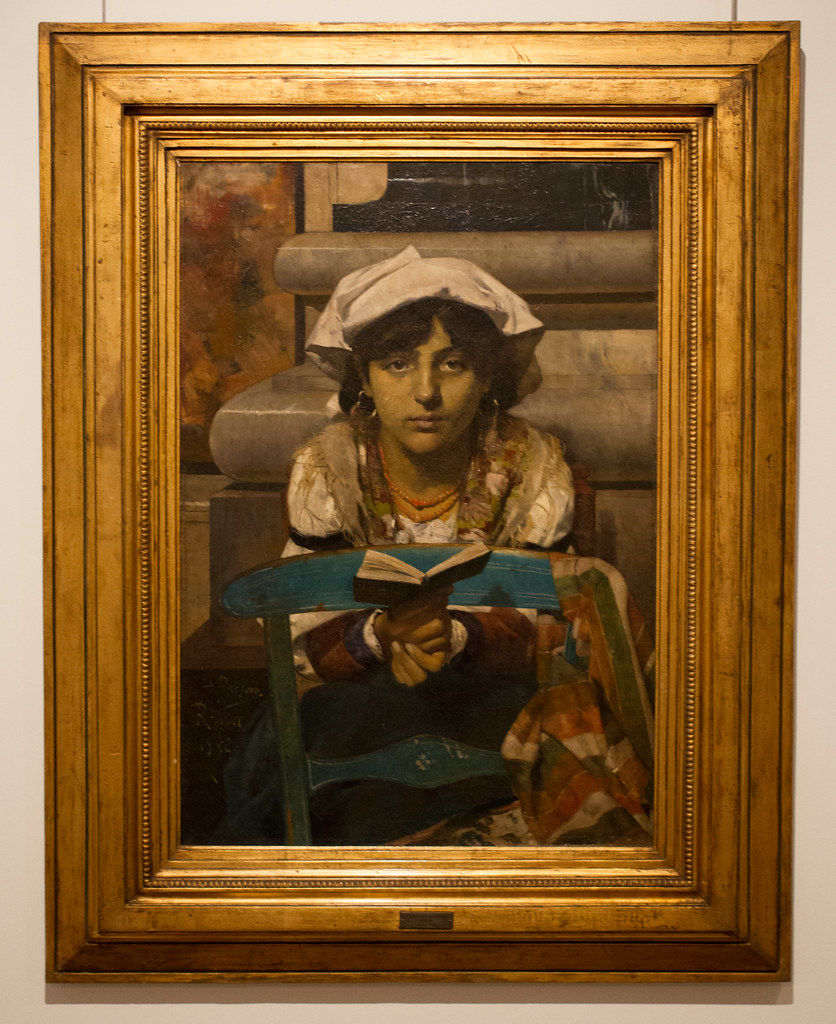 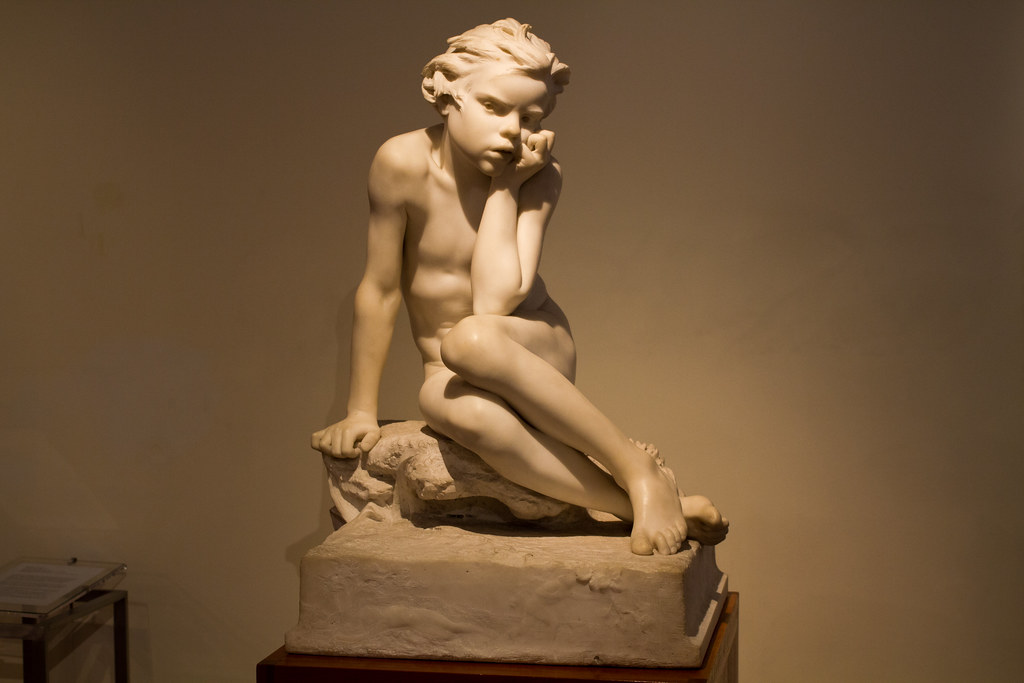 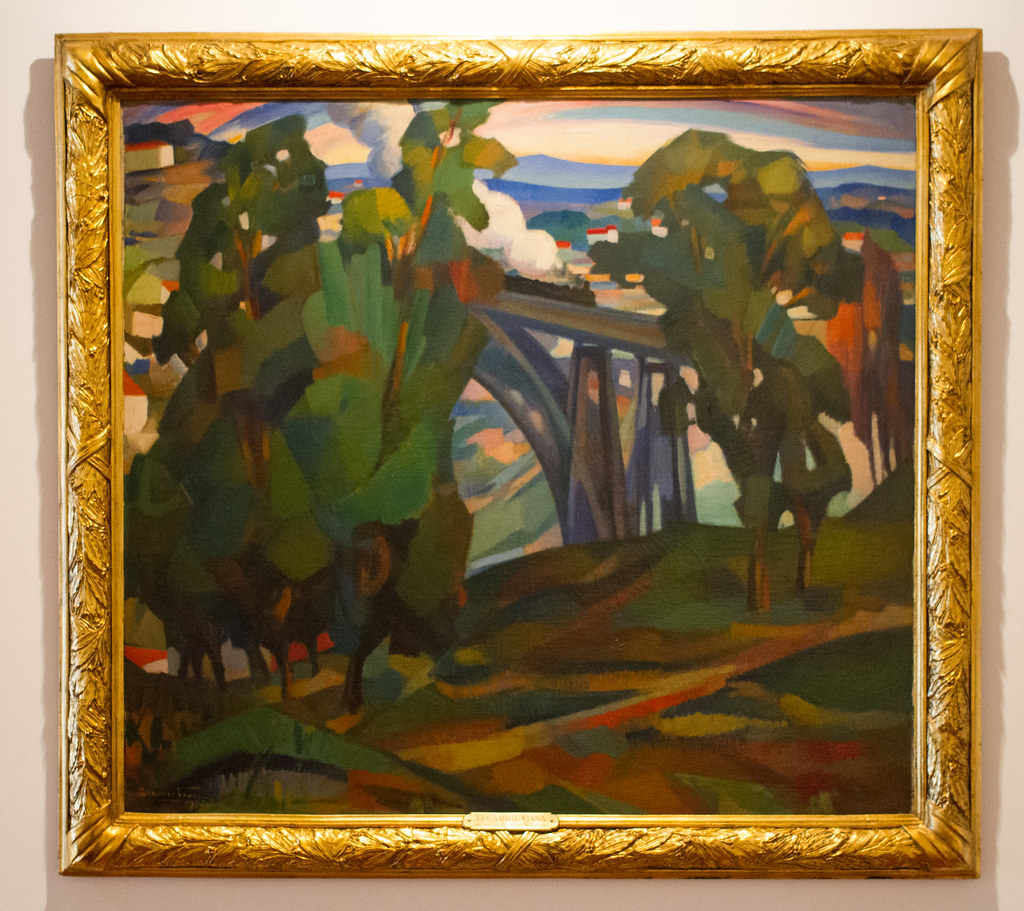 The biggest attraction of the museum is the Japanese Nanban folding screen. Although there were few people in the museum, this place was the most crowded. 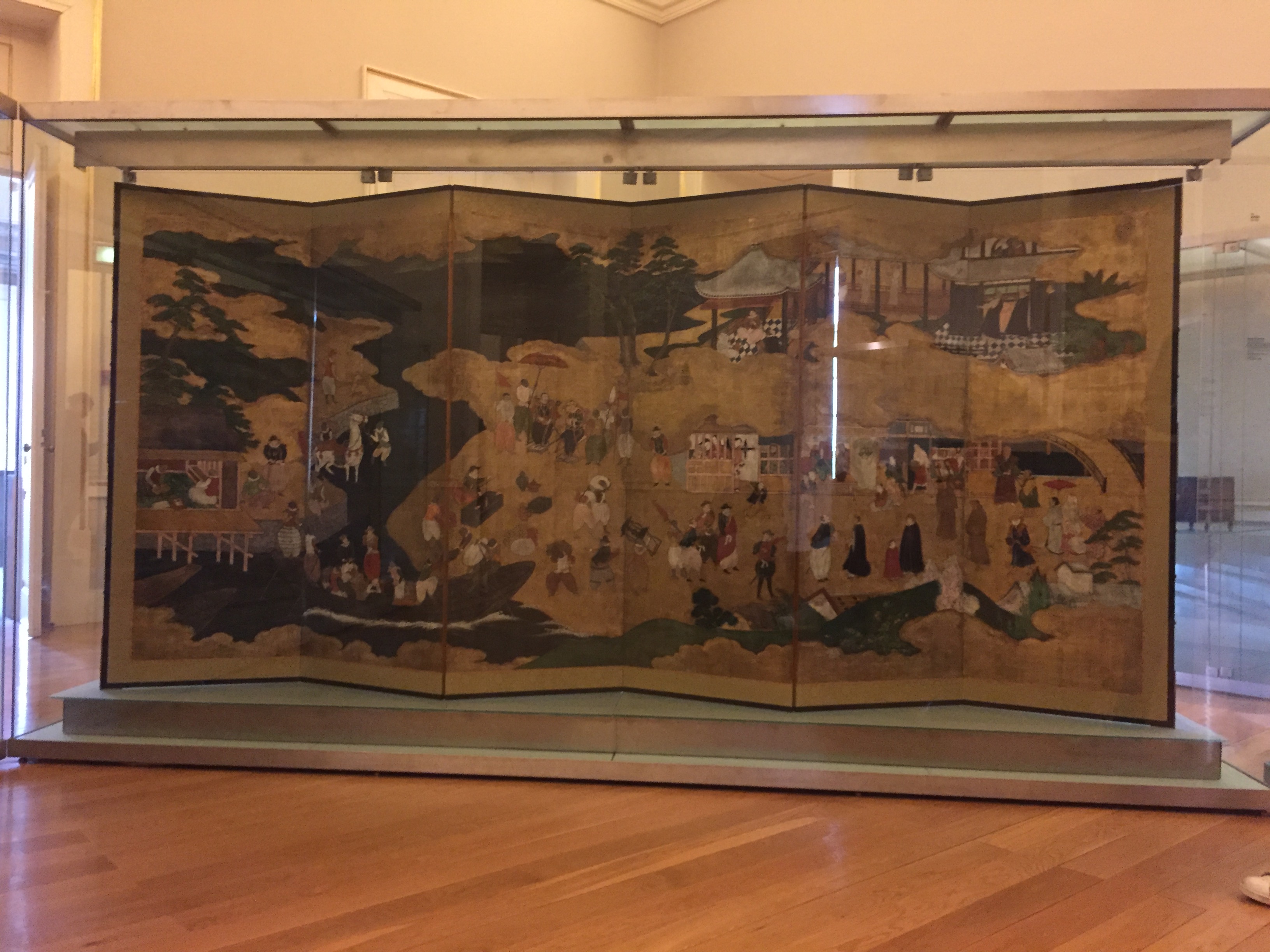 It was indeed a brilliant piece of work.

In addition, there seems to have been a modern art museum in the suburbs of Porto. After all, you have to stay 3 or 4 nights to do a good sightseeing including the suburbs. But don’t worry, I’m sure I’ll be back!

Across the Douro River, on the other side of the old town, are a series of Porto wine cellars. There are many cellars, big and small. I went to the biggest and most famous one, Sandeman. 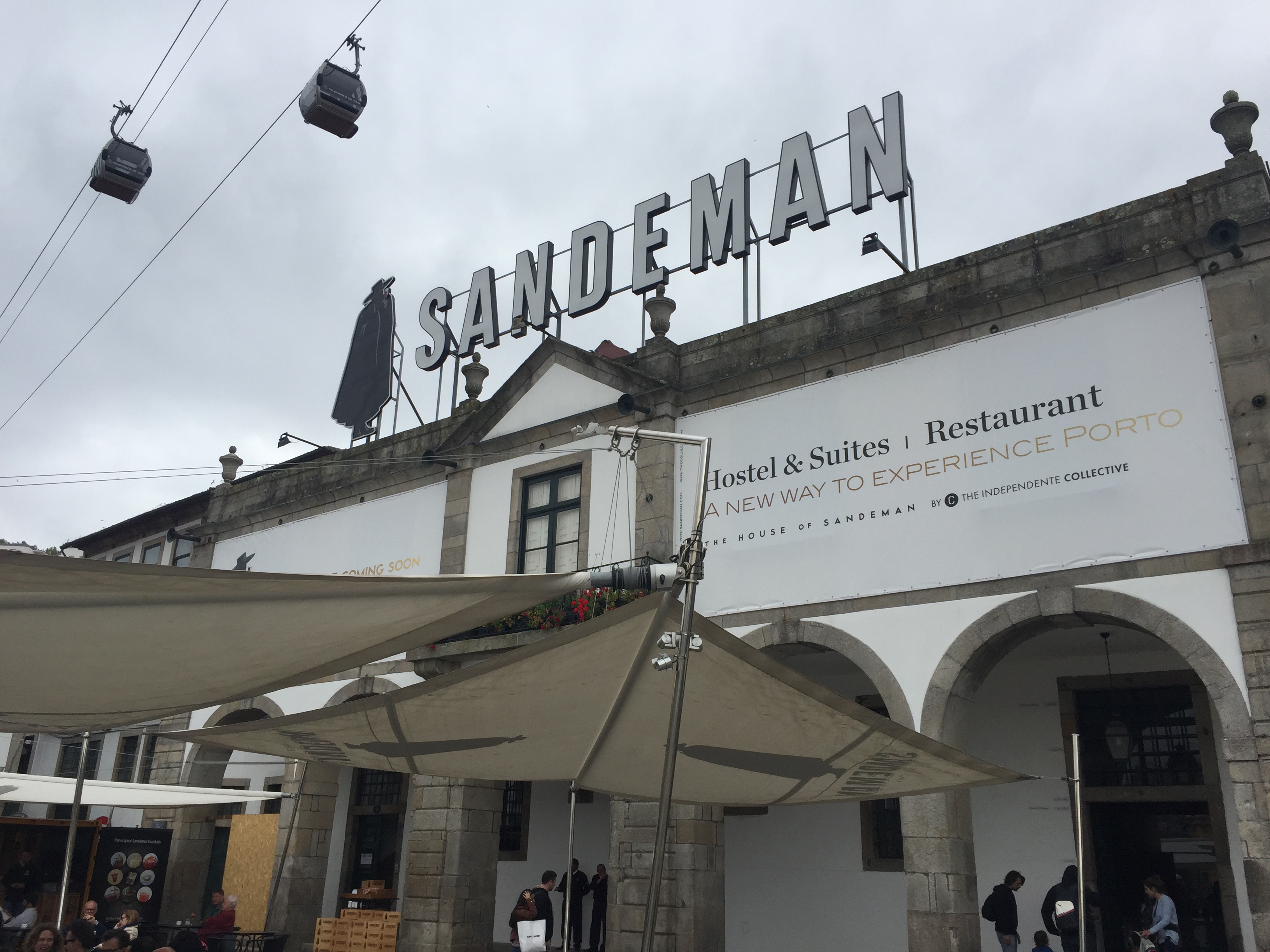 You can apply for tours such as a cruise on the Douro River to visit vineyards, etc., but I was planning to go there by car by myself later, so I went inside to buy only souvenirs.

In addition, it is not possible to enter the souvenir shop directly. I told the receptionist who applied for the tour that I only wanted to do shopping, and I was able to go inside.

Porto is not a very big city, so you can enjoy just walking around. It is a very attractive city for those who like walking sightseeing in the city rather than so-called resort type sightseeing. 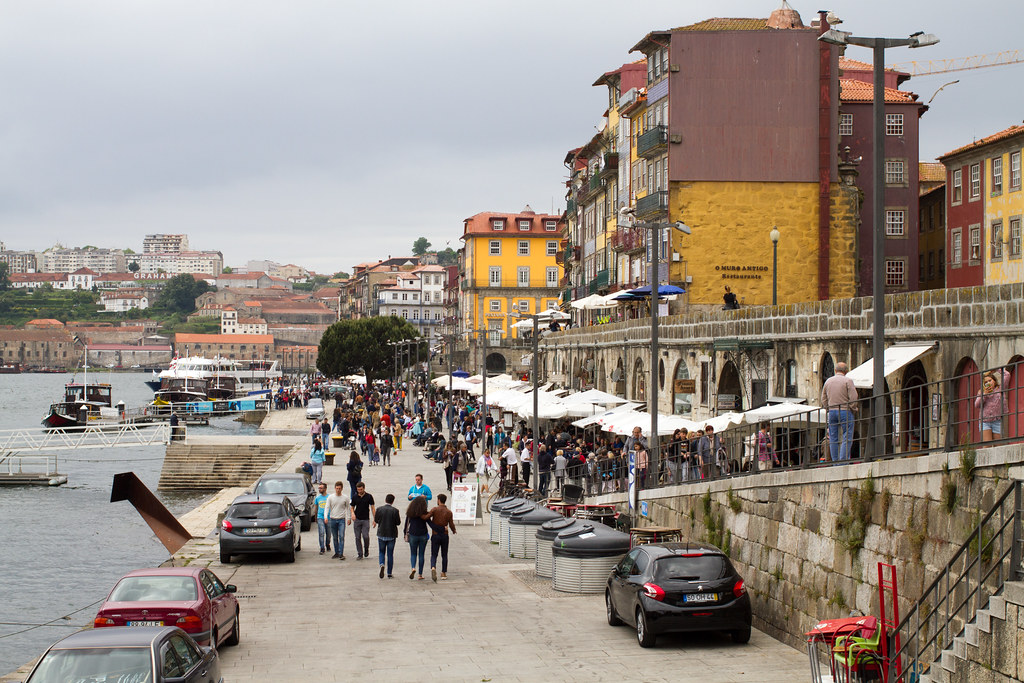 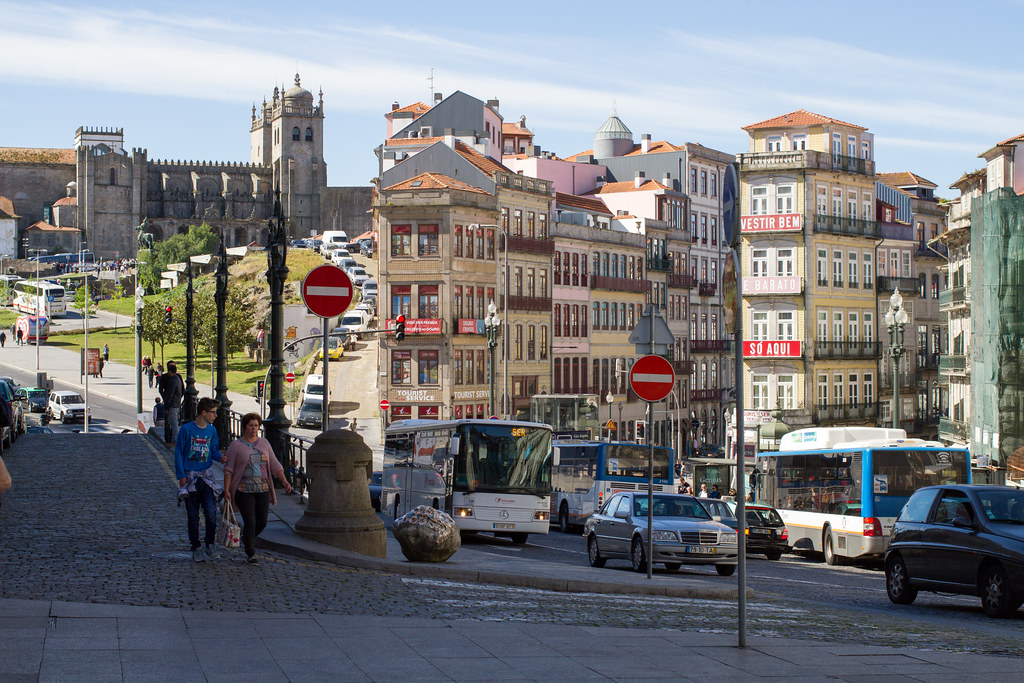 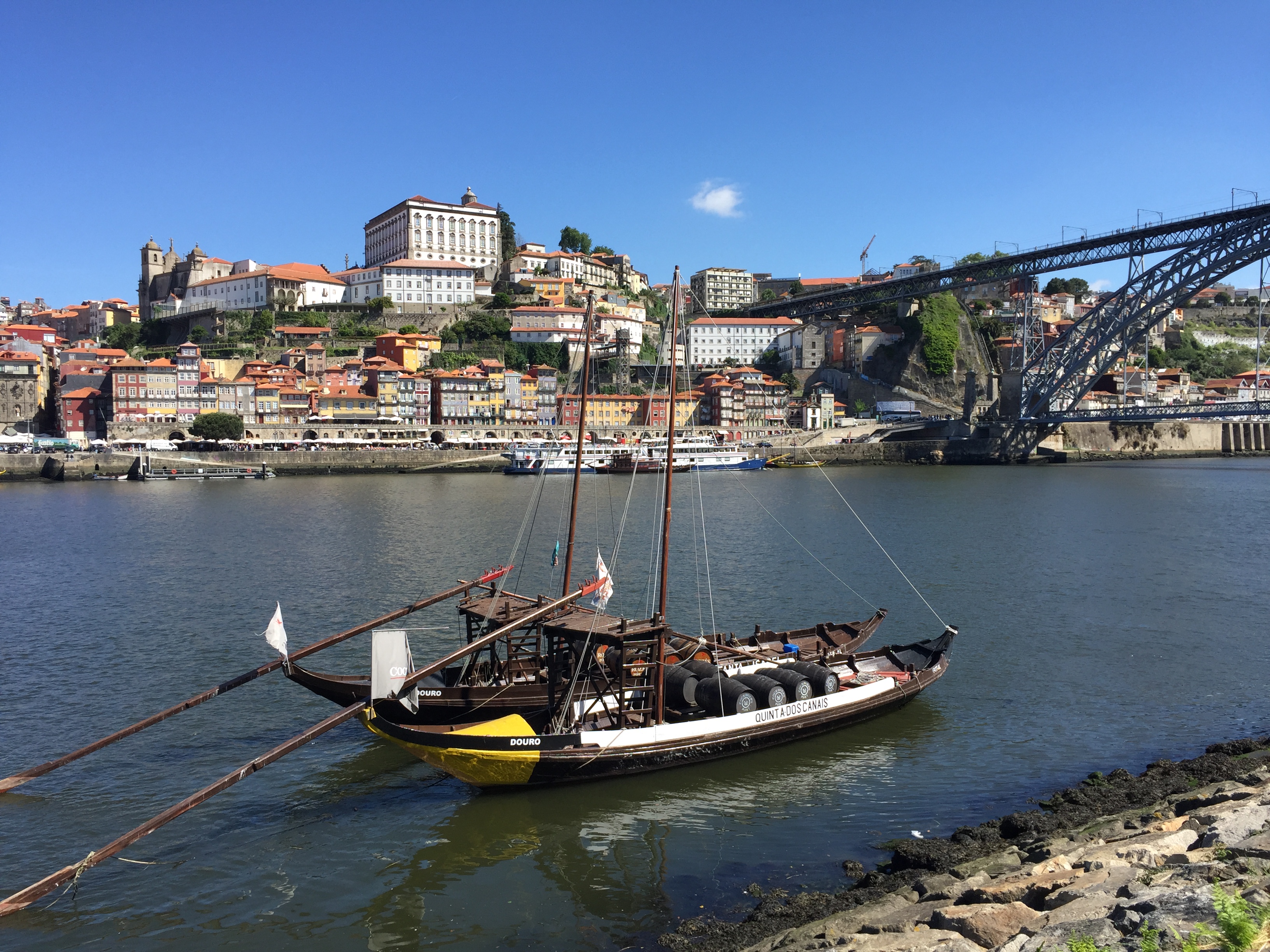 Just after I arrived, I fell on a steep slope and twisted my right ankle, but fortunately I didn’t have a bruise and had some pain, but I was able to spend a total of three days there smoothly. Porto is a small city and it was very easy to visit. And above all, the wine, Porto wine was delicious! It has definitely joined my list of cities to revisit.

Date of visit: May 15, 2012, around midnightWe entered Castilla y León from La Rioja under the clearest skies of the tri...

April 2017 Travel to Western Spain and Portugal Part 4: Other Places to Visit No. 8 – Historic Centre of Santarém

World Heritage Site: 3 castles, defences and ramparts in the old town of Bellinzona: Switzerland and France Travelogue No. 6, September 2017

April 2017 Travel to Western Spain and Portugal Part 4: Other Places to Visit No.10 – Cape Roca

Date and Time of Visit: May 1, 2017, approximately 10:00 a.m. Cape Roca is so famous as the westernmost cape of the ...
April 2017 Travel to Western Spain and Portugal Part 3: World Heritage No.3 – Historic Centre of Porto Part 1
Buy Amazon Kindle Fire HD 8 Tablet for in-flight use on China International Airlines
Home
April 2017 western Spain and Portugal of the journey
Copied title and URL